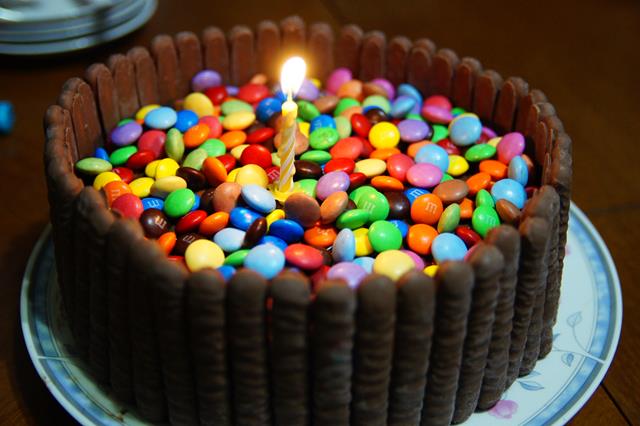 Chocolate is the answer – who cares what the question is?

Fresh off a very inspiring red velvet cake baking class, I decided to be adventurous and try a more decorative cake than I usually attempt for my dad’s birthday. After all, it’s a birthday cake, and what better occasion is there to enjoy a fancy cake?

After an hour of googling “birthday cake recipes”, I found this recipe from GoodToKnow and knew that I had to try it – it looked both manageable but still screamed “special occasion!” I modified it slightly though, with somewhat mixed results.

One thing I like about this recipe – the very limited number of ingredients required! 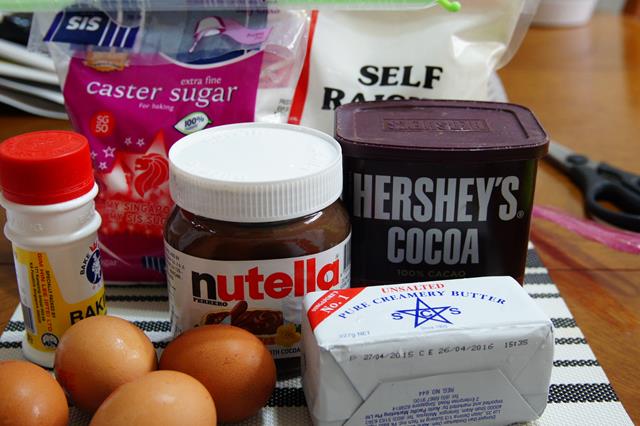 Pre-heat oven – on my oven I pre-heated it at about 170°C but that was too hot as the cake formed a bit of a crust on the top and sides and cracked at the top. I adjusted it to 160°C, and then to 150°C during the baking process but the damage had already been done. I would probably start at 160°C the next time.

Line 8″ cake tin(s) – some recipes call for both greasing and lining, but I’m always too lazy and just line the tins around the sides and at the base. This is a two-layered cake so I could have either baked it in two tins or one and subsequently cut the cake in half to get two layers. I decided to do the latter as I only have one cake tin, but my cake ended up flatter than the picture in the original recipe, so I might invest in another cake tin going forward and see if it makes any difference!

The original recipe called for the all-in-one method of just combining all the ingredients in one bowl and whisking it, but I am paranoid about overmixing the dry and wet ingredients as I have created more than my fair share of rock-hard cakes and muffins, so I decided to cream the butter and sugar first. 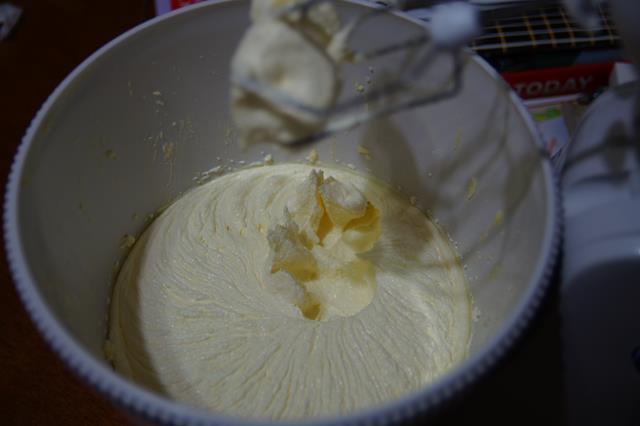 And then I added the eggs one a time, mixing until combined before adding the next: 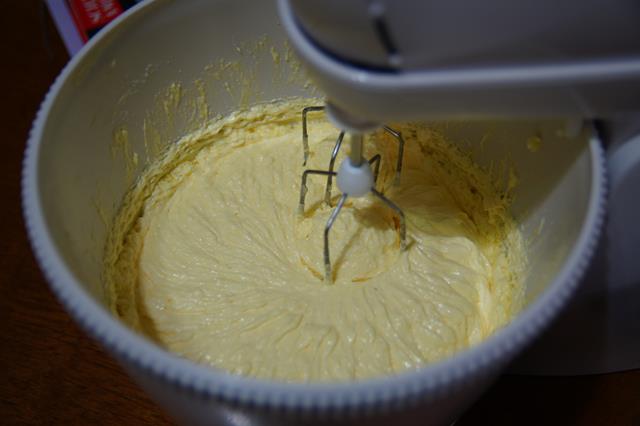 The resulting butter-sugar-egg mixture. I noticed that the recipe didn’t call for any milk but left it at that since I didn’t have any milk on hand anyway.

Next, sifting the flour, cocoa powder and baking powder. Sifting cocoa powder is possibly my least favourite part of baking because I always end up with these huge lumps of cocoa and it takes forever to flatten them. This is more of a problem with the Hersheys than the Vanhouten, for what it’s worth – the darker brown powder in the picture below is the Vanhouten. 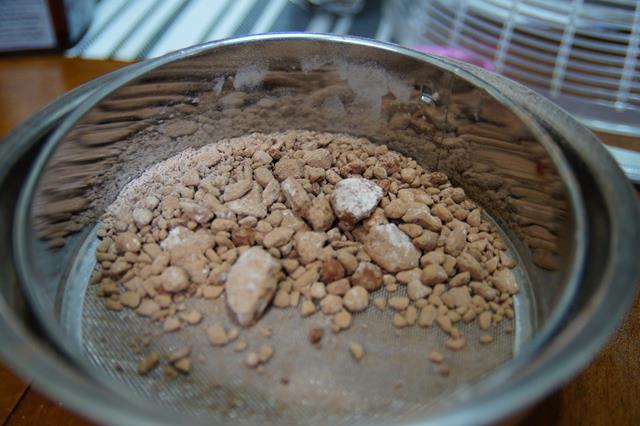 I also hate sifting brown sugar but that’s another story…

Next, I used the electric mixer to whisk the dry ingredients with the wet ingredients until it looked like this: 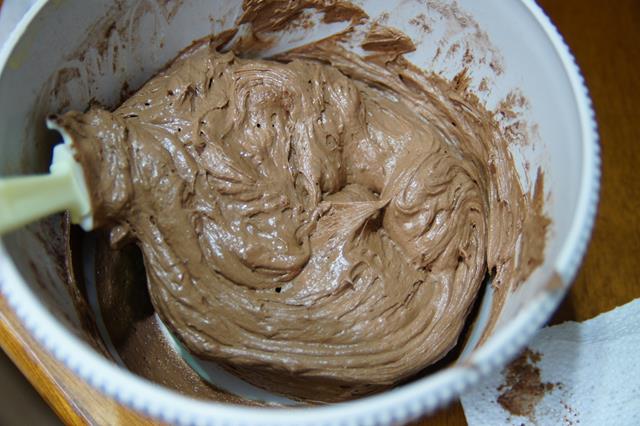 The batter was pretty thick. 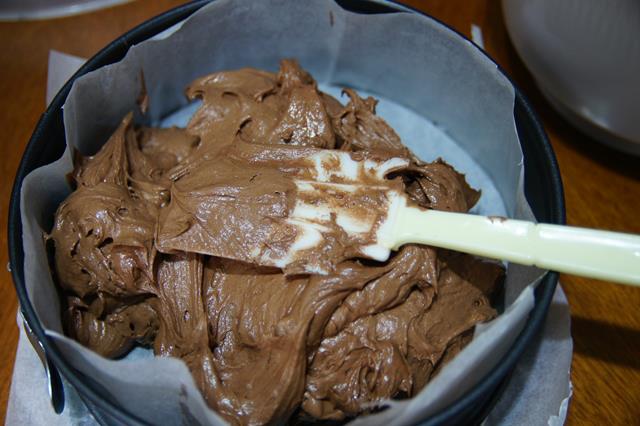 I baked the cake for about 1 hour. 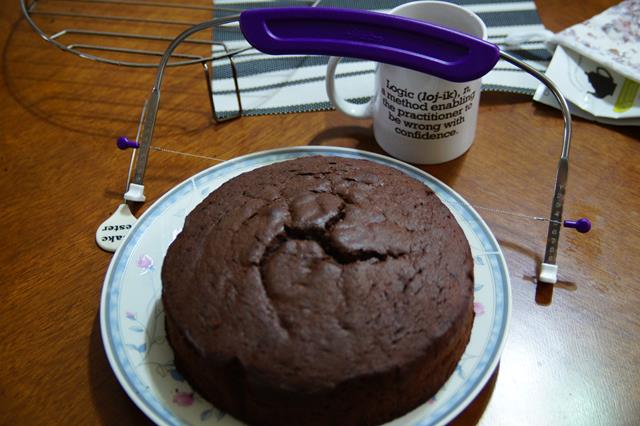 After the cooling the cake for a bit, I then used my Wilton Cake Leveler to cut the cake into two layers. This tool is awesome, by the way – it’s so easy to use and you’re ensured a horizontal cut!

Unfortunately, the cake hadn’t cooled enough and when I picked up the top layer, it split into two (is this also a function of the cake not being moist enough?) 🙁 So I left the two layers to cool further on a rack. You can see the crust around the sides here. 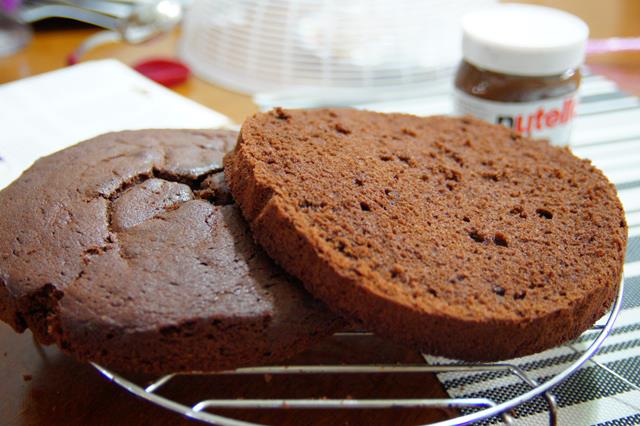 When they were cool, I spread the Nutella on the bottom layer and sandwiched the top layer over it. I also attempted to “glue” the two top halves back together with Nutella, which seemed to work. 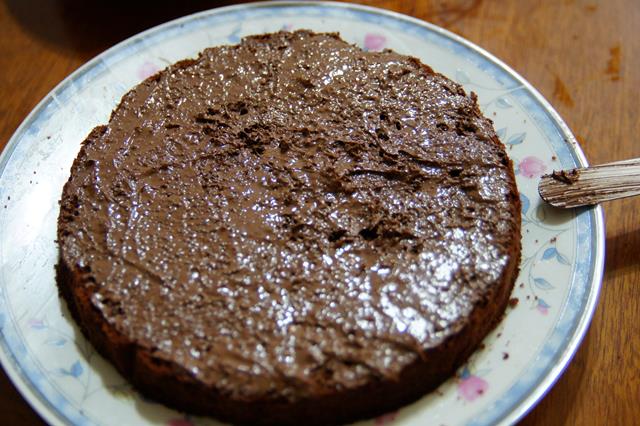 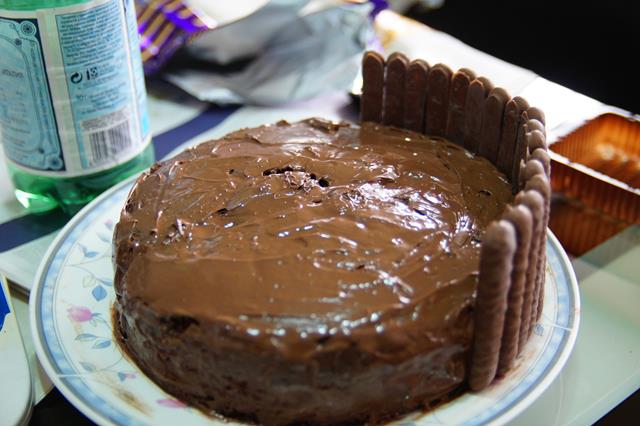 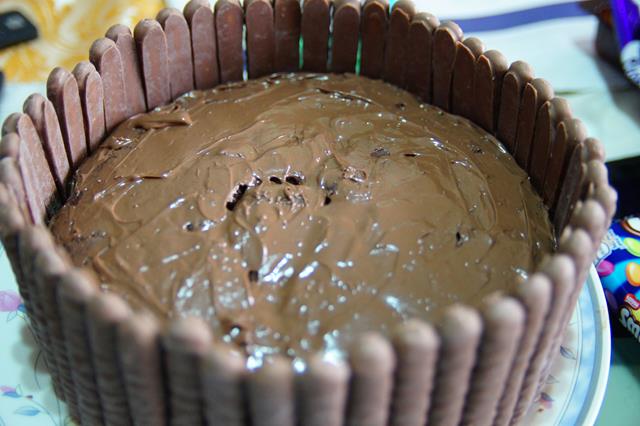 Finally, what was possibly the most fun part: decorating the top of the cake with M&Ms and Smarties! 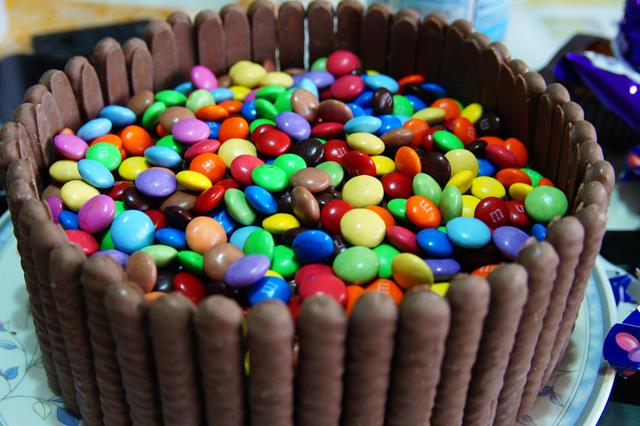 I really love the way this cake looks, although I do wish it had been taller. But the bright colours of the M&Ms and Smarties make me really happy just looking at the cake!

The cake itself was a bit dry, I felt, although my family insisted that it was fine. My chocolate cakes always turn out a bit dry and this is a source of great consternation for me, considering how much I love chocolate. 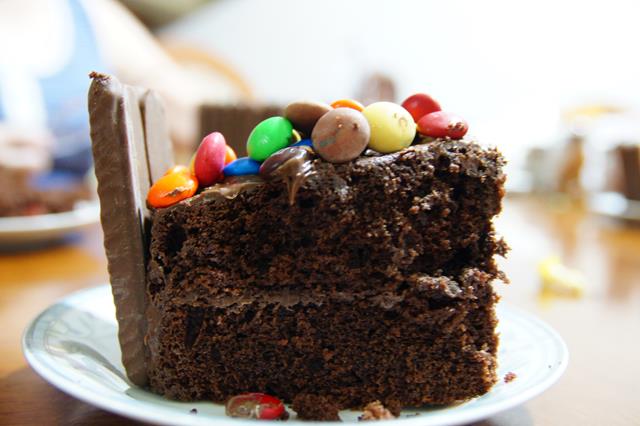 What do you think? What could I do next time to improve the texture of the cake?

If you want one of those really moist cakes, you can add oil and vinegar.. it sounds weird but works

Won’t it turn a bit sour if you add vinegar? Will try that next time! Gracias =)

I never felt the vinegar in this kind of cakes, maybe because it’s a very little amount, but some bitter on the chocolate it`s maybe not a bad idea