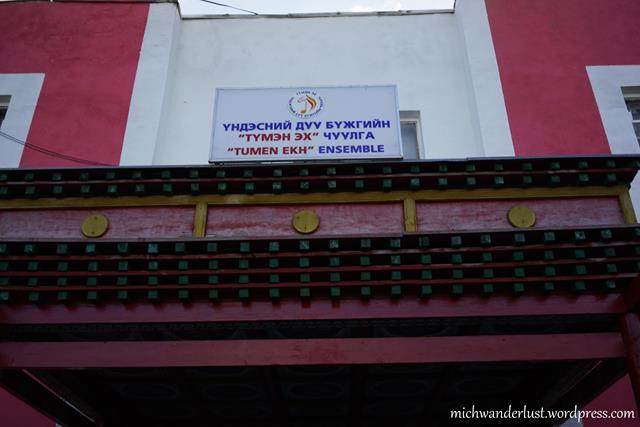 We spent 3 days in UB in total but did almost all of our sightseeing in one day, during the city tour given by Davaa. And as far as one-day city tours go, it was fairly relaxed – we covered the monastery, the museum, had lunch, visited the Zaisan memorial and arrived back at the hotel by 4+ in the afternoon. We even had time for a quick nap before going to watch a 6pm performance by Tumen Ekh, which I highly recommend any visitor to UB to check out.

The performances as a whole were flawless and the performers were obviously very skilled, but these 3 segments made a particular impression on me:

If you want to create singing harmonies, you would usually need at least two people – one to sing the melody, and one to sing the harmony. In school choirs, for example, each choir member has his or her own part to sing and when all their parts are combined, a beautiful harmony is produced (or at least that’s the hope!).

But what if a person could, by himself, sing both the melody and the harmony?

Mongolian throat singing does just that, with the singer producing multiple pitches simultaneously. There is a base or fundamental pitch which sounds (to my ear) like a person with a fairly deep voice singing, and then there is a much higher pitch which sounds like whistling. The first time I heard throat singing, all I noticed was the fundamental pitch. Then, after a while, I started hearing a fainter, much higher sound in the air which had a tune that was all its own – it sounded like it was coming out of everywhere and nowhere and couldn’t possibly be emanating from the same deep-voiced person singing. But it was, in fact, coming from him.

The Youtube video below shows the very talented Tumen Ekh throat singer whom we had the privilege of watching. The magic is still there for me when I watch the video – do you feel it too?


The shaman dance (and costume) are also a sight to behold, aren’t they?

The morin khuur (horse head fiddle) is such a unique instrument. With the head of a horse and strings of horse hair, it is one of the iconic symbols of Mongolia. When we were wandering around Chinggis Square at night, we saw two men playing this instrument (should they be considered buskers if they didn’t seem to be soliciting money from onlookers?). As one who loves horses, a fiddle in the shape of a horse is obviously very appealing and it’s so appropriate for this country, where horses were and still remain an integral part of the national identity.

The morin khuur features prominently in Tumen Ekh’s musical ensemble – there are three of them in the video below! Can you spot all three?

Even the music is evocative of horses – if you close your eyes and listen to it, isn’t it the perfect soundtrack for galloping across the steppes with nothing and nobody in your way? Just you, your horse, the grass, the mountains and the sky.

I was also extremely impressed by the lady playing the dulcimer in the middle. The keys are very small and therefore a great deal of precision is required to hit the exact key you want, but there she was merrily playing with a good deal of aplomb without even needing to look at the keys. You can see her lifting her eyes up and looking around for a good few seconds during the song.

This performance seemed to be a crowd favourite, and no wonder too. It’s always amazing to see what the human body is capable of. I was completely blown away by how flexible these girls are. If I ever have a daughter, I am definitely sending her for gymnastics classes. Flexibility and the ability to do a split (neither of which I possess) are very impressive life skills, right?

As with many other places in UB, you can only take pictures or videos during the show on payment of an additional fee. I’m not sure how much the fee is since we didn’t pay for it, but if I were to do it all over again I’d definitely spring for it.

One other tip: it’s free seating, so try to come as early as possible to grab good seats. 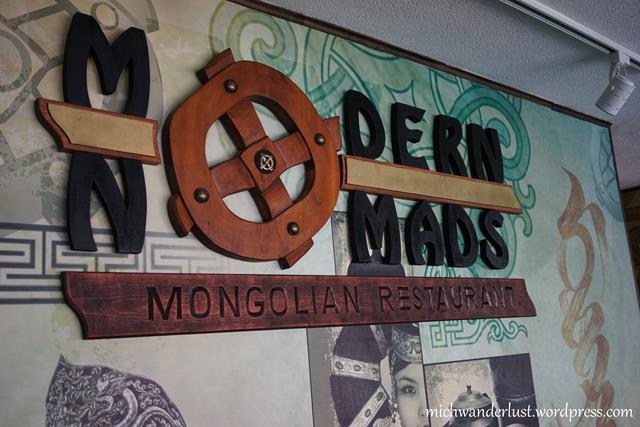 Modern Nomads seems to be the place to go if you want traditional nomadic Mongolian food. Davaa brought us there for lunch and it was separately suggested to us by a Mongolian friend.

The decor itself is certainly worth the trip: 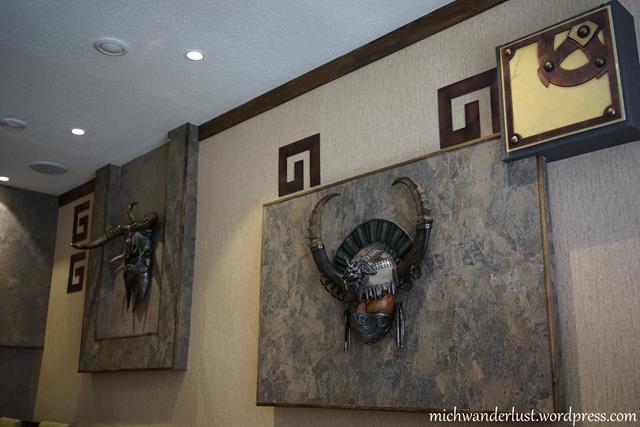 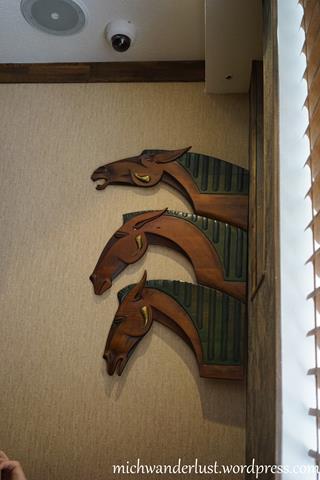 Mongolian food is very meat heavy – beef and lamb seem to be particular favourites. Ian had a meat platter which consisted of beef, lamb, horse meat and pork and there was so much meat that it all started tasting the same after a while. I had khuushuur (fried meat dumpling) and steamed dumplings which would have been nice, except that I have a really low tolerance for lamb. I generally avoid lamb but before that meal I hadn’t realised exactly how little lamb I can eat before I start feeling sick! However, if you are a meat lover, then this is definitely the cuisine for you.

I also had suutei tsai (Mongolian salty milk tea). Yes, salty tea. Apparently it helps with dehydration? The level of salt in the tea varies across the different regions in Mongolia but the one I had was alright for me – it has a really interesting flavour actually. I wanted to buy some instant suutei tsai powder to bring home but all the teas in the supermarket were labelled in Cyrillic and I had no idea which one (if any) was suutei tsai. (I bet there are phone apps for this kind of situation.)

There are a few branches around UB and they have free wi-fi  – big bonus for us!

We also ate at Bluefin, a fairly new restaurant near Chinggis Square, a couple of times. Bluefin does more international cuisine (steak, burgers and even sushi) and seems to be very popular. Our Mongolian friend recommended it as well.

Given that we were in Mongolia, where cows are plentiful (and accordingly, so is beef), Ian ordered the Mongolian tenderloin steak both times. The first time we went, he asked for it to be medium rare but it turned out practically well-done. The second time there, he decided to try and ask for medium rare again and it turned out somewhere in between medium and medium rare, which was much better.  But even with the steak being more well-cooked than expected, you could still tell that it was excellent beef. We heard that Mongolian cows are grass-fed and the cows we saw seemed to spend most of their time roaming around and grazing, so it’s not surprising that the beef is of an excellent quality – the kind that people would pay a lot for in other countries, such as Singapore or the US.

And the best part is that it was incredibly affordable – just USD15 (approximately) for a steak of that quality and in a restaurant that was quite fancy. They have an indoors and an outdoors dining area, both of which we tried – I’d recommend the indoors though as the view outside isn’t that fantastic and indoors is just a lot more comfortable.

I tried the pork chop and the teriyaki chicken – both were decent. The pork chop sauce was really tasty but the pork chop had a lot of fat in it, so I ended up leaving a lot of it on the plate. I wish we had tried the burgers, which apparently is one of their specialties, but we only found out after the second visit and by then really wanted to try a new restaurant.  So we ended up eating burgers at restaurant no. 3:

This place is conveniently located behind the State Department Store (which is, as the name suggests, a huge department store) and does pretty decent burgers.

Mongolia is a fascinating country and if you do visit, a few days in UB would be time well spent. You can do lots of day trips from there, for example to see the wild horses (Przewalski’s horse) at Hustai National Park or the giant Chinggis Khan statue. And try not to go in the winter – not only is it freezing (below freezing, to be precise), but the pollution is terrible due to the people living in nearby gers burning lots of coal to keep warm.  I’ve heard you can see an actual cloud of smoke/soot/etc. hanging over UB in winter.

Goodbye for now, Mongolia – there’s still so much of you I haven’t seen. I have a feeling I’ll be back! 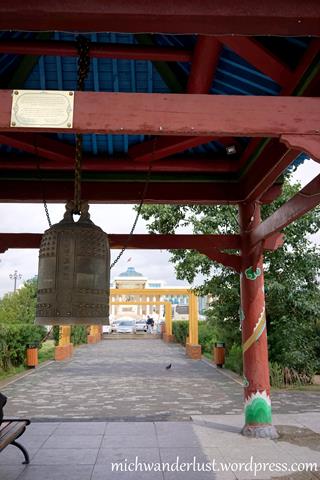 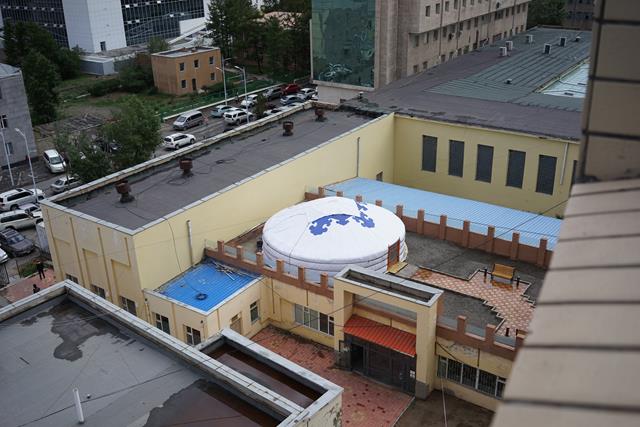 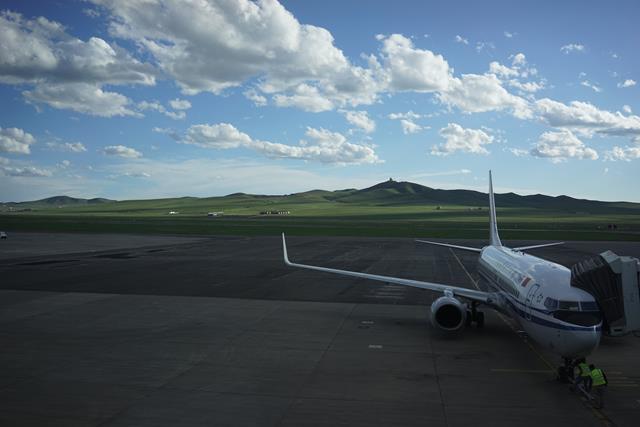 […] Ulaanbaatar was fascinating, but the main reason I came to Mongolia was to ride – and ride I did! We rode out deep into the Gorkhi Terelj National Park for 8 days with Stone Horse Mongolia and it was fantastic. […]

[…] I wanted to cover my UB experience in one post but I still have lots more to say and if your attention span is anything like mine, I’m impressed that you’ve read this far! For Part 2, click here 😉 […]