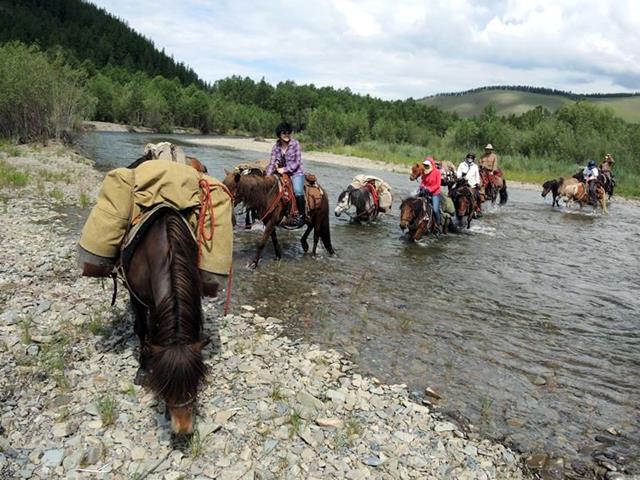 One of my favourite things about this trip? The pace: taking things slow but riding fast. This has got to be the perfect way to live.

We would wake up at about 8am and have a leisurely breakfast before starting to pack up our things for loading onto the packhorses and putting our saddlebags on our horses (tip for future campers: make sure your nails are short! I did so much damage to my nails trying to stuff my sleeping bag and blanket into the dry bag provided).

The first few days I hurried to pack up as quickly as possible so that we could get an early start, but I soon realised that that there was so much other stuff for the Stone Horse guys to pack up and load that there was plenty of time for us to pack our stuff – no point rushing. It was such a luxury not to be in a hurry.

Of course, we trotted a fair bit so we did cover quite a lot of ground anyway. 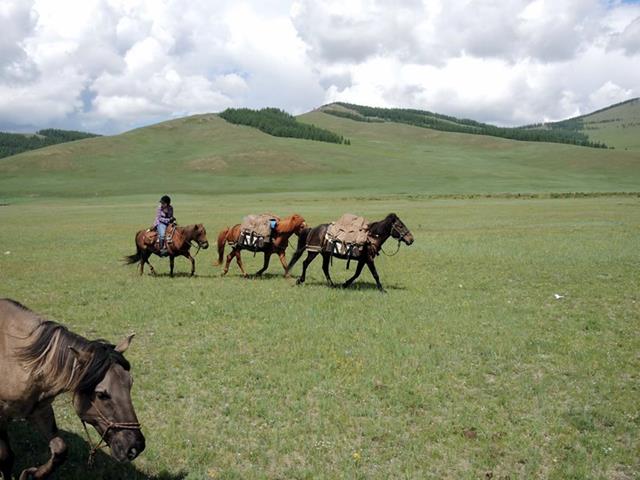 From the second morning onwards I switched horses to Brownie – the nippy brown horse – as one of the packhorses’ withers was a bit swollen so they decided to use Ben as a packhorse instead. Brownie apparently is strictly a riding horse, but most of the other horses can do both. Brownie was a joy to ride, though he didn’t seem quite so keen on cantering as Ben. He had the most amazing smooth-as-water trot though! Relatively speaking, of course – the canter is always going to be smoother than the trot.

I had to keep a close eye on him though as he sometimes tried to nip other horses who got within reach (maintaining the herd hierarchy etc.). Keith and Sabine were fairly sanguine about it and I don’t think it was anything malicious or serious (they do live as a herd, after all), but that didn’t stop me from feeling bad when Brownie caused someone else’s unfortunate horse to jerk sideways.

(See what I mean about keeping my ears covered? It was either riding hat or bandanna, 90% of the time.)

Unfortunately for Brownie (but fortunately for me) he liked to stay close behind the leaders of the herd, who were bigger and had longer legs than he did, so when they were going at a fast trot he had no choice but to start cantering in order to keep up. I managed to do a fair bit of cantering that way! I did feel sorry for him though – short legs is a problem to which I can relate. 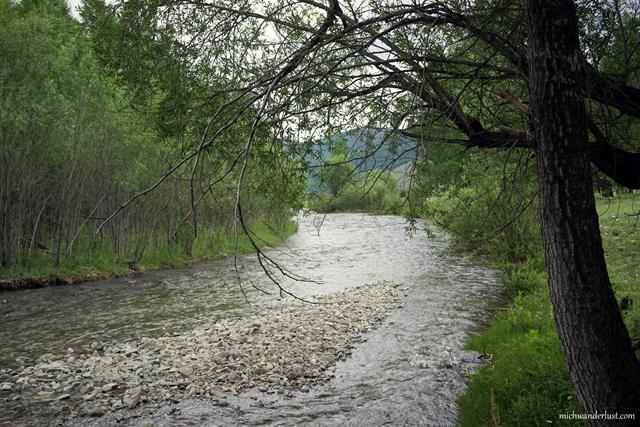 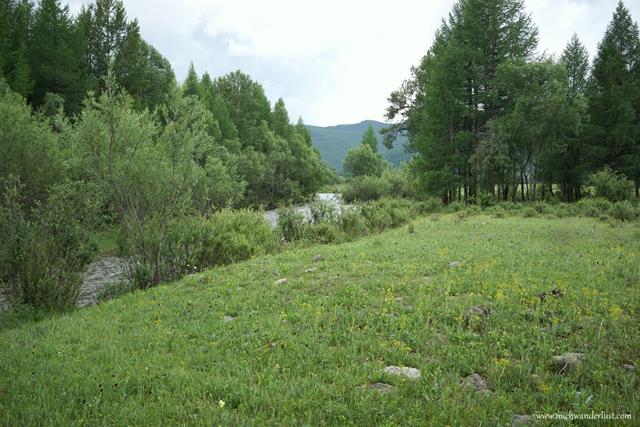 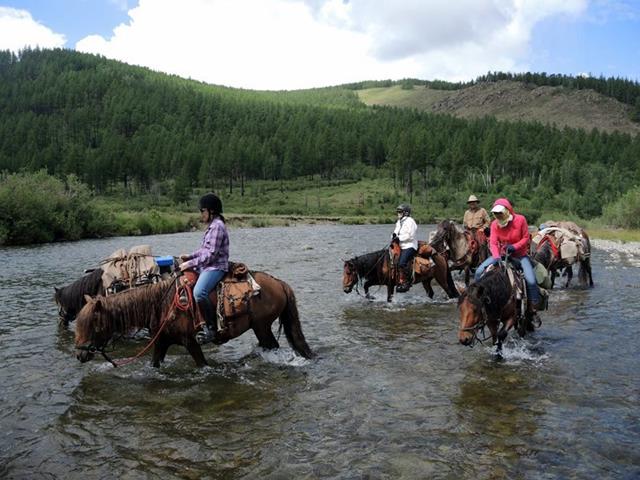 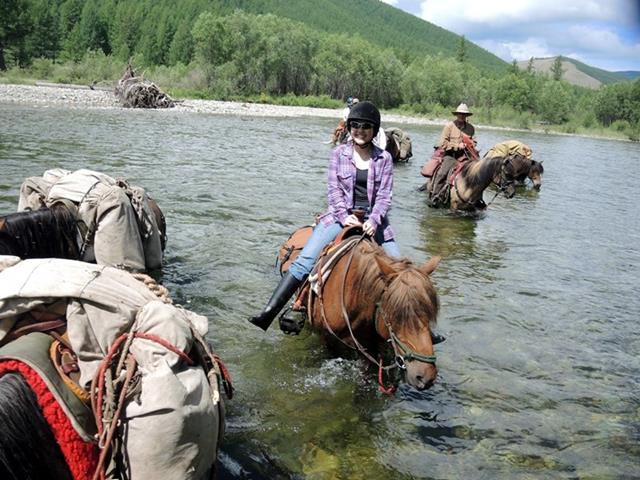 I was incredibly impressed at how good these horses were at navigating the river crossings. Not only did they have to contend with currents that were at times very strong and water that was very cold, they had to navigate the stones on the riverbed – I waded in a stream with flip-flops on and those stones were both painful and slippery!

On top of all that they were able to cross in water that went all the way up to their chest, as you can see in the picture above. Trucks and other vehicles wouldn’t have been able to cross – in fact, we encountered some people that very day who had attempted to cross in a truck and gotten stuck. Horses 1, vehicles 0. 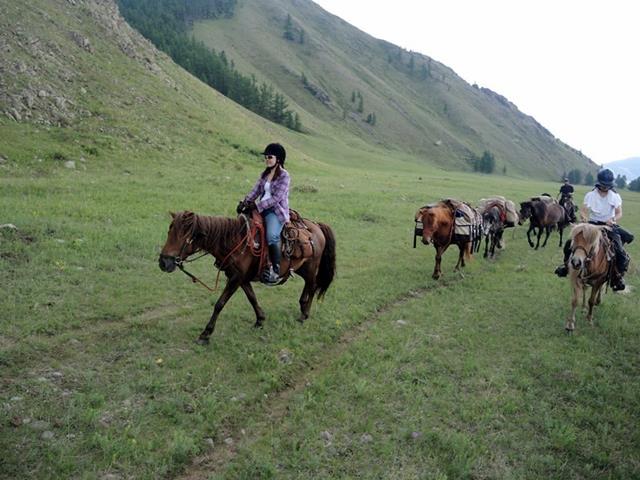 It rained again so there were a couple of stops to put on and take off our rain gear. Waterproof clothes are essential on this trip! I bought a cheap pair of waterproof over-trousers and a rain jacket from Decathlon and it worked just fine, but on top of that Keith also gave us each a duster which helped to keep our saddlebags dry as well. 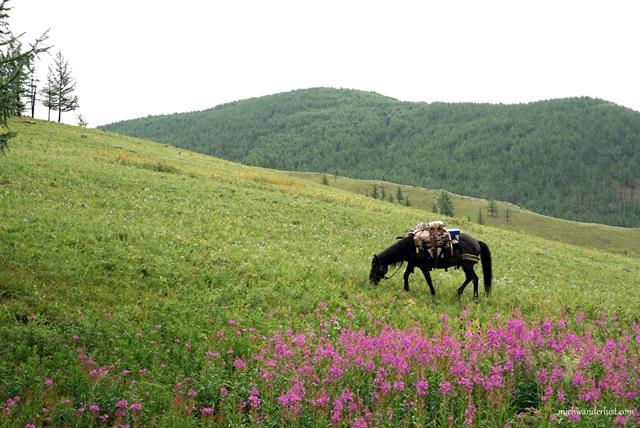 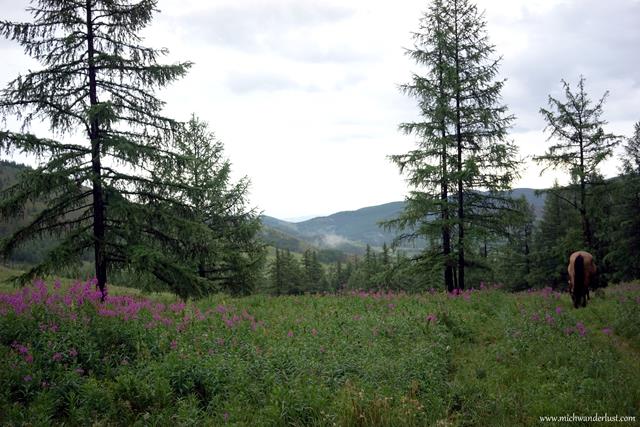 On one of our breaks we stopped near this patch of fireweed – so called because they are the first plants to spring up after a forest fire. They sure are photogenic for a so-called “weed” though!

In the pictures above, you can see the horses engaging in their favourite activity: eating. Every single time we stopped for a break the horses would immediately fall to munching away at the grass. Keith and Sabine said the horses love going on these trips because they get to eat fresh grass! Such good lives these horses have.

They don’t eat just grass though – they also eat various flowers and other plants along the way. Brownie was especially fond of wild onion, and would veer out of the path specifically to grab one of those distinctive purple flowers, and happily chew on it as he moved along. After a while I started being able to guess whether a purple flower was a wild onion flower or not, based on whether he stopped to grab it! 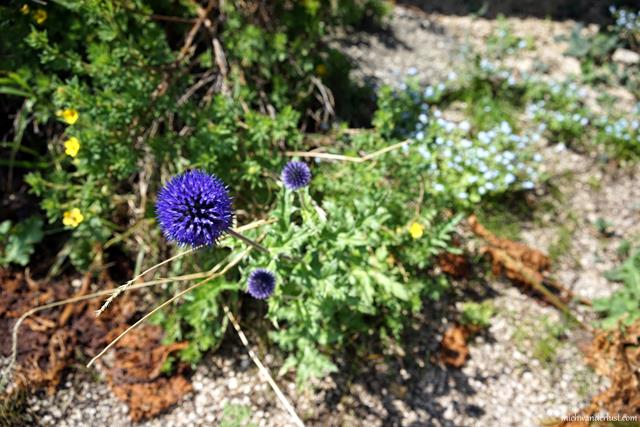 Fauna and the habits of herders

I saw some rabbit holes and a kite (the bird, not the other kind of kite).

Ian saw a rabbit too.

We also saw a herd of about 5 horses running free – they turned and looked at us for a minute and then cantered off. I wondered if they were wild horses, but apparently they’re not (you can tell from the brands on their hindquarters). The herders just let their horses run free most of the time until they need them, at which point they’ll come looking for their horses. We actually did meet some herders on a motorbike looking for their horses a few times! We were assured that they would eventually find their horses, and I hope they did.

It’s great that the horses can run free and eat all the grass they want – that’s got to be a much better life than being fenced in all the time. On the downside, there’s the danger from predators – there are wolves in the park but they wouldn’t go after an entire herd of horses, only those who fall behind and can be cornered away from their herd. Sabine said they’ve lost a couple of horses that way. 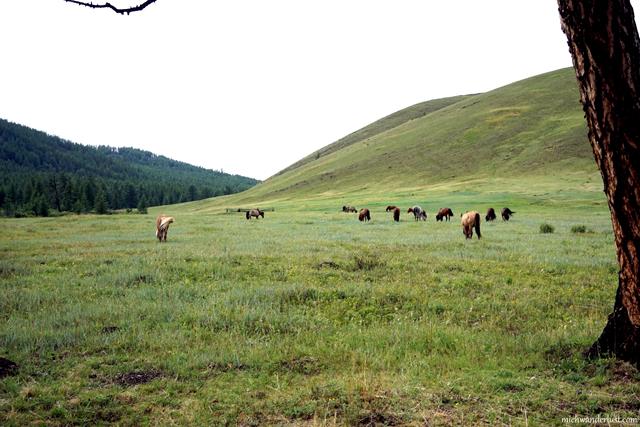 Once we reached the camp for that night, the horses were all unsaddled and then the “hobble” (a piece of rope connecting their front legs and one hind leg) was put on them so that they could roam freely (but not too far away). They can still move pretty fast even with the hobbles on though! In the picture above you can see them all moving away from the campsite and eating as they go. They are brought back before dark though for safety reasons, and they do seem to appreciate that humans provide security.

One evening (and I am so bummed that we missed this!) a moose passed by the campsite and the horses completely freaked out, seeing as the moose was about twice their size and all.  I would have loved to see the moose. 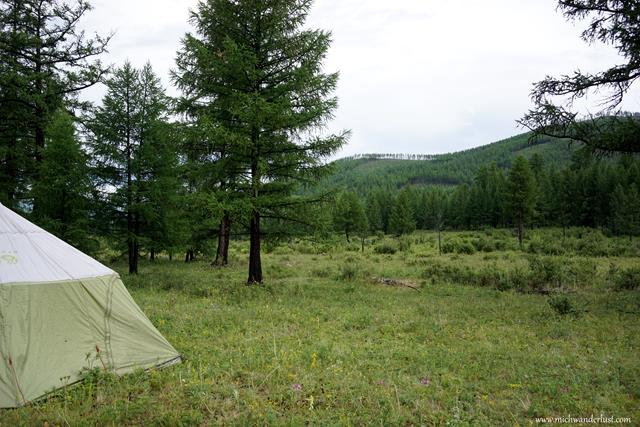 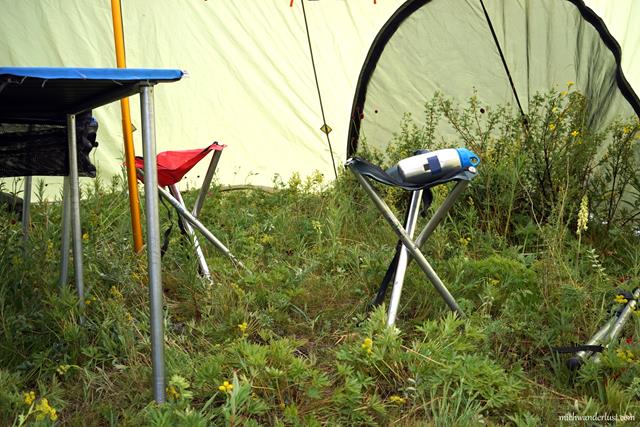 Inside the “ger” (actually a big tent shaped like a ger), for eating and hanging out when it was raining. We mostly had the table and chairs outside though when the weather was good, because (a) there would be a ton of flies trapped inside the ger and seemingly unable to find their way back out and (b) it was less stuffy outside.

To be continued with Day 3 🙂