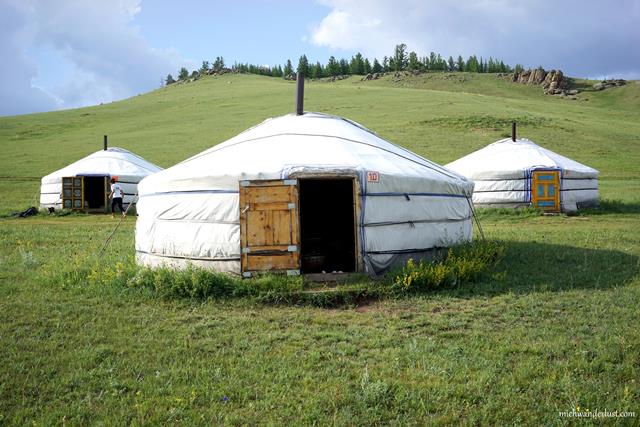 All throughout the long day of riding,  we’d been getting hints that tonight’s camp would be something special. Starting at breakfast, Keith and Sabine would say things like “you’re really going to enjoy tonight’s campsite” and as we neared the end of the day’s ride, they warned us that the horses would get excited and start running towards the camp so we had to keep a tight hold on them. And we weren’t disappointed when we headed over the last hill for the day and saw this:

This is a ger lodge called Princess Lodge. It was so exciting to step into a ger for the first time! I’m not sure how cold it would be in winter though because even though we came at the height of summer, they still offered to light a fire for us in our ger (there’s a small wood stove inside) in the morning and it helped immensely because it was actually quite chilly! It also felt like a luxury to sleep in an actual bed and have access to a conventional bathroom (with a hot water shower!) and toilet. 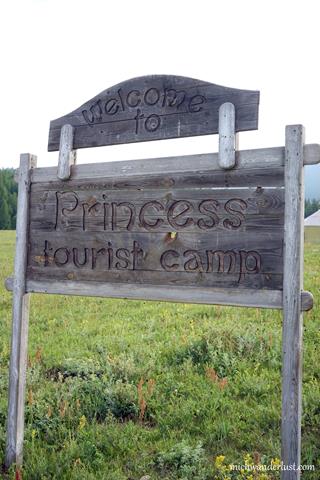 We had a fantastic dinner (but everything on the trip tasted wonderful generally – I would put it down to a combination of: (i) Sabine’s cooking skills; (ii) fresh food; and (iii) hunger brought about by a full day of riding). 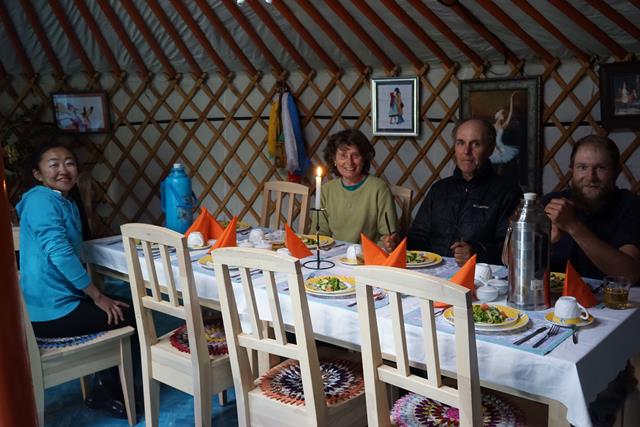 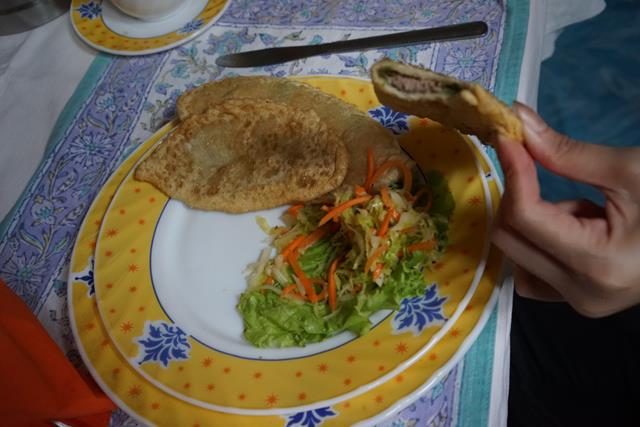 This is a traditional Mongolian dumpling / meat pastry called khuushuur, but we also had some vegetarian versions. It’s kind of like deep fried stuffed roti prata. 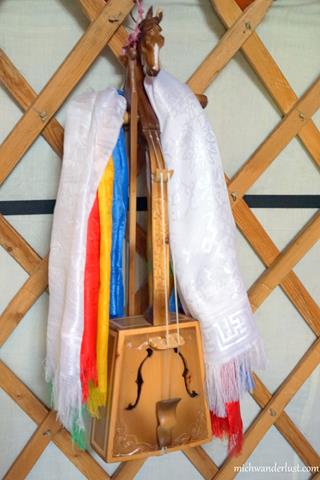 After dinner we played a bit of badminton (the lodge has a badminton net, rackets and shuttlecocks), and when it got a little colder we retreated into the dinner room ger to play cards, drink a little beer and shoot the breeze. Ian did a few magic tricks with the cards, which completely blew Biyambaa’s mind. He had never seen a magician in action before! I loved his reaction.

When we stepped out of the dinner room ger after that, the temperature had plummeted and I was feeling quite cold, but the stars were out and it had been ages since I had last seen so many stars in the night sky (thanks, light pollution!). So we spent a couple of minutes looking up and admiring the constellations before I started freezing and had to go inside. Notwithstanding the cold, it was an amazing sight.

The next day, we had an extra long and fast ride – we took a separate and longer route from the packhorses, who went on directly with Jackson and Biyambaa to the campsite, while we did some serious riding in the most incredible scenery. 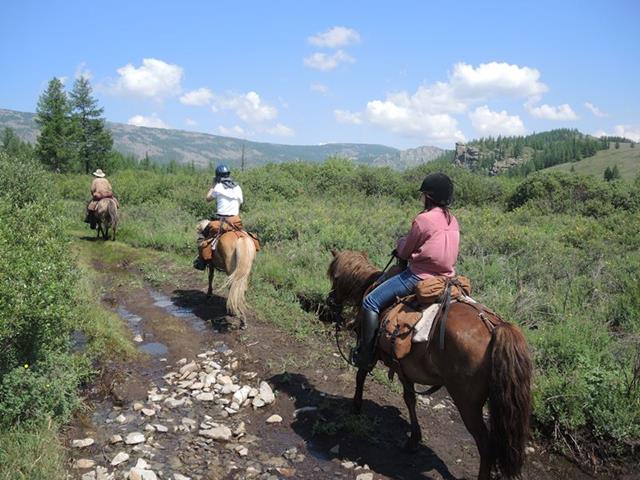 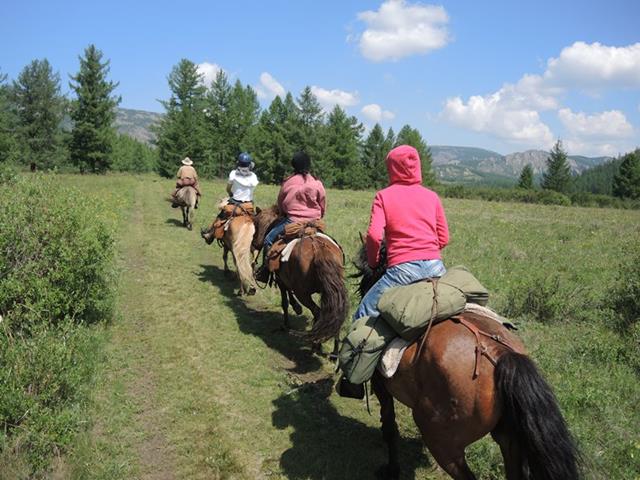 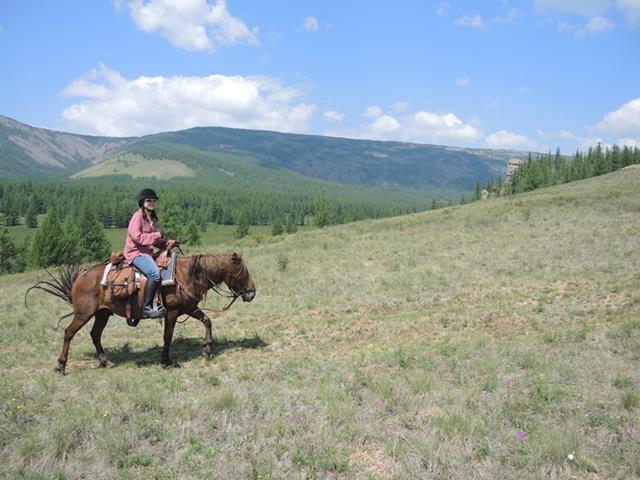 We visited the Princess Temple, which is dedicated to a Manchurian princess who married into the Mongolian royal family and was wildly popular with the locals. Even today, you can still see the gifts / offerings that are left for her. We heard that the authorities have to keep clearing the temple periodically to keep it from overflowing with the gifts brought by people. 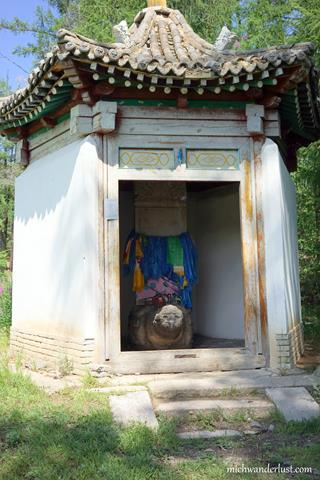 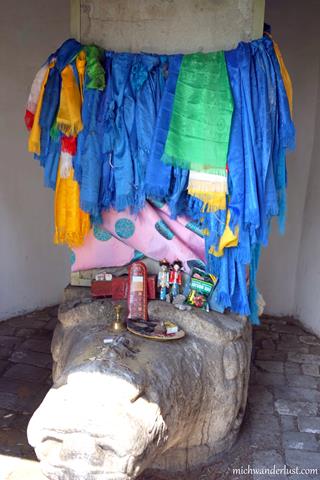 It also used to house a monastery and her tomb, but these were destroyed during a war (maybe World War II, I can’t remember), so all that is left are ruins. 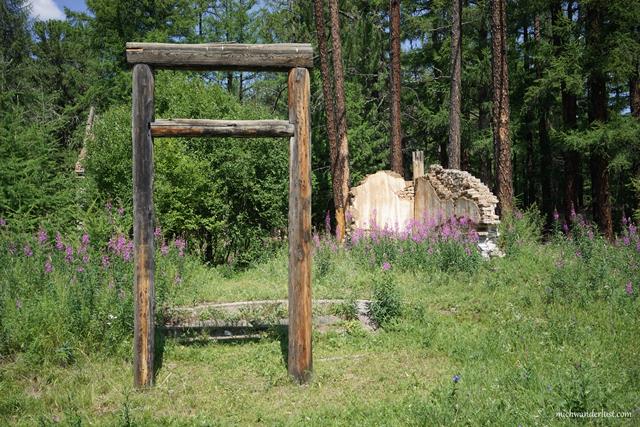 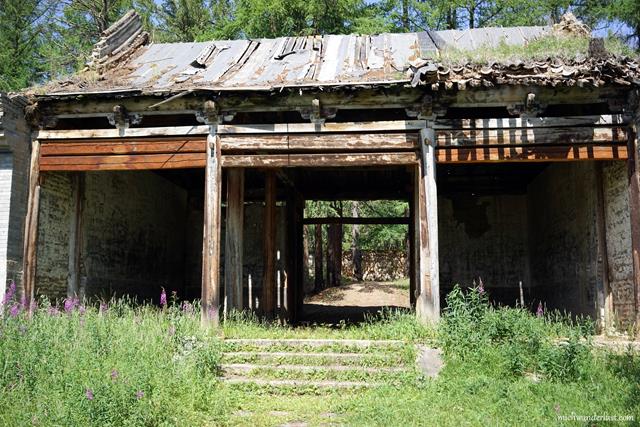 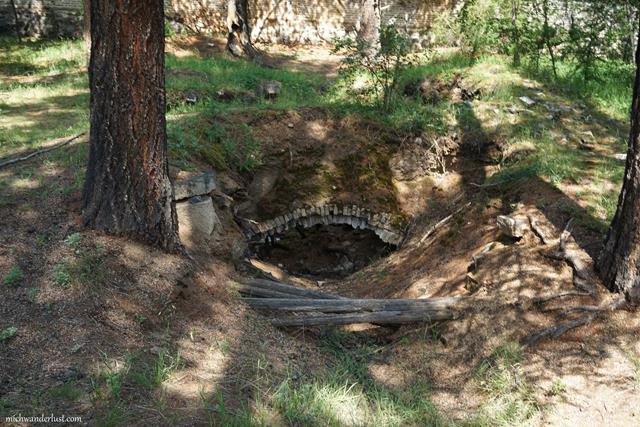 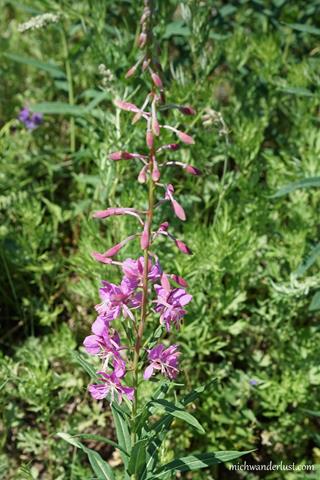 We had lunch surrounded by the rock formations for which Gorkhi Terelj is known, and then proceeded to ride some more. Without the packhorses, we could do more cantering and galloping – which was easier for the horses than walking / trotting in some cases. such as going up and down steep slopes. There is nothing quite so thrilling as galloping along to the rhythm of hooves with the wind in your face, your entire being just focused on being in sync with your horse as he runs faster than you could ever run.

We spent most of the afternoon trotting though, mostly only stopping to walk when crossing puddles and streams. I dealt with this by alternating between sitting trot, rising trot and doing a variation of the two point position, but later on I got much better at sitting trot and learned to absorb the impact more with my legs.

The biggest blemish on an otherwise perfect day (and trip in general) was the amount of horseflies, which kept bothering Brownie. There were also tons of flies but I think you get used to them after a while and start ignoring them, until they commit suicide in your hot drink, for some inexplicable reason, and refuse to leave your food alone. So apparently flies don’t like vegetables but they love beef. 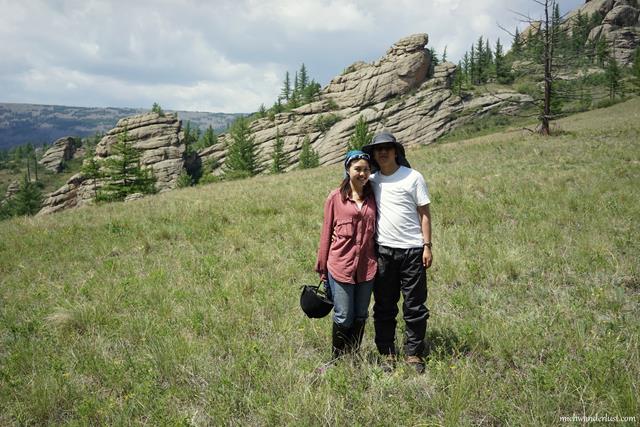 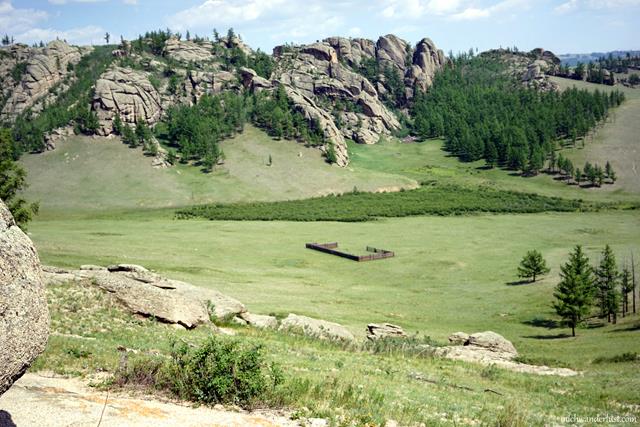 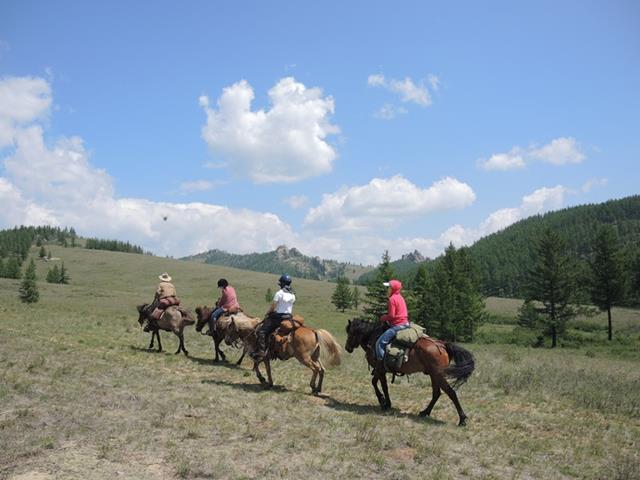 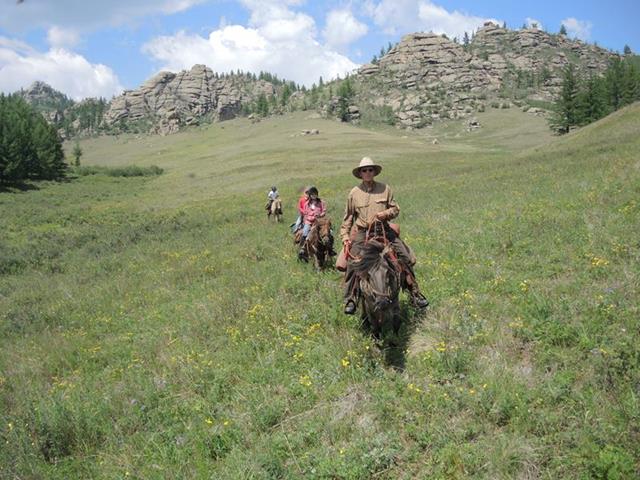 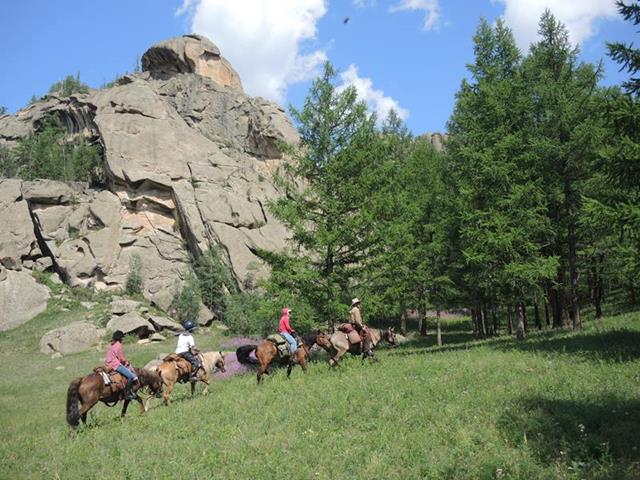 And when we arrived at the campsite, everything had already been set up including our own tent and all that was left to do was relax and have refreshments before dinner (and have Biyambaa show us his rope trick that he had been practising), while the horses settled down to their own meals and gradually wandered further and further away until they were little more than specks on a nearby hill. The good life! 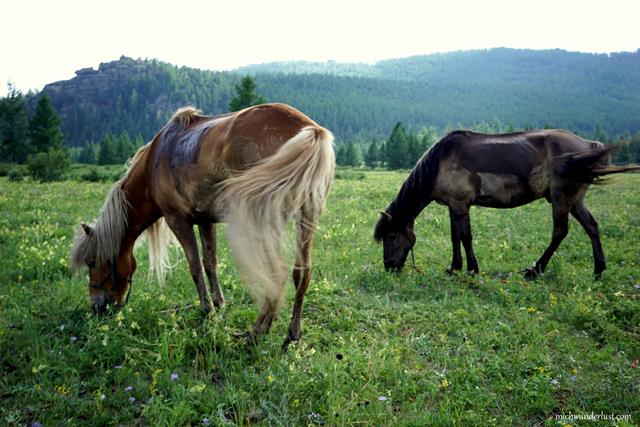 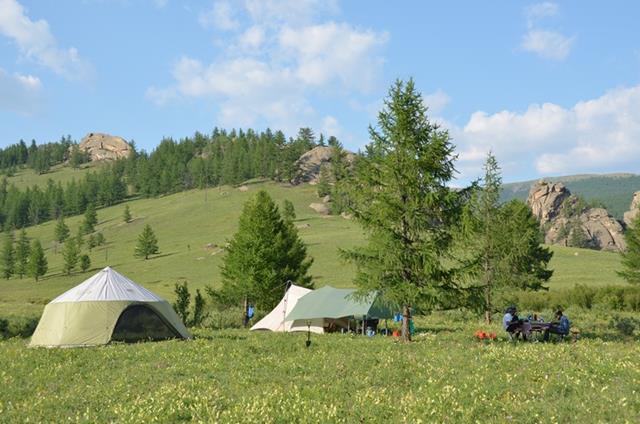 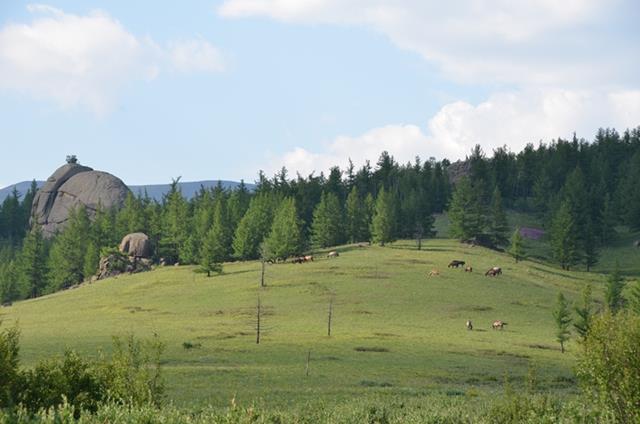 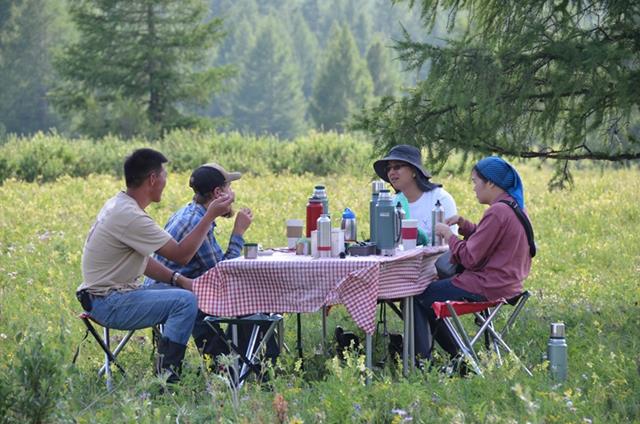 And finally, we eat! That night we had vegetable soup and burritos. 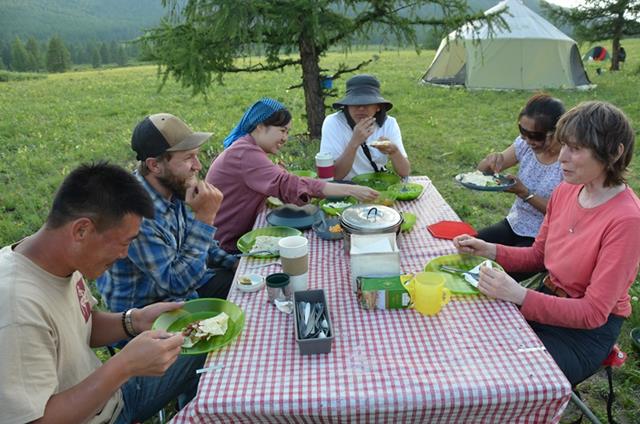 10 Tips for a Horseback Riding Expedition in Mongolia – michwanderlust

[…] when I was trekking through a jungle in Thailand and needed to crap really badly! That said, with the stop at Princess Lodge halfway through, it is quite possible to hold out until you get to a toilet, although I […]