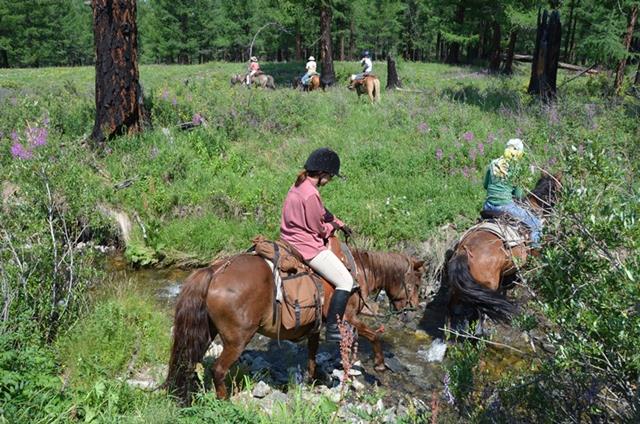 (Side note: I’m hoping to finish this series on my trip from last summer before too long but wouldn’t it be funny if by the time I finish it’s actually summer in Mongolia again? How time flies when you’re busy procrastinating!)

Here we enter the second half of our expedition with a nice relaxing day – most days we went to a new campsite each night, but we stayed two nights here – so we got to wake up an hour later and didn’t need to pack up. Plus we had pancakes (which I love) and scrambled eggs for breakfast!

While at camp, a guy came by on a motorbike looking for four horses. Apparently, the custom here for herders is to let their horses and cattle roam pretty much freely through the park and then try to locate them only when they need them – which could take days.

Our hosts seemed quite sanguine about the whole situation so it’s probably fairly common. I hope he found them in the end! So this is how you know that the apparently wild horses and cattle that you see roaming around are, in fact, owned by someone: domesticated horses will be branded.

Also (and I could be wrong on this), I think there aren’t really any wild horses in Gorkhi Terelj National Park. You would have to go to another National Park (Khustain) to see the wild Przewalski’s horse, and you can tell they are different from regular (domesticated) horses because their manes are really short!

Back in the saddle – summer flowers galore: 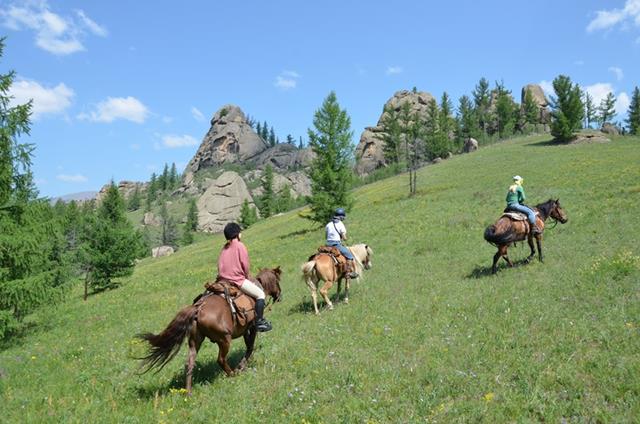 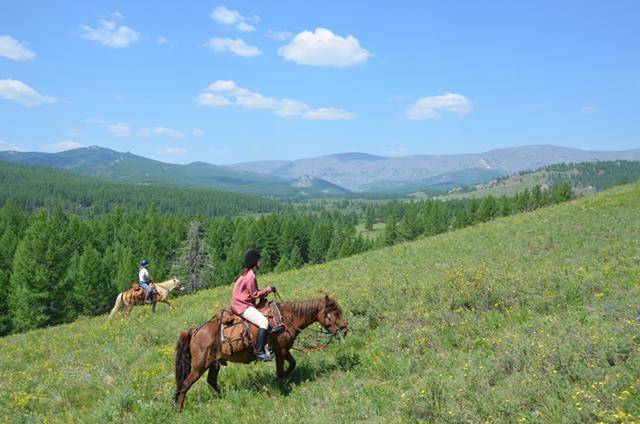 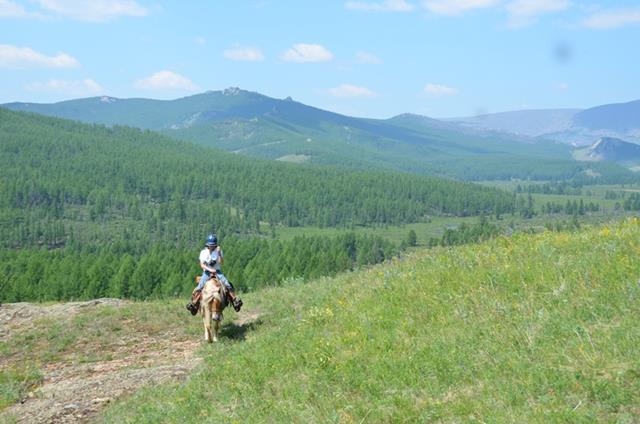 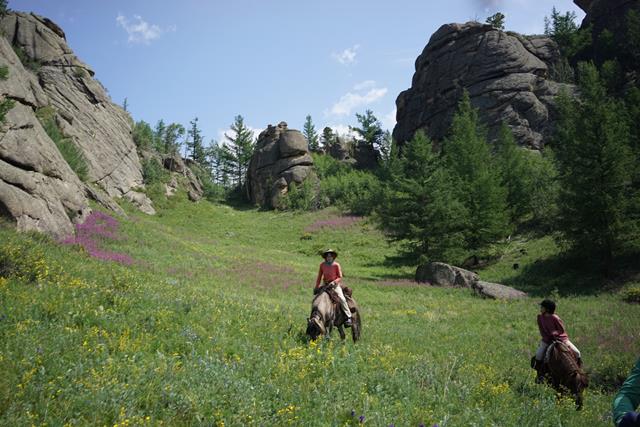 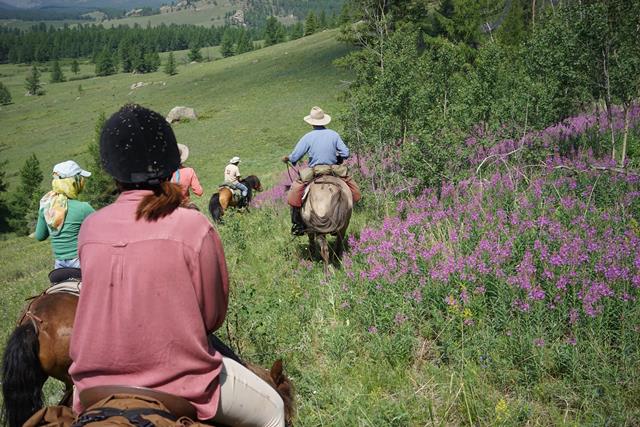 There were that many flies on my helmet, but I’d much rather they be on my helmet than any other part of me! They didn’t bother me when on my helmet. Note also that they seem to be attracted to dark colours (like my black helmet) and least attracted to white – so you know what colours to pack!

We climbed a few rocks for great views and found an eagle claw there. 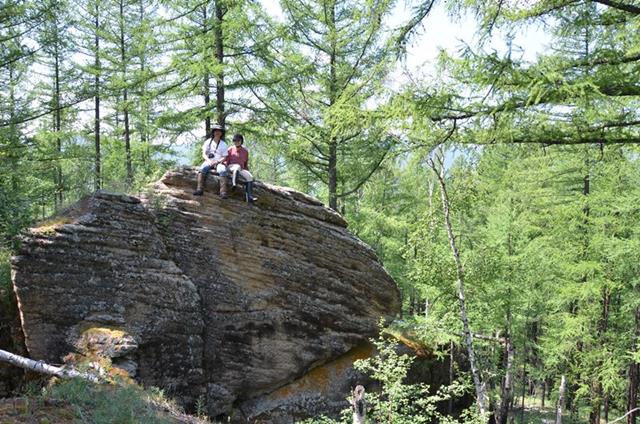 (And no – we didn’t scale the front of that rock! There’s a less steep climb around the back.) 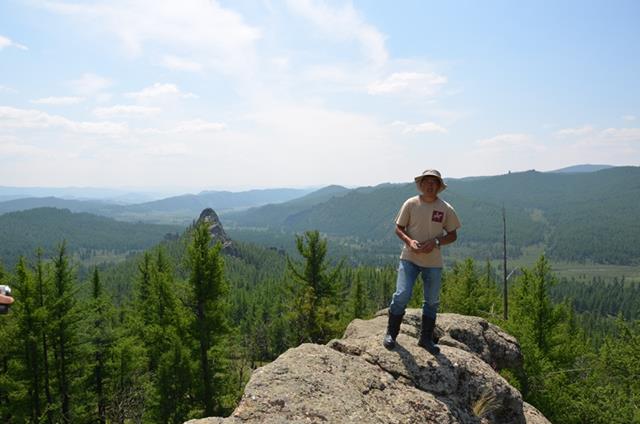 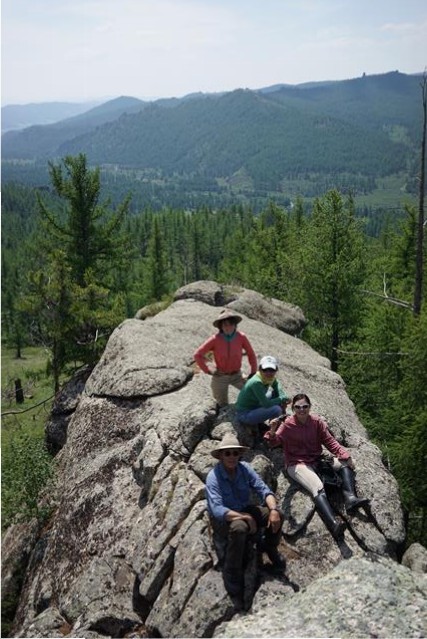 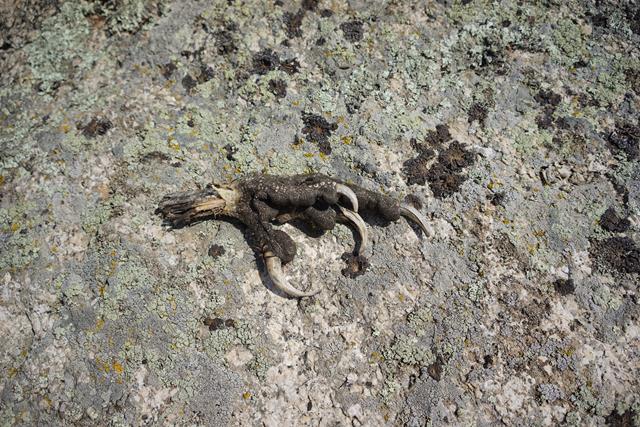 The Chinese, chicken-claw eating part of me noticed that it looked like a giant chicken claw (well, they both have feathers and they’re both birds, so… why yes, I am Captain Obvious!). Also for completeness, I would like to point out that not all Chinese people eat chicken claws. In fact, most of my friends don’t. But it’s pretty yummy in my humble opinion! 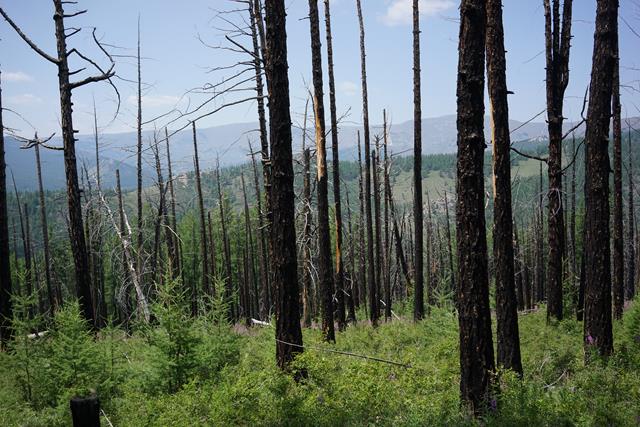 Aftermath of a forest fire. 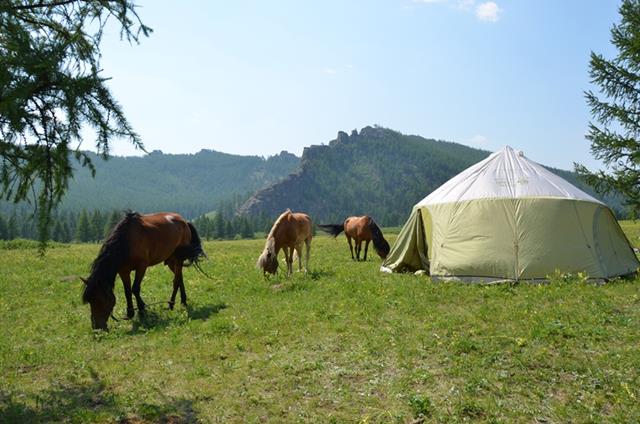 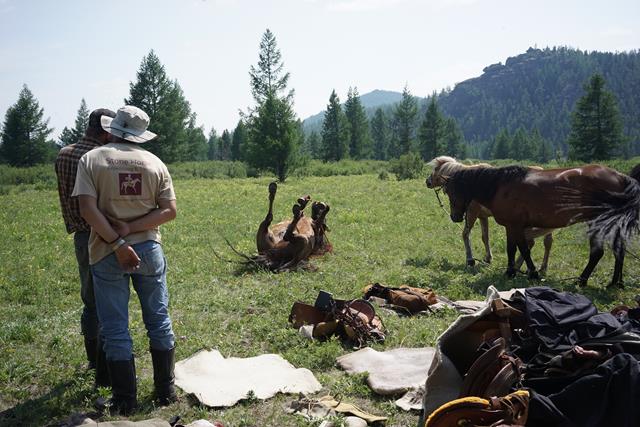 We climbed a fairly steep hill near the campsite to try to catch a glimpse of a couple of wild pigs that Biyambaa saw the day before down in the valley below. They’re very shy apparently and wouldn’t come out if we made too much noise so we tried to keep as quiet as possible.

No luck, but we did see a hawk flying below us and the view was superb. There’s also something about the stillness and tranquility of the entire place which makes you feel completely at peace – save for the ever-present flies which have no qualms about landing and crawling on people – but by this point I had pretty much learned to ignore them. 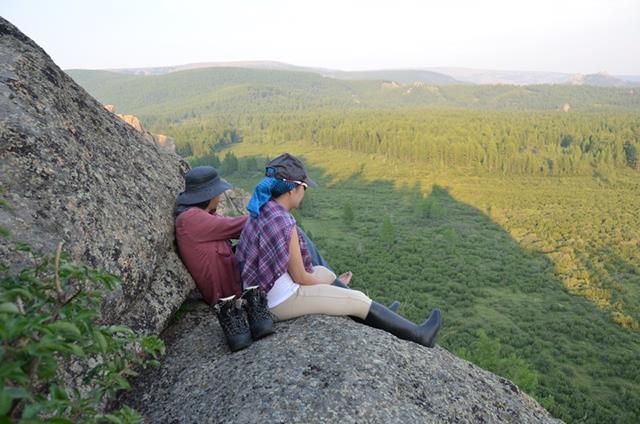 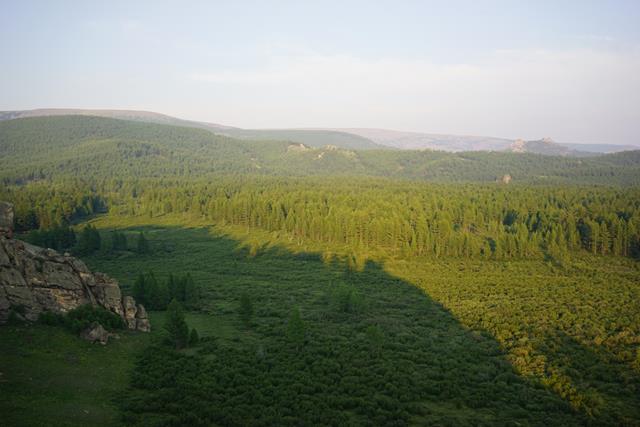 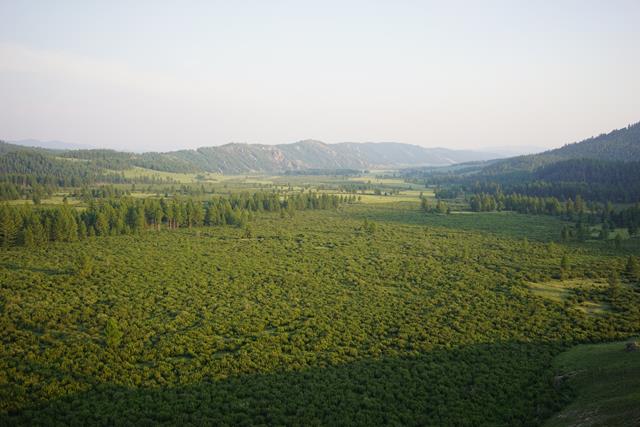 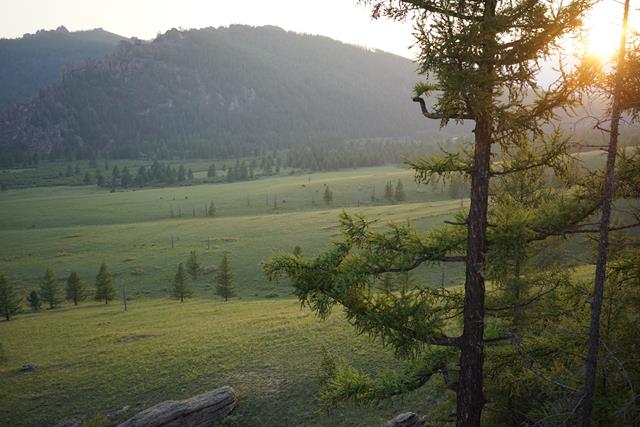 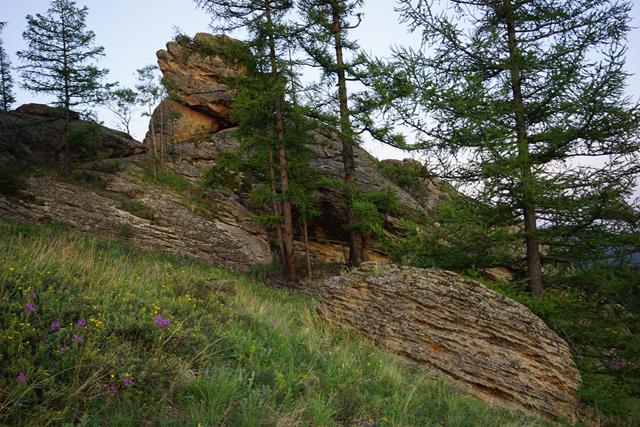 For dinner we had spaghetti and salad, but Sabine also cooked Mongolian noodle soup for the Mongolians who didn’t like pasta, and we tried a bit. Interesting – the beef had a strong smell. 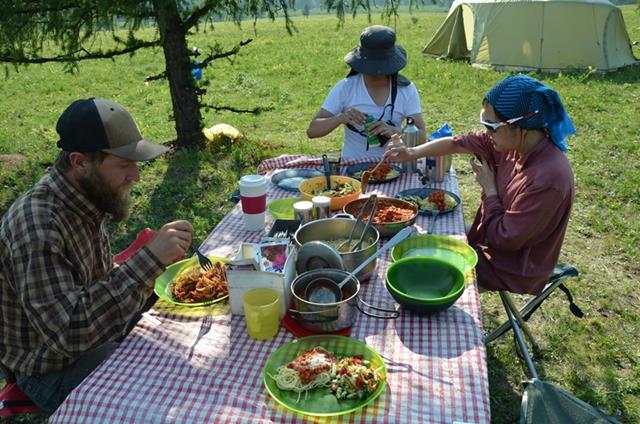 Apparently later that night a moose came through the camp and scared the horses, and there were wolves howling, but Ian and I neither saw nor heard any of this, sadly.

In case you didn’t already know, animal photography is tough. 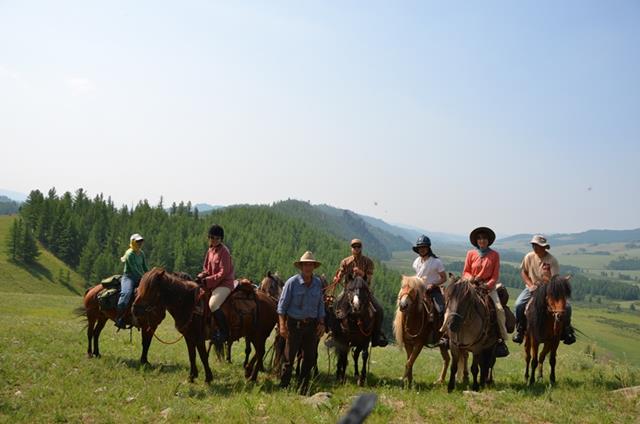 This photo was taken with a certain amount of difficulty as our horses (especially mine) wouldn’t keep still long enough, and then the packhorses wandered off while we were trying to line up for the photo. Luckily (and this is the thing about herd mentality) they didn’t stray too far!

Back on the road, we passed a grave – the tombstone inscription said it was of a 34-year-old person. Ian’s horse rubbed his face on the tombstone as we passed, with zero respect for the fallen. There was also a shaman hut nearby with ceremonial items. No shaman in sight though. 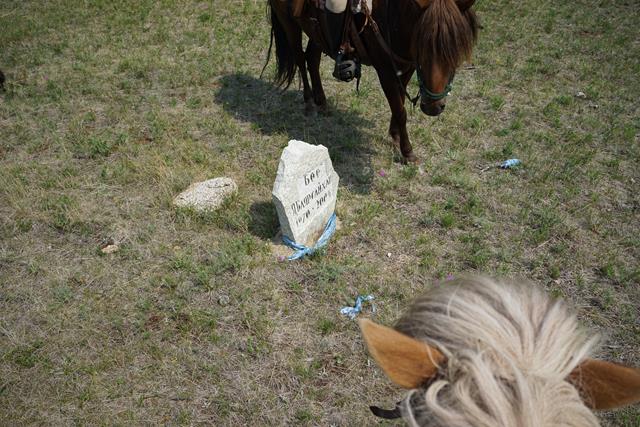 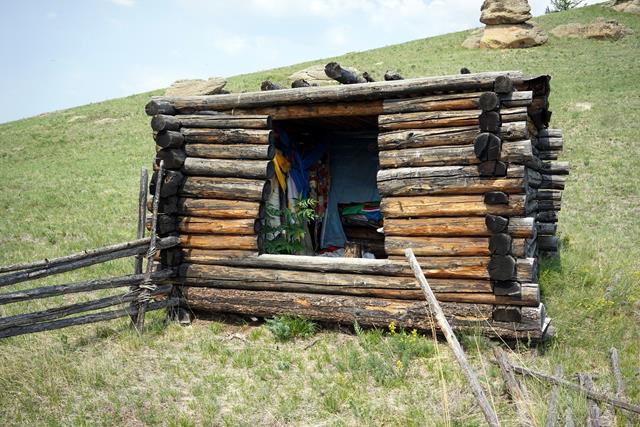 We had lunch under another big rock which some of us climbed (although I didn’t get all the way to the top) while others took a nap. Good post-lunch semi-workout! 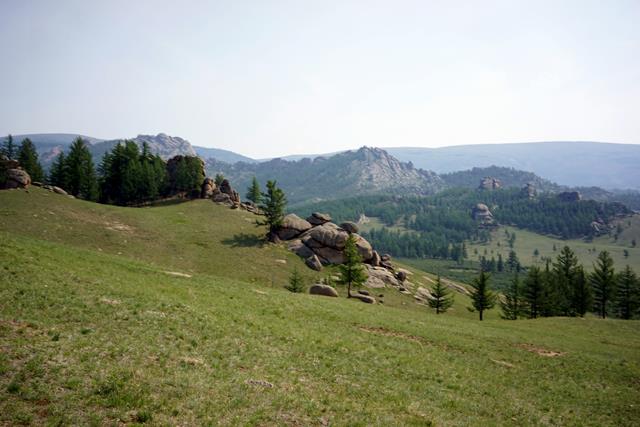 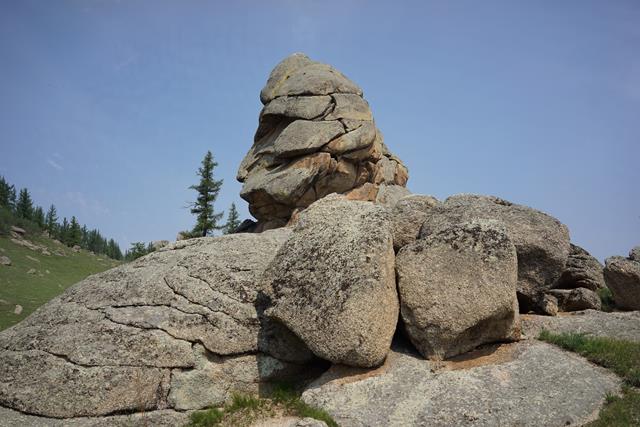 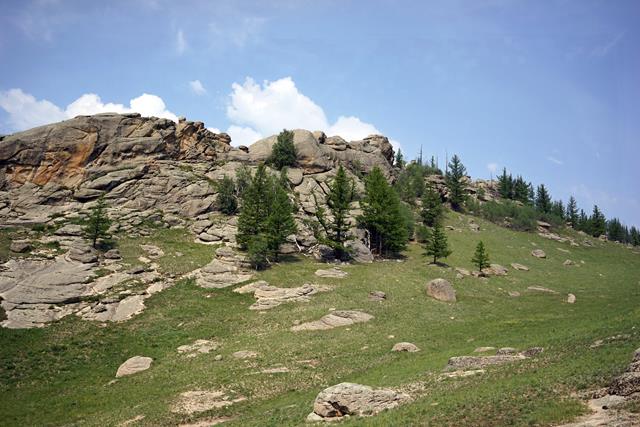 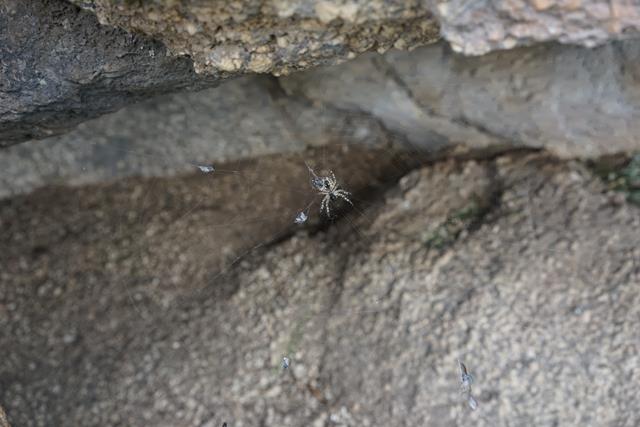 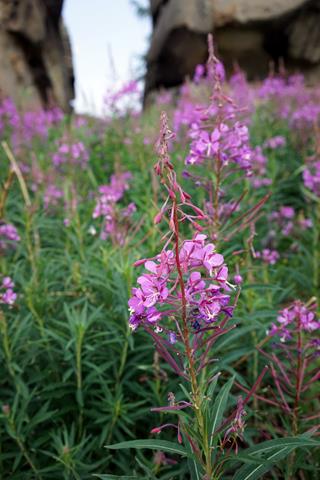 Lots more trotting and we saw some quails flying next to a stream. Brownie got tired of trotting behind Ian’s horse towards the end, jumped sideways and took off, which was fine with me – the faster the better, I say!

However, all this trotting does take its toll if you’re not used to riding for such long periods, and Ian’s knee and ankle were hurting a little when we came in to camp, which was right next to a river that flows all the way to Ulaanbaatar. Imagine following the river all the way to UB! We waded into the stream and sat on the log for a while to ease the knees and ankles. The cold water (estimated at about 50 deg F / 10 deg C) also helped to numb my horsefly and mosquito bites. 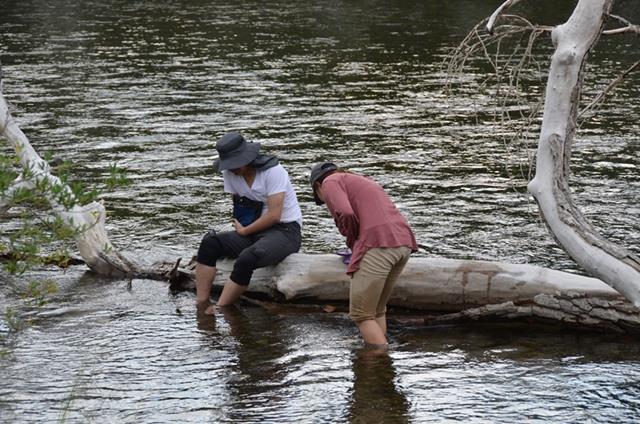 We also took a quick dip in the river at another spot which had a rocky shore. It was shallow but the water was moving quite fast and it was quite hard not to get knocked off your feet. It was also really, really cold – but you get used to it in about 30 seconds, and then strangely enough, start feeling warm when you get out of the water. The human body is an incredible thing.

Dinner was salad, vegetable soup, mashed potato and goulash. And then there was a surprise – birthday cake for Jackson! I’d never have thought it was possible to bake a cake while camping in the backcountry! Chocolate cake mix in a dutch oven with desiccated coconut topping.  It looked like a brownie but the coconut was a nice touch. Then we ended the day with a small campfire.

(All pictures taken either by Ian or Stone Horse.)