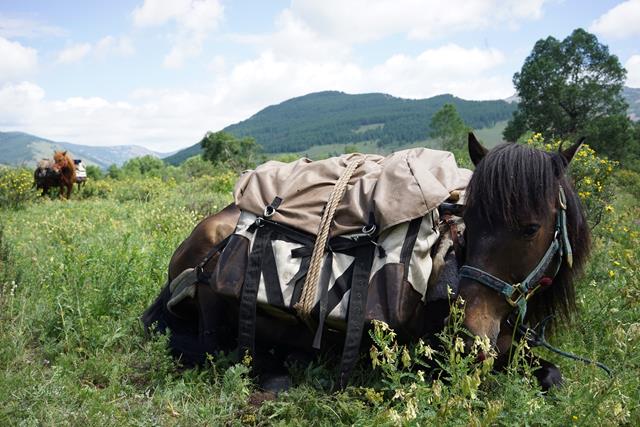 I apologise if the pictures are getting repetitive. To Ian, the amazing scenery all around us started to look the same after a while – mountains, steppes, rivers, rinse and repeat – but I loved every minute of it and tried to soak in as much of it as I could, so that I could bring a little bit of Mongolia back with me.

And I think I did, because looking at these pictures brings me right back: 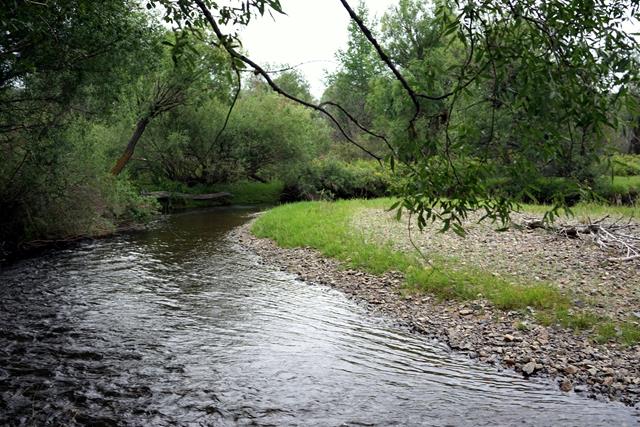 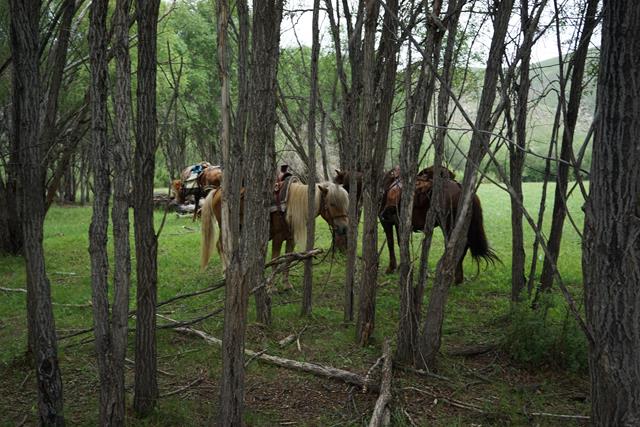 Big Dirty Face (the horse lying down) was possibly one of the smartest horses I’ve ever met – whenever we stopped for a break he would immediately lie down as if he were completely exhausted. The first time he did it I got a bit concerned that he was tired out and couldn’t continue anymore, but was assured that he always does this. And true enough, when the time came to head off, he would get to his feet and trot off with the rest of the horses without seeming worse for the wear. 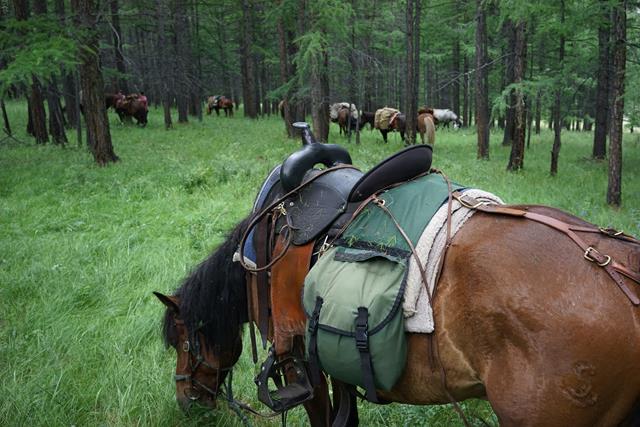 Saddle bags – super useful! I became pretty good at putting them on and taking them off (if I may say so myself) but when I didn’t do so properly they were prone to slipping to one side.

We saw a ger in the distance being pulled by oxen (no pictures, unfortunately) in true nomadic style and other herds of horses and cattle. It was very cool to just ride amongst a herd of grazing horses (and a couple of foals sticking close by their mothers) and be largely ignored.

It rained after lunch again – it rained practically every day and often more than once a day, so I was very thankful for my waterproof jacket and pants.

We trotted for the most part up to 1km before the campsite, when Ian had to slow down to a walk because of his ankle / knee. Keith walked him and his horse the rest of the way to the campsite, while the others went on ahead. I lingered for a bit but Brownie was getting really anxious at seeing the rest of the herd disappear, so we went after them and Brownie took off like an arrow the minute I got back up on him.

(Side note: one of my pet peeves is when people confuse “reins” with “reigns”. It’s called “taking the reins” / “reining someone in”, like a horse. You don’t take the “reigns”, even though you might feel like a king when doing so.)

Our last campsite, in an open field surrounded by mountains: 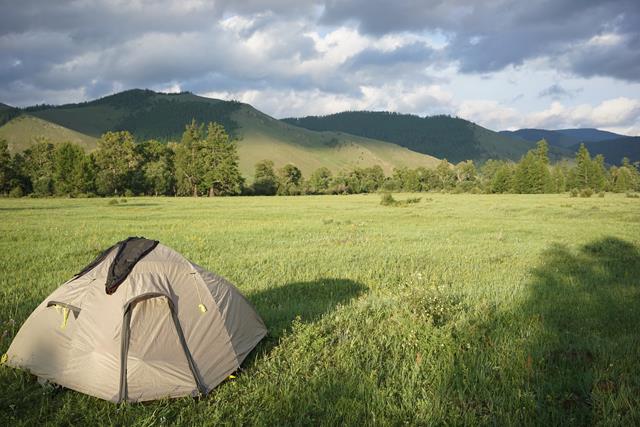 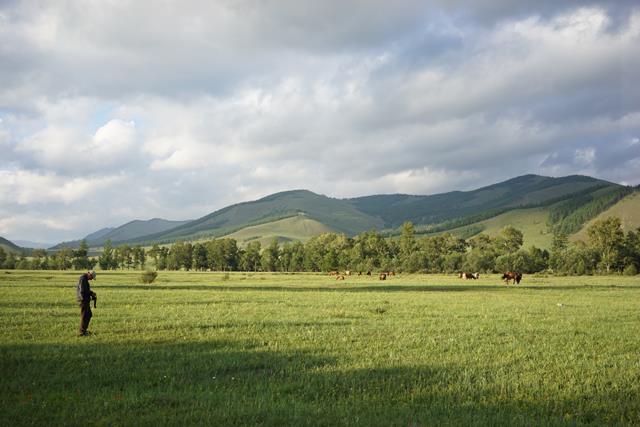 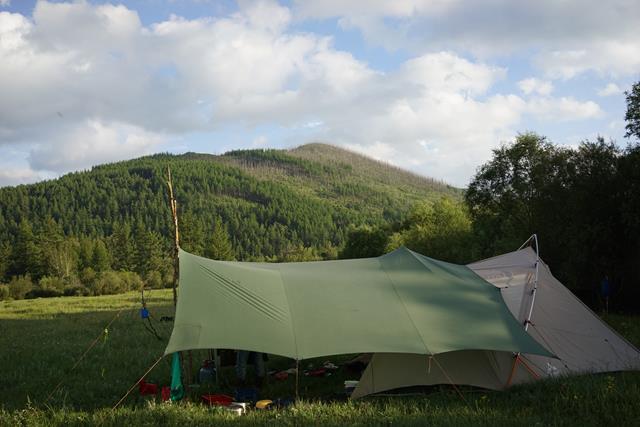 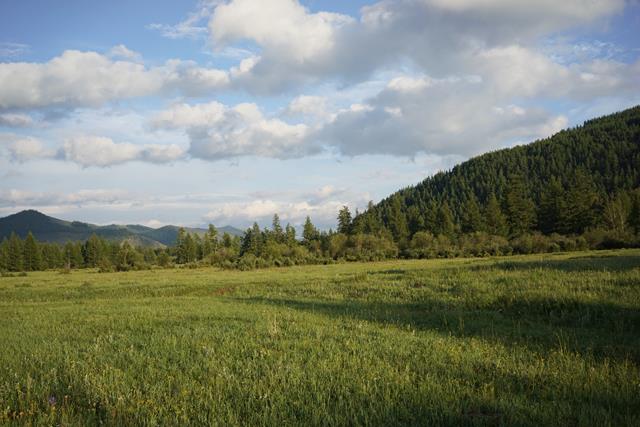 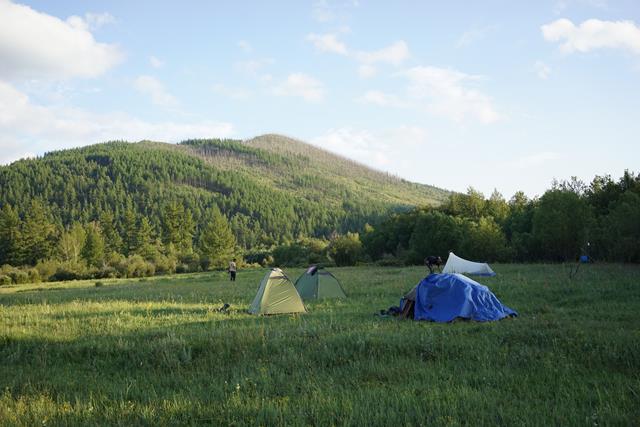 Everyone just chilled before dinner (except for the industrious cooks) and Biyambaa and Jackson wrestled for a bit. Biyambaa was extremely good and won easily. Maybe that’s why the top sumo wrestlers in Japan are Mongolians!

One downside to this wide open space, though, was having to trek very far from the campsite in order to answer nature’s call – in one of the clumps of bushes / trees in the distance there. I did get quite proficient in burning toilet paper with a lighter though (we were taught to burn the used TP – because it aids decomposition I guess), quite an accomplishment given that I’d been afraid to use lighters all my life (one time too many getting the tip of my finger burned)!

For this last dinner, we had rice and curry.

Then we watched Jackson and Biyambaa get the horses back for the night and line them up along a picket line so they wouldn’t stray too far from the camp during the night. Jackson showed us how to scratch the underbelly of a horse, which some really loved – they seem to have a similar reaction to dogs when you scratch a particular spot on their belly. However, when I tried it on Brownie he just looked at me like I was crazy. I guess he just doesn’t have that spot! 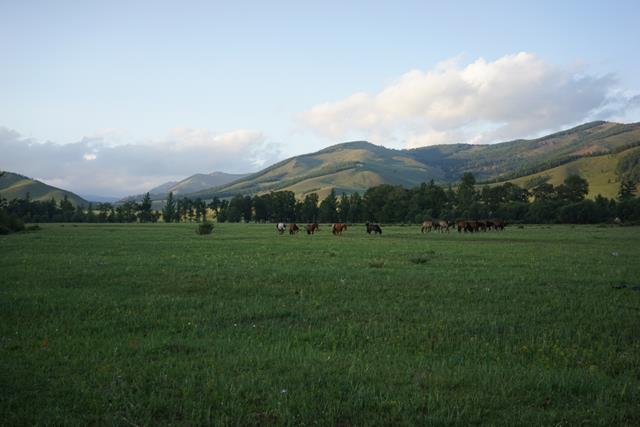 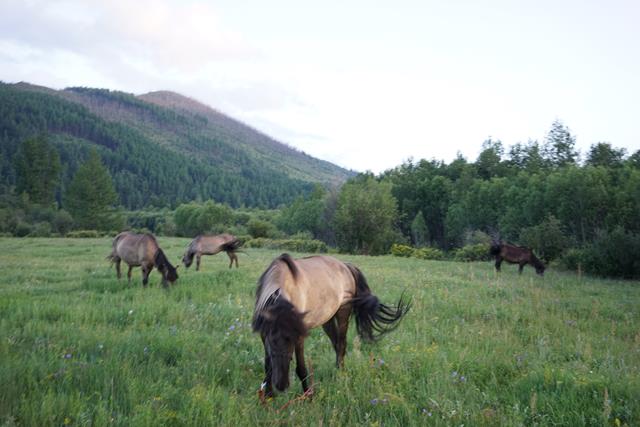 Last day of riding – the horses seemed to know that we were almost home. They trotted quite fast and the terrain was fairly easy, mostly open plains, save for a couple of river crossings.

We stopped for lunch in a pleasant meadow, during which the horses wandered pretty far off into the bush.

Just… wow. What I wouldn’t give to be back there, flies and all (though fewer flies would of course be good!). 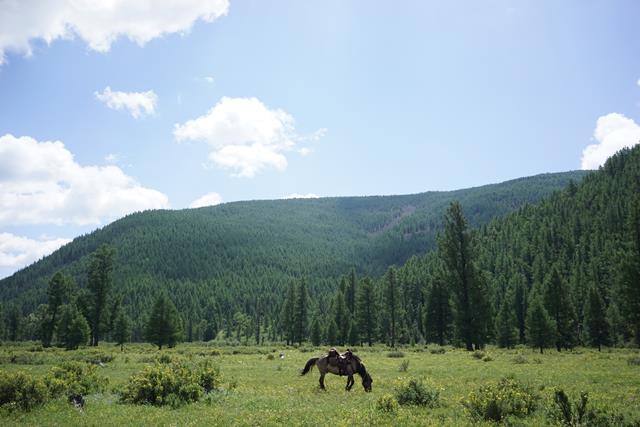 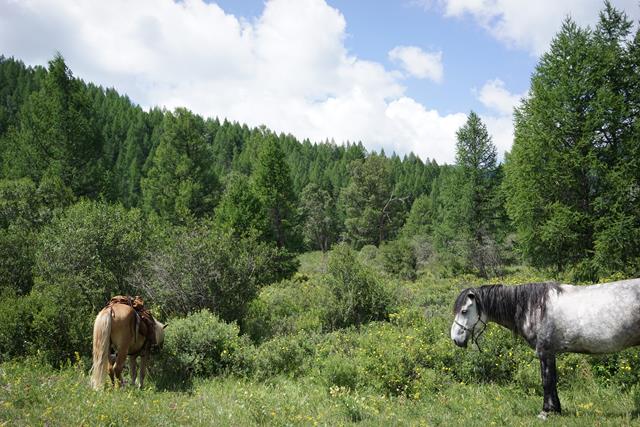 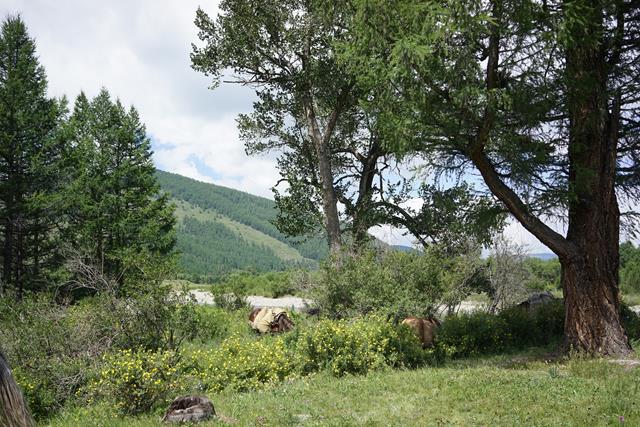 Here you can see them disappearing into the bushes!

Except for Big Dirty Face (above), who as far as I recall didn’t wander anywhere. 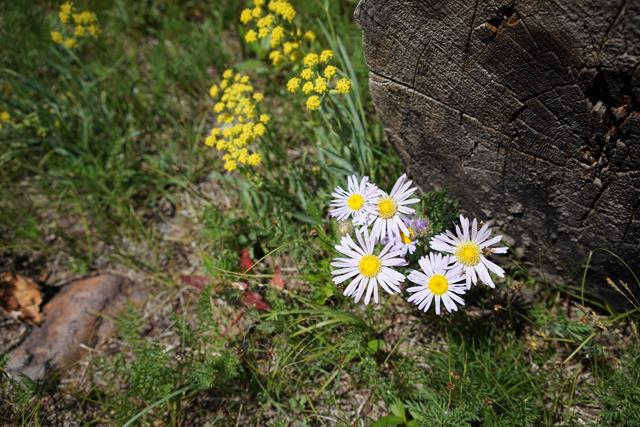 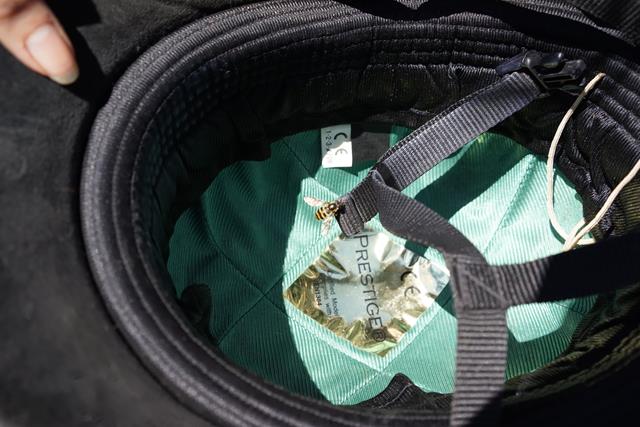 A bee in my bonnet, literally.

Heading back towards the cabin after lunch was bittersweet – more bitter than sweet, actually. Thankfully it took a few hours so I still had lots of scenery to admire. Jackson and Biyambaa amused themselves throwing pine cones at each other and we all had a good laugh when Jackson tried to sneak up on Biyambaa but Biyambaa turned around and made like a lion (ROAR!) and Jackson’s horse (who was the very nervous sort) just took off. You might call it karma.

We passed the rest of the herd and Brownie kept looking back at them and whinnying.

Back at the cabin, I dismounted and took off the saddle bags one final time (I didn’t take off the rest of the gear because it’s a bit different from what I’m used to and they have a particular way of doing it which I didn’t want to mess up). I did get to take off Brownie’s halter though and say goodbye to him. Then I watched him amble off to join his herd with a real lump in my throat and tears in my eyes. 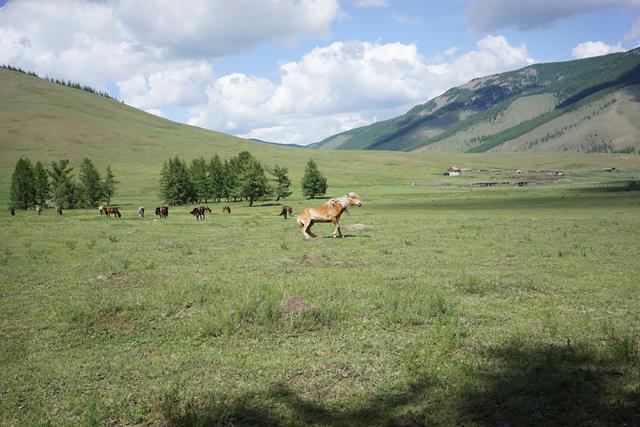 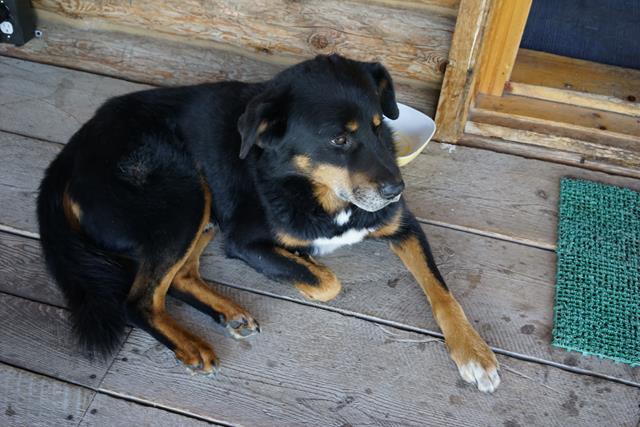 Stinky, who sometimes comes on trips but didn’t this time. Fairly large but really gentle dog, and much better with people than The Dog.

We lingered a while longer at the cabin re-packing our stuff before saying goodbye to Keith and Sabine and heading back to town with Davaa and Bagi.

What a trip. It’s been almost 9 months now and I can still remember it like it was yesterday. Which is a pretty amazing feat given that I’d have great difficulty telling you what I had for lunch yesterday.

Someday I’ll go back and reunite with Keith, Sabine and all the amazing people they work with, and my old friend Brownie. And maybe then Stinky will come along for the ride! Until then: 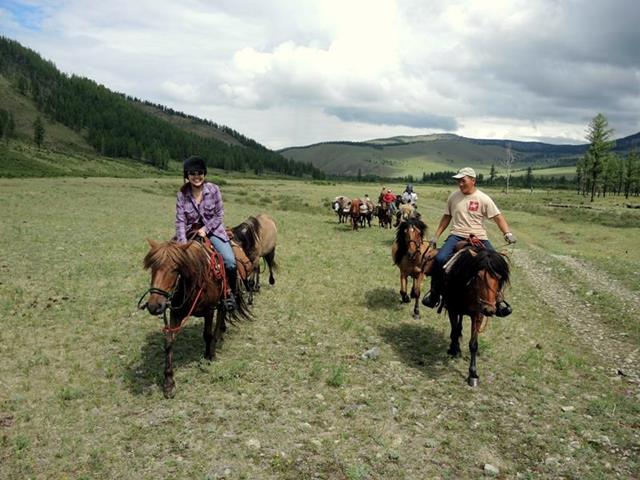