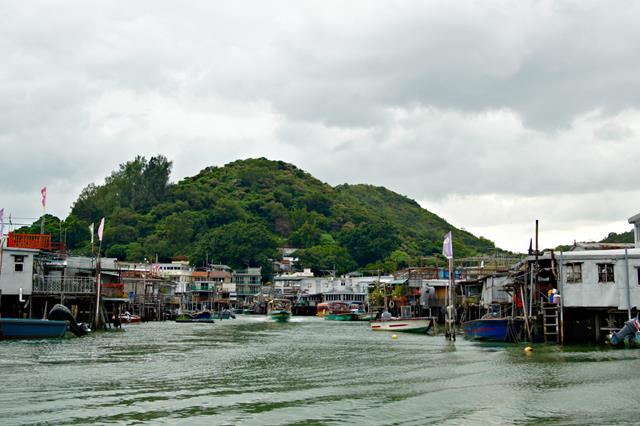 Shatter every window ’til it’s all blown away,
Every brick, every board, every slamming door blown away

Ok, it wasn’t quite that dramatic, but it’s the part I remember most vividly about the whole trip: being ditched by our boatmaster, discovering that free ponchos are free for a reason, and walking into winds so strong that being blown away suddenly felt like a real possibility… and we lived to tell the tale!

The day started out innocuously enough, with breakfast at the Cupping Room. It boasts an award-winning barista and is apparently one of the must-go cafes in HK. (I hardly ever drink coffee but my friends do, so I’ll take their word for it!)

I had iced mocha. It was not bad, but Ginny said her coffee tasted sour. 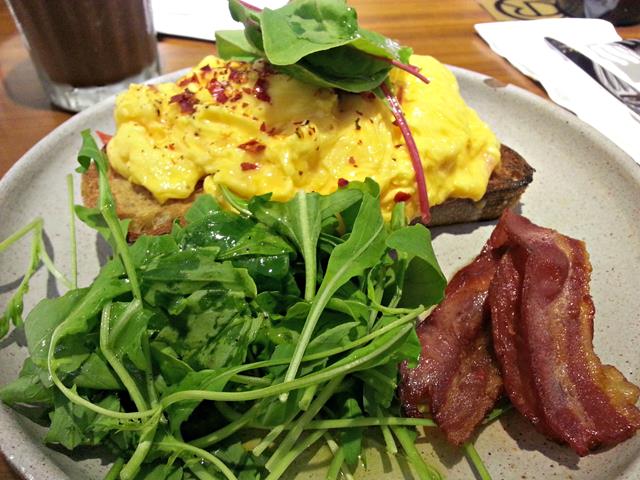 I had chilli scrambled eggs, which was not bad. The french toast was marvelous. 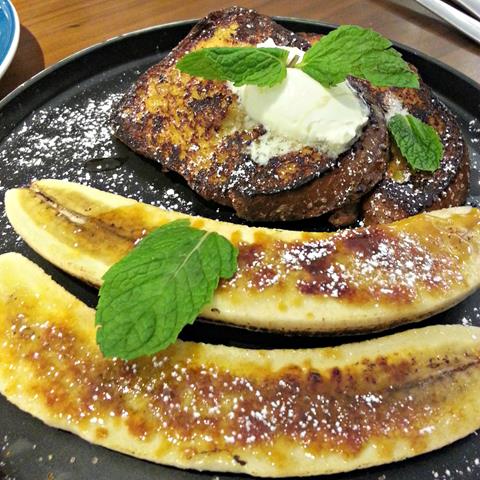 We then headed over to the harbour, where we had booked a junk to take us to the island of Po Toi. Po Toi is apparently one of the less-visited islands and has some great hiking, so I was really looking forward to it.

Unfortunately, the weather was not in our favour. 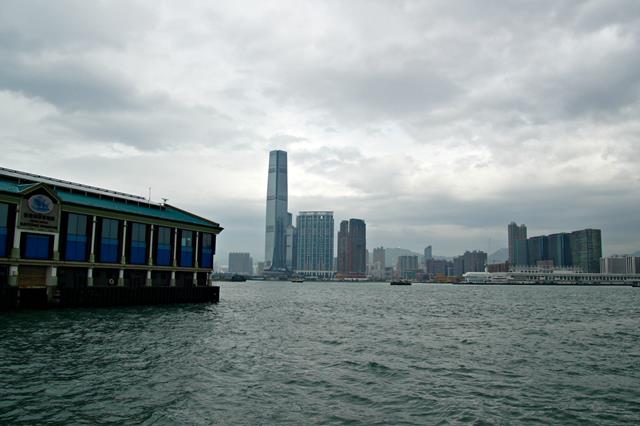 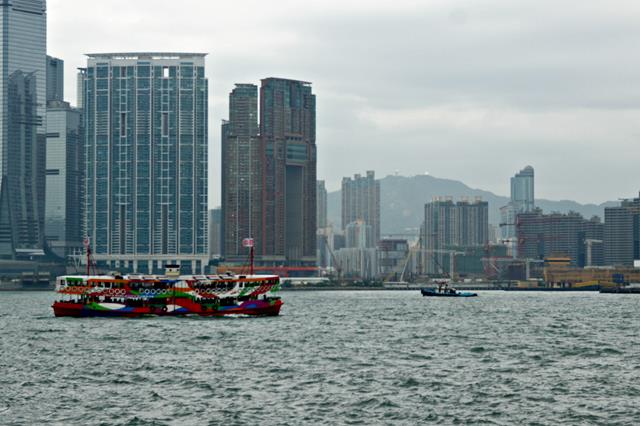 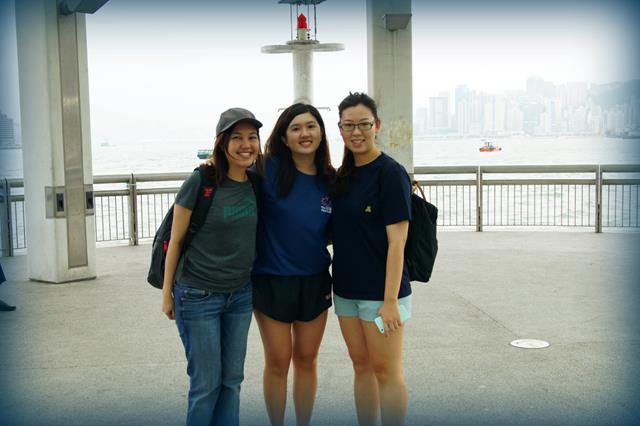 We discovered that a T3 warning had been issued (meaning strong winds) and that the junk doesn’t do trips in this kind of weather. So we sadly watched it turn around and sail away without us.

Not to be deterred from visiting an offshore island, we hopped on a ferry to Lantau Island which is a short (about 30-min) ride away.

Lantau has a much more rural feel to it, with cows strolling along the side of the roads and miles of forest. It also has stretches of beach and mountains. We hopped on a bus headed towards the giant Buddha in the village of Ngong Ping. 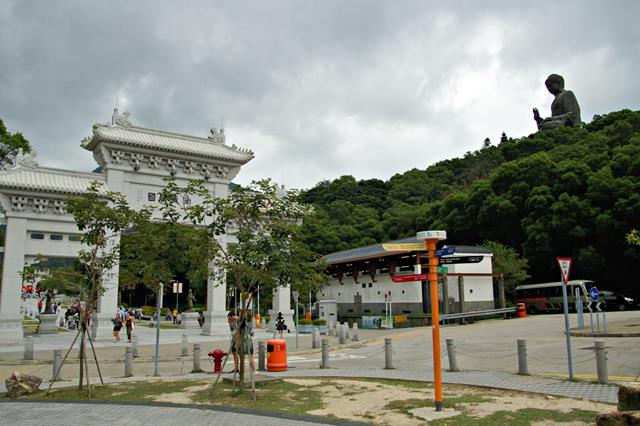 By the time we got off the bus we were a little peckish, so we stopped for a quick snack (which ended up being a bit more than that). 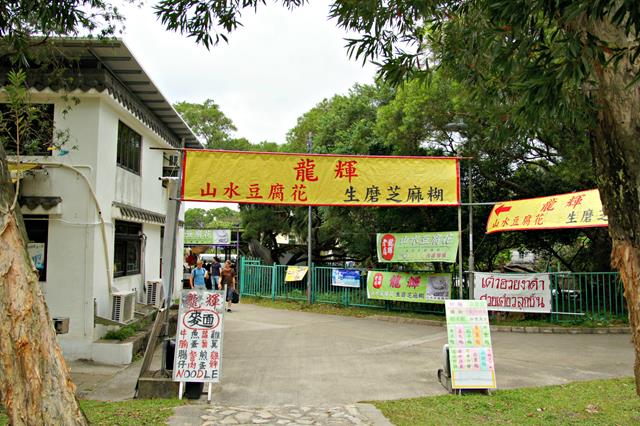 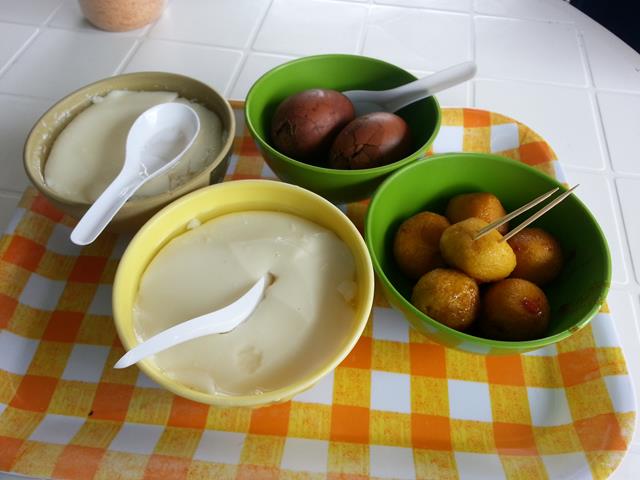 It started out with two bowls of beancurd (tau foo fah / tau huey), chinese tea leaf eggs (茶叶蛋) and curry fishballs. I rarely find 茶叶蛋 and will jump at the chance to buy it if I see it. They’re not exactly the kind of thing I would attempt at home as they’re steeped in simmering broth for hours.

The curry fishballs were pretty good too.

We then got a little carried away and bought lotus leaf glutinous rice (with chinese sausage and chicken) and wanton soup. Yumm! 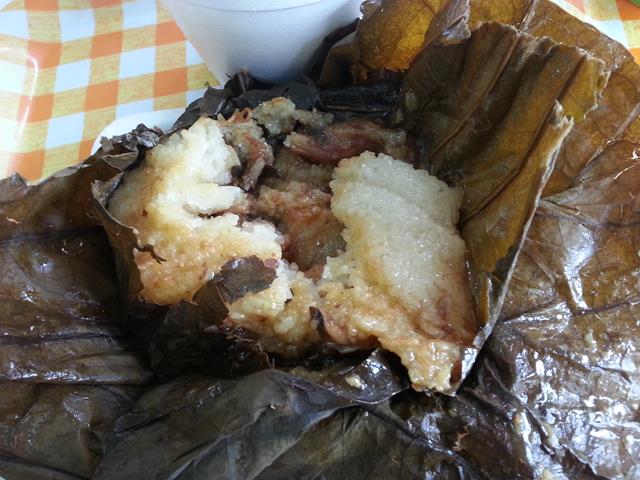 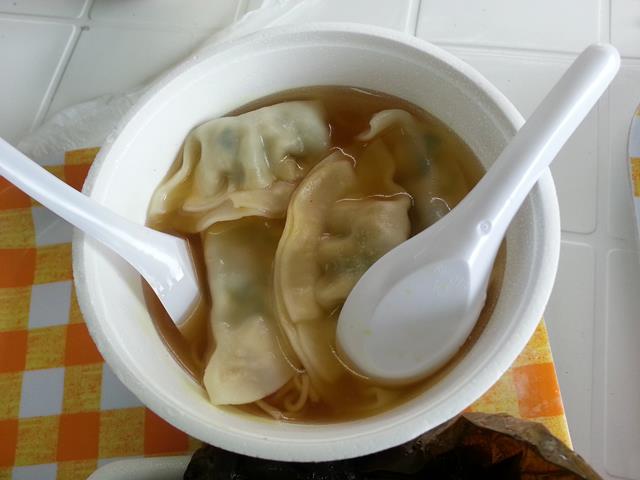 Only then did we start the trek towards the giant Buddha, passing some other interesting statues along the way. 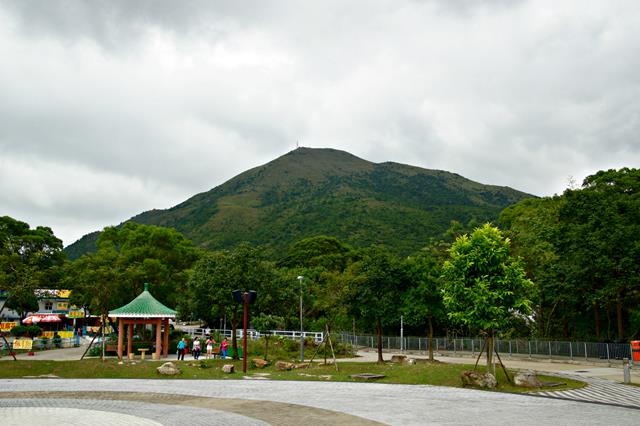 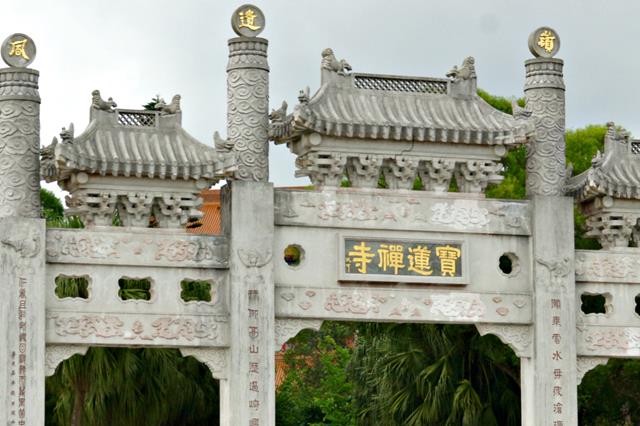 The giant Buddha is located at the top of a fairly long flight of steps, so there were plenty of photo ops along the way – if you don’t mind the fact that everyone else has the same bright idea. 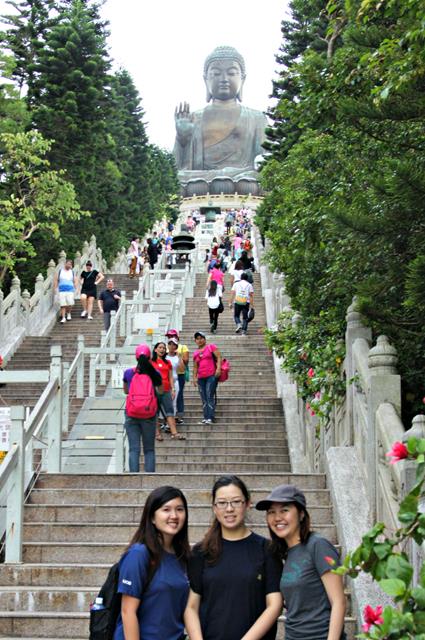 The entrance fee was HKD38 to enter the museum and temple at the top, with complimentary snacks at a nearby temple. 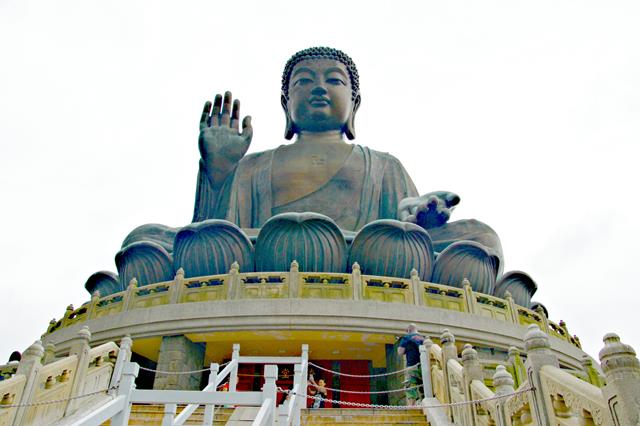 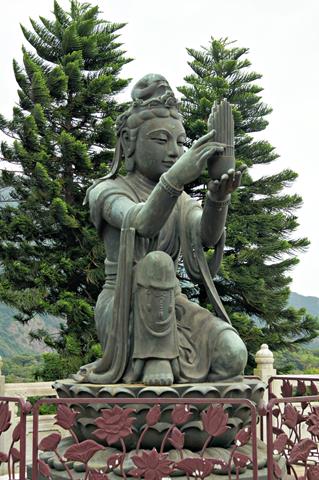 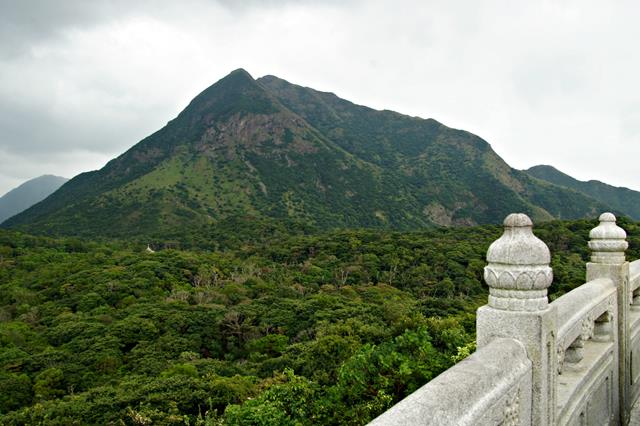 Shortly after we reached the top it started raining, with very strong accompanying winds (we see you, T3 warning). The strongest sustained winds were 112 – 120km/h there! This was also when Adrienne and I discovered that our ponchos sucked. Moral of the story: invest in decent rain gear and don’t rely on freebies from budget airlines!

We ended up huddling under a roof for a bit with other stranded travellers before braving the rain to claim our snacks. 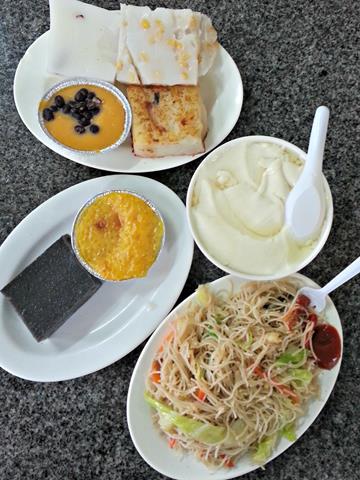 The carrot cake was nice, the sesame cake was not, and the tau huey was ok. 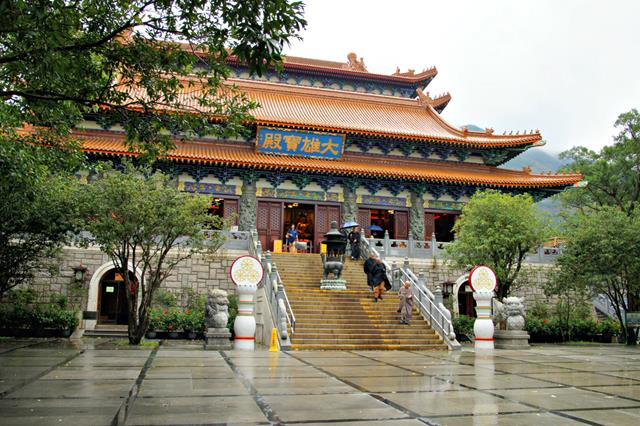 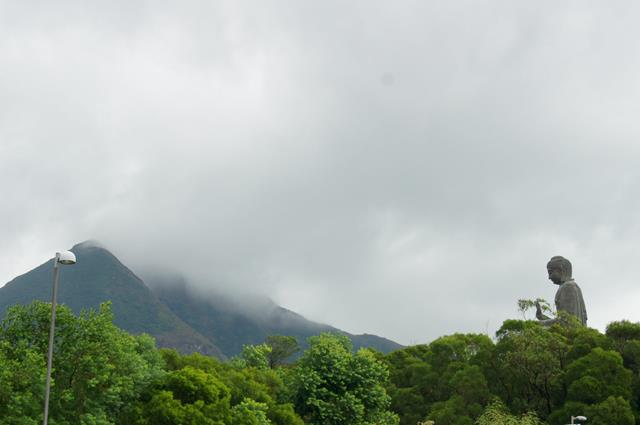 We had originally planned to hike to Tai O, a pretty fishing village known as the Venice of HK, but due to the rain and the ensuing delays we decided to just take a bus there.

There are many dolphin boat tours, and we paid HKD25 for a 20-minute one but didn’t see any dolphins unfortunately. We did see flying fish though. 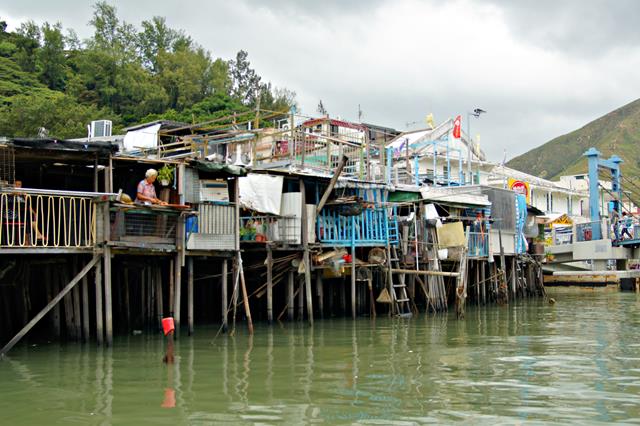 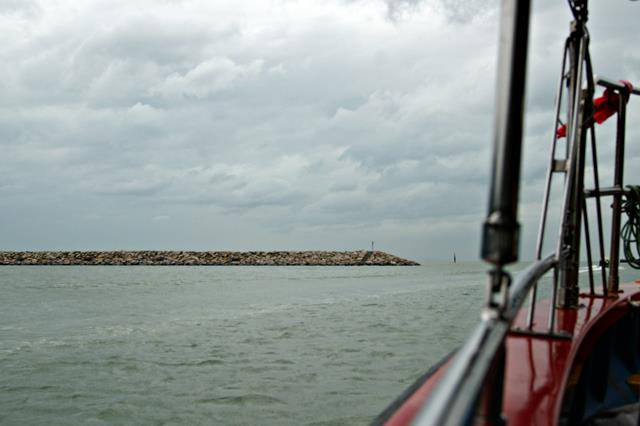 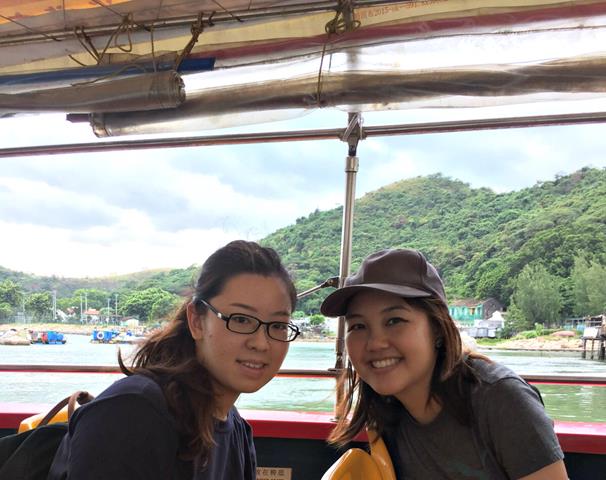 It started raining (again!) on the way back to shore. 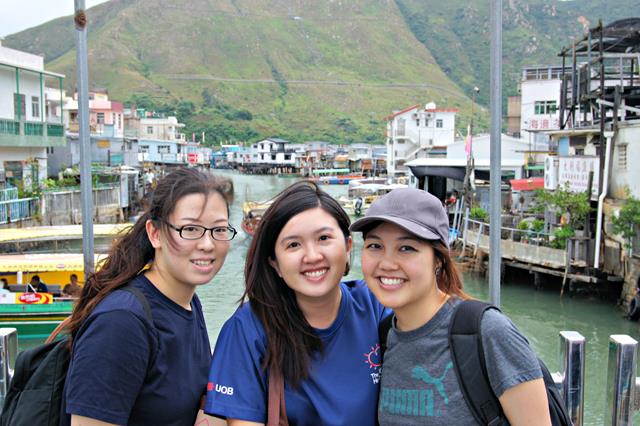 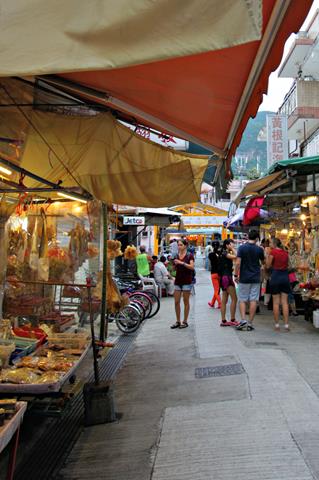 We wanted to try the famous Tai O donut and egg waffle but they were sold out, and we were cold and wet. But all was not lost! We ended up at Tai O Crossing Boat Restaurant (橫水渡小廚) and the staff there were so kind. They let us hang our dripping ponchos on other chairs and turned the air-con so that it wasn’t blowing directly at us.

And the food – it might have been just because we were cold, wet and hungry, but that was an unforgettable meal (just ask them for recommendations).

Special mention goes to the goose, which was sublime and full of fat.

When we finally got back to HK Island (after another bus to Tung Chung + MTR), we  headed to Yee Shun Dairy Company (港澳義順牛奶公司) (G/F., 506 Lockhard Road, Causeway Bay) to try the renowned egg custard with ginger (although it’s hard to tell in the picture below). 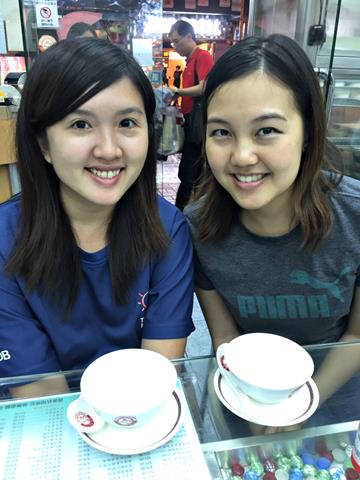 This hot dessert was so comforting! Their toast with condensed milk was also good but the fried chicken was average. I liked that the milk tea wasn’t too sweet.

When we got out it was raining very heavily (the T3 warning was still on) and it was very difficult to get a cab. We arrived back at Ginny’s place completely drenched – a crazy end to a crazy day!

[…] would expect from a signature dish, the roast goose was exquisite. Less fatty than the one we had the day before on Lantau Island (although that was pretty good too), and came with a very nice […]

Hong Kong: So Much Food, So Little Time – michwanderlust

[…] next: some weather-related (mis)adventures and more good […]

[…] Las Palmas! No need to do rain dances with me around – in that month alone I weathered (hah) a typhoon in Hong Kong and more rainy weather in […]