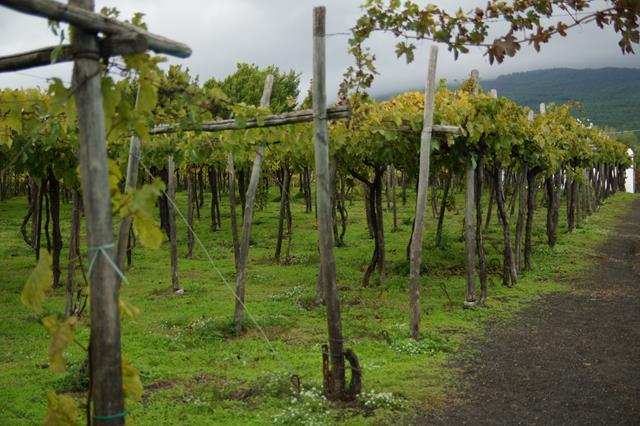 Some things just don’t change. Even in today’s world where the pace of change seems faster than ever, some things still hold true today as they did 2000 years ago.

Then, as now, there was a demand for good food and fine wine. Then, as now, volcanic soil was highly fertile. So today, much as they did 2000 years ago, people are living in the shadow of Mount Vesuvius, making wine and growing other crops.

One such vineyard is Cantina del Vesuvio, where we had an exquisite wine-tasting lunch after our visit to Pompeii. It was part of our tour package, but if you’re already in Pompeii, it makes sense anyway to have a nice lunch at the nearby volcano, doesn’t it?

Our visit started out with a short tour of the vineyard. It was October, so green grapes were slowly ripening on the vines. 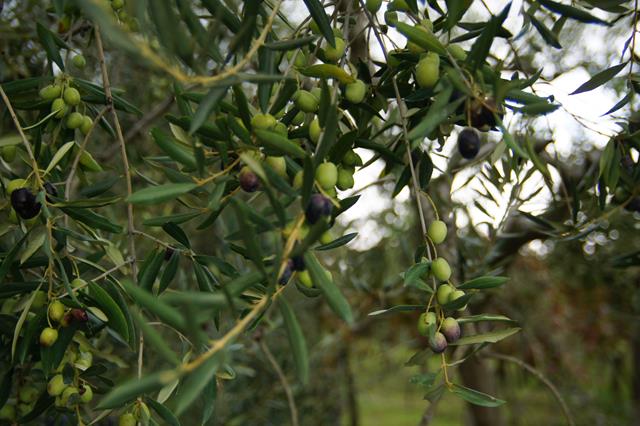 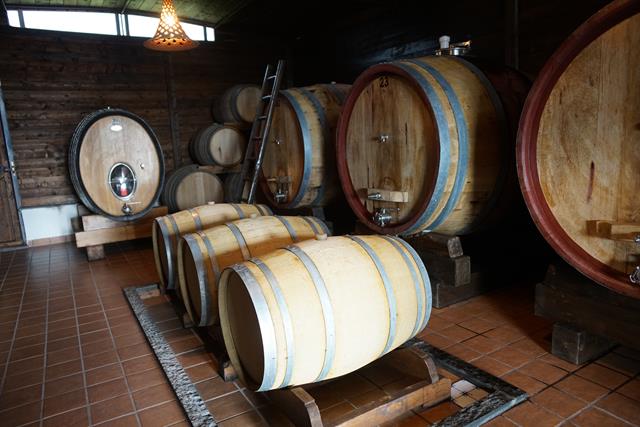 We also got to see where they peel the grapes, and where they store the wine. It’s Lacryma Christi wine.

I love how the entire production process seems to take place onsite, so by coming here you’re not just supporting local businesses (the food they serve is produced at nearby local farms). It’s also more environmentally friendly than eating food transported across hundreds or thousands of miles.

The first thing that struck me as we sat down to eat was the adorable water jug! It’s got to be one of the cutest I’ve ever seen. 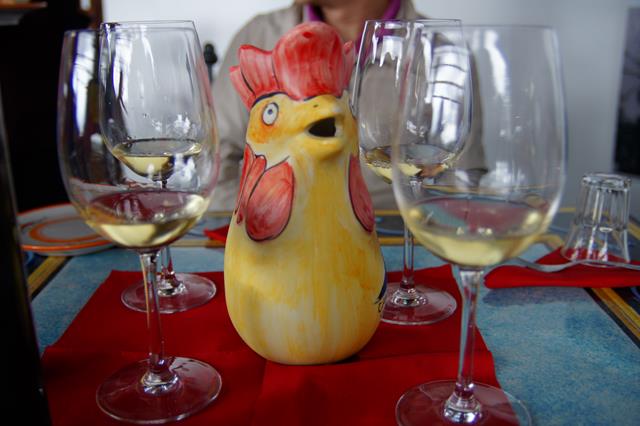 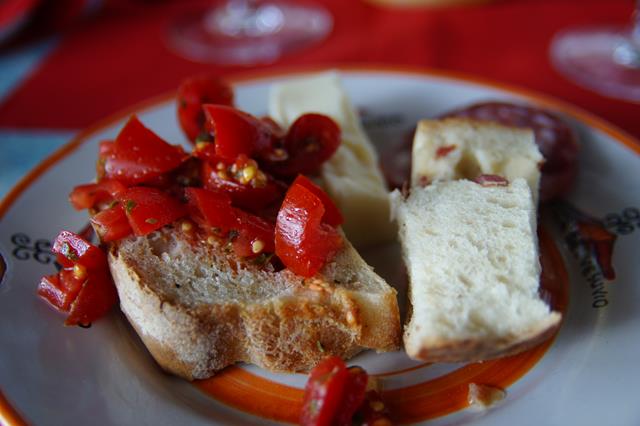 Our appetizer (bruschetta, cheese, a savory bread and salami) was paired with a white wine, followed by a rose and then a red. 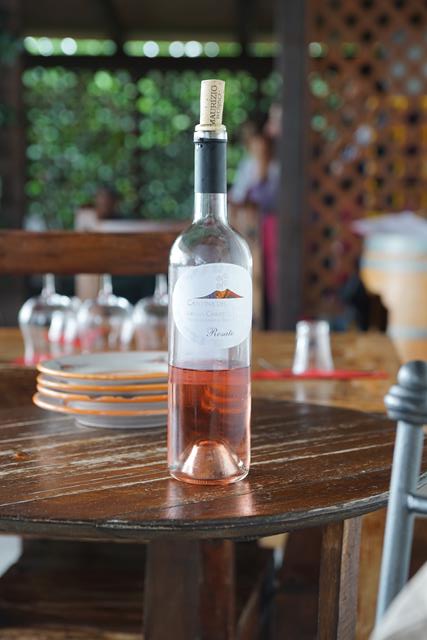 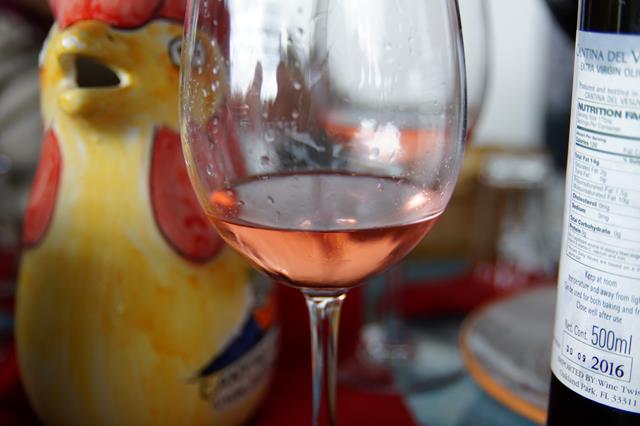 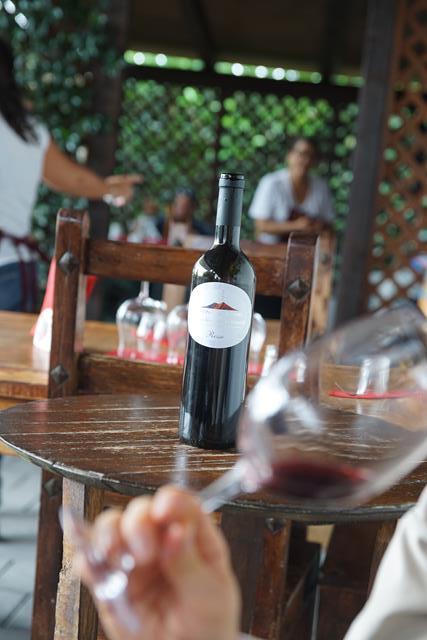 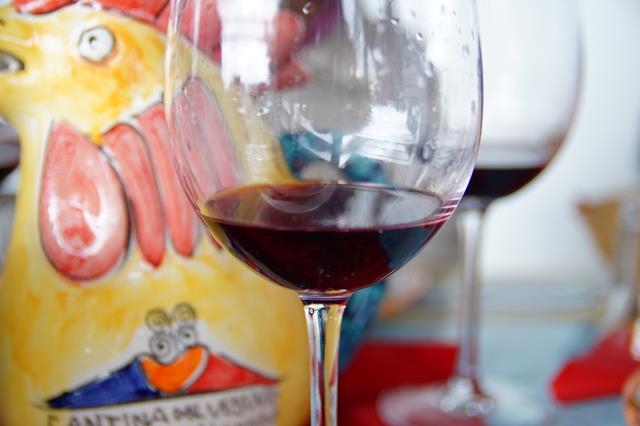 I am in no way a wine connoisseur, so I can’t really comment, but my friends thought the wine was excellent.

They also have their very own in-house extra virgin olive oil that goes with the appetizer! 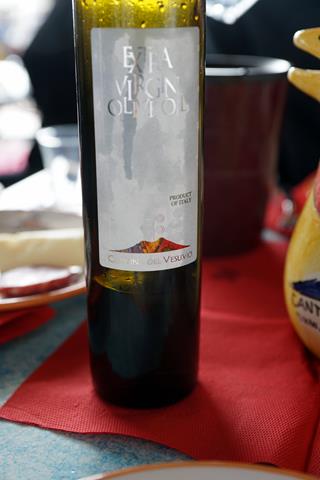 Next up: spaghetti, paired with a different red (a reserve, aged in barrels for 18 – 24 months). The reserve was generally preferred to the first red as it was more mellow. 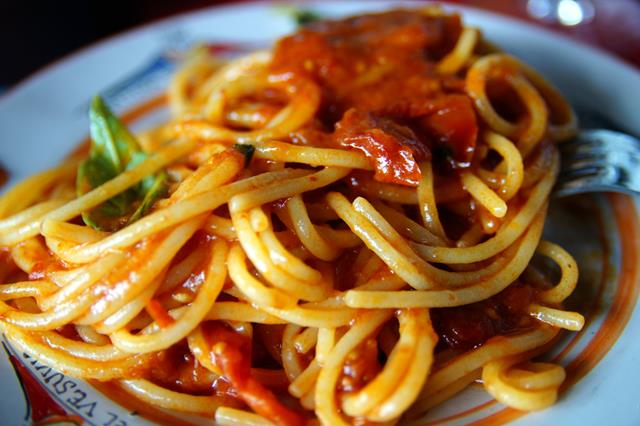 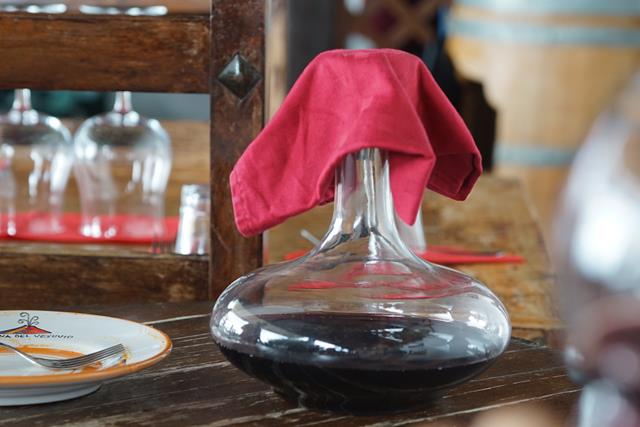 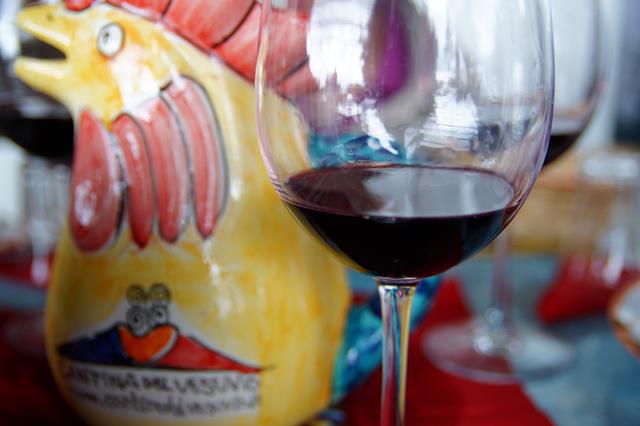 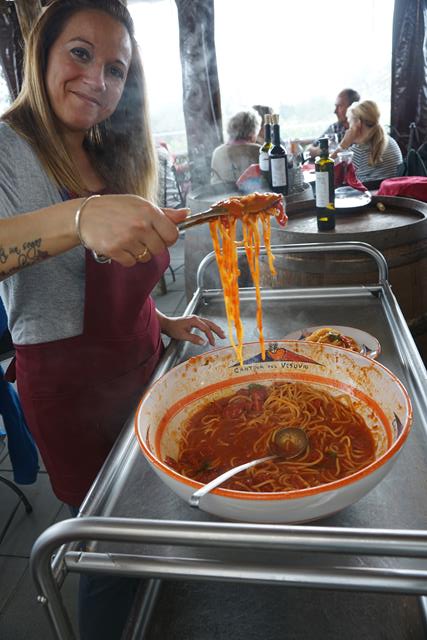 Finally, for dessert we had a traditional delicacy known as Easter cake. This was paired with apricot liqueur (more than 40% alcohol), which we just poured over the cake. The resulting flavours were delicious. 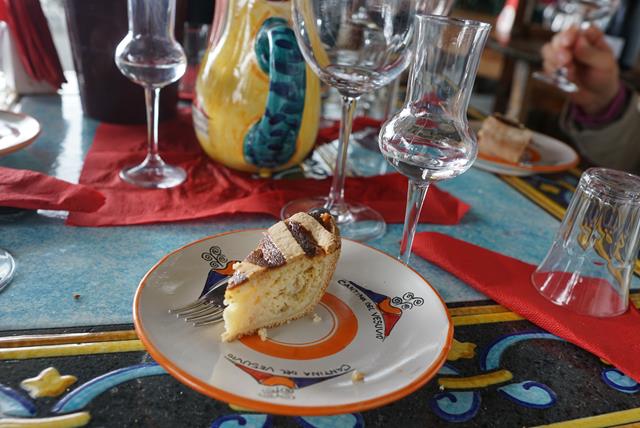 We had some time after eating to wander around the grounds a bit more and explore the shop. In the shop, you can buy the wines, the olive oil and even the cute water jug! 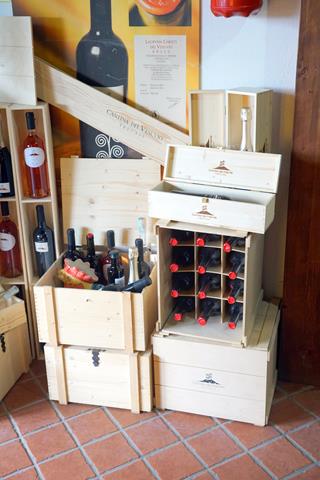 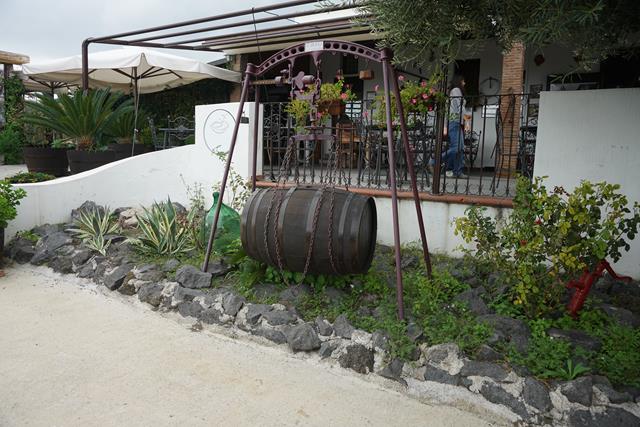 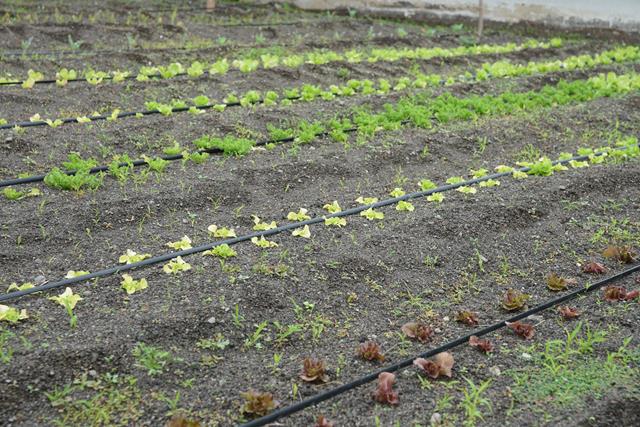 One of the highlights for me was the many dogs hanging around. 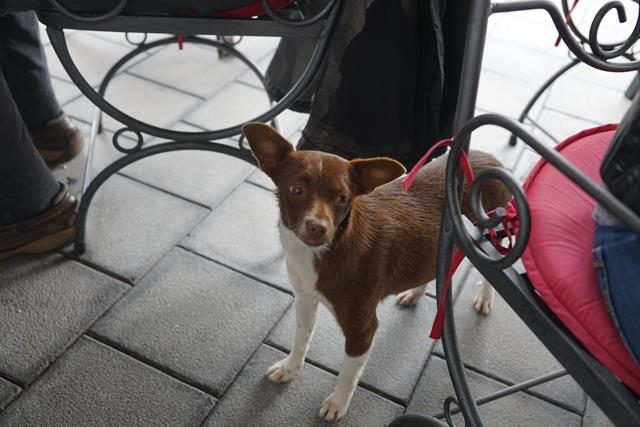 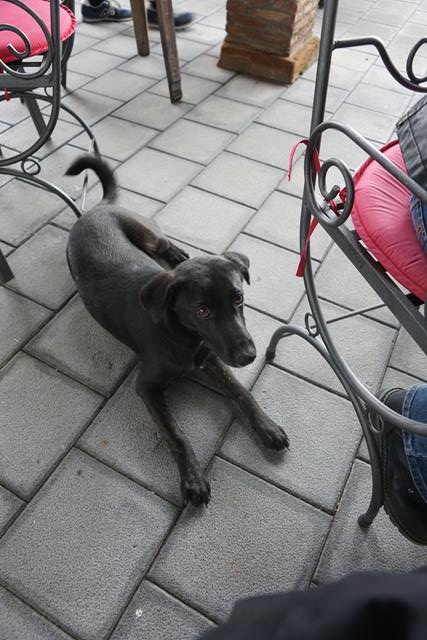 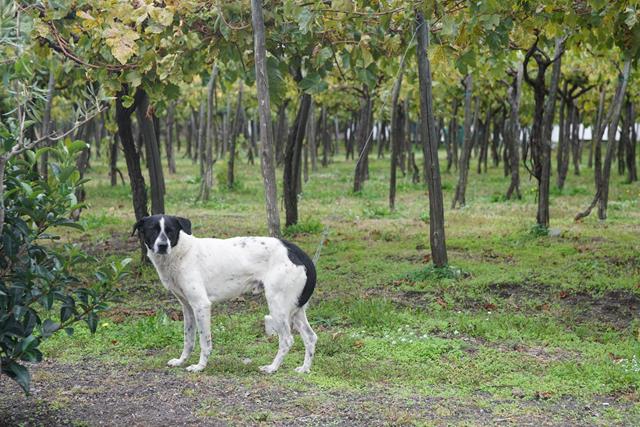 The original plan after lunch was to go all the way up Mount Vesuvius. The summit is a short walk from the carpark and you can even walk around the crater and look in!

Unfortunately, we couldn’t do so due to bad weather, so we headed back to Naples. On the way down, you are treated to amazing views of the coast. You can even see the island of Capri! 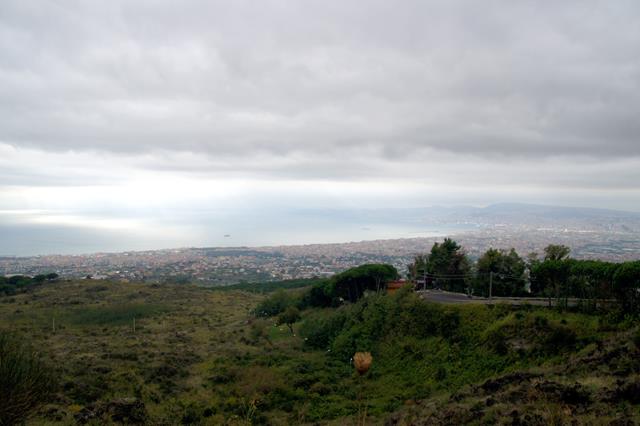 It would look more impressive if the sky weren’t all overcast.

On the way back, our guide Fabio told us very interesting tidbits of information about the history of Naples and the tumultuous relationship between northern and southern Italy. Culturally, they are very different due to southern Italy having been under the rule of so many different empires over the ages. Naples used to be a major cultural centre. Sadly, due to high unemployment in the region today, many young Neapolitans have had to leave to find work overseas. In 2012, youth unemployment rate in Naples was over 50%.

By this time in the afternoon, all the food and wine from earlier had kicked in (I’m a very lightweight drinker anyway) and it was almost impossible to stay awake. I struggled valiantly for a while as this is the type of stuff which interests me greatly. But eventually I succumbed. And thus we arrived back in Naples with 3 of us sleeping soundly, and only Annemarie (who’s German) retaining any semblance of alertness.

That was somewhat embarrassing, but the short nap did us good. We were good to go for our afternoon exploration of the National Archeological Museum of Naples. More on that later!

Have you successfully made it to the top of Mount Vesuvius or any other volcano? What was it like?? Let me know about it in the comments!

The tour and the food looked wonderful. I haven’t made it to the top of any Italian volcanoes, but our family has visited Mount St. Helens in Washington state. In May 1980, it blew it’s top. The destruction was amazing. Many places have recovered after 30 years, but it is still something to behold.

Thanks for your comment! That’s so interesting. I just read a litle about Mount St Helens. Seems it’s still considered an active volcano, like Vesuvius. they monitor it continuously for signs of volcanic activity and I guess they must do the same for Mount St Helens. That must have been a memorable trip!

I have been to the Volcano National Park in Hawaii which is quite amazing but not to Mount Vesuvius. We thought about trying to visit as a long day trip to Pompeeii from Rome but decided to save it for a future trip, as well as Naples. So we have many things to look forward to on a future trip to Italy:) ~ Jessica

Oh yes, Hawaii has lots of volcanoes doesn’t it? Yeah it seems a bit of a long trip from Rome! Naples isn’t terribly popular with tourists (not without reason) but i think it’s well worth a separate trip. So much history in one place!

This post is making me hungry. That pasta looks delicious! I never made it to Vesuvius when I went last summer, but it looks like I missed out.

It was indeed delicious! no worries, i’m sure there’ll be a next time. I see you went to Pisa 😉

[…] wasn’t actually on our itinerary originally. But because of the bad weather preventing us from going up to Mount Vesuvius, we ended up coming here instead with our tour guide Fabio. And I have to say – I’m not […]

[…] Visit Pompeii and Mount Vesuvius (if the weather permits) […]

I also fall asleep after wine tastings too!

What a cool experience. I love visiting farms & vineyards when I travel. Having a local food meal paired with local wine sounds ideal! I wish I’d known about it when I was in the area.

Yes, I really like the idea of eating local produce. So much better for the environment. Hopefully there’ll be a next time for you. Thanks for stopping by, Lauren!