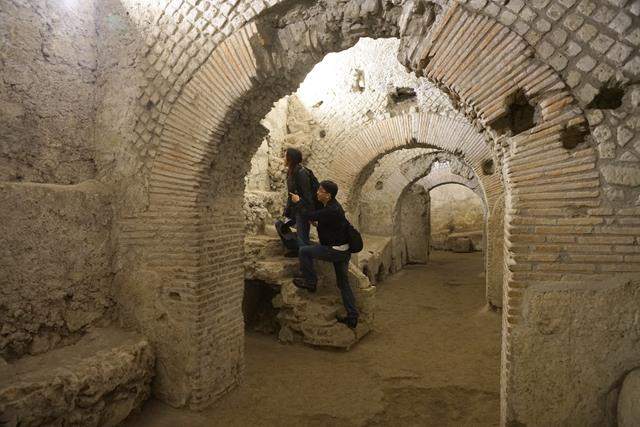 Naples is one of the most ancient cities in Europe and over the ages it didn’t really expand outwards, just upwards. People just kept on building on top of older buildings. It’s as if the city is layered, starting with modern-day buildings at the top, and going all the way back to Roman times about 10 – 40m below street level: a subterranean Naples lying underneath the city of today.

There are a number of fascinating underground sites you can visit, but as we only had a day for sightseeing (excluding our visit to the Naples National Archaeological Museum) we limited ourselves to a few stops. 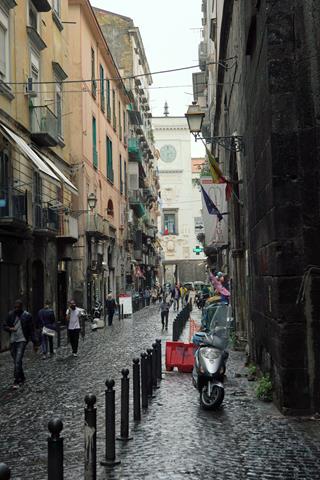 #1: Roman Market Square (underneath the Church of San Lorenzo Maggiore)

The church is located at the geographic centre of the ancient city and excavations have revealed the ancient market square underneath. 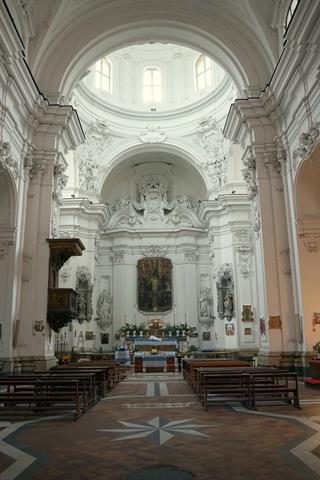 You pay a small entrance fee, descend a flight of stairs and do a self-guided tour through the marketplace. The entrance fee includes a brochure so we knew more or less what we were looking at.

This is where most of the trade and commerce would have been conducted, and you can see the bank, the bakery, the launderette – all lined up neatly in a row. 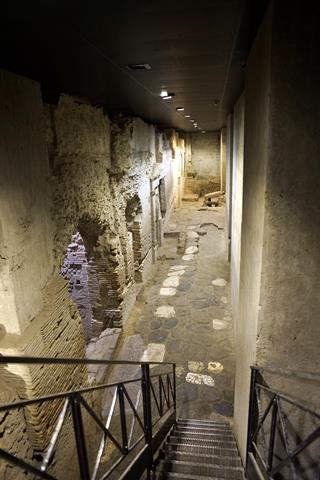 If you don’t get to Pompeii (which is a real pity and you should definitely go), you can also see the distinctive Roman-style bricks here. 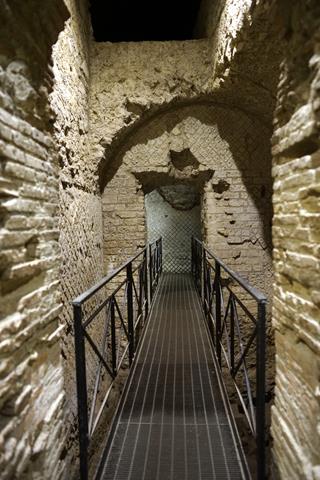 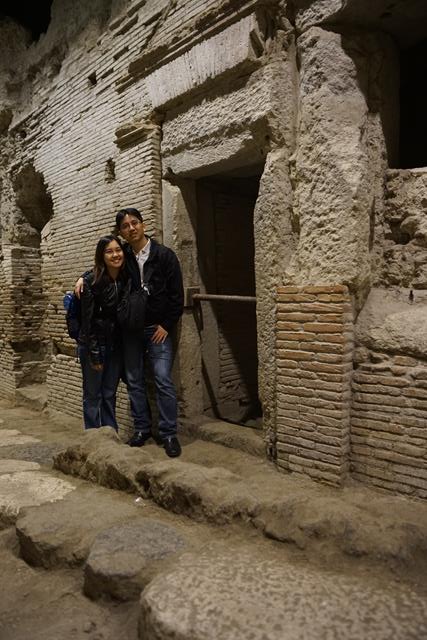 This was the bank, as you can tell by the metal bar across the entrance. Not sure how it would’ve kept ancient bank robbers out, but I’m sure it had its uses. 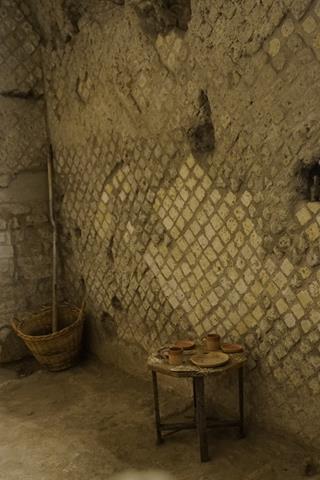 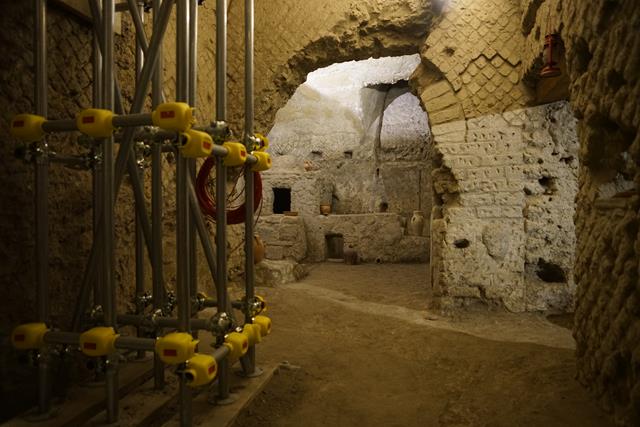 That is (if I recall correctly) the oven where they used to bake bread and all. 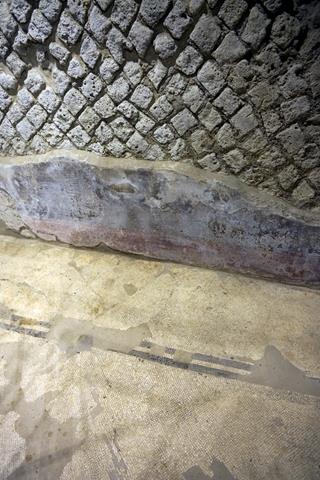 A thick layer of plaster and a floor mosaic, like the ones you can see in Pompeii.

One thing I liked was that there were very few other people around at 10 / 11am, so we had the run of the place and could take lots of silly pictures. 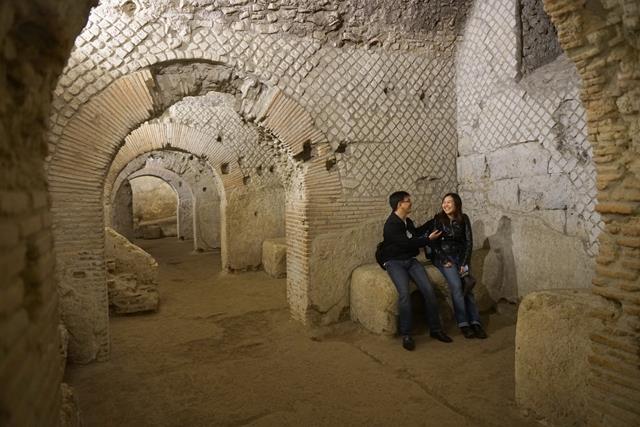 Recreating ancient times in the marketplace, where people would sit on those very benches!

Looking for the gateway to Narnia. 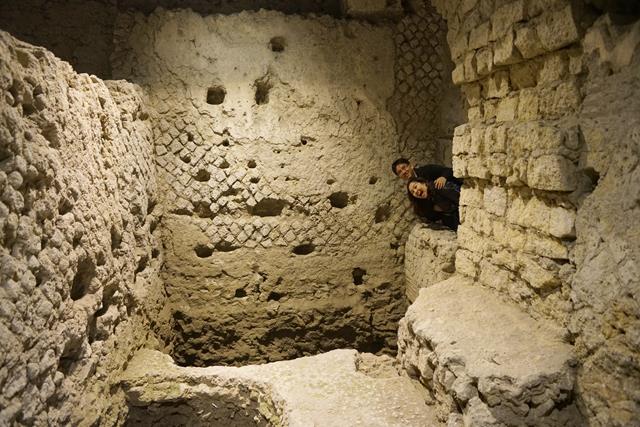 Entrance fee: EUR9 for the museum and excavations

This is a guided tour, which they conduct in various languages including Italian, Spanish and English (that I heard). It’s about 1.5 to 2 hours long. It was a little disorganised – we asked two staff members when the next English tour was and got different answers – but it was well worth it. Just remember that the English tour is the one with the biggest crowd 😉 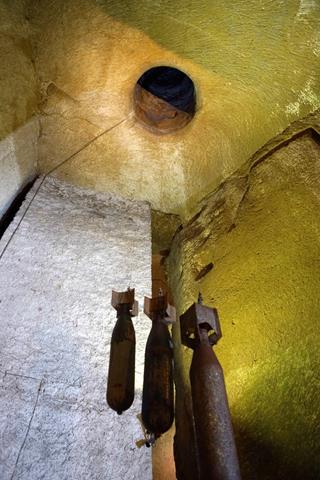 The tour started off at the aqueduct, which is so deep underground that it was used as an air raid shelter during WWII. Inside you can see some WWII-related displays such as a tank (which isn’t real – it was built as part of a school project).

Our guide also told us that the people of Naples used to use it as a waste disposal site, so over the years the caves got filled up with rubbish (old furniture and what have you). Because it was not practical to bring all the rubbish back up, the government eventually decided to compress it and that’s the surface on which we stand today in the caves! You would never know it, though. It looks entirely normal. 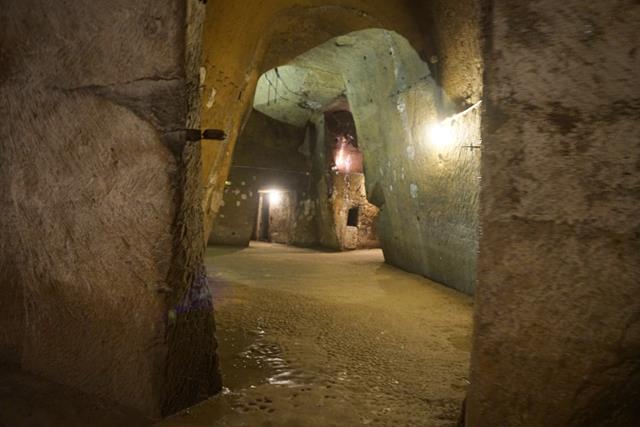 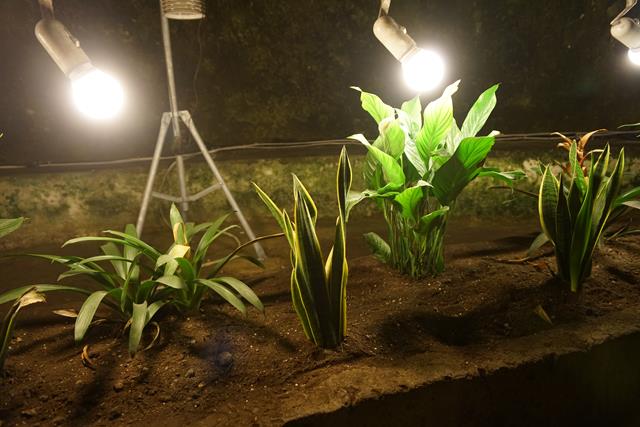 They have an interesting gardening project going on – it’s so humid in the caves (80% humidity) that these plants don’t need to be watered.

However, Singapore’s humidity is regularly above 80% so I didn’t find it humid at all. I definitely can’t get away with not watering my plants, though! 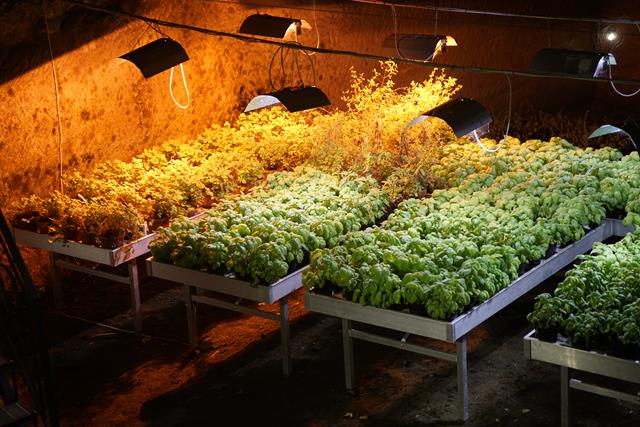 The next part is not for the claustrophobic: we were given candles and had to walk through a tunnel about 0.5m wide to get to a cistern. I was worried my backpack would get stuck, but it didn’t. They did warn that it would be very narrow and anyone who wasn’t comfortable could stay behind. 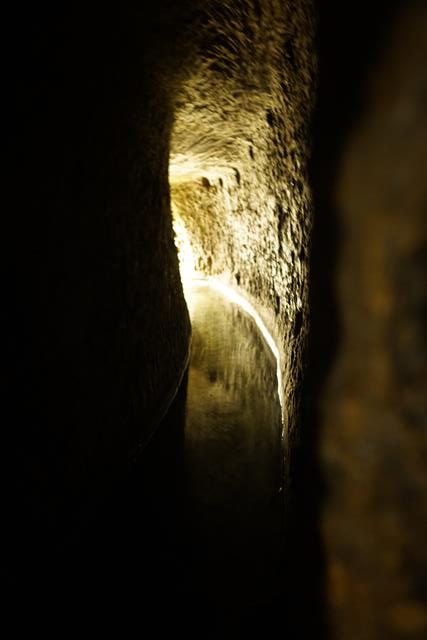 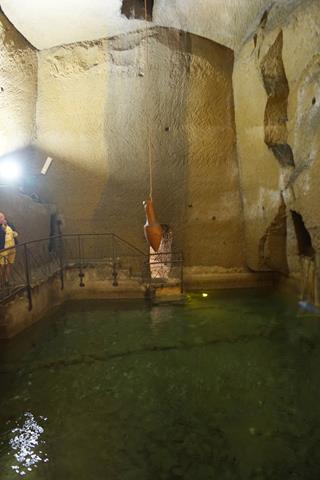 There were two types of cisterns: those for public use and more private ones for the exclusive use of wealthy families. Plus ça change, plus c’est la même chose…

The more things change, the more they stay the same. 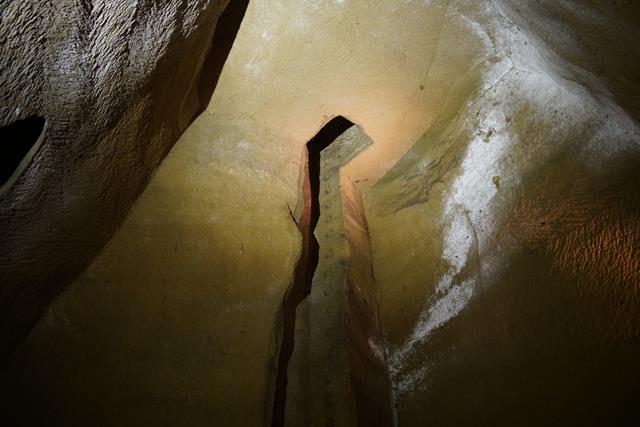 You can see the footholds used by the aqueduct cleaners. 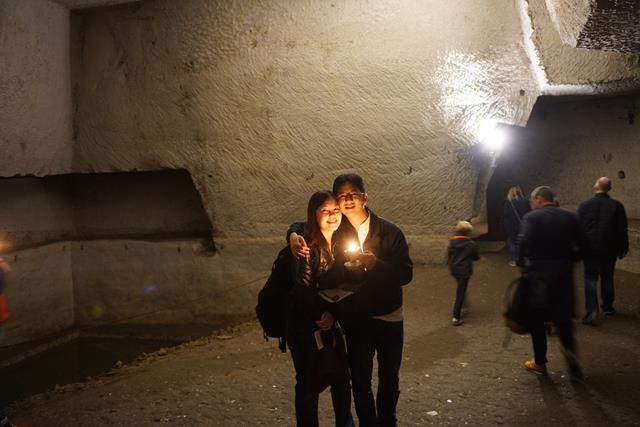 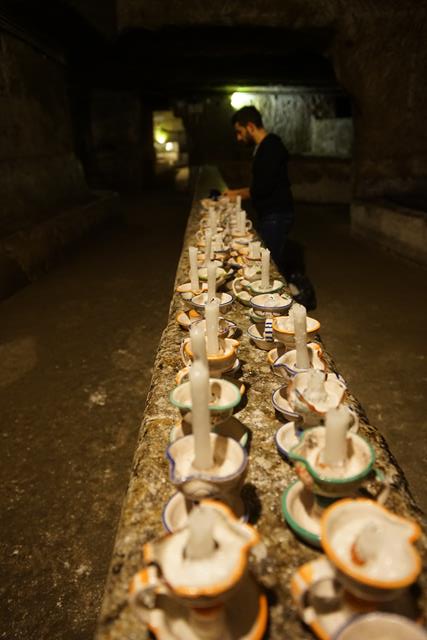 Finally, we visited a cellar which the Saint Patricia Order of Nuns used as a shelter during wartime. They also used it to store their homemade wine. 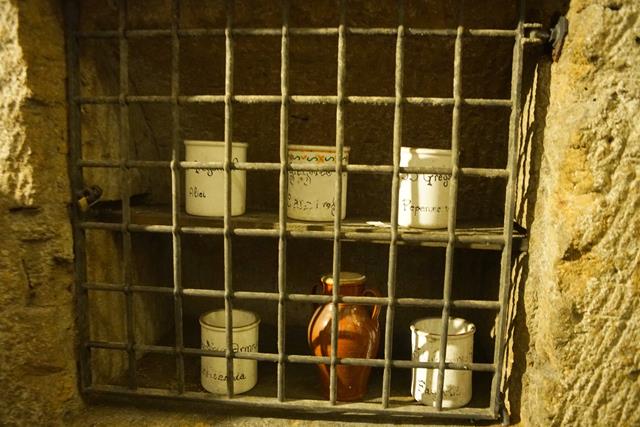 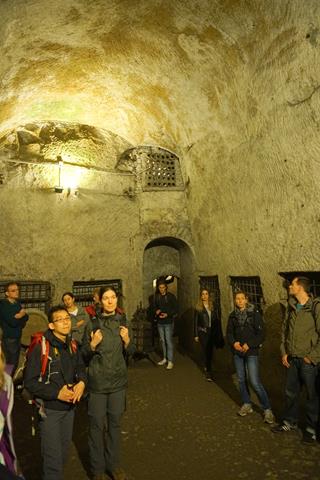 We then climbed a rather long flight of stairs back up to street level, where there is a small museum with somewhat random WWII memorabilia. 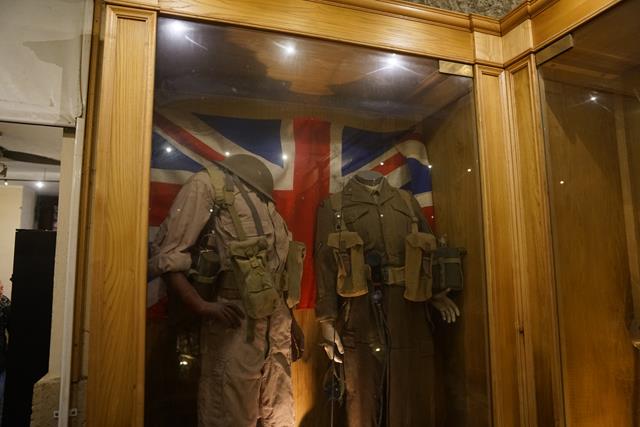 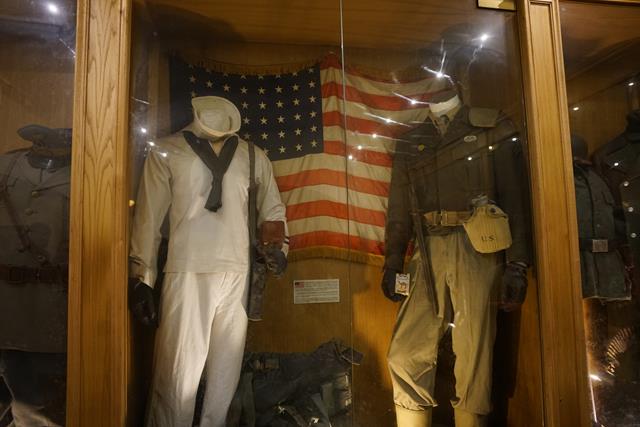 The next stops on the tour were to visit parts of a Roman theatre a few blocks away. Unfortunately for us, it was raining (I seem to have pretty bad luck with weather) and we didn’t have umbrellas so we got soaked. Lessons learnt: (i) hats (even baseball caps) & leather jackets are pretty darn useful (in the absence of umbrellas or ponchos); and (ii) jeans take forever to dry.

Don’t expect to see an entire theatre – it’s just small parts of a theatre that must have been huge. You really have to use your imagination for this one. Interestingly, given the way Naples was built, you can still see the outlines of the theatre on a street map today, in the form of houses lined up in a semi-circular fashion.

The story of how they discovered it is very interesting and involves secret wine cellars. Can you imagine using part of a Roman theatre as a storage facility for your wine?! 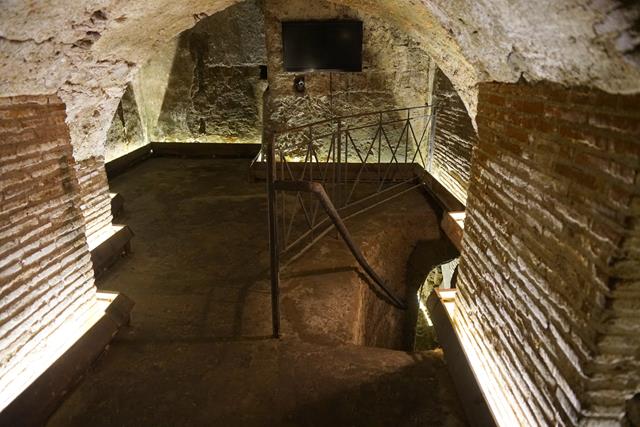 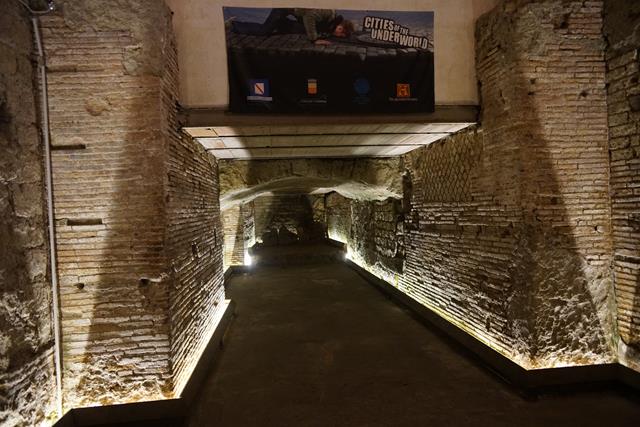 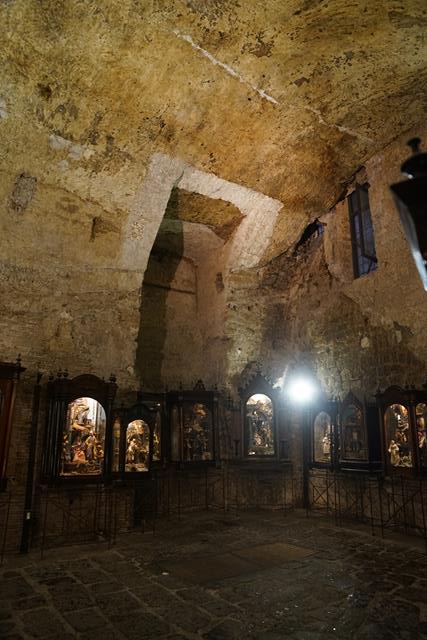 The final stop (still part of the Roman theatre) also has some Nativity scene-type installations, which are very Neapolitan.

I find underground cities fascinating, and they can be found all over the world! I really enjoyed the one in Edinburgh too. Have you ever visited a subterranean city?

Thank you! It was indeed 🙂

This exhibition has to go on my ‘bucket list’ – thanks :-o)

thanks for stopping by! hope you enjoy the underground world as much as I did! =)

We visited the Church of San Lorenzo and loved it, but we were in Naples for one day only and didn’t have time to visit the underground sites. Now that I read your post I see how much we missed, but I am kind of claustrophobic and that narrow tunnel would have freaked me out. The cisterns and the gardening project were so interesting! However, seeing this site makes me think how horrible the war is. I hope we won’t have to live through another world war again.

I hope so too, Anda. Sadly, there’s a lot of money to be made waging wars and I think a lot turns on how Americans choose in November. The rest of the world will just have to wait and see – there’s nothing we can do.

Wow! This is an completely unexpected part of Naples for me – thanks so much for introducing me to it. Great to see Roman sites under the city. I explored Naples a long time ago and loved the city but missed out on its underground secrets.

I think my experience was kind of the opposite – I probably spent more time sightseeing underground than above it! well, that’s an excuse to revisit =) thanks for stopping by!

Wow. Thanks for this glimpse into underground Naples.

Glad you found it interesting! Thanks for stopping by, Ahila!

[…] It started pouring shortly after we arrived and we took shelter at the nearest restaurant, El Populacho. It doesn’t normally rain much in Gran Canaria, but during our stay it rained so much that there were floods in Las Palmas! No need to do rain dances with me around – in that month alone I weathered (hah) a typhoon in Hong Kong and more rainy weather in Naples. […]