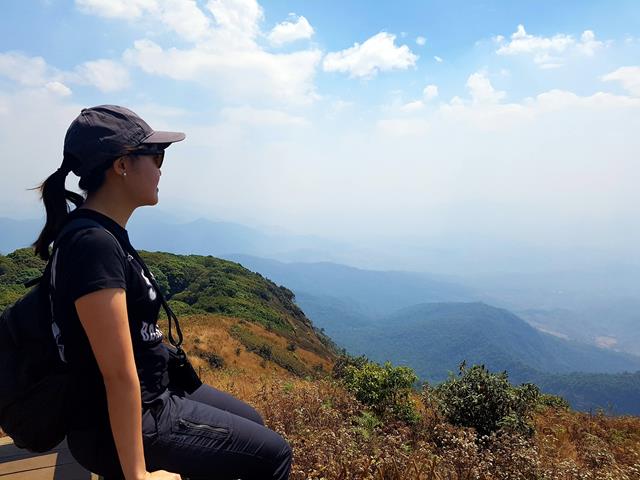 When we were planning this trip, my friend Terence had one goal (and one goal only): to go stargazing at night. With the massive amount of light pollution back home in Singapore, we figured our best bet would be to spend a night up on Doi Inthanon (the highest mountain in Thailand), far away from the bright lights of Chiang Mai. The forests around Doi Inthanon make up the Doi Inthanon National Park.

We accordingly booked a two-day tour of Doi Inthanon with Next Step Thailand, and set off bright and early at 8am.

The first stop was at a market where our guide, Sam, bought supplies and we bought bananas – 2 bunches for only THB20 (less than SGD1)! We spent the next two days trying to finish them.

We then visited this project, which is an initiative by the Thai royal family to encourage hill tribe farmers to cultivate cash crops instead of opium. The farmers can get vegetable and flower seeds here. 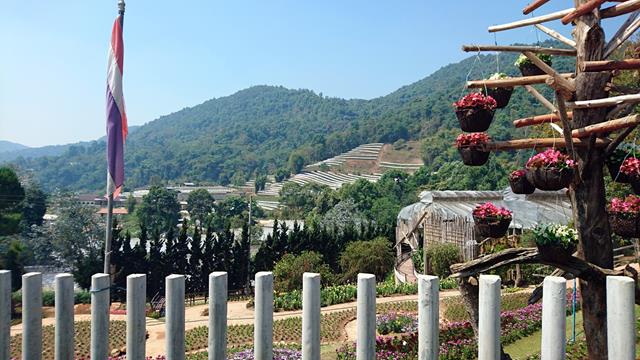 It resembled a massive garden. 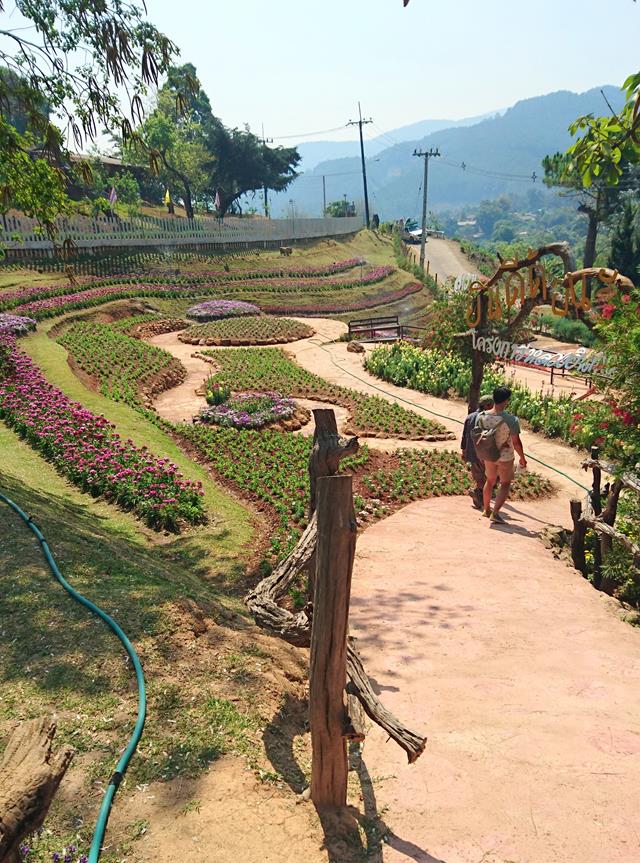 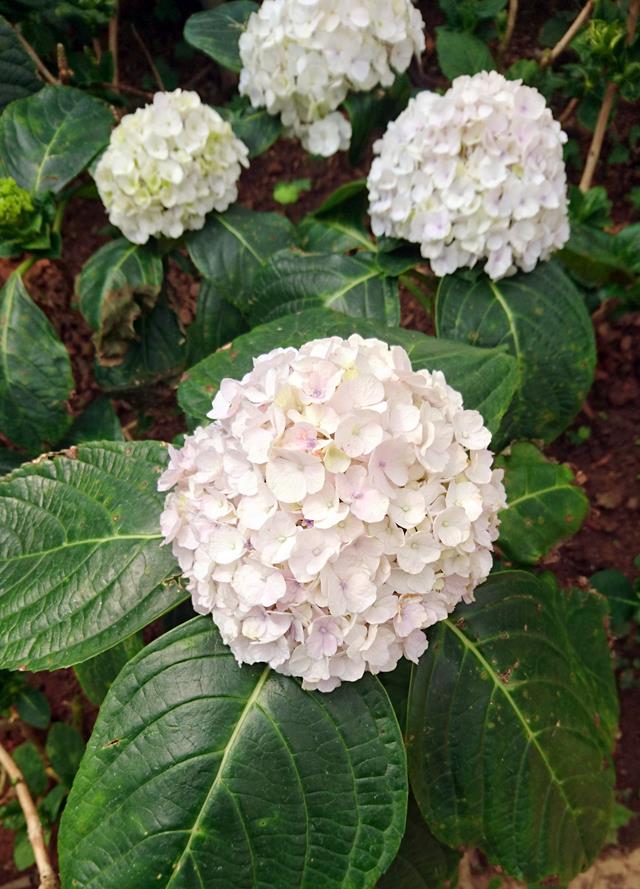 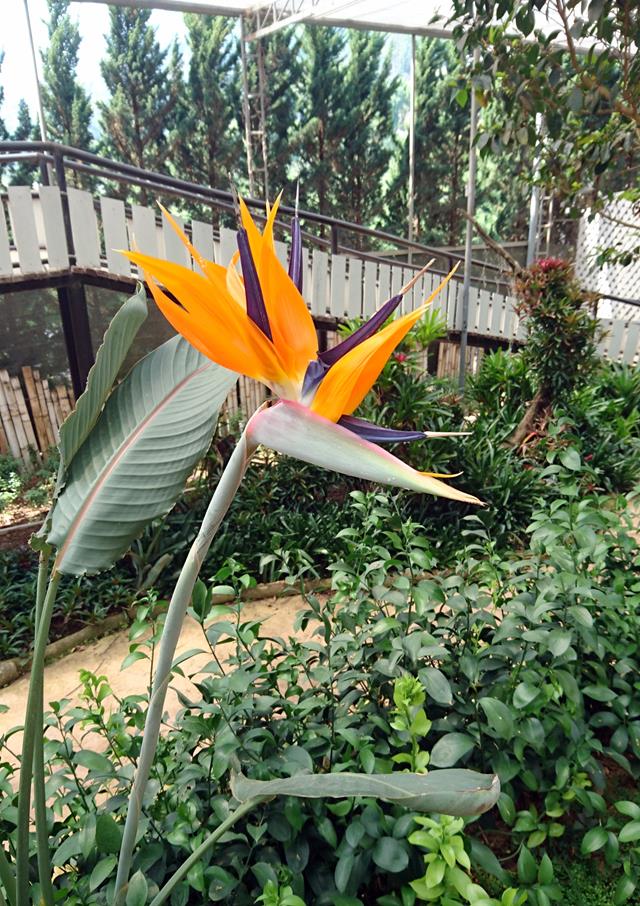 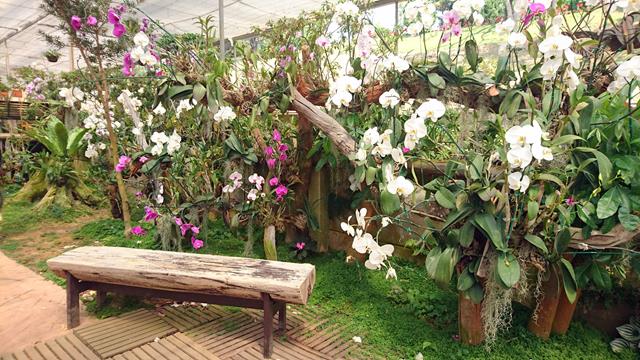 A lake with swans in it – can you spot them? 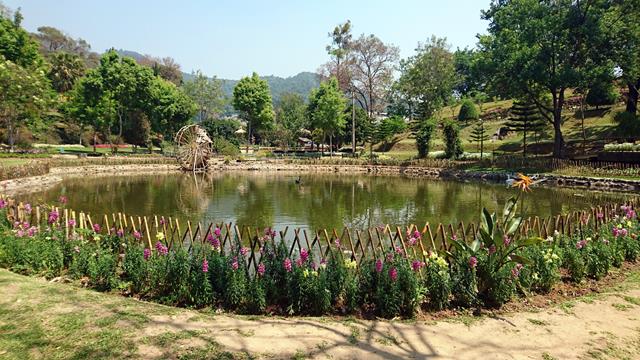 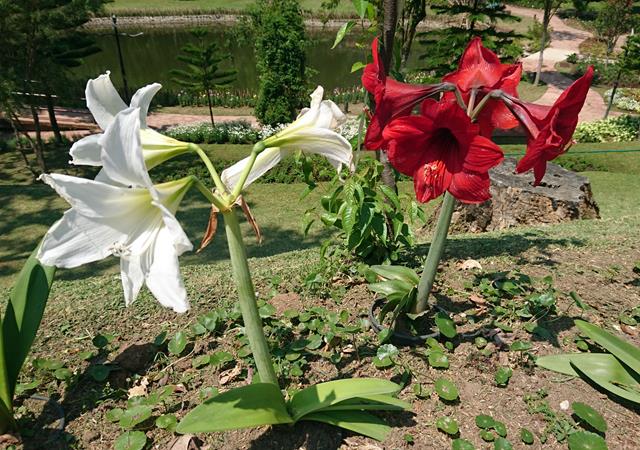 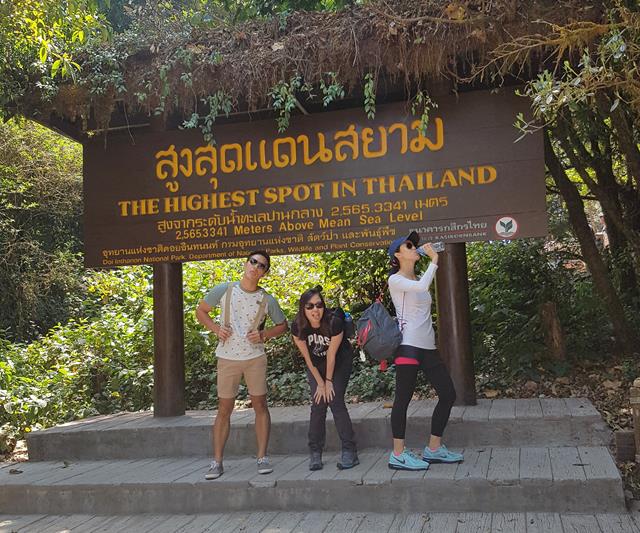 That’s us, after being driven most of the way up.

At the summit is a memorial to King Inthawichayanon or Inthanon (from whom the mountain derives its name), one of the last kings of Chiang Mai. It used to be known as Doi Luang or Doi Ang Ka. 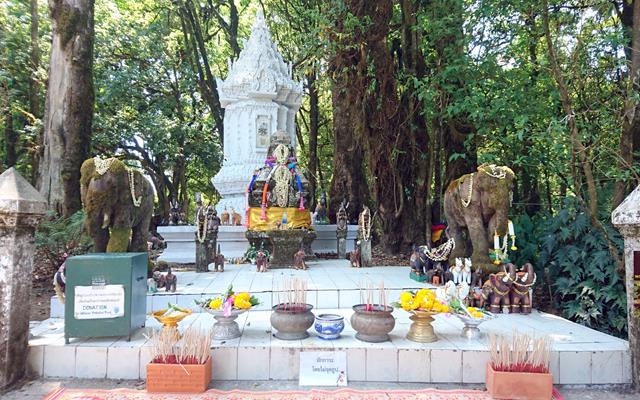 There’s a short trekking path nearby – just a warm-up for the treks to come! 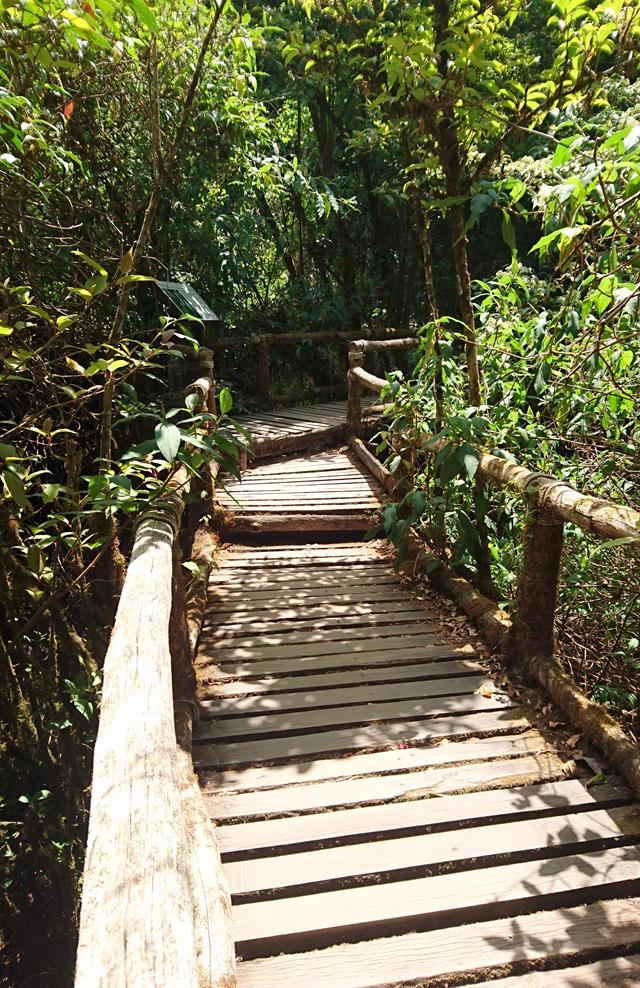 At the end of the path is a memorial for a helicopter pilot who crashed here. 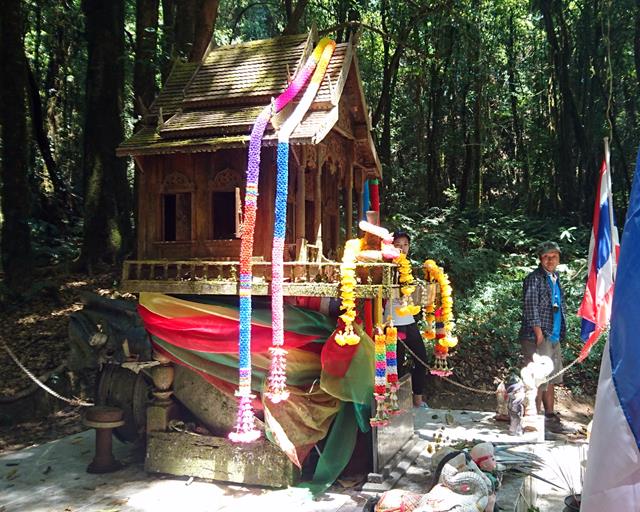 Sticky rice, Thai sausage, grilled chicken and pork, and fresh mangoes. I loved the Thai sausage and the mangoes! 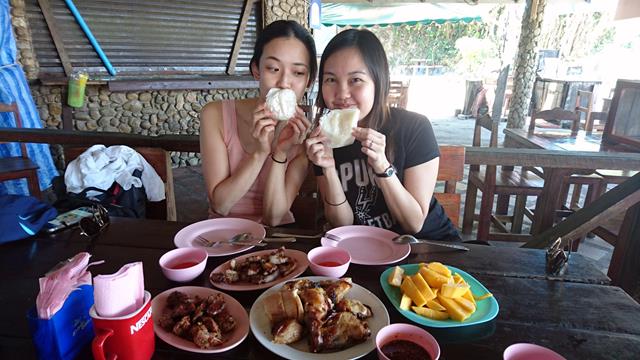 This helped us complete our next hike:

This takes about 2.5 – 3 hours and a local Hmong guide is mandatory. One side of the mountain is cloud forest (bear in mind we were there during the dry season – if you go during the rainy season, you’ll be able to see clouds among the trees): 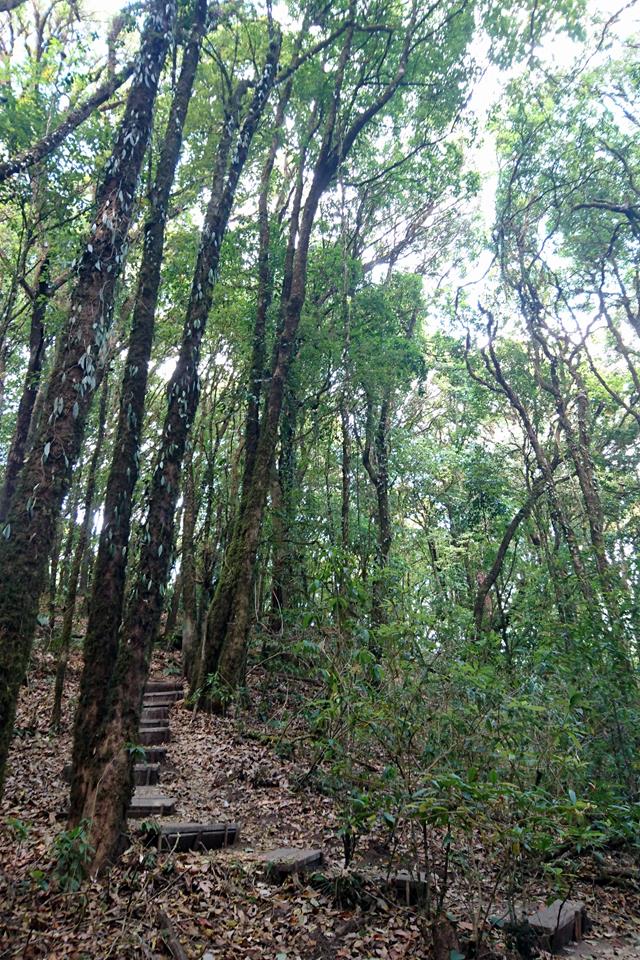 While the other is semi-alpine meadow: 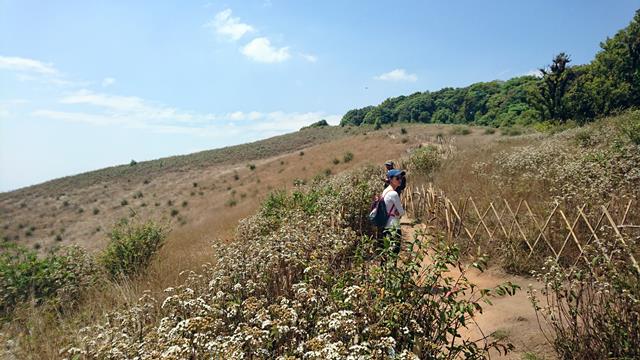 The view was partially obscured by haze, but it was still breathtaking.

Unfortunately, I didn’t get the yoga poses memo: 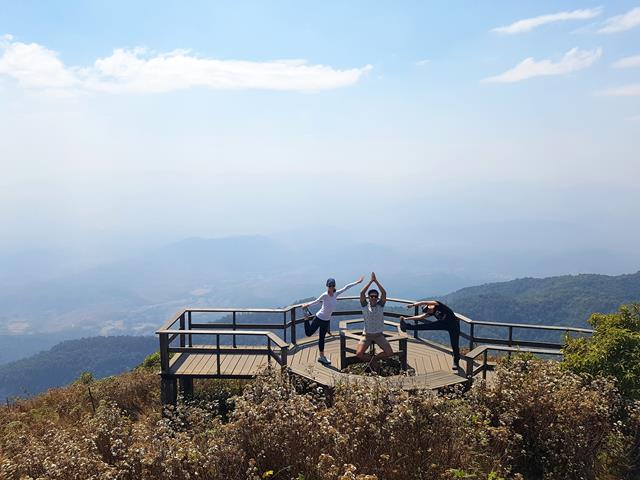 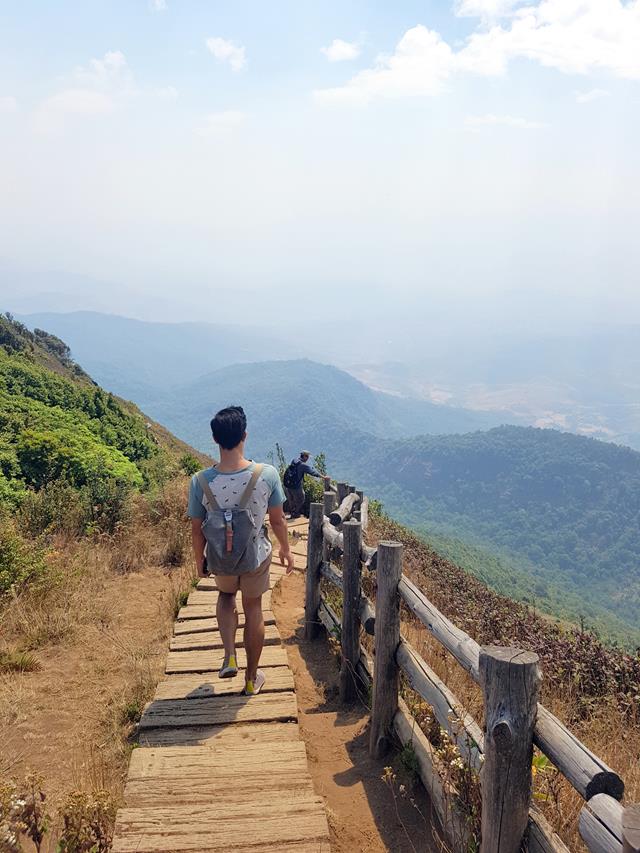 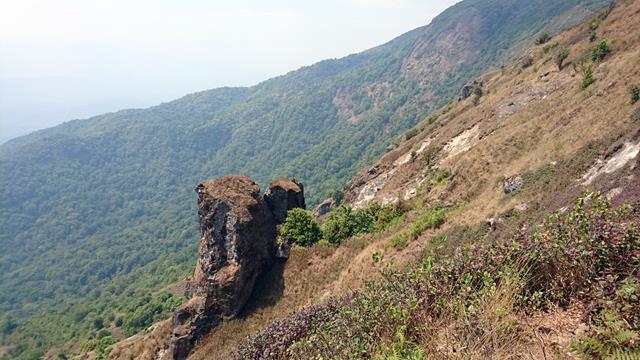 The terrain is quite uneven with steep inclines at times. It was embarrassing how out of shape I was. I kept telling myself that the breathlessness was partly due to the altitude, though! The views were very rewarding – totally worth it.

These were built by the Thai Royal Air Force to commemorate the King’s and Queen’s 60th birthdays. The King’s pagoda (at the far end) is slightly bigger, but they are both beautiful and surrounded by the most gorgeous gardens. I personally think the Queen’s gardens are slightly nicer, but the King’s has better views. 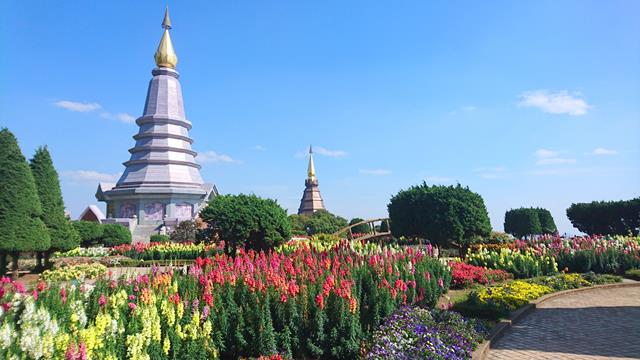 Did you know that you should always walk clockwise around pagodas? View from the Queen’s pagoda below: 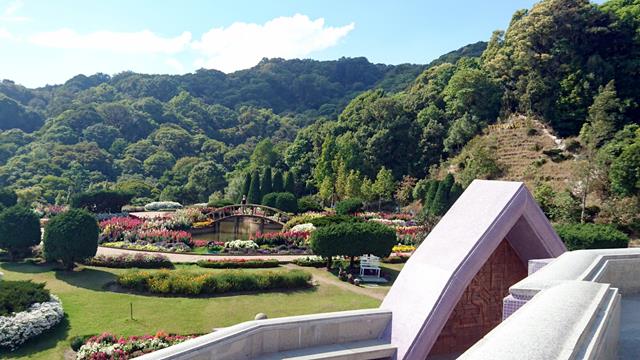 This place is so photogenic, I wish we had spent more time here. But time was moving on and we had to start our final trek of the day.

To get to the village where we’d spend the night (Baan Mae Klang Luang), we trekked about 1.5 hours. It was much easier than the Kew Mae Pan trail. A local (Karen) guide is mandatory here as well. This is a great way for the local communities to benefit directly from tourism! We went mostly downhill, which was great. The best part of this trek was the numerous waterfalls. 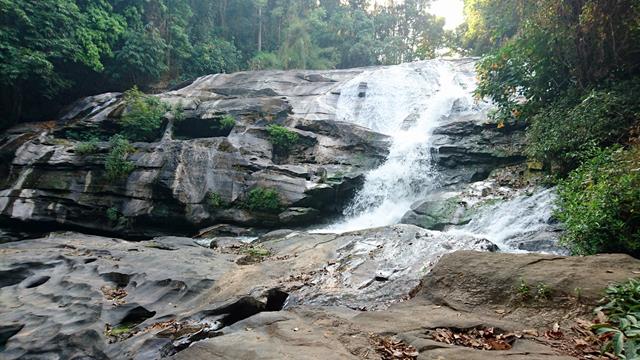 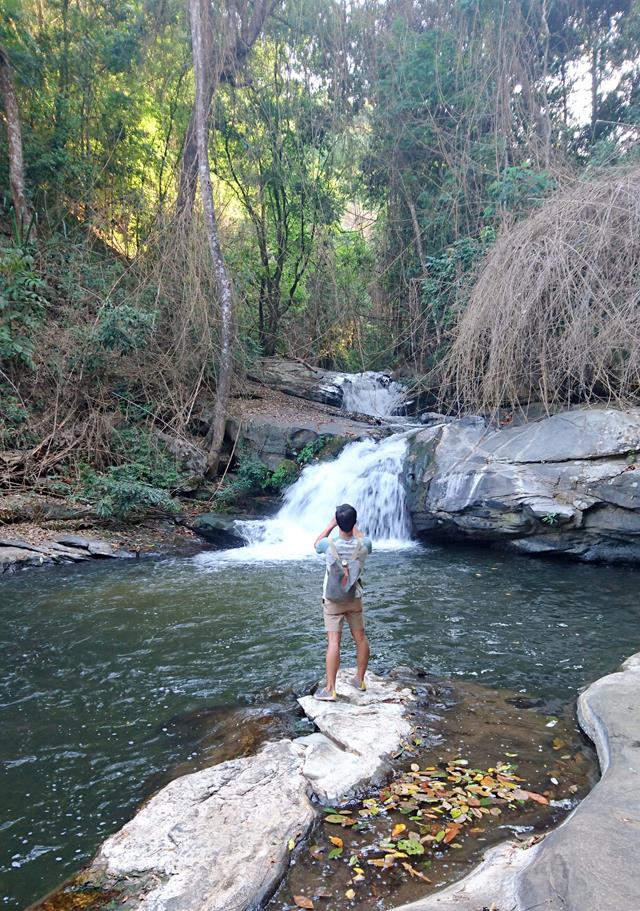 You can actually swim in this pool but be warned – the water is fairly cold. 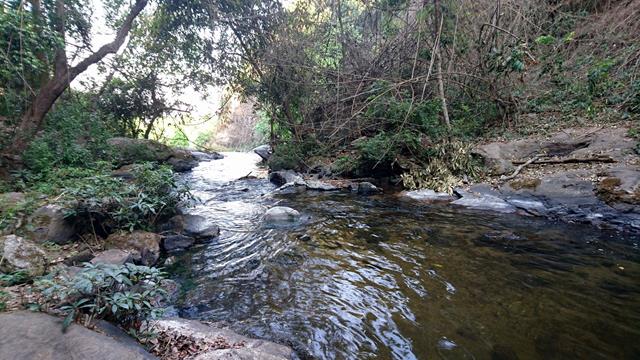 Some signs of a potable water source: a cup and a makeshift tap! 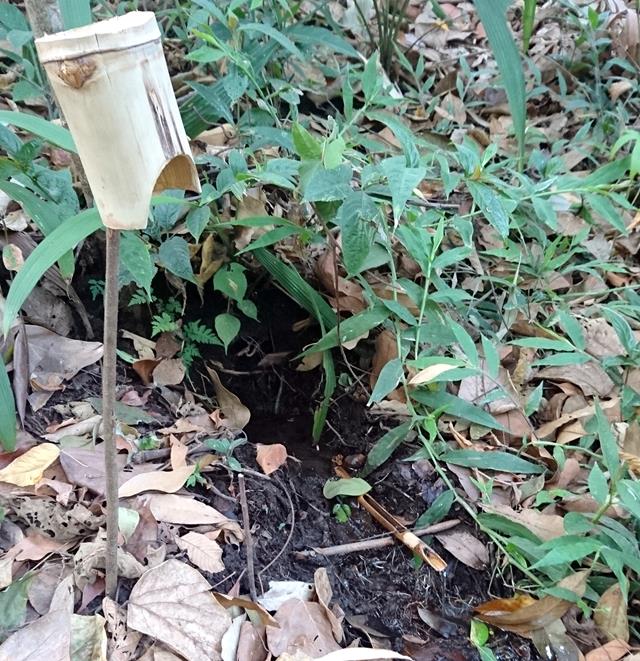 We crossed some padi fields, which had no rice growing as it wasn’t the rainy season. The villagers let cows graze there to act as a natural fertiliser. 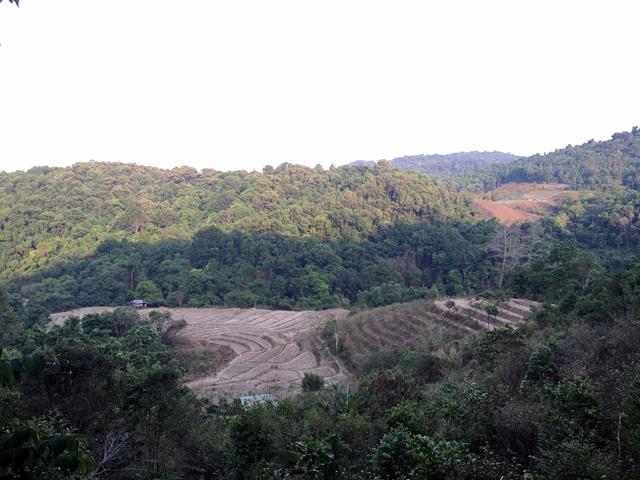 The going was, shall we say, interesting at times – I’m not the most sure-footed person around so I had to concentrate quite hard! (The structures do seem to be fairly sturdy though!) 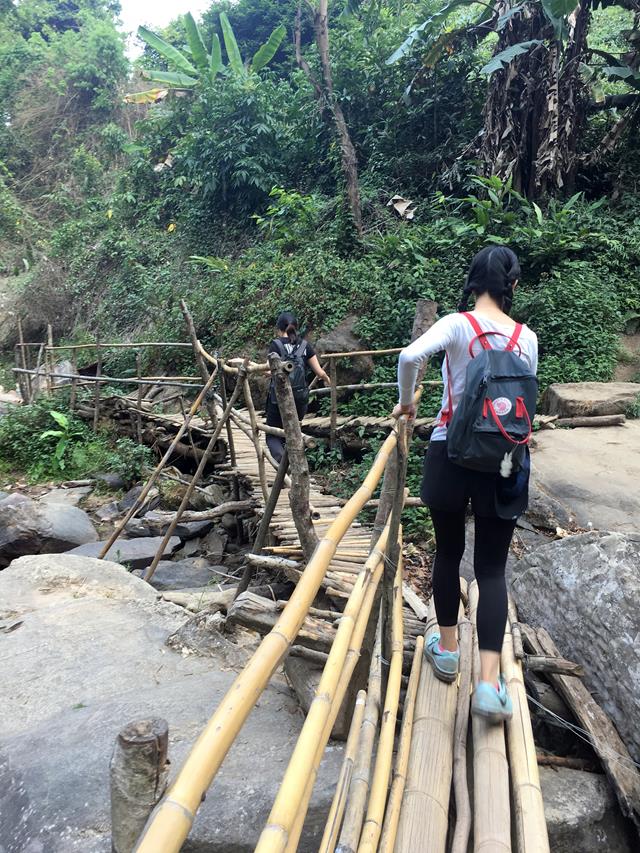 By this time, my feet were screaming in pain from the hours of walking, notwithstanding that I’d invested in a good pair of hiking shoes! (Pro tip: bring good hiking shoes!) Once again, however, we were rewarded with amazing views. 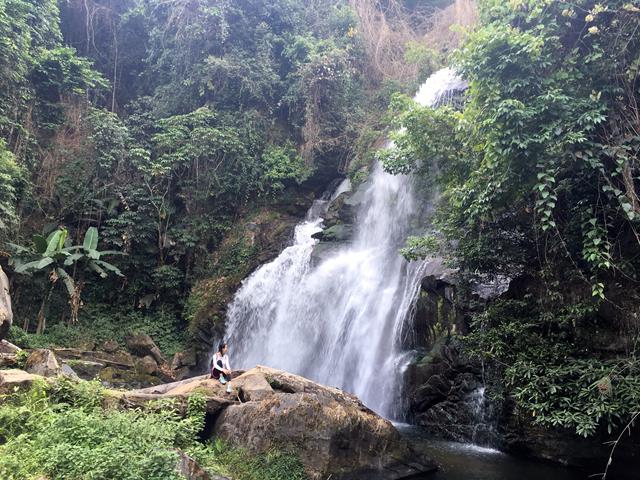 Other interesting things we saw: honeybee hives, latex trees and the tamarind plum fruit. It’s extremely sour but with a sweet aftertaste! The dried version is a popular snack in Thailand.

Just to clarify, vehicles can and do drive into the village. The villagers don’t have to hike for 1.5 hours just to get out onto the main road! We just took the scenic route 😉

Next up (because I’m aware that this is a lot of photos): our homestay in the village!

Where’s your favourite place to hike in the world? Let me know in the comments! 🙂

Wow, breathtaking views! I usually hike in sneakers because I have not found a good pair of hiking boots.

They were breathtaking indeed, Anisa! I can only imagine how much more incredible they’d have been if it hadn’t been for the haze! It’s possible to do this hike in sneakers if you’re very surefooted – my friend slipped once but that was it.

Lyn (aka) The Travelling Lindfields

Don’t under-estimate the effect altitude can have on your fitness when you live at sea level. David and I are reasonably fit but we live at sea level and notice the difference when we cycle in places which would seem that high to many people.

Author
Michelle | michwanderlust
Reply to  Lyn (aka) The Travelling Lindfields

Doi Inthanon National Park looks fantastic! It’s interesting to hear that those pagodas were erected just got the birthdays of the queen and king.

It was really amazing, Anda! There’s lots to see even if you don’t want to hike for hours. The reverence and respect the Thai people have for their king is really incredible!

This is one of the reason I want to go back to Thailand and spend some time around Chiang Mai. I visited the cities but I would like to explore more of the natural soaces (which by the way, are gorgeous).

The natural spaces definitely have their own charm and character! Hope you get to visit again =) thanks for stopping by, Ruth!

The Kew Mae Pan trail and the trek to the Karen Hill tribal village looks lovely. Looking forward to reading about your homestay in the village.

Thanks, Ahila! It was tough but rewarding =)

[…] a long and arduous day of trekking, we reached the Karen hill tribe village of Mae Klang […]

Wow, it looked like a great hike. How long did it take or to get to from Chiang Mai city center?

Hey Astra, it was indeed one of the highlights of my time there! 🙂 It’s about a 2-hour drive from Chiang Mai city.

Cool, thanks for the info. I will definitely be checking it out. 🙂

[…] an abundance of outdoor adventures to be had in Chiang Mai. We went on a 2-day trek in Doi Inthanon (including a village homestay), and we also considered white water rafting and rock climbing, but […]

[…] ranges from 2,5oo – 2,850m above sea level – that’s higher than Doi Inthanon (which I climbed in March), the highest mountain in Thailand! I’m really thankful that I haven’t got altitude […]

Thank you so much for dedicating an entire post to this hiking adventure. Much appreciate. I am not much of a shopper and more of an outdoor person, so i was researching what else to do beside checking temples, bathing & feeding elephants in sanctuaries. I love your itinerary and hope i get to do the same one.

Hey Sylvia, so glad that you found this post useful!! There’s actually quite a bit of hiking around the area, but I only had time for Doi Inthanon. I highly recommend Next Step Thailand – they offer personal tours, so you can customise the itinerary as much as you wish! Plus I could see a genuine effort by them to be eco-friendly and reduce plastic usage, which was great. Hope you have a great time in Chiang Mai! Thanks for stopping by 🙂