After a long and arduous day of trekking, we reached the Karen hill tribe village of Mae Klang Luang. 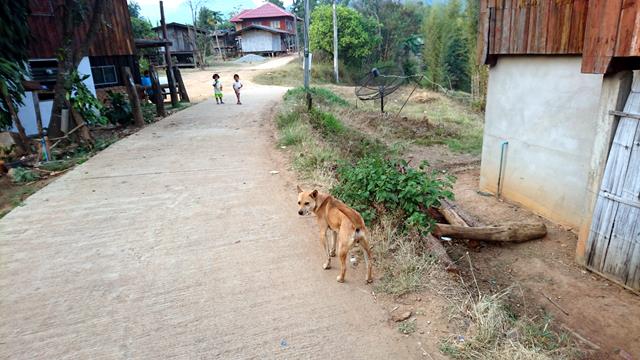 (This dog bears an uncanny resemblance to my own! Southeast Asian street dogs one and all)

We saw pigs, dogs, cats, chickens and geese. Most of them are free to roam, but stick close by because they know their own territory and have to defend it against other animals. 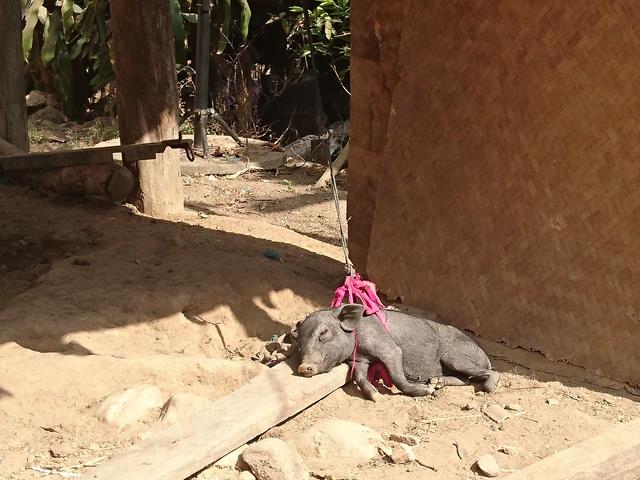 with the biggest pig I’ve ever seen in my life (below). Whoa! 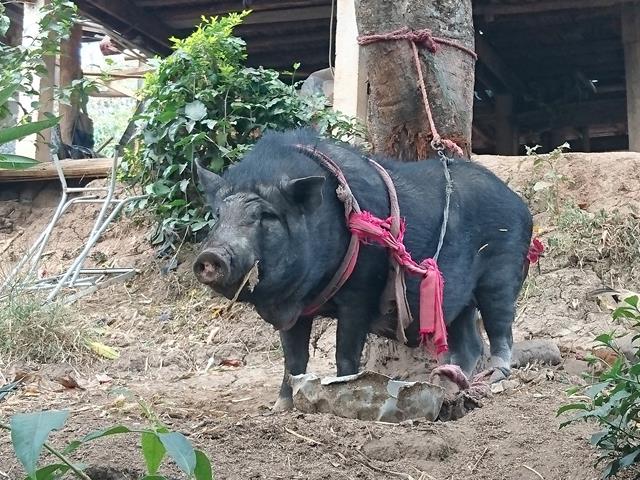 These piglets were so cute! That’s me taking a picture of them:

We discovered that our guide, Sam, is actually Karen himself but from another village. It helped immensely because the older villagers don’t speak Thai. The younger ones do, but many of them are now working in the city or attending high school in a bigger village. Urban migration: a recurring theme all over the world.

Some women wear traditional garb (a pink skirt means they’re married; otherwise they wear white). However, the men and the children mostly don’t.

I bought one of these handmade shawls for only THB250 (SGD10)! You can find shawls (many of them cheaper) at the Chiang Mai markets, but I liked knowing where and how mine was made.

We stayed with a middle-aged couple (their children are working/studying elsewhere). Our room for the night (don’t expect a hotel): 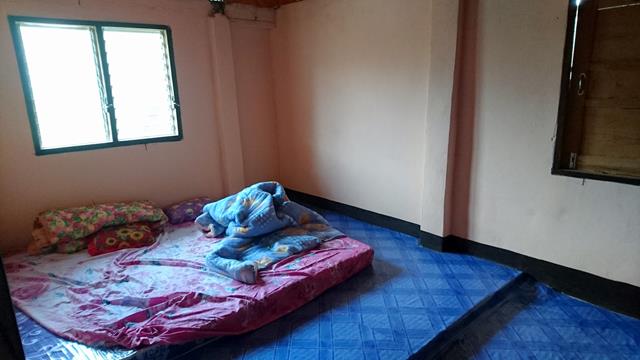 The mattresses were quite hard but I slept alright. My main concerns were the flies buzzing around, and the roosters that started crowing triumphantly and unstoppably at some unearthly hour in the morning. My friends weren’t quite so lucky though!

The kitchen is housed in this wooden structure on stilts, separate from the house. That actually makes sense. 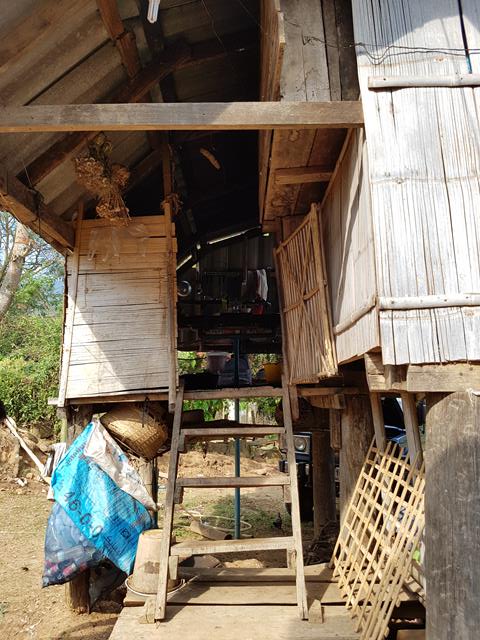 We had a delicious dinner cooked by Sam. It was quite a feast! The dishes were similar to a typical home-cooked meal back home, so that was extra nice. 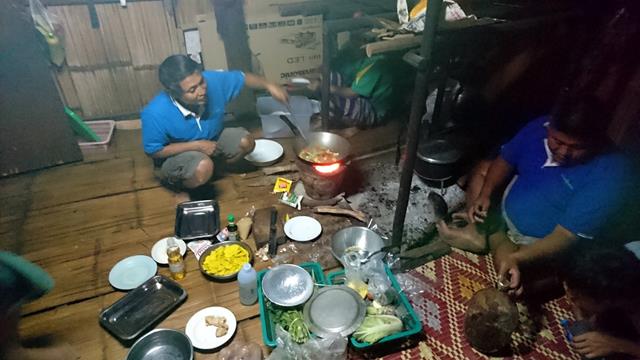 From left to right, below: pumpkin & egg, mixed vegetables, (spicy) chicken soup and potatoes with yellow curry. There was also watermelon (for dessert) and boiled tadpoles (a local delicacy, which I didn’t try). 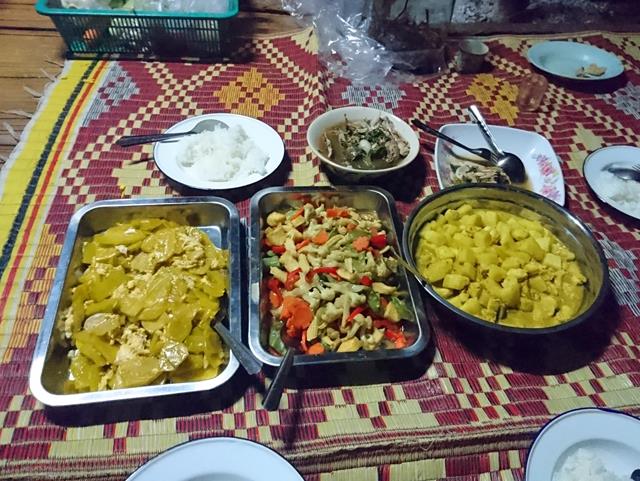 The toilet was an outhouse with running water (unheated), a squatting toilet bowl without flush (you wash it down the old-fashioned way) and no sink. That made for a pretty interesting experience. We rushed to take a shower before the sun went down. At night, a flashlight is invaluable if you need to go.

As for the actual stargazing (the main motivation for staying here), we took a post-dinner walk but couldn’t see many. However, Terence made an outhouse run in the middle of the night and apparently saw lots of stars then. Darn!

The next morning, we had a simple yet satisfying breakfast – prepared by Sam, again – and had a quick tour of the village before setting out on our final trek to the main road. 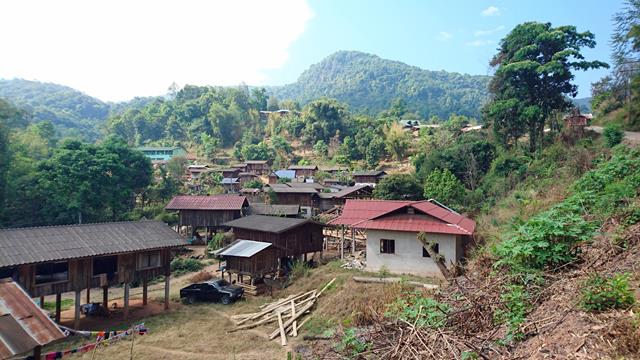 We got to visit the primary school / kindergarten (it was the school holidays, so only the kindergarten was in session).

We also got to try freshly brewed coffee. It was strong. The entire process, from growing the arabica beans to drying, roasting and grinding them, takes place right here in the village!

You can buy the coffee beans or powder at THB150 (SGD6) for 250g. I think it’s a great way to support community-based sustainable agriculture.

Back on the road

I use the term “road” very loosely here. This trek was relatively easy and we were kindly given bamboo poles to use as walking sticks. 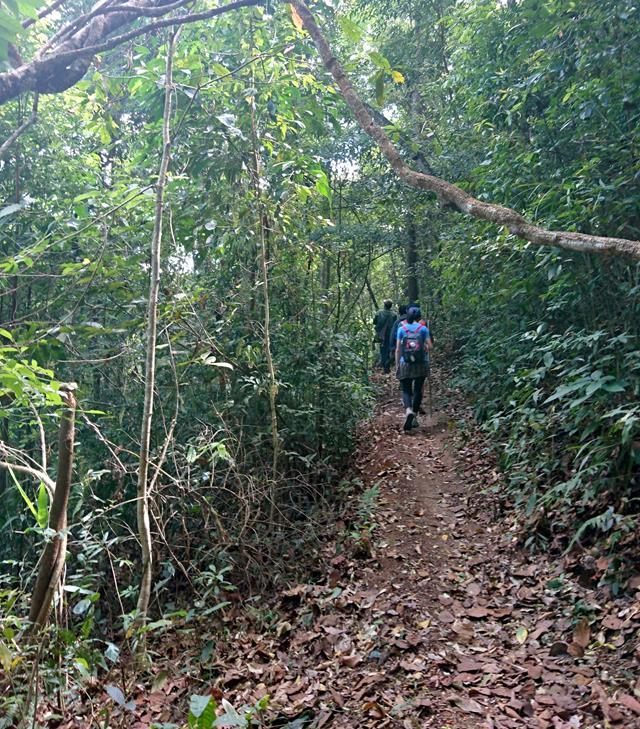 The most tricky part was the fallen leaves making the trail slippery. Not a good thing when you have a steep incline! Good hiking shoes are probably not strictly necessary (Terence did the entire thing in canvas shoes!) but they are very good to have. 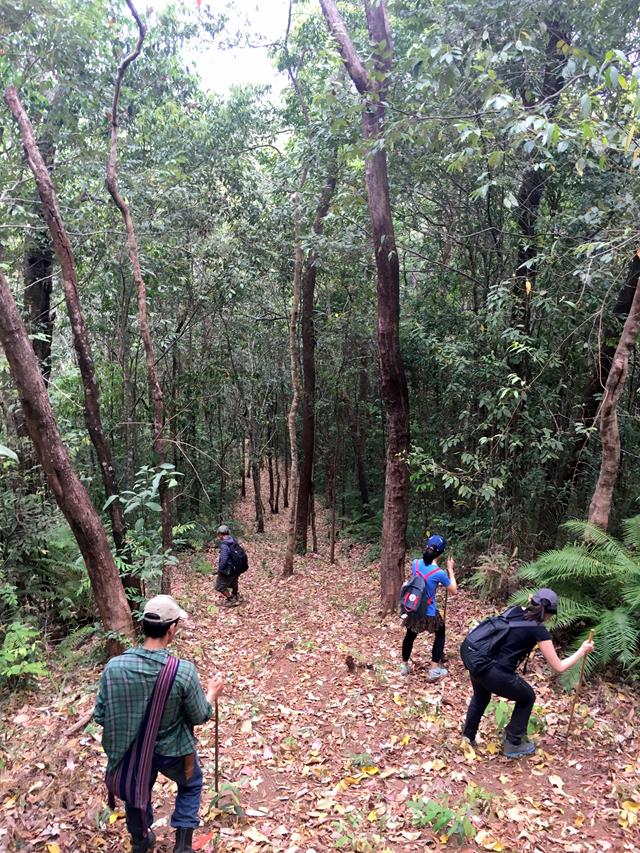 Along the way we saw: a water vine (you can drink from it), deer footprints, pine cones, and this Tiger Balm tree. 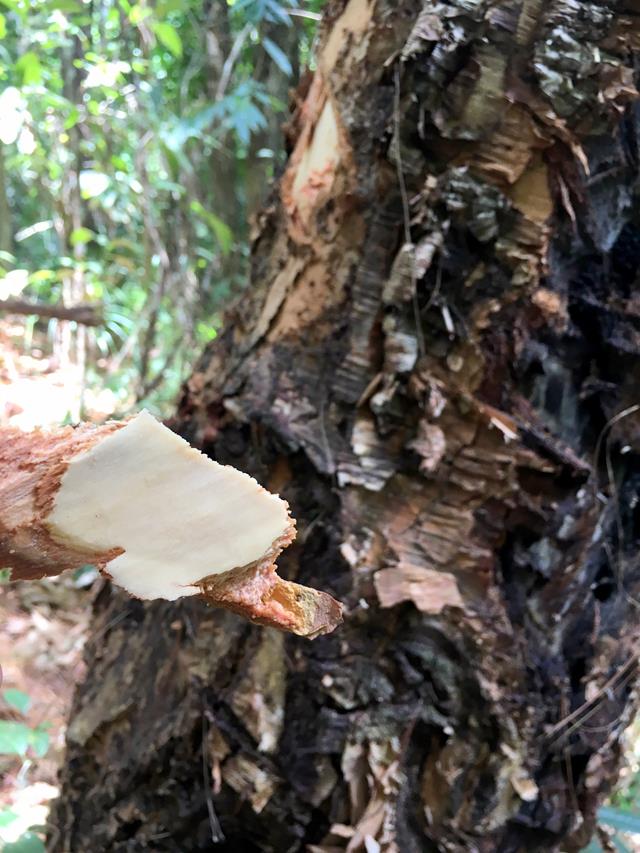 We stopped for a lunch by a small waterfall. 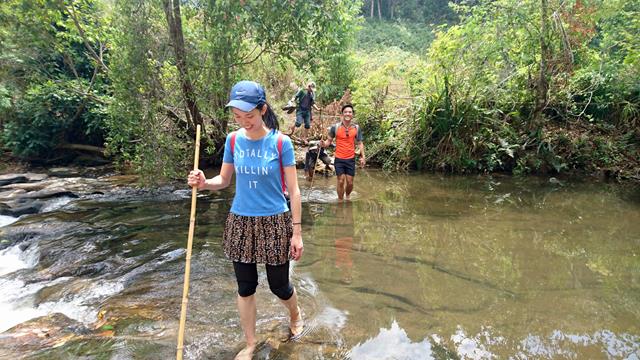 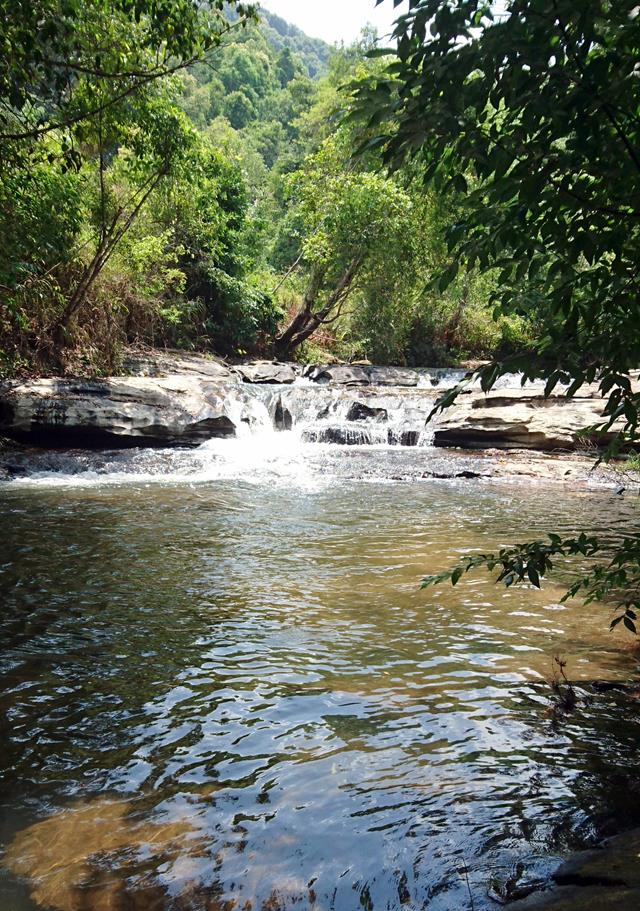 I was incredibly impressed by how our lunches were packed: wrapped up in banana leaves, with the banana leaf stems functioning as chopsticks. This is how you reduce the use of plastics! 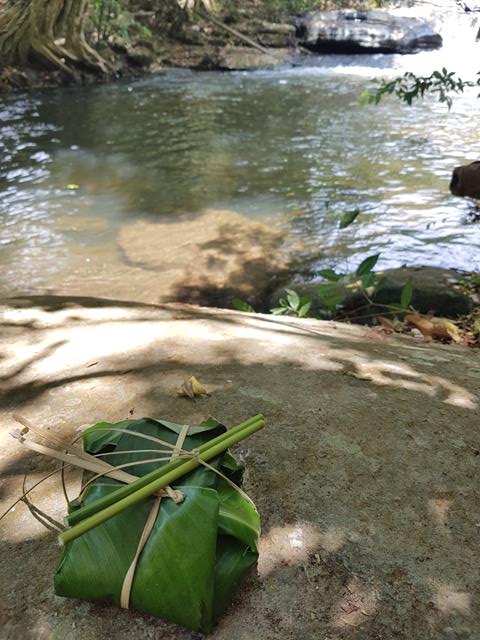 We had stir-fried noodles, rice crackers and watermelon. 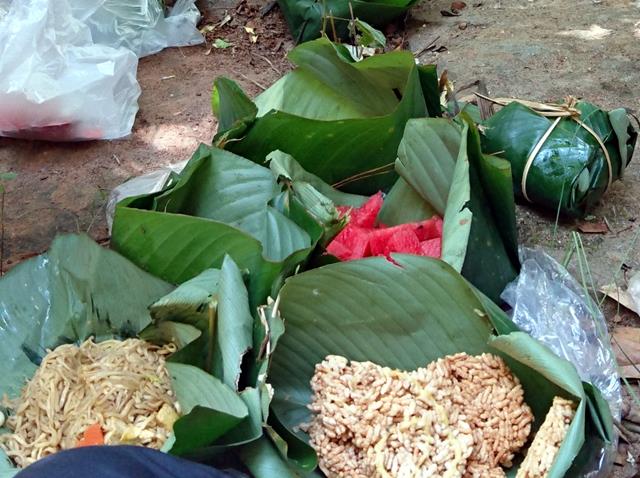 We rested here for a bit – you can take a dip in the water or a nap on the rocks, if you’re so inclined, or just enjoy the tranquility of the surroundings. I regretted not bringing a swimsuit!

From there, it was a short 20-30min trek to the main road, where our driver, Hoss, was waiting to bring us to our final waterfall (of the day). 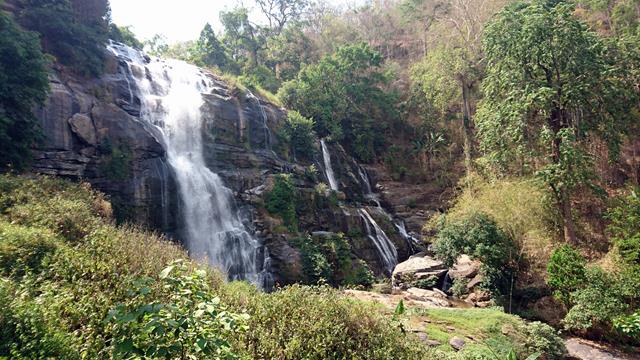 This was the first time in 2 days that we saw other tourists! We’d seen a lot of waterfalls by then, so we didn’t linger long.

Then it was a 2-hour drive back to the city of Chiang Mai, where they dropped us off at our hotel.

Cost of the 2-day Doi Inthanon trek: USD170 per person (for a private group of 3). The trip is customisable, so you can do longer treks if you want!

Have you done something like this before? If not, would you be up for it?

Thanks Ahila! It was really very interesting =)

Boiled tadpoles – hmmm. i don’t think I would have tried them either.

Yeah, we all draw our own lines somewhere!

[…] of outdoor adventures to be had in Chiang Mai. We went on a 2-day trek in Doi Inthanon (including a village homestay), and we also considered white water rafting and rock climbing, but eventually settled on […]

[…] smaller weaving machine, which bears an uncanny resemblance to the ones I saw in Chiang Mai earlier this year. Don’t they look […]