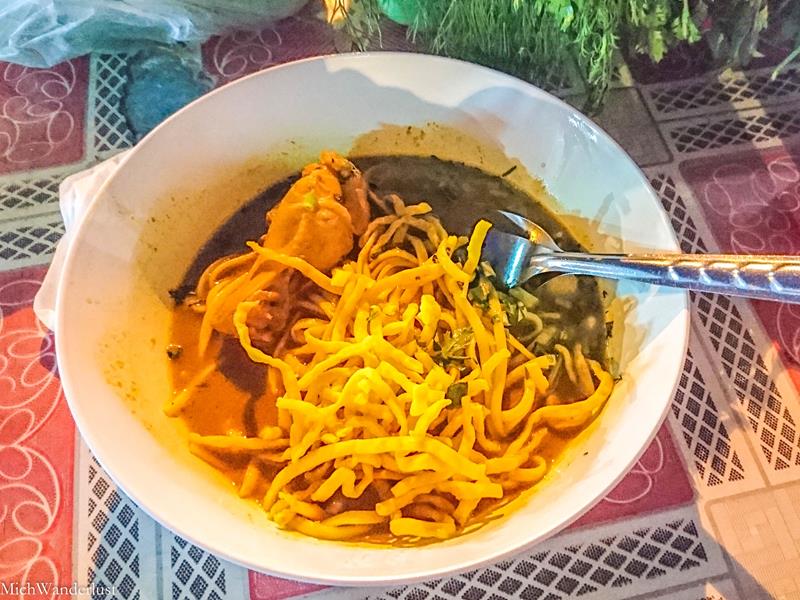 Chiang Mai, the largest city in the north of Thailand, is known as the “Rose of the North”. Although most famous for its temples, there’s still plenty to do with 2 days in Chiang Mai without going on a temple binge.

Chiang Mai was founded more than 700 years ago. You can still see the old city wall and the surrounding moat, although the modern city has expanded well beyond those boundaries. 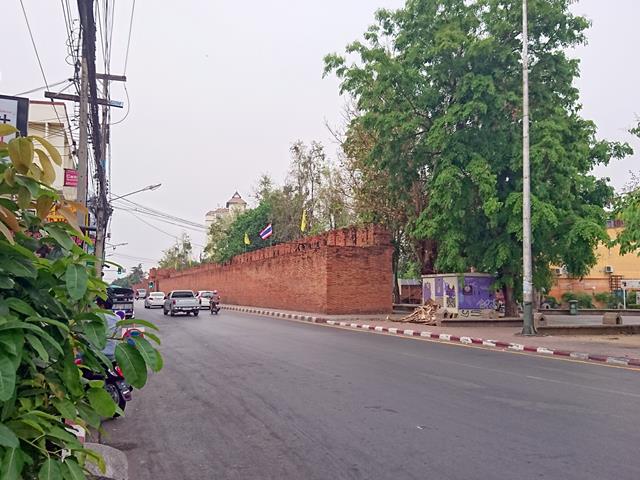 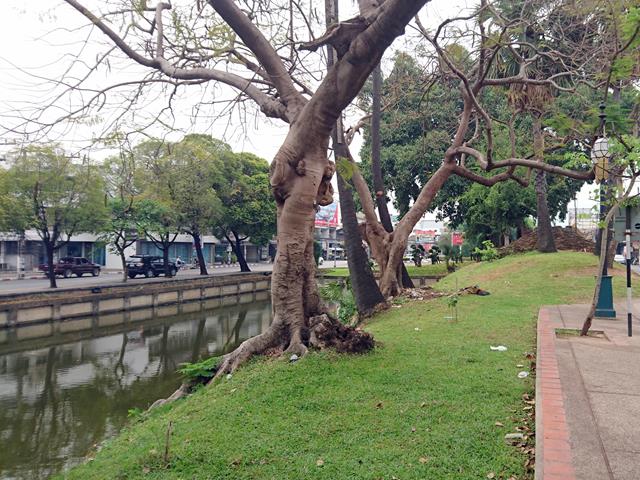 Today, it’s a great favourite among backpackers and – to my surprise – tourists from mainland China in particular. We heard that this is due to a very popular Chinese TV show which was filmed there!

Getting from the airport to our hotel was ridiculously easy – there’s a taxi counter as you exit the airport, and all you have to do is tell them your hotel name and they’ll arrange for a taxi.

The city is quite walkable, if you can bear the heat and humidity.

We mostly got around on songthaews (below, left), which serve as a cross between a bus and a taxi (but more fun than either!). They’re plentiful and cheap, although at times it just made more sense to walk. Note that many songthaew drivers don’t seem to speak much English, so Google Maps came in very handy! 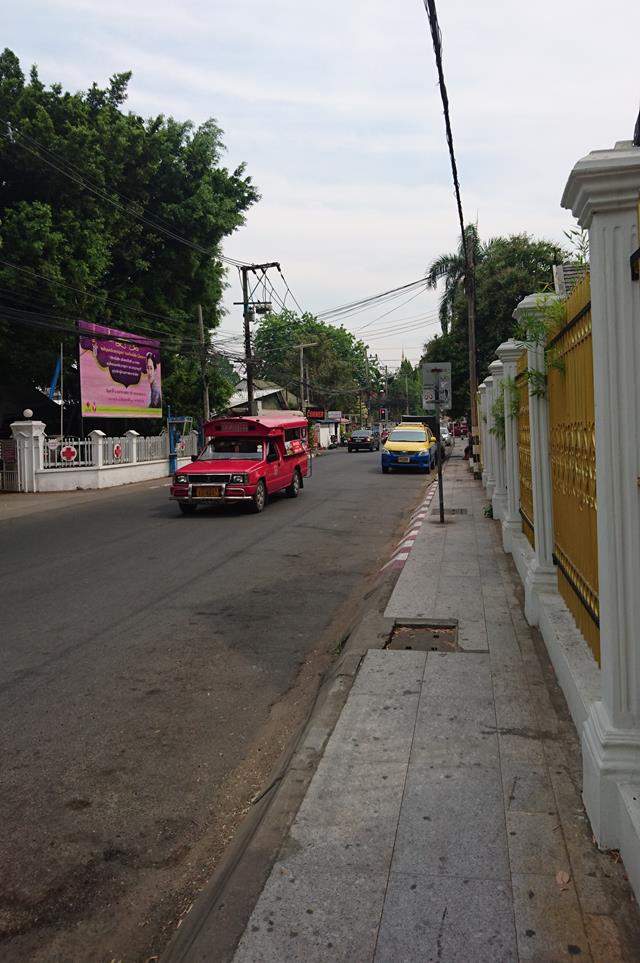 Of course, if songthaews aren’t your cup of tea, there are also conventional taxis.

From the airport, we made a beeline for Rich Lanna House – our choice of digs on the first night. Because PRIORITIES.

This is a charming boutique hotel conveniently located inside the old city. I really appreciated the complimentary coconut juice when we checked in.

Just the thing we needed after a series of early morning flights, including wandering around Suvarnabhumi Airport in Bangkok completely lost! 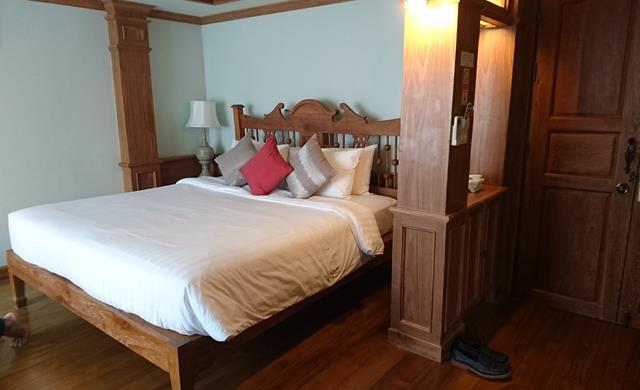 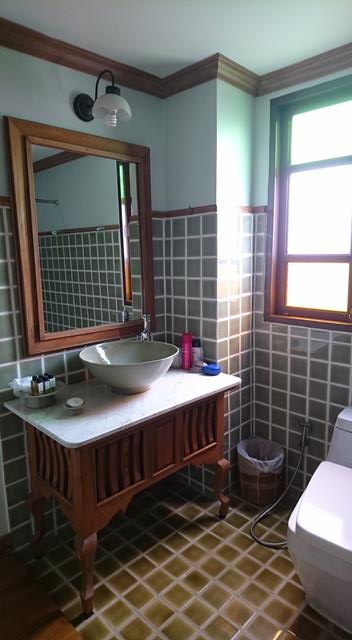 This was also incredible value. A night’s stay cost us under SGD50 (USD37) each (including a small surcharge to add an extra bed)!

With our luggage sorted, we headed out in search of nourishment. Hotel staff recommended Jok Sompet restaurant, which was right around the corner.

I really enjoyed the relaxed atmosphere and cute decor here! The staff don’t speak much English but the menu is in English, so pointing should do the trick if your Thai (like mine) is not quite up to scratch. 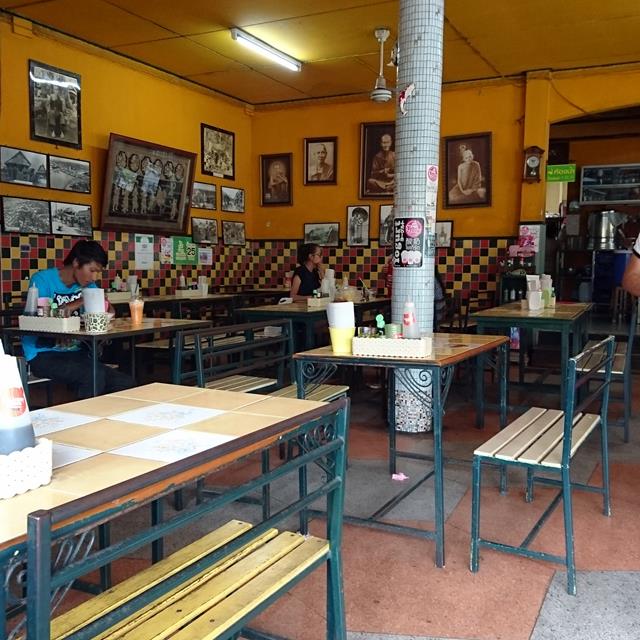 Isn’t this the cheekiest monkey ever?! 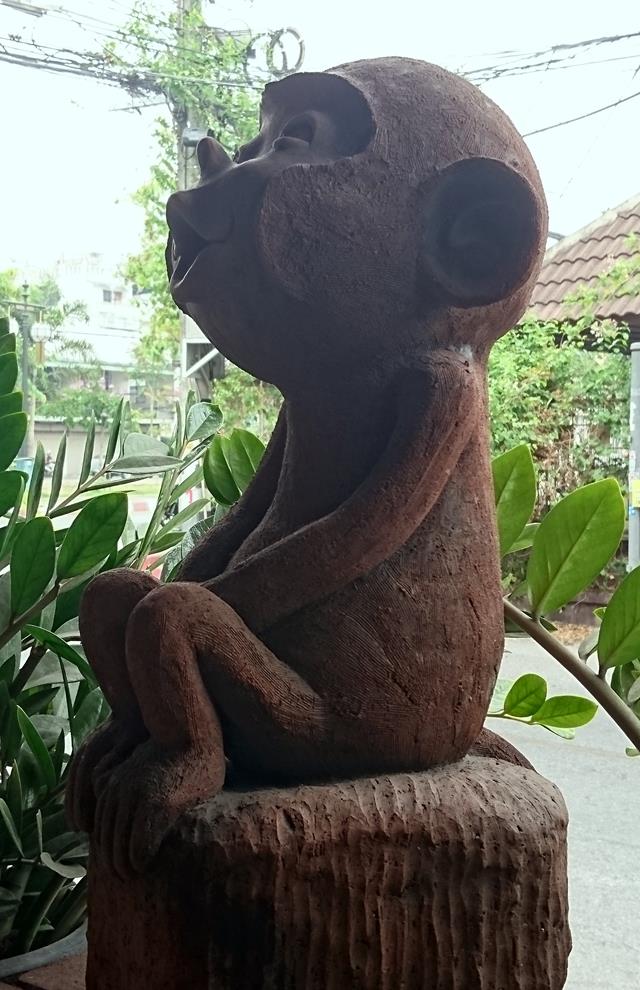 I had Pad See-ew (essentially Thai-style fried kuay teow or flat rice noodles). I love this simple dish and eat it every chance I get! 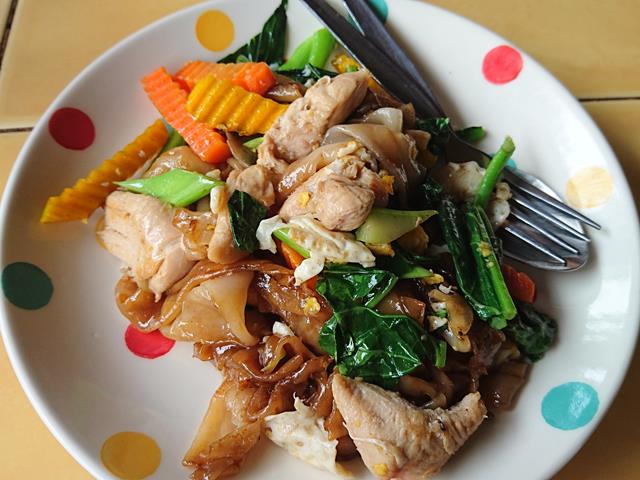 Our meal only cost THB130 (SGD5), including Thai iced tea, in total. Just one of the many reasons I love this country.

Within the Old City

There are more than 30 temples! We didn’t spend too long in any, though – just popped into 1 or 2 to take a few quick photos. 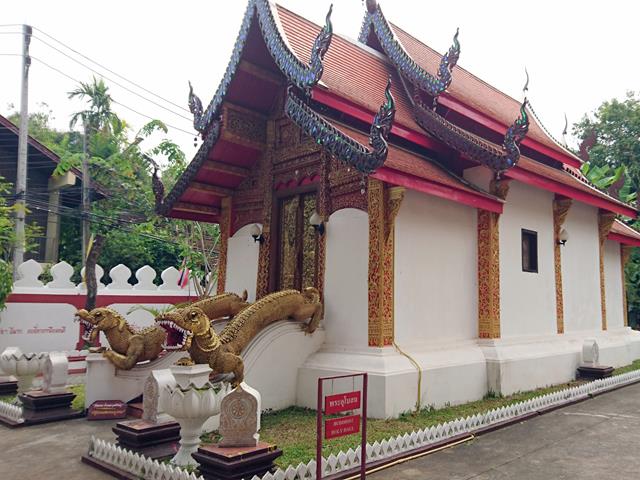 Outside the Old City

After a pit stop at Rich Lanna House, we headed further afield to Nimmanhaemin Road, home to many hipster cafes and shops.

One such cafe, Rustic and Blue, was highly enjoyable – not least because it was air-conditioned! Check out the delectable blends: 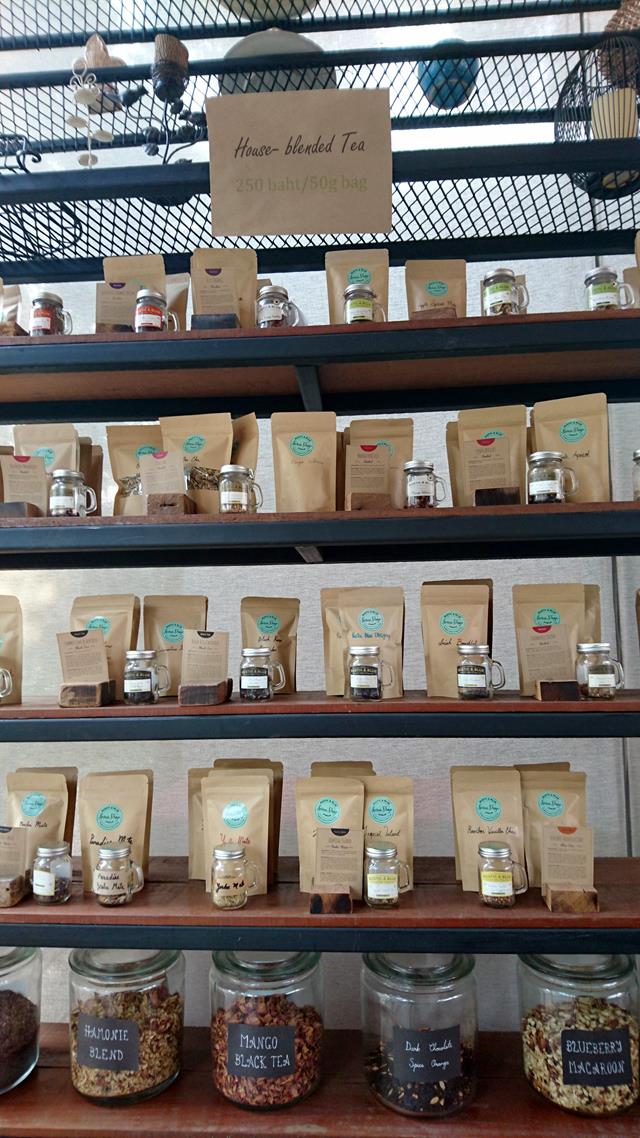 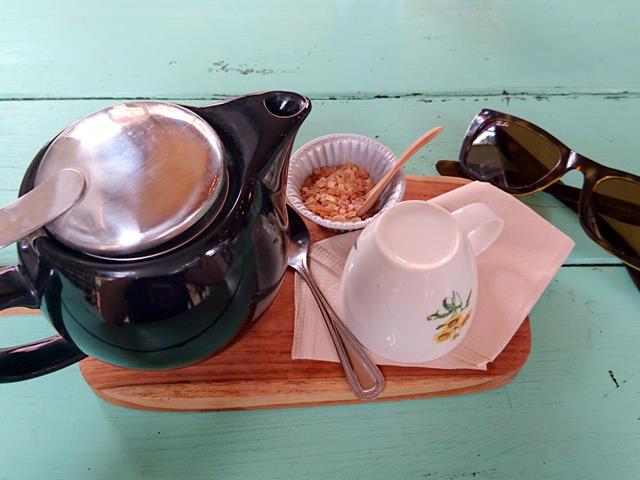 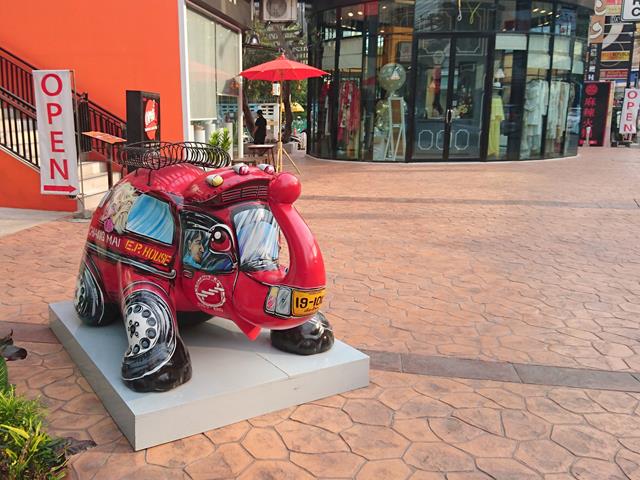 If you haven’t seen traditional Thai desserts before, promise me you’ll check them out the next time you visit. They are so pretty, I can never bear to eat them!

Check out the luk chup on the far left below, shaped like mini fruits and vegetables, and the rose-shaped sweets on the right. 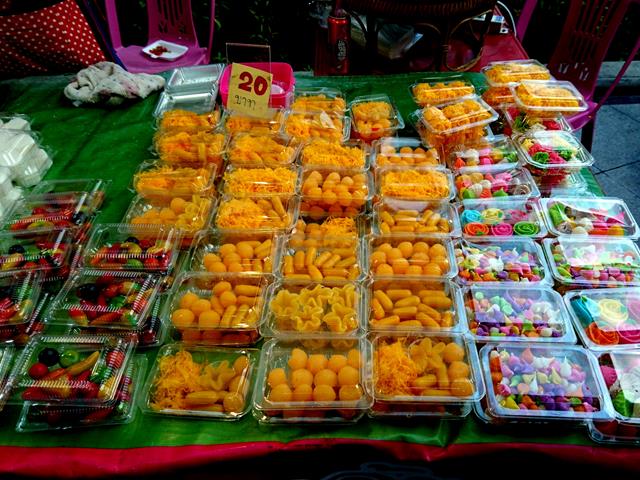 The highlight of dinner (at the Maya food court) was these peeled coconuts at varying stages of deflation. 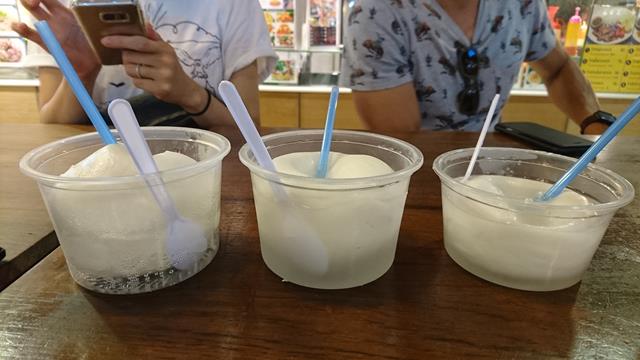 Conclusion: peeling coconuts is just too much work. They’re also tricky to eat with just a plastic spoon and straw! Be prepared for a lot of chasing your coconut around the bowl.

Coconut ice cream is much easier to eat, and simply perfect on a hot day. Am I right? 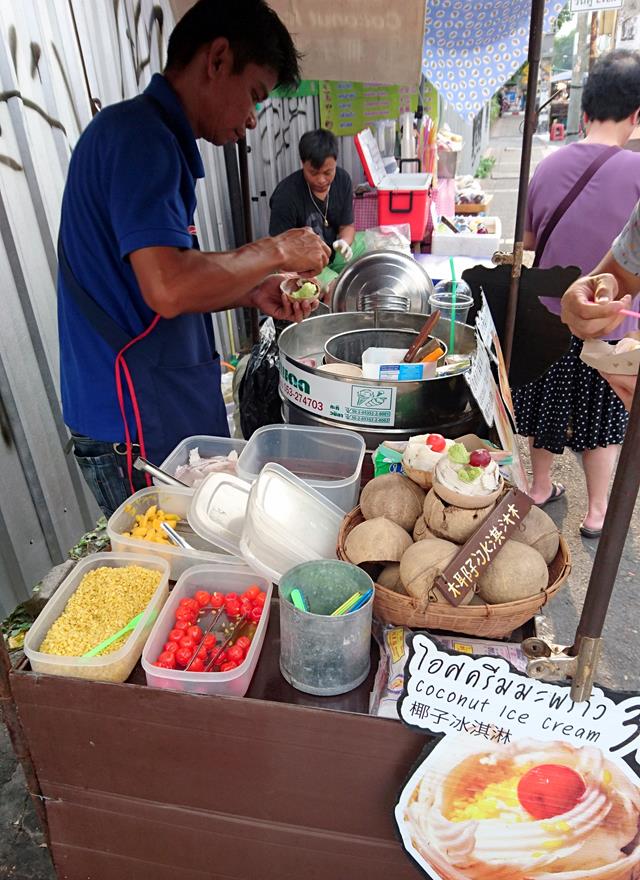 After our 2-day trek in Doi Inthanon, we stayed in this lovely hotel just outside the Old City. You can imagine how thrilled we were after 2 days in the jungle. 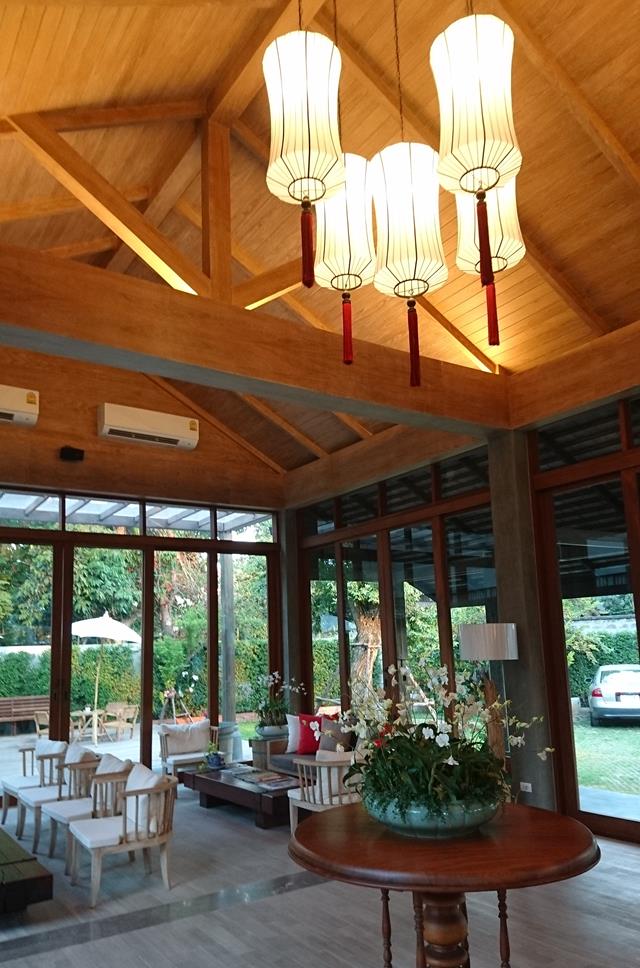 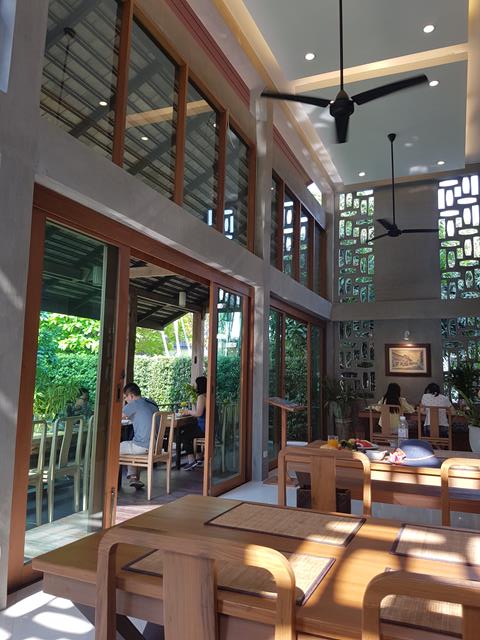 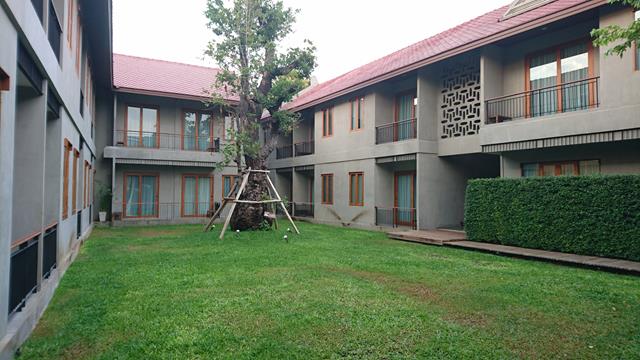 CHU Hotel was also incredible value. We got a Family Suite room for under SGD50 a night per person!

The breakfast was especially good. They offer 3 sets of cooked food in addition to the usual continental breakfast spread, which is laid out buffet style. For example, Set A is the “American breakfast” – toast, sausage, etc., while Set B has ham and cheese sandwiches.

One of the famous food markets in Chiang Mai – we had khao soi (one of the regional specialties) here. They served just the egg noodles with gravy and a chicken drumstick, and we could add as much toppings we liked.

Check out all the toppings available! 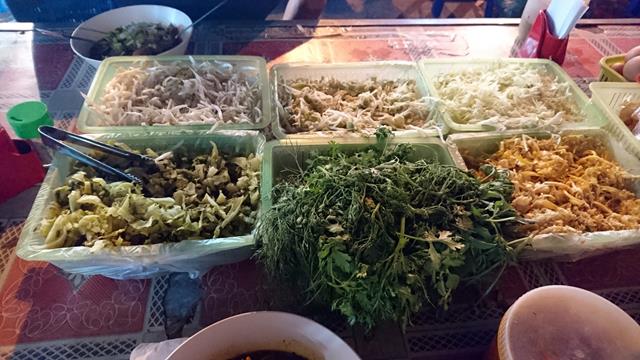 We arrived at 6.30pm, and most stalls were only just getting set up. Maybe come a bit later, if you want to enjoy the full range of street stalls! 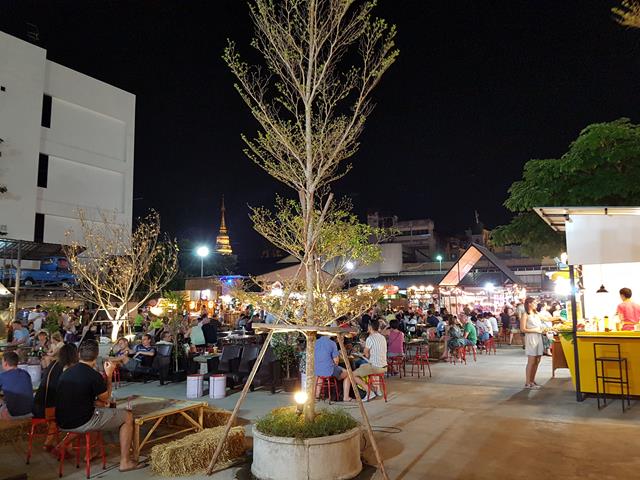 Ostensibly a “market”, this is decidedly on the upmarket side. It’s a good place to eat, have a few drinks, and chill out.

There’s a wide variety of food and drinks – we had mango sticky rice (my all-time favourite Thai dessert!), crepes and Thai iced tea. There was even a live band performance!

Not too far away is Lemongrass Thai Restaurant. It’s perpetually crowded and we had to wait to get in, but the food is good!

I particularly liked the phanaeng curry and pineapple rice. We had tom yum soup and eggplant too, and it came up to only THB250 (SGD10 / USD7.50) per person, including a drink each!

We explored the Night Bazaar for a bit but, like most Singaporeans, ended up going for a massage.

We might have gone a bit overboard though, with not one, but two in a row! We had just come back from a 2-day trek, after all…

First, we had a 30-min back and shoulder massage at Let’s Relax for THB300 (SGD12 / USD9). It’s relatively expensive, but I’d been to a Bangkok branch so it felt like a safe choice.

The second was a completely impulsive decision.

After we left Let’s Relax, we were strolling down the street when Chai Massage 2 caught our eye. Having nothing better to do, we decided to go for it!

My friends had a foot massage while I went for a full body Thai massage – 1 hour for THB200 (SGD8 / USD6). Because at these prices, everybody needs a massage.

I actually preferred Chai Massage – the masseuse was stronger and seemed more experienced. Plus it was significantly cheaper.

On our last day, Terence and I had one final massage at Peak Spa (Sarah had left on an earlier flight).

We took advantage of the Peak Paradise Package Buy One Get One Free promotion – THB3000 (SGD120 / USD90) for two persons. This comprises herbal steam, hot oil massage and facial massage in 2.5 hours.

You can choose the type of oil for your massage. I chose “Refreshing”, which smelled a little like Vicks. 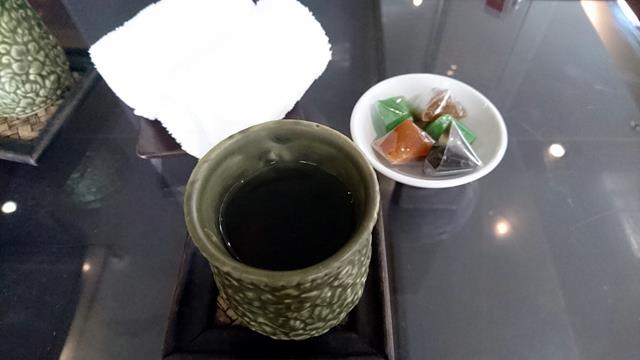 The package also includes pick-up from our hotel and transport to the airport thereafter. Talk about ending on a high note!

Have you been to Chiang Mai? What’s your favourite thing to do there? 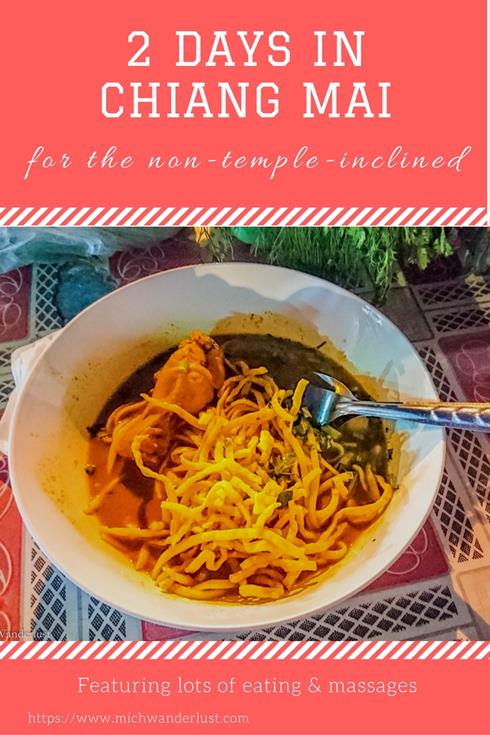 Maureen & I loved Cheng Mai, so peaceful after Bangkok. We used Cheng Mai as a jumping off place to get to Luang Prabang in Laos.

Sounds like you had a great trip! I’ve only been to Luang Prabang once, more than 10 years ago but I remember it was amazing 😄

I have not been to Chiang Mai (or Thailand for that matter!), but the little hotel sounds lovely. Laurence spent a few months in Thailand and really loved it, so look forward to visiting here some day! I think I am one of only a few travel bloggers who hasn’t been 🙂 ~ Jessica

It depends where you are, I guess – I live in Singapore, so Thailand is really convenient for me 🙂 Hope you get to visit one day – I’m sure you’ll love it!

My only contact with Thailand is through their delicious food. I had never been there, but reading your post makes me very curious about this country. I’m sure there is so much more about it than just the good food.

So true, Anda! It’s possibly my favorite country in the world (apart from my own) – apart from the food, the cost of living is really low and the people are really nice! It’s quite a long trip from the US, but if you ever visit I’m sure you’ll enjoy it =)

D of Love C and D

We have just arrived in Chiang Mai, so we will have to check out some of your recommendations. Thanks!

Hope it comes in useful!