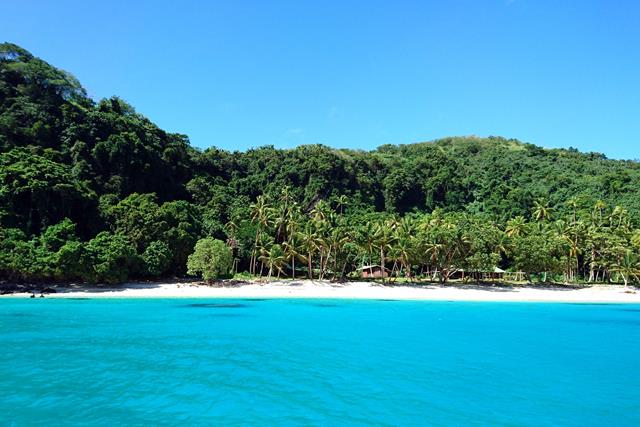 When I told a friend that I was visiting Fiji, she responded, “You sure visit a lot of exotic places!” Given that what we consider “exotic” is largely determined by where we live (Bali, for example, is a long weekend trip for us in Singapore), that’s certainly been the case recently (e.g. Mongolia, Naples, and the Canary Islands.)

In truth, however, I was going to Fiji because my boyfriend Ian had been volunteering at a shark conservation project with Projects Abroad, doing marine conservation work and getting his divemaster qualification in the process. This made the trip extra special as we spent a lot of time hanging out with the Projects Abroad people – a great mix of international volunteers. It was great fun! 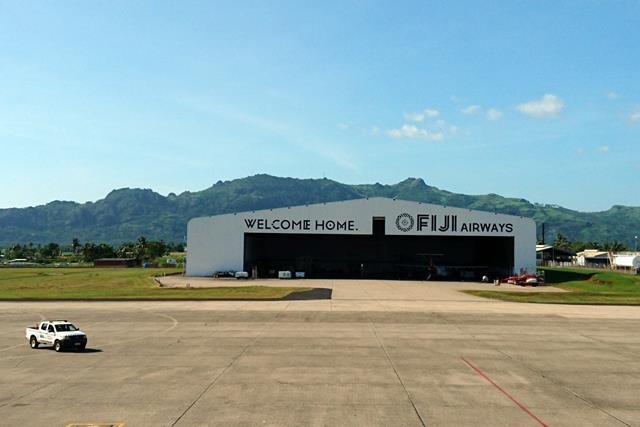 The bus ride from the airport to Pacific Harbour (where I was headed) takes about 3 hours. I’d normally spend it dozing, but on this occasion I struck up a conversation with the Fijian guy sitting next to me, who happened to be heading there too! Joe had travelled all over with the British Army and I learnt many fascinating things about Fiji from him. 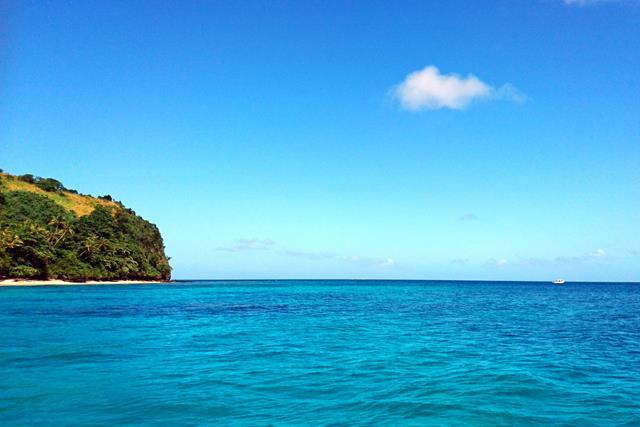 This really drove home for me the need for us all to do our part to reduce greenhouse gas emissions. Check out some totally doable suggestions from Alex in Wanderland here.

For the first few days, we stayed here in the “adventure capital of Fiji”, at Uprising Beach Resort.

We booked a traditional thatched bure (which can house up to 4 people), but other accommodation options are the villas (more expensive) and the dorms (cheaper). 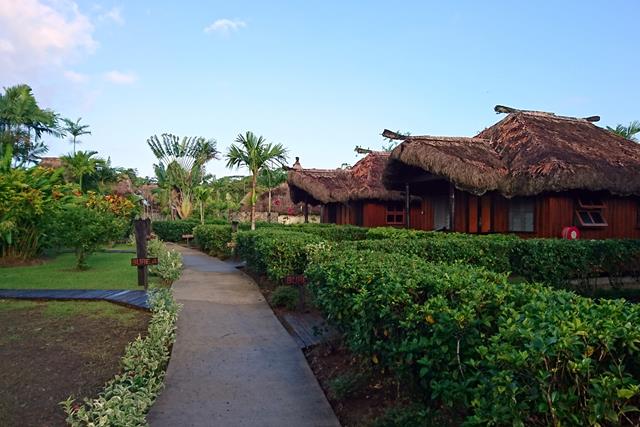 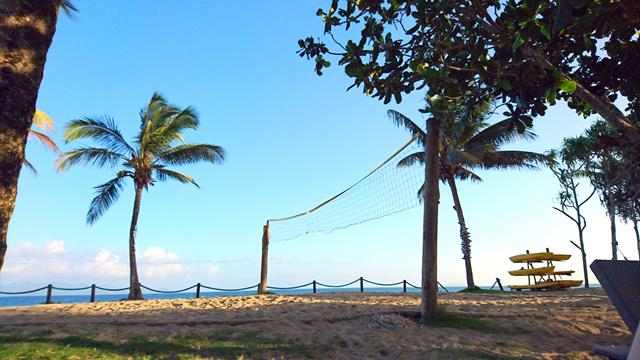 My biggest complaints? Wi-fi isn’t free, except for a few hours in the afternoon. (I’d recommend getting a local SIM card at the airport!) In addition, our shower was faulty and we had no hot water. They weren’t able to get the necessary spare part(s) in time so we had to make do with cold water. Overall though, I loved it here and would definitely stay here again. 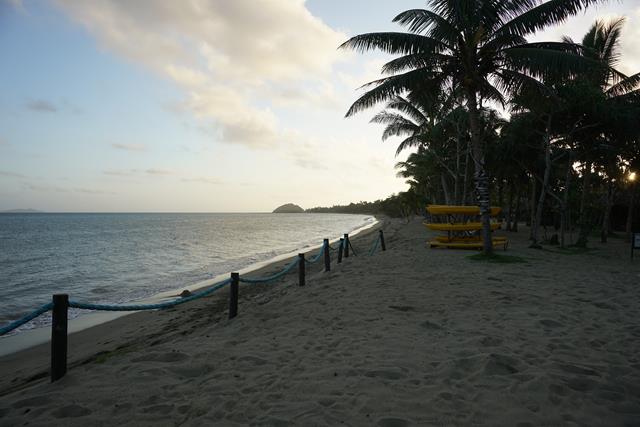 A Garden Bure costs FJD285 (SGD185) per night for 2 persons. Beachfront Bures are slightly more expensive. We got a slight discount, though, due to Ian’s association with Projects Abroad.

Around Pacific Harbour, this is the closest thing you’ll have to a shopping complex. There are restaurants, cafes, banks/ATMs and various shops (I got reef-safe sunscreen and lip balm from the dive shop here!). You can also book tours here. The fire-walking tour looked interesting, but the timings didn’t work for us. 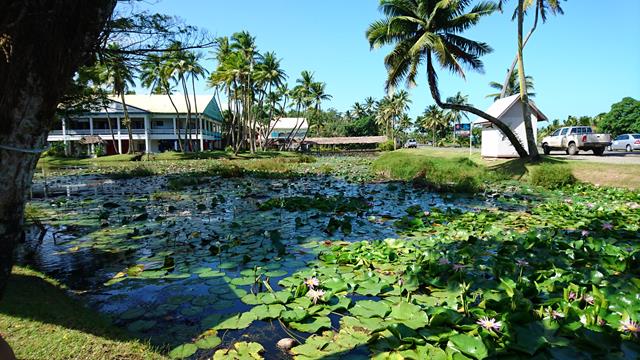 Many friends asked what Fijian food was like. Unfortunately, I can’t really answer because we kept eating generic Western food.

At the Arts Village, we had burgers at Oasis Restaurant, which were decent (about FJD40 / SGD26 in total). I appreciated the vegetarian option! Shaken by the climate change discussion I had with Joe, I was (and still am) trying to cut down on meat consumption.

There is also Skinny Bean Cafe (free wi-fi!), with fluffy pizzas (FJD 15 – 18) which Ian loved. I tried the Hawaiian and thought the ham had a very strong smell. 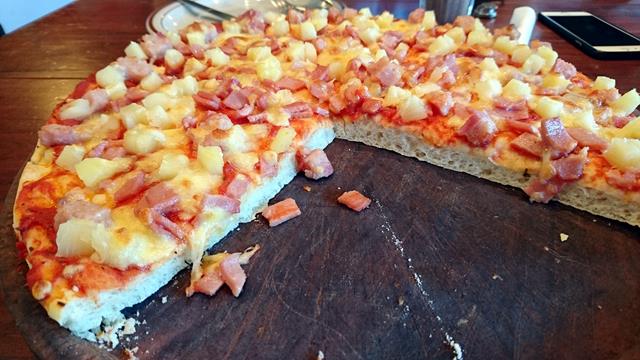 Loved their decor, though! 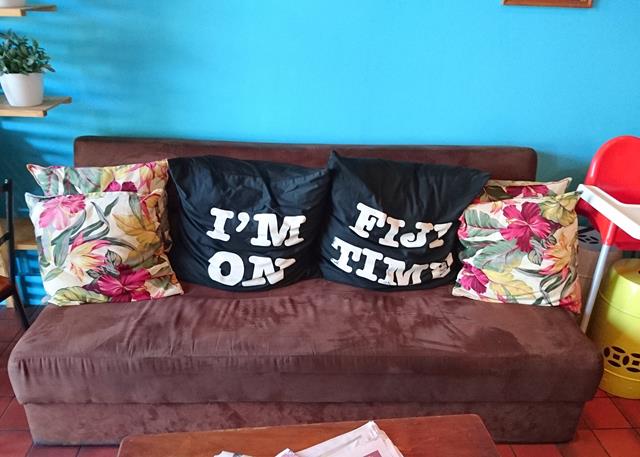 At the entrance to Uprising, there is Beach Bum Burgers: a burger / fish and chips restaurant. A great option if you’re staying there and feeling lazy! Note that the food takes a while to come, though – all in good (Fiji) time! 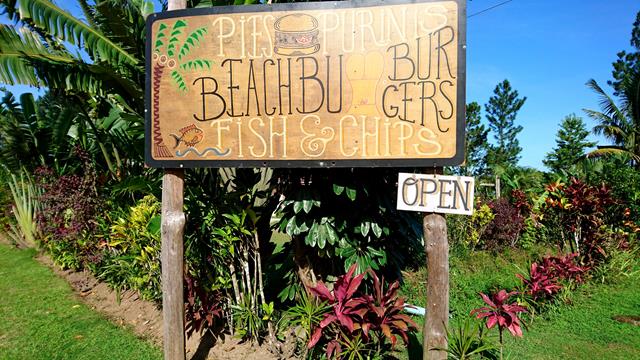 I had the fish & chips but found the fish a bit too dry. I preferred Ian’s burger – the Bad Boy with Cheese. 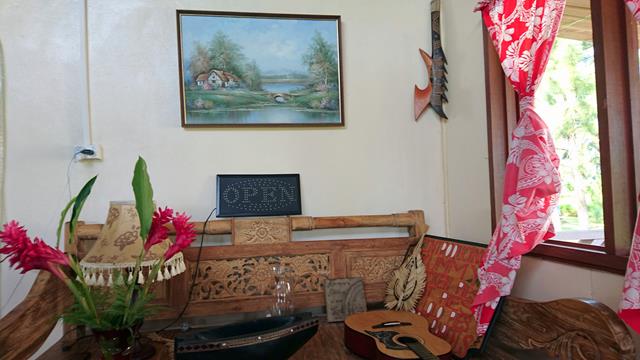 We visited a few times – to introduce me to the staff and other volunteers, return borrowed stuff etc., and I got to see a bit of what they do. I happened to be there during the weekly swim club where they teach local kids how to swim. Always good to know, especially when you live on an island!

I also visited the mini-mangrove nursery – mangroves are vital to shark conservation as they act as nurseries to several shark species. Unfortunately, more than half of the planet’s mangroves has been lost in the last 50 years due to farming and other human activities. 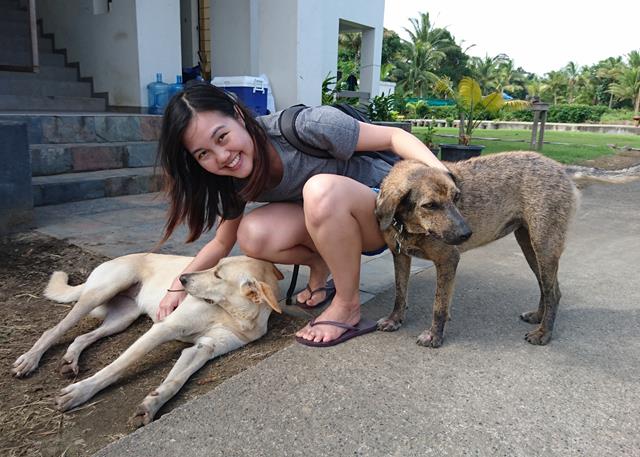 Next up: diving with sharks and other creatures, and our time in the town of Nadi.

Have you been to Fiji? What was your favourite place? What are your tips for sustainable living and travelling?

I would love to discover Fiji! I’m starting to want to visit more exotic places as I havent visited any since I was 18! I’ve only mostly seen Europe since then! #TheWeeklyPostcard

It’s a pain to get to from Europe, that’s for sure. Maybe the next time you go back to the US you can take a detour to Fiji =D

Such a beautiful place and way to learn more about it. Who would think about the rugby obsession? I think Fiji is an 8 hours flight from Los Angeles and you do not have to cross the International Date Line. I should plan a trip there!

Yeah, an 8-hour flight sounds manageable! There were lots of tourists from Australia and NZ (naturally) but a handful of Americans too. You’d have to cross the International Date Line, but I reckon it must be really fun to tell people you came from tomorrow haha =) thanks for stopping by and commenting, Ruth!

I will have to stop in Fiji next time I am in Singapore visiting my in-laws. Your photos make it look like the most beautiful place!

It really is the epitome of a beach paradise! It’s kinda in between Singapore and the US so you could take a short detour there en route to Singapore. Also, really fascinating to hear your in-laws are here! Hope you like our little red dot =) Did you marry a Singaporean?

I always said that “exotic” is a matter of perspective: it depends from where you are looking at it. Fiji Islands are really beautiful, but I’ve only spent 8 hours there, in transit. I’d love to go back and visit them in detail. Great pictures!

Couldn’t agree with you more, Anda – exoticness is an entirely relative concept. Hope you get to visit Fiji properly sometime – it’s well worth it and I think you’d enjoy it =)

I’d love to go! I didn’t know about their love of Rugby- I’ll watch for them in the Olympics:)

Yeah! Are you watching the Olympics? I’m currently in Sabah, Malaysia with barely any internet access and none of the (few) Tv channels here are showing the olympics so I feel like im missing out on a lot!

[…] dives are controversial but ultimately, I personally think they do more good than harm. During my recent trip to Fiji, we did shark dives with 3 dive centres, and each experience was very […]

[…] hadn’t planned to spend much time there at all, but ended up spending about 3 days there as Uprising Resort (where we were staying in Pacific Harbour) was fully booked for those days. Instead of finding other accommodation in Pacific Harbour, we […]

Currently living in Nadi! I witnessed the celebrations from the Rugby Sevens – it was crazy! Wrote about it on my blog. The Beqa Shark dive was outstanding. That was out-of-this-world. I love Natadola Beach for snorkelling, and the Coral Coast is beautiful. I also love driving from Nadi to Suva through all the villages and seeing how welcoming everyone is. It’s very humbling when you see the living conditions for locals. Fiji is a special place and I can’t wait to continue exploring it!

Wow, it seemed like every single person I met was a rugby fan, so I can only imagine what the celebrations were like in Nadi! Glad you enjoyed the Beqa Shark dive too 🙂 I haven’t been to Natadola Beach or checked out much of the Coral Coast properly – will have to do so if I ever go back. The friendliness of the locals is definitely one of the things that struck me most. Hope you have loads of fun exploring Fiji, it sounds like it will be a great adventure for you 🙂 Thanks for commenting, Juliette!