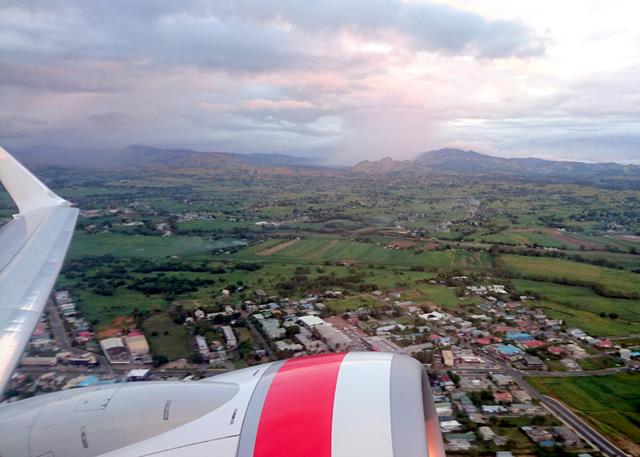 After spending a week in Fiji, we were due to fly out on a Saturday and get home on Sunday. The day started out innocuously enough:

In the morning, we went ziplining with Zip Fiji – they have a few locations all over Fiji but this one in Nadi is the newest. It boasts 16 ziplines, although at the time of our visit one had been damaged in one of the recent cyclones and was not being used. 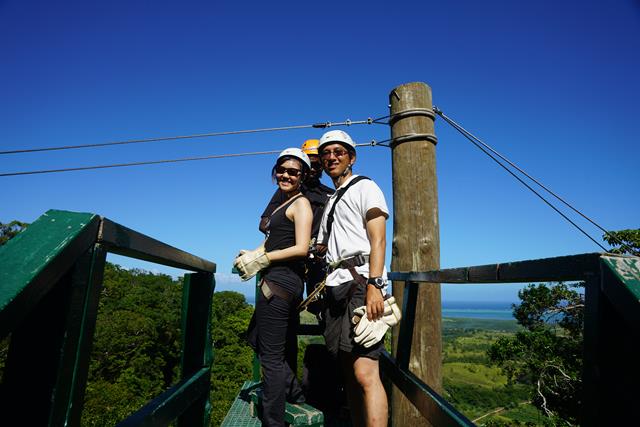 This was only a month or so after I went ziplining in Chiang Mai, and I found the experience quite different – here, they give you really thick gloves so that you can brake (by applying pressure on the zipline) before you crash into the person waiting for you at the end of the zipline. It takes some skill and I’m sure those gloves wear out quite fast! I did appreciate having more control over my ride, although this also meant that I spent most of the ride thinking about braking instead of enjoying the scenery. 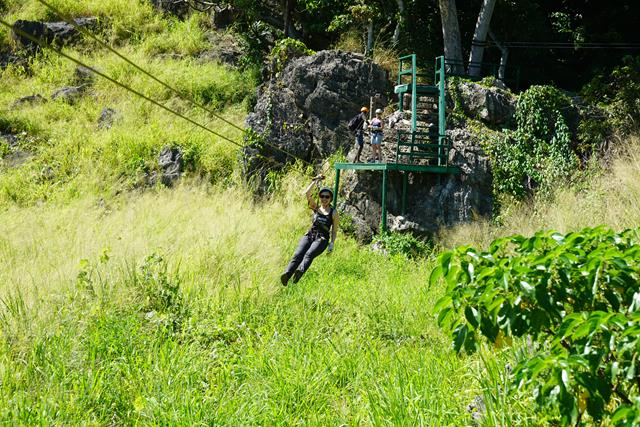 If you’re adventurous, you can turn upside down or try some other ziplining variation – I preferred to concentrate on braking properly, though.

Be warned – there’s also a lot of climbing up stairs! And as always, insect repellent is your friend. 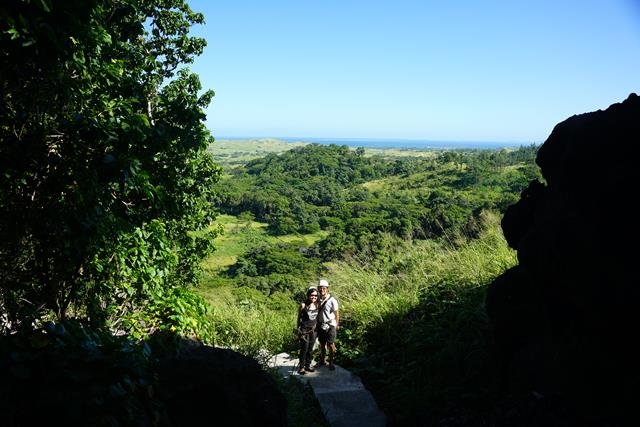 For an additional FJD10, we did an abseil / free-fall which was by far the most fun part of the experience. 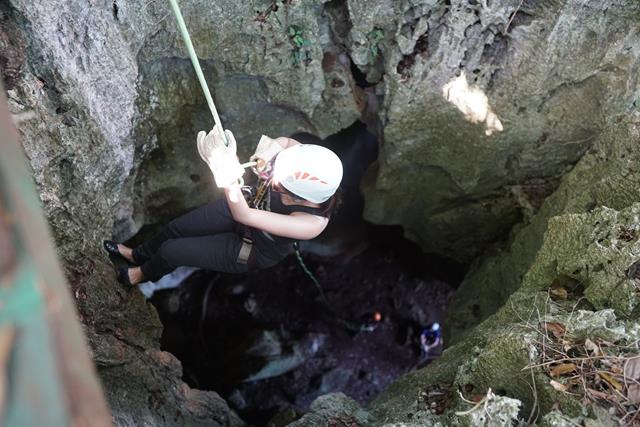 Obvious tip: do not attempt this in ballet flats! Mine were already very loose to start with, but I had no choice as the only footwear I had was ballet flats and flip-flops. Still very fun though. 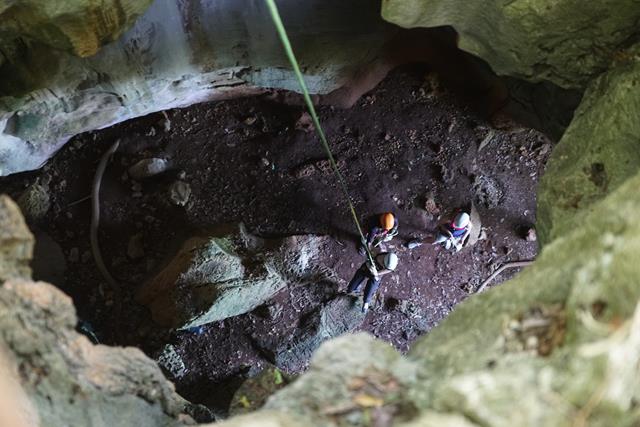 You abseil down a bit and then they drop you the rest of the way – it feels like free-falling, but they catch you towards the end and lower you slowly to the ground. Exhilarating! 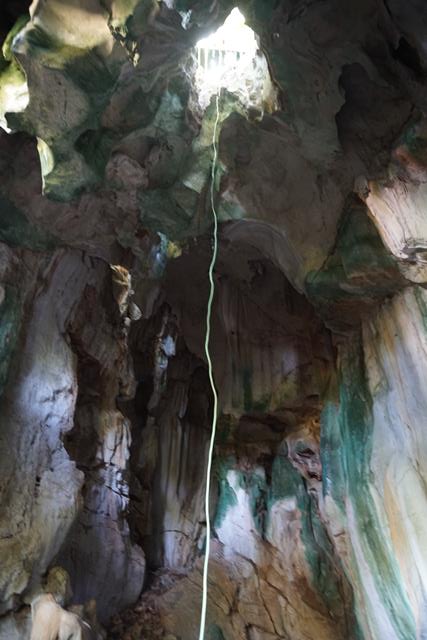 The first half felt quite relaxed – the staff were encouraging us to take our time and not rushing us, but after the abseiling everything suddenly sped up and felt quite rushed. Perhaps there was another group hot on our heels. 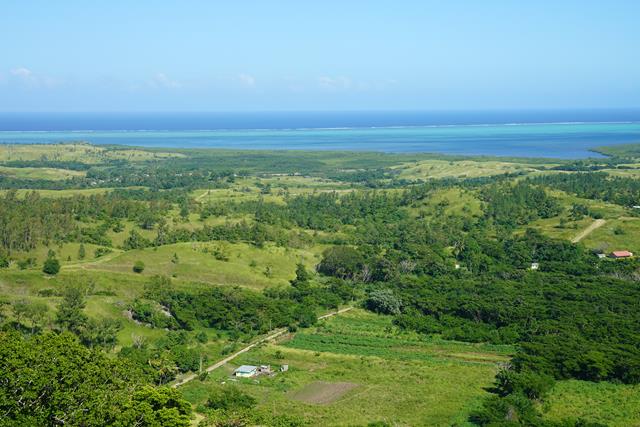 Cost: FJD245 (about SGD160) per person including lunch and transport (before the abseiling add-on).

After ziplining, we wandered around the town for a bit doing some souvenir shopping and ended up here. There were some interesting stuff, but a lot of the stalls were selling the same (probably mass-produced) things, which is a bit ironic for a handicrafts market. There are tons of jewellery and other trinkets here.

There was one lady actually making something out of traditional parchment in front of us, though. There weren’t many other people around, surprisingly (since it was a Saturday afternoon).

In fact, neither of us thought to check until we had arrived back at the resort and were preparing to kill our last few hours before heading to the airport.That was when we discovered that we had been completely wrong about the flight timing. Our flight had already departed!

What followed was hours on the phone with Singapore Airlines trying to get on the next flight out, racking up hundreds of dollars in roaming call charges in the process. The next flight out was on Sunday, so we had to stay one more night and arrive in Singapore one day later than planned. Thankfully, Monday was a public holiday in Singapore so I didn’t have to take additional leave!

Moral of the story? You can never check your flight timings too many times.

I was in absolutely no mood to spend another FJD175 for an extra night in Club Fiji, so we moved to Capricorn Hotel in town which only cost FJD104. No beach view and no bure – just a conventional hotel room with TV and air-con, but it was fine.

We spent our “bonus” day watching Captain America: Civil War at the cinema a couple of blocks from the hotel and eating (you guessed it) Chicken Express one last time. The movie was decent, so it wasn’t a complete waste of a day! 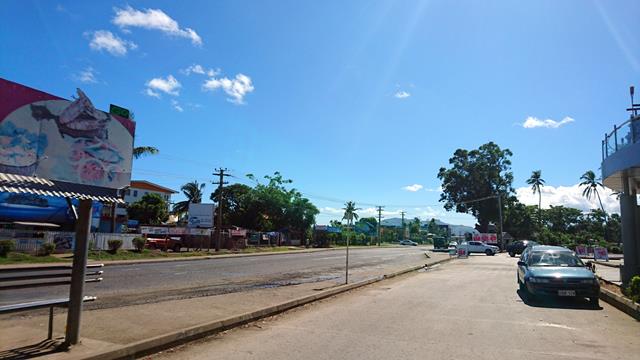 Not the ideal end to a holiday but a most valuable lesson learned!

Have you ever missed a flight? What happened?

This post is part of The Weekly Postcard hosted by Travel Notes & Beyond, A Hole in My Shoe, Toddlers on Tour, Two Traveling Texans and Arnie and Jo are on the Go – check out what’s going on elsewhere!

Haha! Sorry but this is so funny! I have a few friends who have missed their flights and I have always wondered how it’s possible. But as it comes out, it’s very likely if you don’t double or even tripple check! Haha
Thankfully this has never happened to me and I hope it doesnt happen again to you guys too! Great read and thanks for linking up with #TheWeeklyPostcard (:

Haha we have definitely learned our lesson! I’ve missed flights for even more silly reasons (e.g. underestimating the time needed to clear immigration and then feeling too awkward to make a fuss and ask to go to the head of the queue)… not something I’d ever wish on anyone else! Glad that it’s never happened to you and hope it stays that way! Thanks for stopping by, Kreete!

Oh no!!! Everybody’s nightmare about missing a flight. I’m a little over obsessive about checking my flight details again and again. I’d definitely be the one making the mistake about wearing unsuitable footwear while zip lining. I’ve got loads of marks on my legs from falls on rough ground because I’ve only had my flip-flops on! The zip lining sounds brilliant though.

It’s definitely better to be over obsessive than under obsessive about flights! The ziplining was pretty fun but I think after the first few times you do it the thrill kinda goes away. I’d definitely encourage people to try it at least once though – just with proper footwear! I’m a terrible klutz too so I totally understand! Thanks for stopping by, Clare =)

You are so brave! Always doing something adventurous! I have missed 2 flights and yes it sucks. One going to Australia because it took 3 hours to get to the airport when it usually takes less than 1. My plane was delayed but they wouldn’t let me check in because it was after the check in time closed. So I missed a day in Australia. The other flight was when I was coming home from Brasil. We were in a hotel shuttle to the airport but when we got to the airport, we realized the hotel had not loaded my… Read more »

I’ve realised there are a million ways to miss flights and some are really out of our control – like the time taken to get to the airport. Hope your travel insurance covered it! It must have been so scary to realise your laptop was missing – I know I’d totally freak out. Thanks for stopping by, Anisa!

I have never missed a flight and hope it doesn’t happen in the future (fingers crossed). Fiji looks like an adventure central. I am getting more and more excited about visiting.

Fingers crossed for you too, Ruth! It really sucks when that happens, especially when it’s due to something out of your control (not in this case though – I only have myself to blame!). Fiji is really a paradise for outdoor lovers like you. I’ve been told there’s lots of good hiking (and waterfalls) if you get tired of the beach 🙂

Wow, you guys are so brave! I would never attempt to do something so adventurous. As for missing a flight, I’m over obsessive with getting to the airport on time. It never happened to me, but I feel sorry for your experience.

My fiance is definitely a bit of an adrenaline junkie, and I have a “try everything at least once” philosophy (and also travel insurance, haha). It never hurts to be over obsessive with getting to the airport on time. Hope it never happens to you, Anda! Fingers crossed!

We haven’t missed flights but I’ve missed many appointments and gatherings thinking they were another time:) Funny story!

Haha I’ve been there too.. Once I missed a friend’s wedding because I set my alarm clock to the wrong time! Sigh. Hope you never miss a flight, it’s a real pain to deal with. Fingers crossed! Thanks for stopping by, Cathy!

First of all Fiji looks beautiful. I have never visited but your photos make me want to! I have not missed a flight but had to pay $250 to ship my one piece of luggage which was around 50 pounds from Bangkok to Hanoi Vietnam. I was flying on Air Asia and didn’t read the fine print. If I had paid for my luggage online it would’ve only been around $30. Thank you for the advice and sharing your beautiful photos!

$250 vs $30 is really exorbitant! That’s where budget airlines make their money, I think. Well at least these things make us wiser (hopefully). Thanks for stopping by and commenting, Michelle!