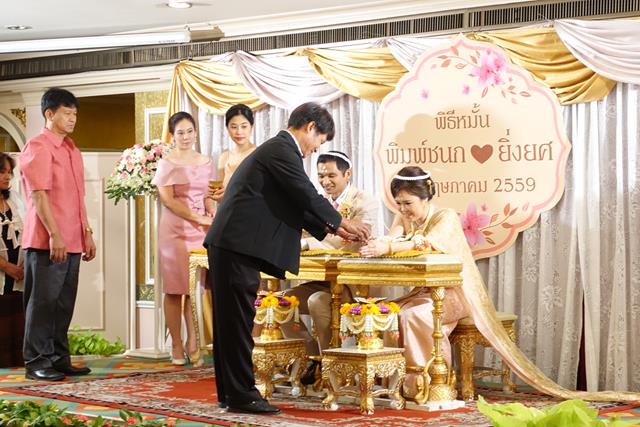 I’ve attended my fair share of weddings, but I’d never been to a Thai wedding before. Imagine my delight at being invited to the wedding of my friend Kheng, who’s from Bangkok!

It’s really intriguing how weddings reflect the culture of the couple getting married. It was fascinating to observe Thai wedding customs – so different from my own and yet with some similarities as well!

First, it started really early. I got there a couple of minutes after the official starting time of 6.30am and the first part of the ceremony was already well underway.

In case you wondered what a BTS station looks like at 6.25am: 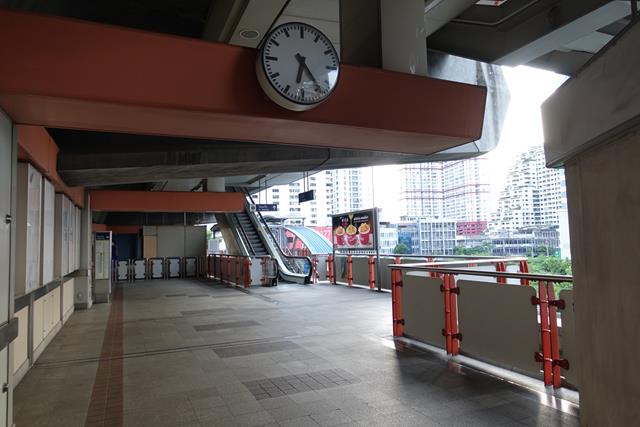 When I arrived, there were Buddhist monks sitting in a row and chanting, holding a piece of string which connected all of them. The couple lit a candle and offered tea to the monks, who blessed them. 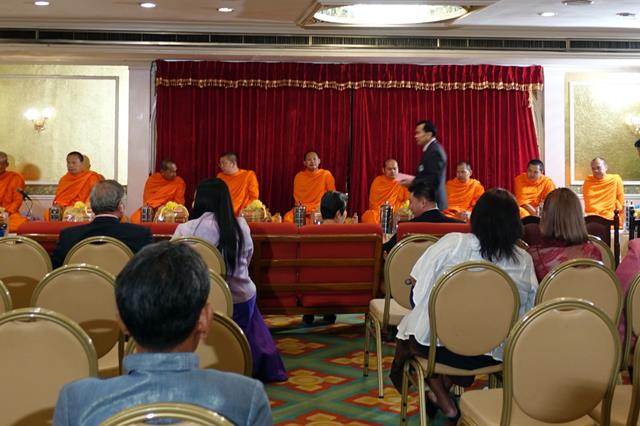 After that, there was a short break and refreshments were available. The coffee and tea were definitely very welcome! And isn’t this the most beautiful cream puff ever? 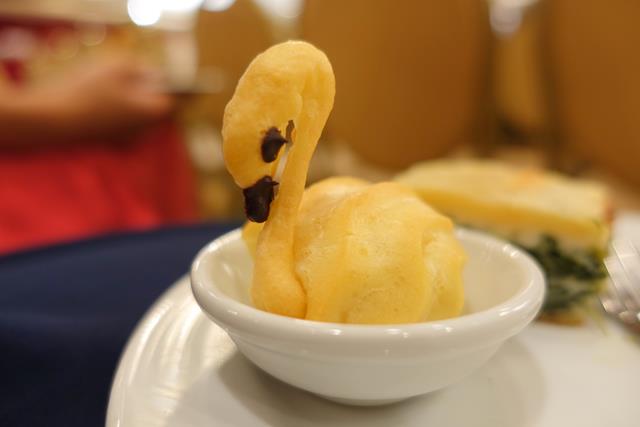 This was followed by the Khan Maak procession, which has some similarity to what is known as gatecrashing to us Singaporean Chinese. The groom and his family form a procession to take various gifts to the bride and her family. These items have a symbolic meaning, such as health, prosperity, longevity, etc. 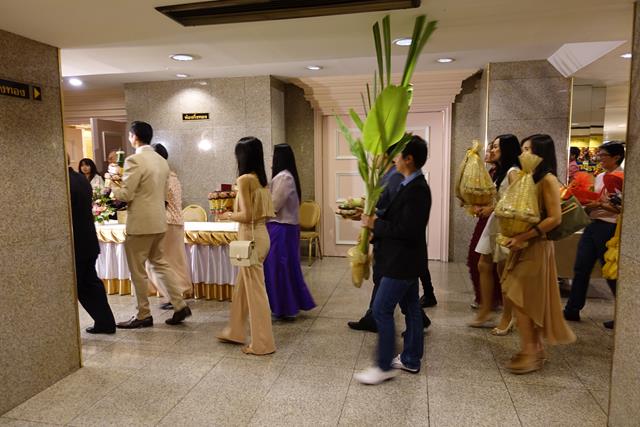 When the groom arrives at the bride’s home (traditionally – in this case it was in a hotel), he must pass through symbolic “doors”, where the groom must negotiate entry with members of the bride’s family (upon payment of a fee or “toll”). 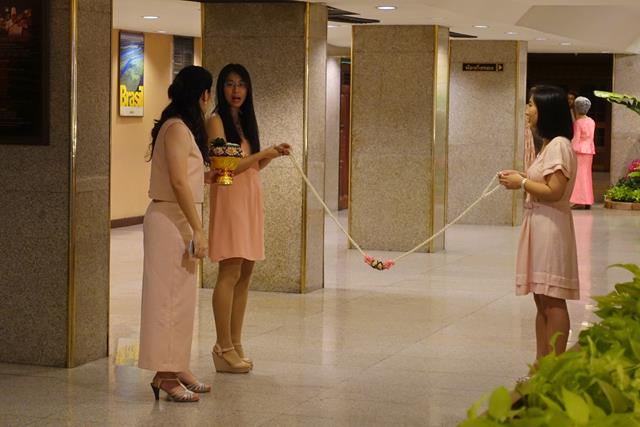 In gatecrashing, the groom and his groomsmen must also perform certain tasks set by the bridesmaids in order to gain entry into the bride’s home. It’s an opportunity to make the guys do ridiculous things and also squeeze some money out of them. The Thai version is much more dignified, I must say. 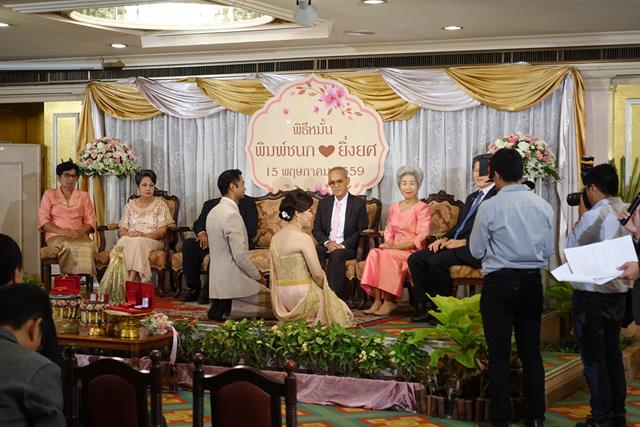 The dowry was laid out and counted (nowadays, the bride’s parents often give the dowry right back to the couple as a wedding gift). Then a round tray was placed before the couple and people came forward to sprinkle flower petals on it in a circular manner as a form of well-wishes. 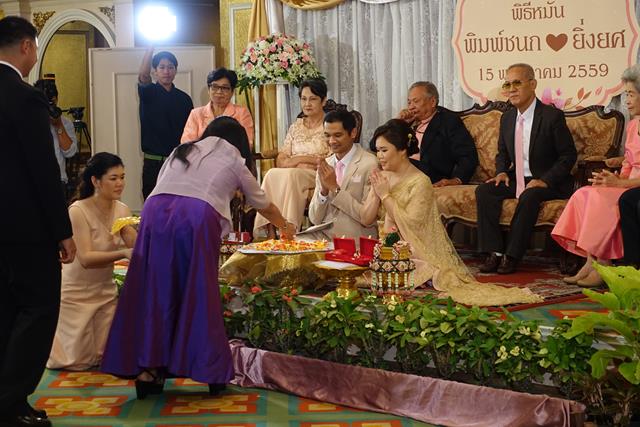 Next, the couple presented gifts to their elders. 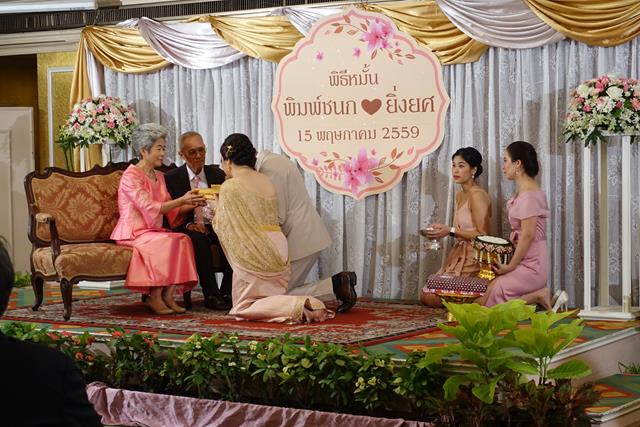 After that, they exchanged rings, signifying that they’re now engaged.

They each then put on a ceremonial headdress (linked to the other by a white string) and sat at the traditional water pouring tables.The senior members of the family put three dots of white powder on their foreheads, and the guests took turns to pour water over the couple’s hands and give their well-wishes. 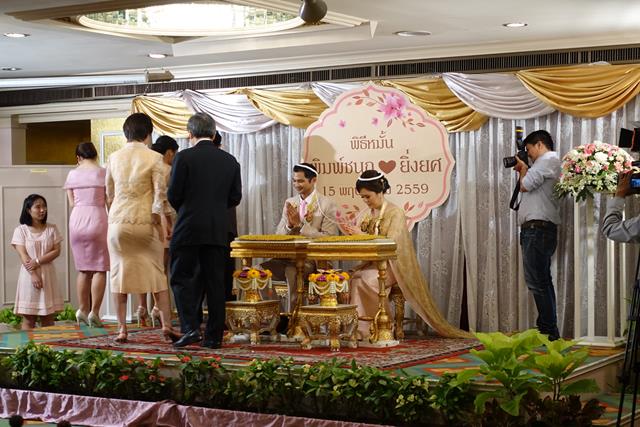 The water pouring ceremony is where the couple officially become husband and wife. 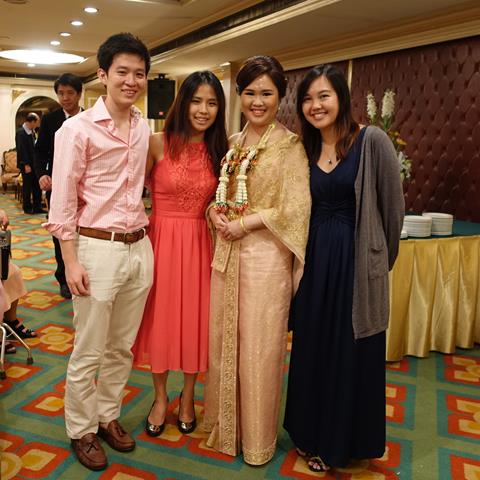 It was now about 11am. After a short 30-min break, it was time for the wedding celebration / lunch reception. 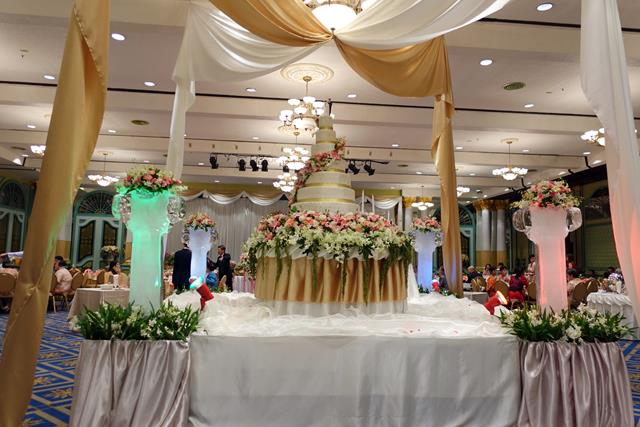 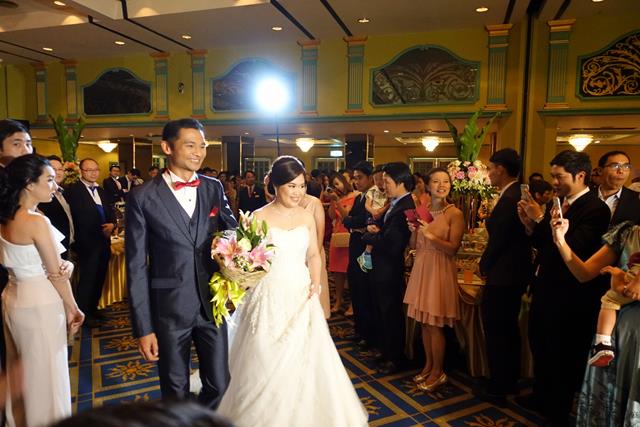 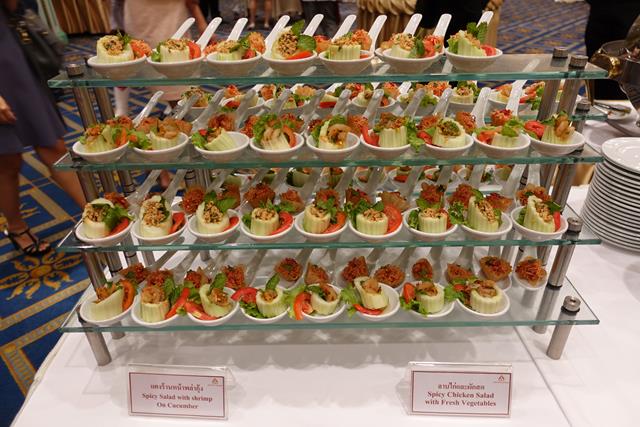 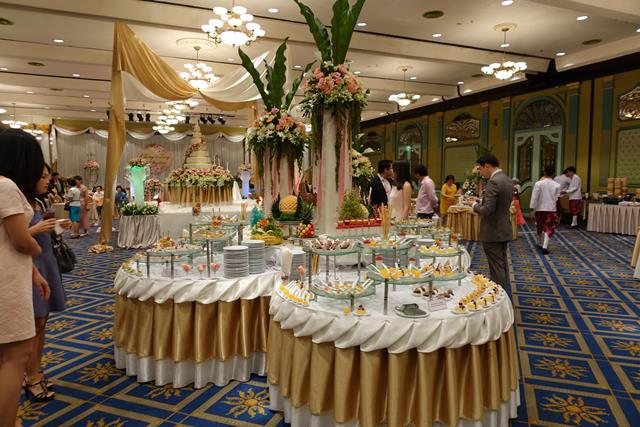 I especially enjoyed the chicken rice, which was served with chilli sauce with peanut in it – different from the Singaporean version but just as yummy! I might have had multiple servings of this. 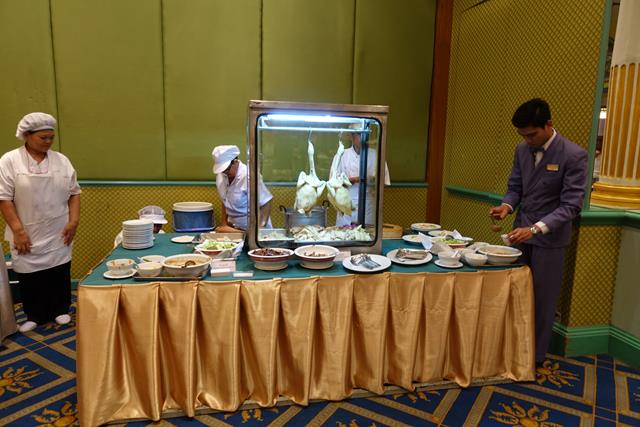 Not to forget the desserts, which were so pretty that I took an inordinate amount of pictures of them: 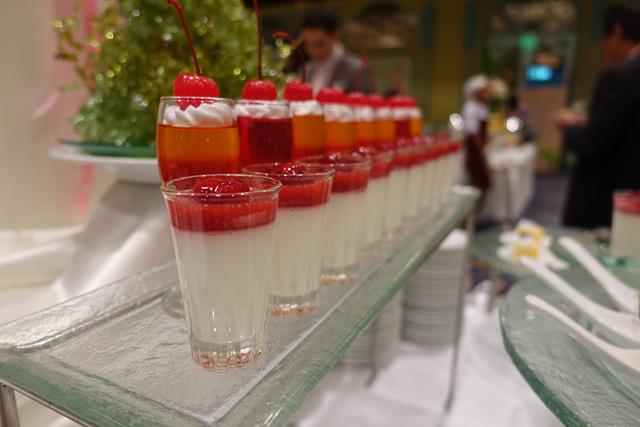 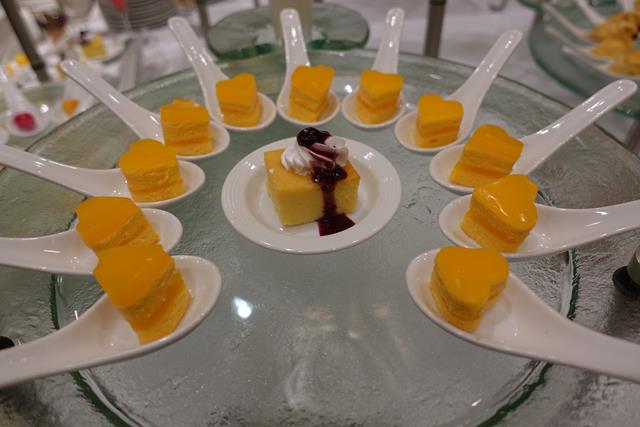 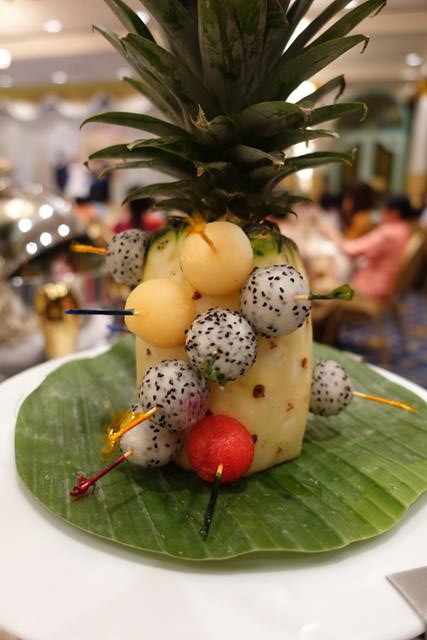 Even though we also customarily have a cake-cutting ceremony, nowadays it’s rare that the guests actually get to have any cake after that, so I really appreciated these slices of cake that we received after the cake-cutting!

There were also speeches and a special item (including a very cute photo montage of the couple from the time they were babies). 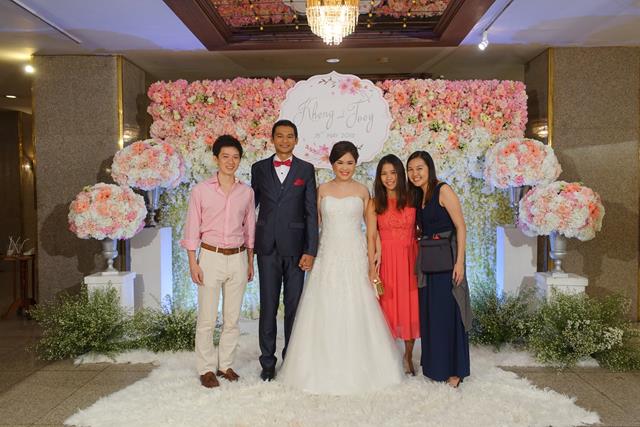 It was a great honour to attend and so happy that I was able to share in their joy!

(For more information on the traditional Thai wedding ceremony, check out this excellent article by Learn Thai with Mod.)

Have you ever seen wedding traditions from other cultures? What was it like?

On a separate note, I’m very excited to have been featured in Travel Notes & Beyond. Check out my interview with Anda here!

Definitely! I think a lot got lost in translation cos it was all in Thai but even so it was very fun =)