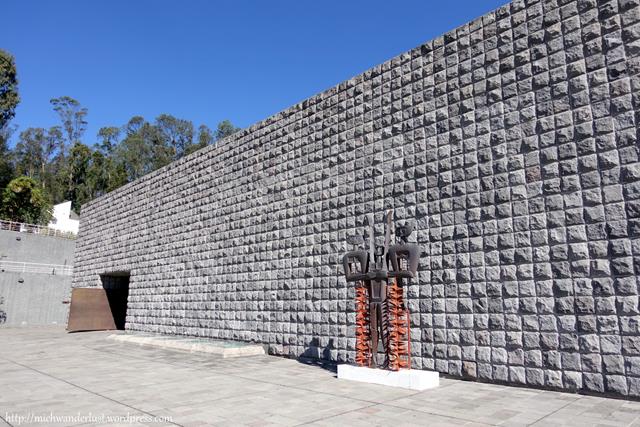 After visiting the Basilica of Quito, we strolled through a small neighbourhood park with some kids at the playground. The school holidays end in two weeks, so these kids were making the most out of it!

My teacher-guide remarked that fewer kids frequent the playgrounds these days – many prefer to stay home instead and watch TV or play computer games. The same thing is happening in Singapore (and all over the world, I’m sure), and it’s a real pity.

(I haven’t seen anyone playing Pokemon Go on the streets of Quito, for which I am very thankful. In fact, most people don’t even look at their phones in public. It may be out of necessity and prudence, but there’s a certain merit to it.)

Near the park, you can find this Incan monument. It goes too deep under the ground to be moved, and now it’s apparently used as a poo spot by dogs. You can find these at a number of strategic locations all around Quito. Some believe that these have helped Quito withstand the numerous earthquakes that have shaken the city since its inception. 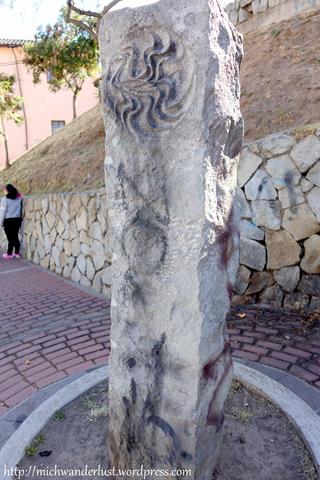 A little further on, we came to the Park of Haiti. There are parks of various countries all over the city! This one is next to a former hospital for TB which is now an art museum. 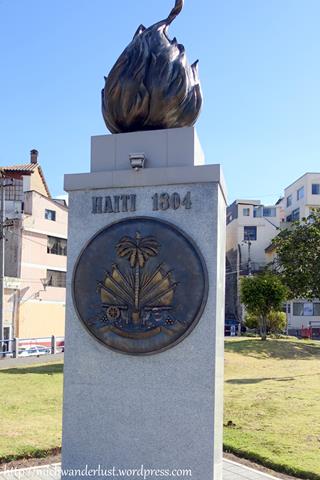 A little further on, we came across some really nice street art. There’s plenty of graffiti in Quito (including in tourist attractions like the towers of the Basilica) – most of it just people scrawling their names and stuff. This was different and I loved the way it brightened up the street! 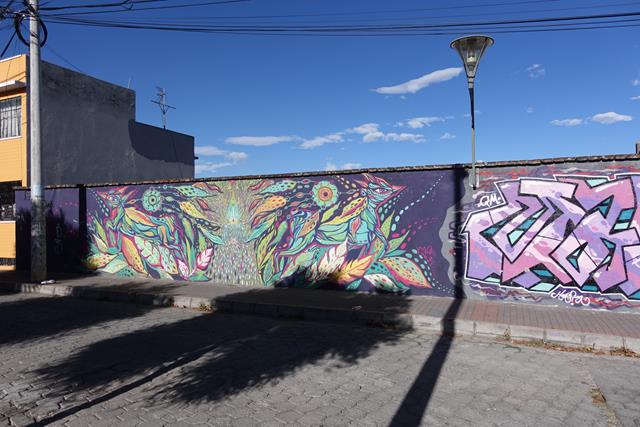 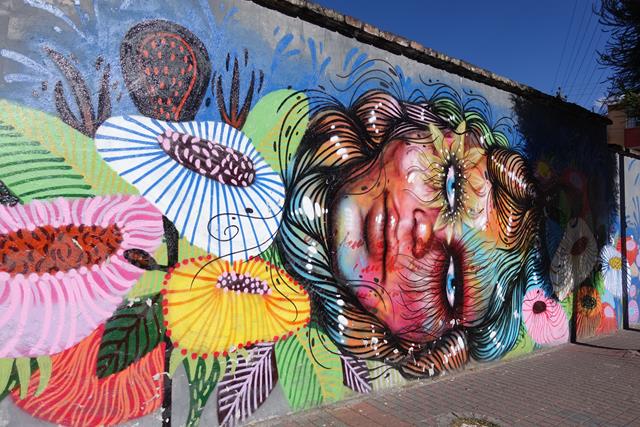 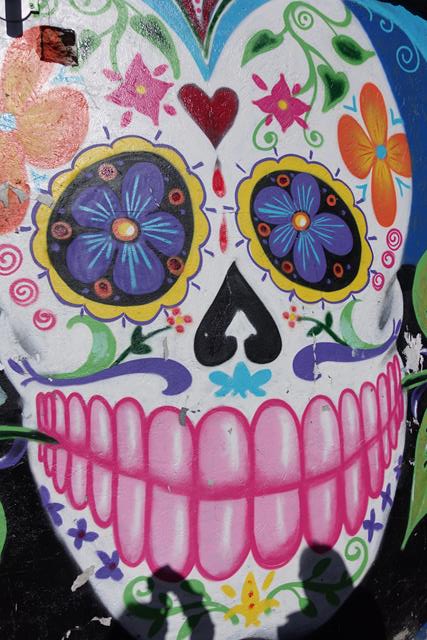 Ecuadoreans celebrate the Day of the Dead on 2 November (like Mexico), but slightly differently (without the skulls etc.), so this could be a reference to the Mexican version? I have no idea.

On the Day of the Dead in Ecuador, they eat ceremonial foods like colada morada (a deep purple porridge) and guagua de pan (bread shaped like a baby or guagua). (Guagua is from Kichwa.) The indigenous people and the mestizos celebrate it differently – for the indigenous it’s a more joyful occasion but it’s a sad one for the mestizos.

Below is a school, one of the most traditional in Quito, called Mejia. It was founded in 1897 – can you tell? It used to be a boys-only school but now girls can attend too. 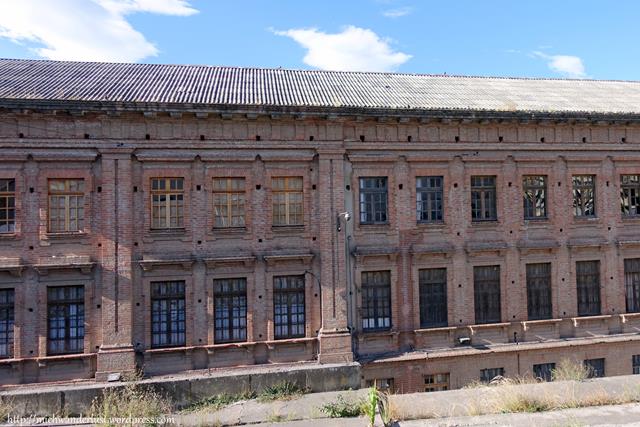 A little further on, we arrived at La Parque Alameda, a charming little park which is shaped like the tip of a spear.

Here you can find: 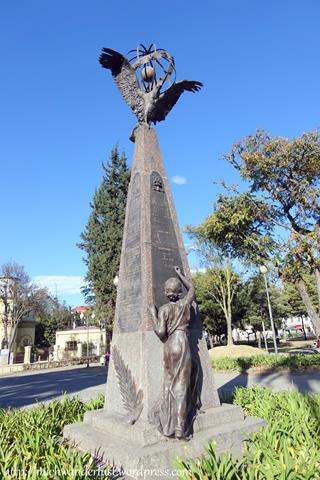 The next day (Tuesday), I visited the amazing La Capilla del Hombre (Chapel of Man), an art museum founded by the famous Ecuadorean painter Guayasamin, with another teacher-guide from the school. It’s in the northern part of Quito, in a neighbourhood called Bellavista (beautiful view). We took a bus from the Old City which took about 40 minutes but was only 25 cents. Lots of visitors just take a taxi, it seems.

The view from the museum is beautiful indeed! You can see parts of Quito and the surrounding mountains. 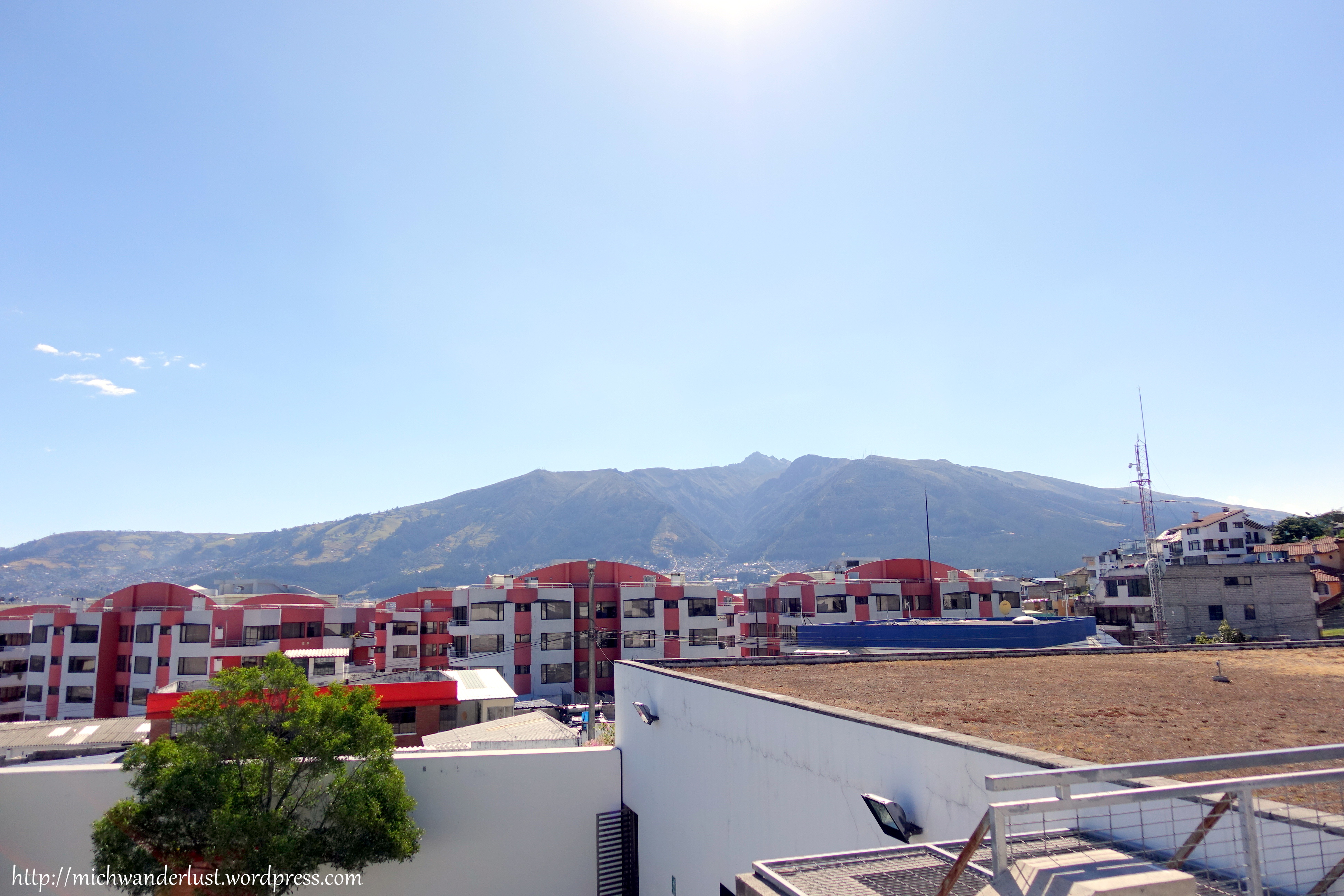 Photography isn’t allowed inside the museum but I think it’s well worth the journey. It’s a showcase of Guayasamin’s work – mostly from his second and third collections, which are about the cruelties and injustice of war, poverty, oppression, etc., and a tribute to his mother and all mothers around the world, respectively.

He travelled from Mexico to Patagonia from 1944 – 1945, visiting small towns and villages along the way and this resulted in his first collection (of which few remain in Ecuador).

His style is very distinctive and I really liked the way he used his art to make statements. You can see his humanist philosophy in the art and the various quotes from him around the museum.

After the museum, we visited his house which showcases his massive collection of pre-Columbian and colonial art as well as some of his own works, including portraits he did of famous people.

Look out for the Tree of Life, under which he and his best friend are buried!

Admission: $8 for adults. Discounts available for students and older people. Free for children up to 12 years old.

A guided tour (in Spanish, English or French) of both the house and the museum is included in the ticket price. 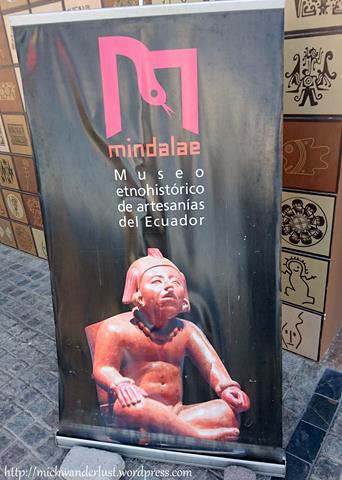 It’s run by a foundation (Fundación Sinchi Sacha) with the goal of raising awareness of and promoting indigenous culture in Ecuador. There are over 20 distinct indigenous groups in Ecuador today, so it’s no mean feat!

Possibly my favourite section was the one on traditional costumes. 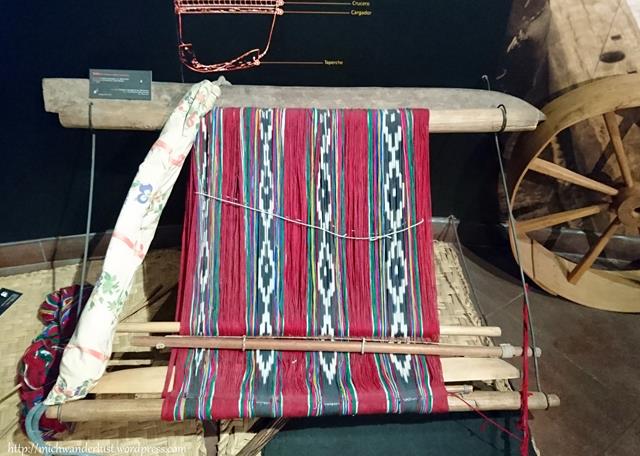 A smaller weaving machine, which bears an uncanny resemblance to the ones I saw in Chiang Mai earlier this year. Don’t they look similar?

How remarkable, given that the two countries are halfway across the world from each other! 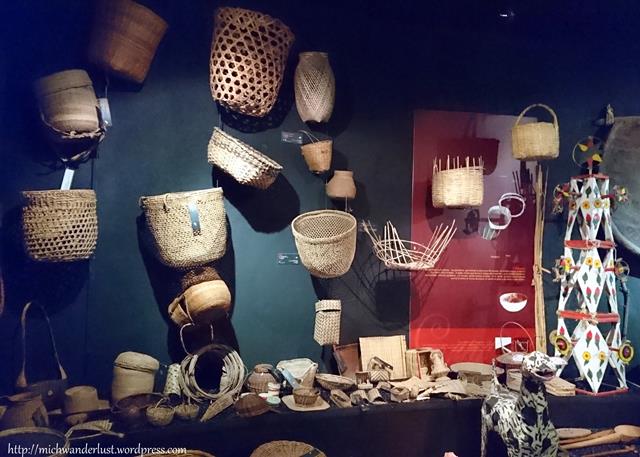 It’s sad that these baskets are being (or have been) phased out – think of how much plastic would be saved if we reverted to using these baskets to go grocery shopping! 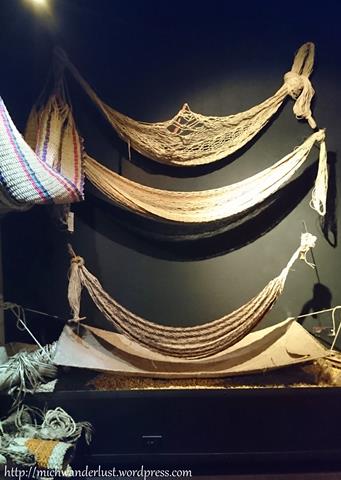 In Ecuador they have neither crocodiles nor alligators. They have caimans (which, according to Wikipedia, is a member of the alligator family). No caimans on display, but there is a caiman-skin bag (from the Amazon region): 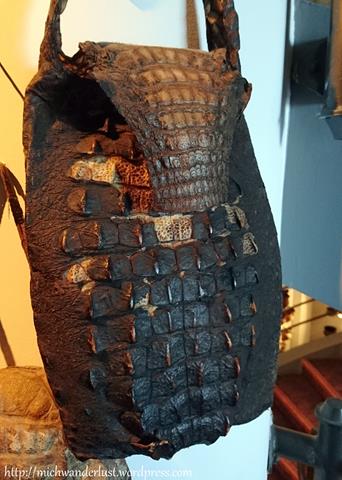 Faces of the indigenous people of the Amazon: 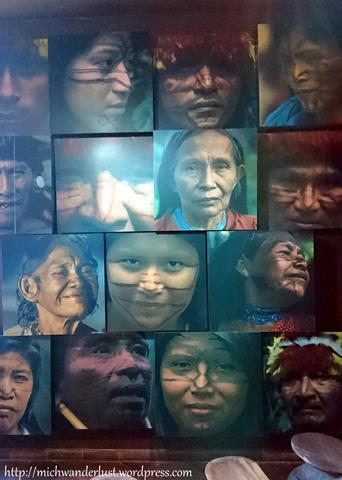 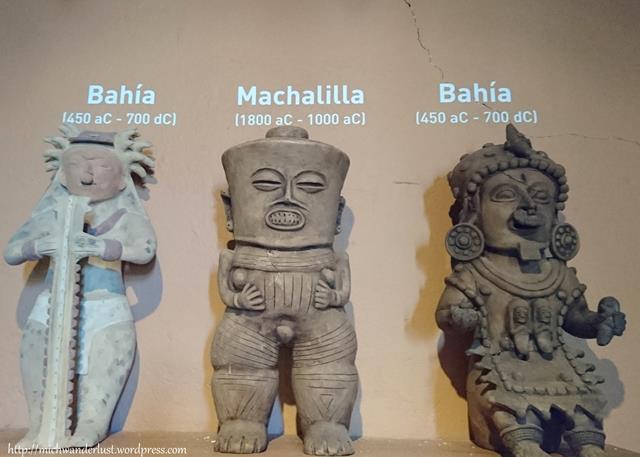 Fun fact: Manabí is also the home of the so-called Panama hat, which didn’t actually originate in Panama.

Even though it’s fairly small, I think this museum is well worth visiting, not least because it’s a very worthy cause. The foundation is working with indigenous groups to preserve and promote their traditional crafts, and you can find their handiwork for sale in the gift shop.

I didn’t get anything because I don’t want to lug it around for months, but if I’m back in Quito towards the end of my trip, I just might!

[…] Here you can find really traditional family businesses. We popped into a shop selling woven fabrics (sweaters, scarfs, wall decoration pieces, etc.) made of either sheep or alpaca fleece, and either handmade or woven using old-school weaving looms like those I saw in the Mindalae museum: […]

[…] Here you can find really traditional family businesses. We popped into a shop selling woven fabrics (sweaters, scarfs, wall decoration pieces, etc.) made of either sheep or alpaca fleece, and either handmade or woven using old-school weaving looms like those I saw in the Mindalae museum: […]

[…] already visited this once before, but it was so good that I didn’t mind going again with Linda and a few of her friends that […]