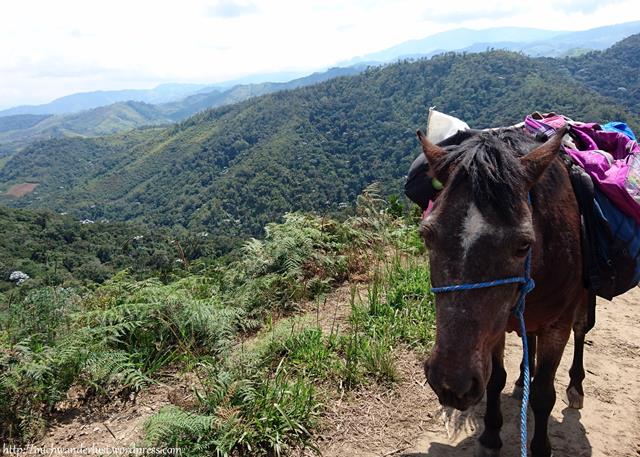 After the one-week school vacation, I went back to teaching. It’s great that I have a lot of support from Profesora Blanca, the regular teacher. She wants the kids to take English classes more seriously and stop treating it like a vacation, so she told me to give them homework and also wants me to create lesson plans.

This means more work for me, but it’s fine – I do have plenty of time, after all! It’s also really rewarding to see the kids actually retaining some stuff from what I’ve taught them. They tell me they’ve never had English homework from the previous volunteers – but there’s always a first time for everything, right?

I’ve also made good on my threats to kick kids out of class when they misbehave. So thankful to have that option!

I’m also really enjoying my one day of farming a week with Ned and Patricia. Sometimes, they bring newly-arrived volunteers with them, so I get to meet them and it’s always interesting to talk to other volunteers. I met an organic gardener from Germany called Christian – he is very passionate about sustainability and sustainable farming practices. It’s really encouraging to know that there are people like that in the world.

The next week, we planted morocho (a type of corn) and broad beans at the place of one of Patricia and Melchor’s sisters. She’s also the mother of one of the 4th-graders, so I got to hang out with him and his little brother (not yet in school) after we had finished work for the day. We ate popcorn and watched a Discovery Channel documentary, which was really impressive. It’s great that the kids are watching something of educational value instead of cartoons all the time!

The planting itself was pretty straightforward: you poke a hole in the ground using a stick with a sharp end, and then drop 4 or 5 seeds into it. I only did the seed-dropping bit, but it was tricky because the field is on a fairly steep slope and they had recently burned it, so the ground was covered in slippery ash. 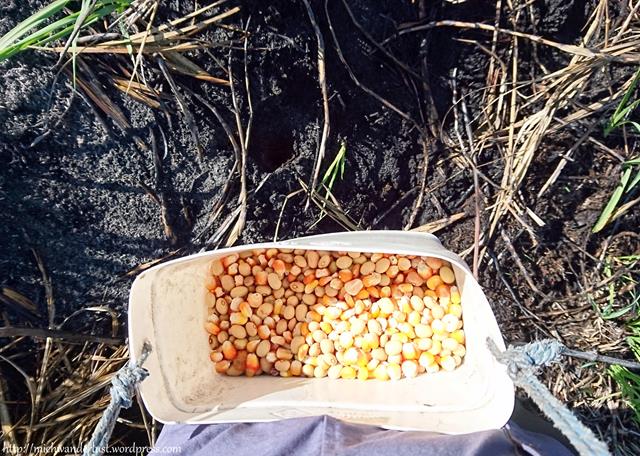 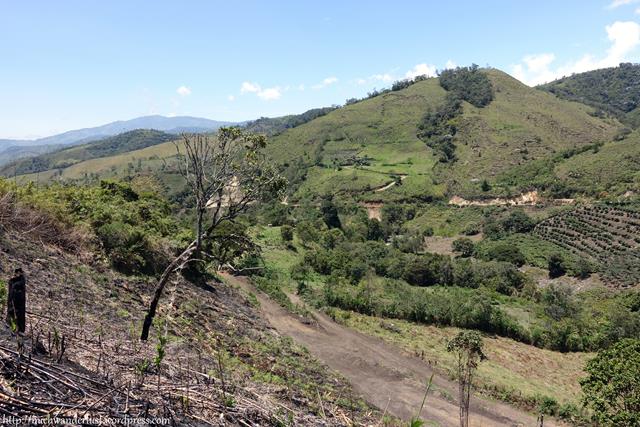 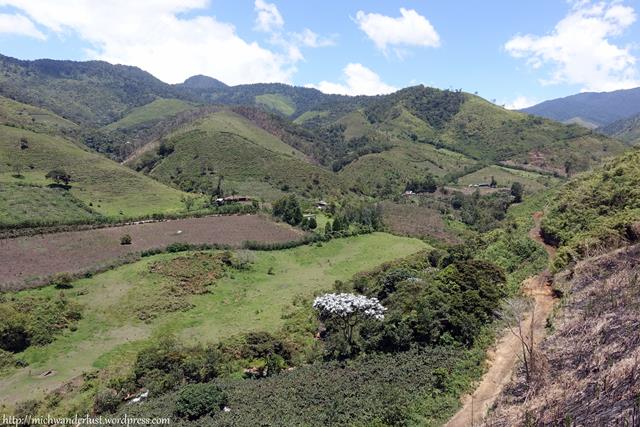 The walk back home was no less breathtaking. 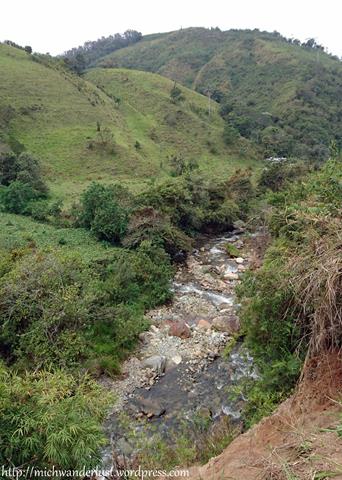 One of the family dogs followed me all the way to Snra Elva’s house and then spent the afternoon periodically whining – probably couldn’t find his way back home! The poor thing had to wait until we finished so that he could follow us home, but once he found his bearings again he was super happy and bounded ahead of us. I guess that’s the last time he follows me anywhere!

Developing country problems, I guess. The roads around here are just dirt roads, so the other day a tractor came to… smooth the road? Put more dirt on it? I have no idea. But the upshot was that the road became very soft and, once it rained, very muddy. 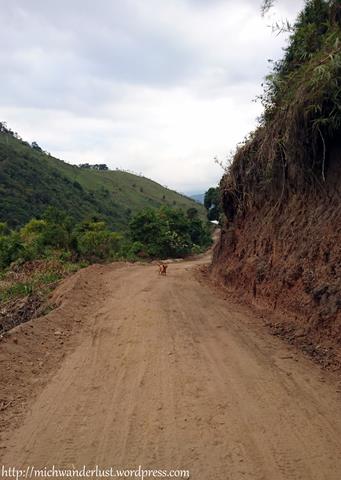 Which was annoying in itself, but the worst part was that apparently some mud got into the water tank as well, contaminating the tap water. So we had dirty water, and then we had no water at all – someone turned off the water tank, I think. I had to fetch a pail of water from the river for defeathering a chicken – super old-school! (The river water was also muddy, for what it’s worth.)

Eventually, the water came back. It was dirty at first, but I think eventually all the mud got washed out and it looked ok after a while.

There was no school on Friday as Profesora Blanca had to attend something in Apuela. Rosa was not around most of the day as she went to see a doctor quite far away. I’m completely useless in the kitchen, so Anthony (the 11-year-old) taught me how to boil eggs and make coffee for breakfast.

After that, we went blackberry-picking and made juice from the blackberries.

After lunch (which Rosa had thoughtfully prepared beforehand so it was just a matter of heating it up), we waited around for her to come back and spent some time by the river near the house. 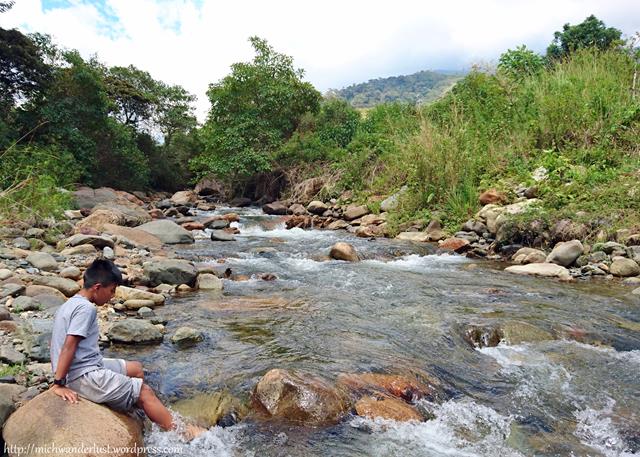 I haven’t seen fish in this river, but it’s still absolutely gorgeous. 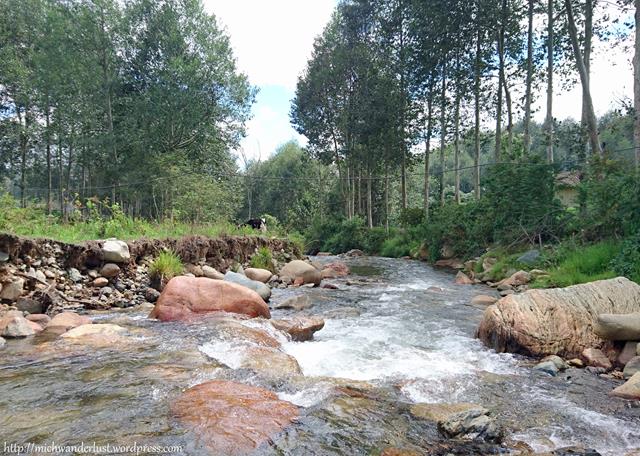 There are many waterfalls in this area. On Saturday, I went with with Rosa, Anthony and Kevin to a waterfall which involved hiking through the páramo (alpine plains) and cloudforest. 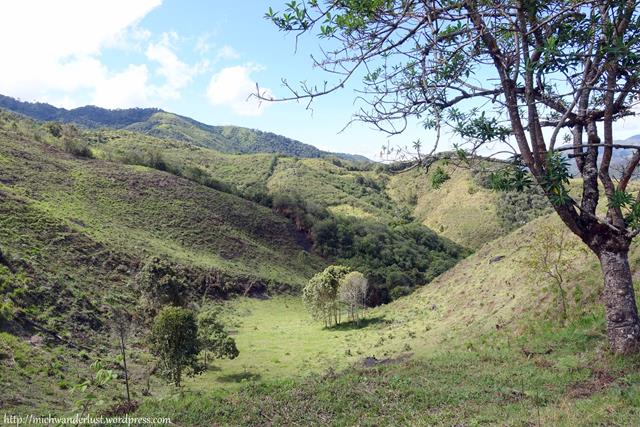 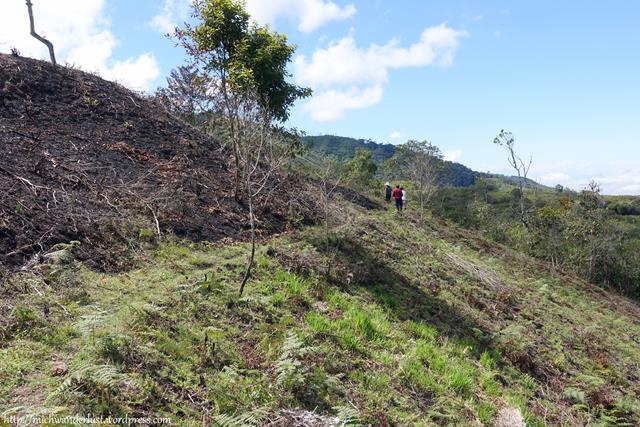 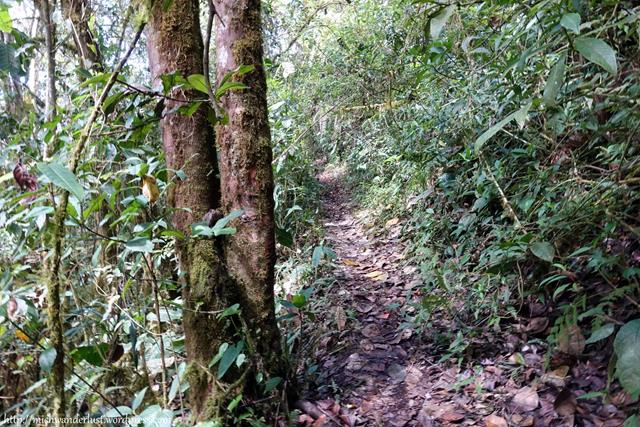 Anthony doing an impression of Tarzan: 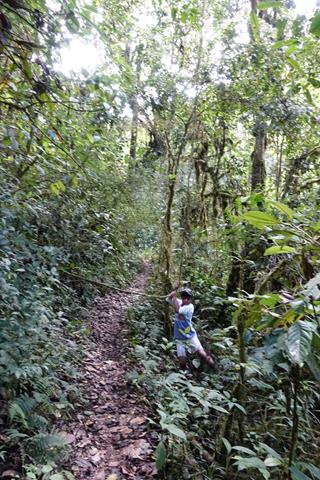 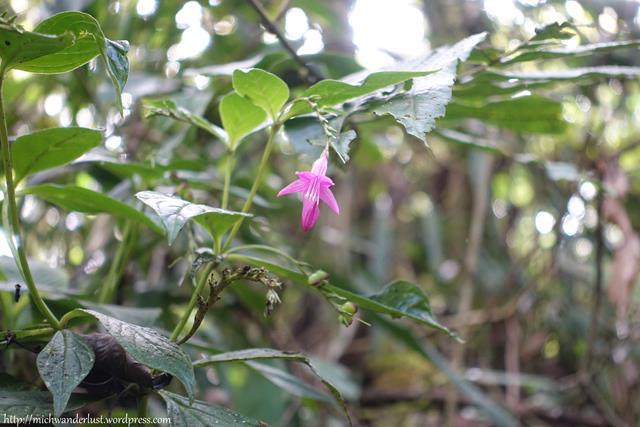 We couldn’t find a well-defined path to the waterfall, so we basically ended up scrambling through a narrow and barely discernible path to get there. 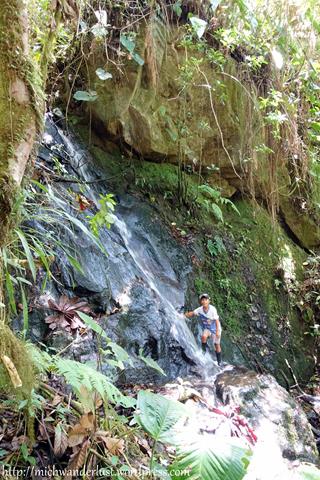 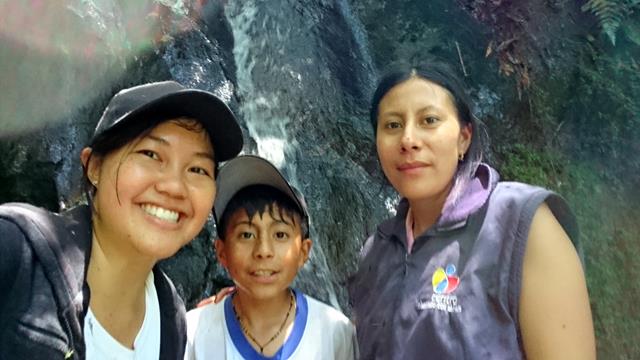 The waterfall itself was a little underwhelming, but it was definitely a memorable adventure!

To get out, it was climbing practically straight up through dense bushes and trees, using both hands to grab any branches available. The ground was quite soft and I slid a couple of times when the ground gave way under me.

As is usual in this region, the scenery was amazing, although we emerged slightly worse for the wear. My clothes were so muddy, in fact, that I had to hand wash them. It made me appreciate the washing machine more than ever! 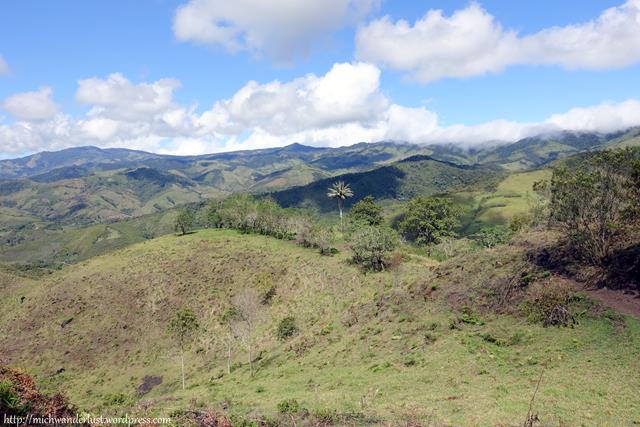 To top off an eventful Saturday, a very kind neighbour gave us some quimbolitos that she’d made. 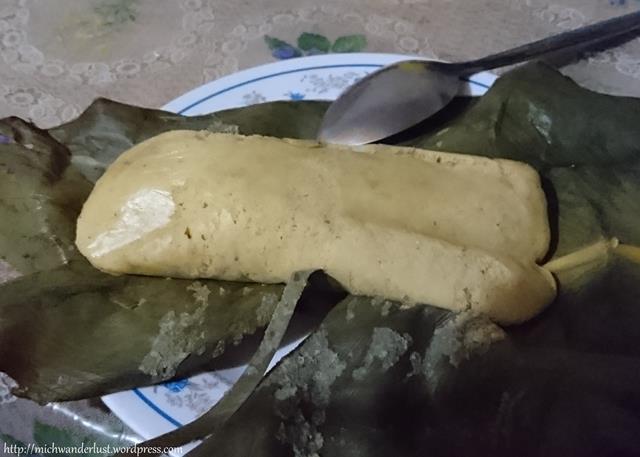 They look similar to humitas but are sweet. Texture wise, they’re quite soft (made from cornflour) – think sponge cake. They were delicious and, much like the humitas that we made in Otavalo, they disappeared very quickly.

Once a year, the older children (third-graders and above) get to go on an excursion with the schoolteacher. This year’s edition involved a long trek, lots of yummy food prepared by the teacher and one of the parents, bathing in the river and lots of games.

Among other things, we had to cross this bridge of one log’s width. 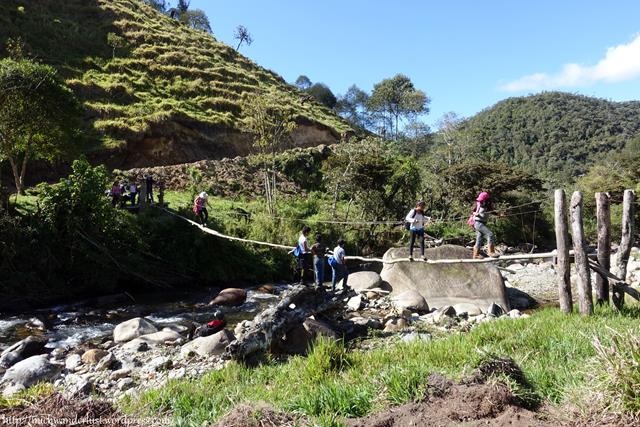 I cross a bridge that’s two logs wide every day, and it’s no picnic in the park. Luckily, I wore boots (best $9.25 ever spent!) so could just wade across the river. 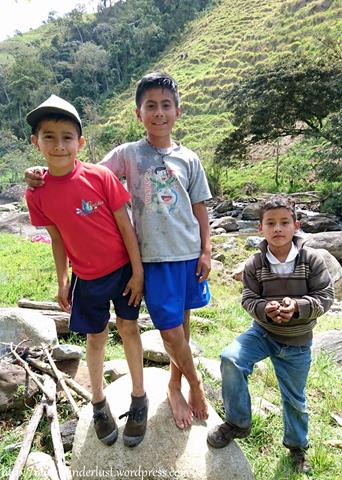 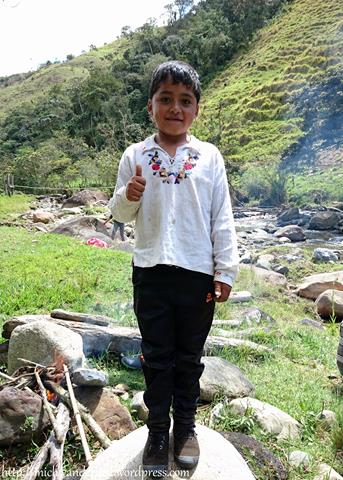 Prior to the excursion, I’d made a point of asking the kids who was going to do the cooking. Despite repeated assurances that “everyone” would do the cooking, it predictably ended up being the adults doing the cooking while the children played (except me – my job was to supervise the kids). I taught them the classic game of Poison Ball, which seemed to interest them for a while, but then they turned to the even more classic game of Catching / Freeze and Melt. 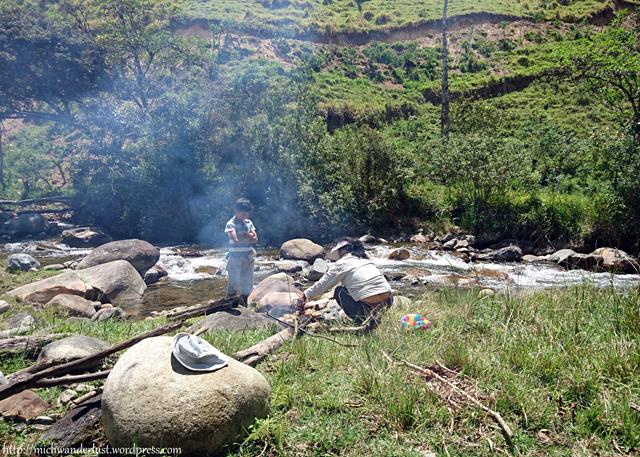 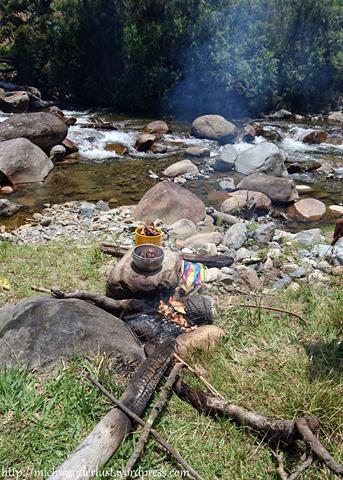 We eventually enjoyed a delicious brunch of grilled chicken, boiled potatoes, salad and tostados (roasted corn kernels). I only say “brunch” because I had lunch after that!

While I enjoyed the food enormously, what the kids probably enjoyed most was bathing in the river. Once again, I had to supervise them, which was more than a little nerve-wracking at times!

No problem 🙂 stop by my blog when you get the chance

[…] mentioned this traditional Ecuadorean snack before. They’re kind of like small sponge cakes steamed in achira leaves, and are absolutely […]