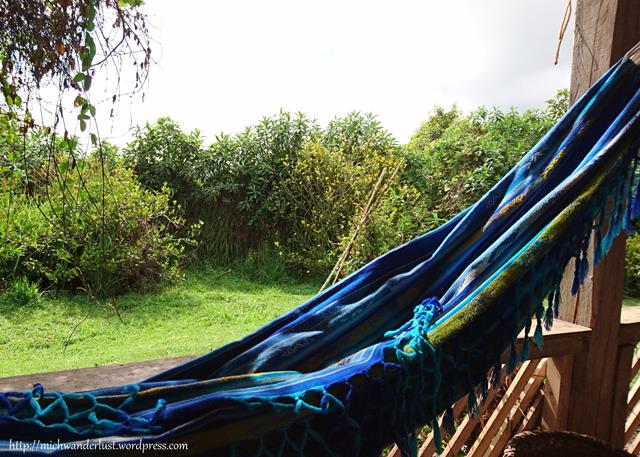 Changes of plans are very common in this part of the world, and this is a fine example. Initially, I wanted to make a day trip to San Antonio to visit Ned and Patricia (and their newborn), but was convinced to make it a 2-day 1-night stay, given the logistical difficulties in going to and from San Antonio.

Thus, I headed over to their place on a Friday afternoon (the ride cost $8), intending to return the next day. All my plans were thrown into disarray, however, by the weather. It didn’t just rain – it poured. I ‘d brought my rain jacket, but not my rain pants (not my smartest move), so I was drenched from the waist down by the time I arrived at their place. It didn’t help that my supposedly waterproof hiking boots can no longer be called waterproof in good faith!

I hadn’t packed a change of pants or socks, thinking that I was only to be there overnight. I therefore had to borrow a pair of pants and shoes from Patricia, although I later remembered that I had flip-flops.

Don’t get me wrong, though. Despite this unexpected start to my visit, I wasn’t unhappy. I made empanadas with Patricia once I’d changed into drier clothes and it was really fun! There’s just something cozy about staying indoors when it’s raining and cooking/baking, isn’t there? 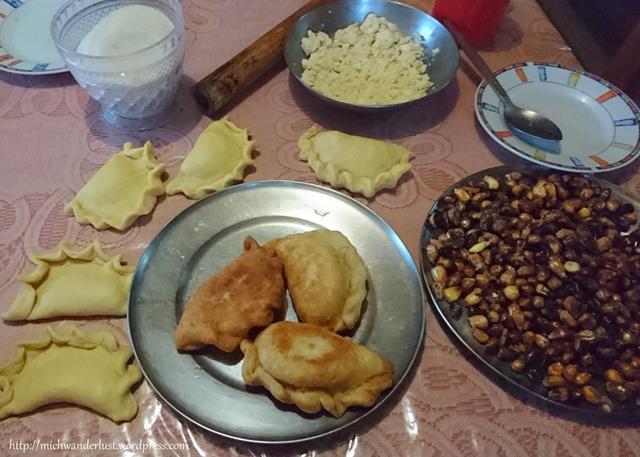 My empanadas were very ugly and looked like curry puffs (a Singaporean snack), despite my never having made curry puffs in my life. They tasted just fine, though. I ate a lot of empanadas while I was there!

Patricia also attempted to teach me how to crochet but I think that was an unequivocal failure. I’d definitely love to learn how to crochet, though. Someday!

The next day (Saturday), I helped Ned with some chores around the farm – feeding the guinea pigs and rabbits, checking on the cows, and harvesting some sweet potatoes and potatoes to cook later on. 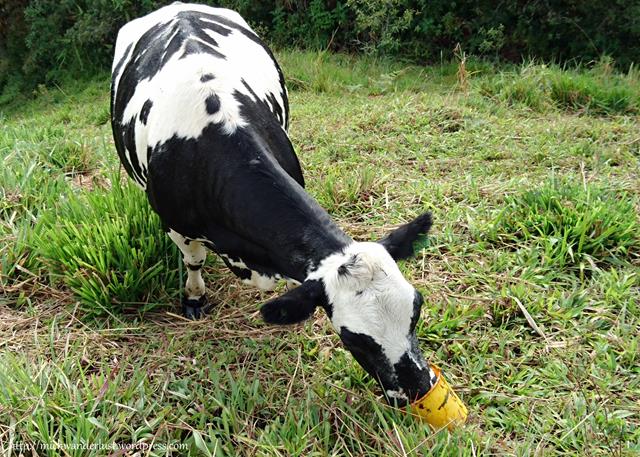 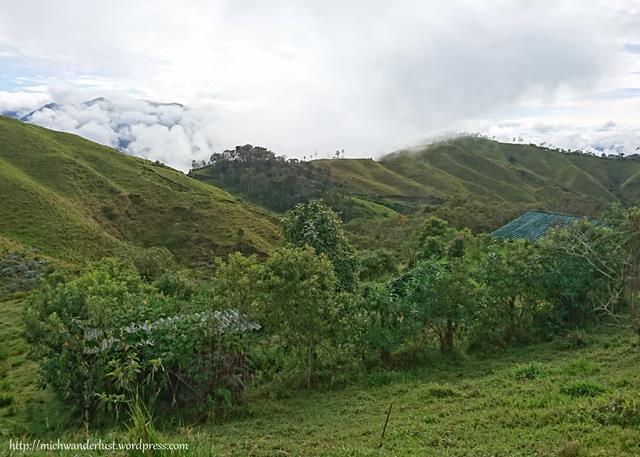 One of the many fruits here in Ecuador that I’ve never seen elsewhere: taxo. 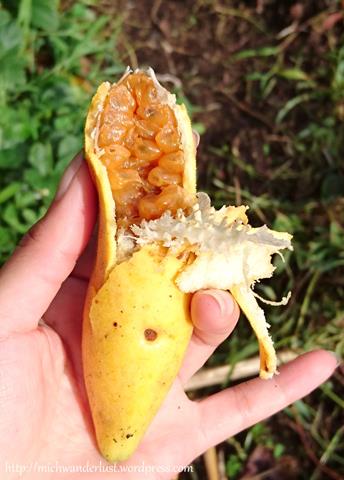 It’s related to the passionfruit and is quite sour, although they often make bolos (ice lollies) or batidos (shakes) with it. A little bit of sugar goes a long way!

Then their new fridge arrived – tied to 2 wooden sticks and carried on the shoulders of 2 men for a good half hour (at least) over hilly terrain, which included passing through a river. As with so many other things here, I marveled at how they could do it. It was quite a sight!

I decided to stay one more night, as my clothes were all still wet. This turned out to be a good decision because it poured yet again in the afternoon!

On Sunday morning, I had the most delicious banana pancakes for breakfast, carried baby Andy for a minute (the least noisy baby in the world, probably) and looked at photos of Ned and Patricia’s wedding before catching a ride to Cuellaje with one of their neighbours, not without a bit of reluctance. If it hadn’t been Sunday (my Internet day), I might have considered staying longer! It’s always lovely visiting them.

I’ve started concentrating more on grammar with the older kids – not just vocabulary – and their progress is quite gratifying. They’ve learned how to conjugate verbs in the simple present tense, and now we’re working on how to say things in the negative (e.g. “he isn’t young”) and formulating questions. I don’t think we’ll get to the past tense (much less the future tense) before the end of the school year, but I’m glad that they can at least now formulate simple sentences in English instead of just knowing isolated words.

I think it’s a lot drier and less fun for them because it’s more difficult (although not impossible) to play games involving grammar – plus, they have to think harder! I make them do a lot of translation work (translating simple phrases from English to Spanish and vice versa). Not exactly CELTA-style, but I’m doing a lot of improvising here!

To spice things up for them, I bought some chops featuring cartoon characters like Princess Jasmine from Aladdin and when they manage to complete an exercise without any mistakes, they get it stamped in their notebook. They all seem to really like it and are always trying to collect more. Sometimes they even ask me for more translation work!

One day we celebrated the birthday of one of the 7th-graders with a piece of bread and matches in lieu of a birthday cake. That works too, I think. 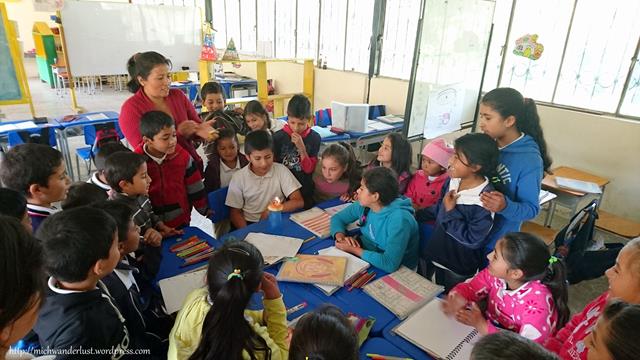 Thanks to a government school food programme, the kids now get milk and biscuits every day. I just adore the packaging! 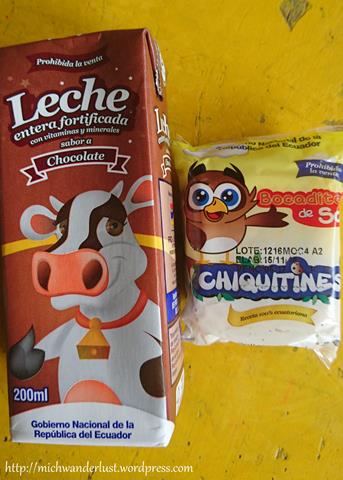 The 3rd graders doing some weeding: 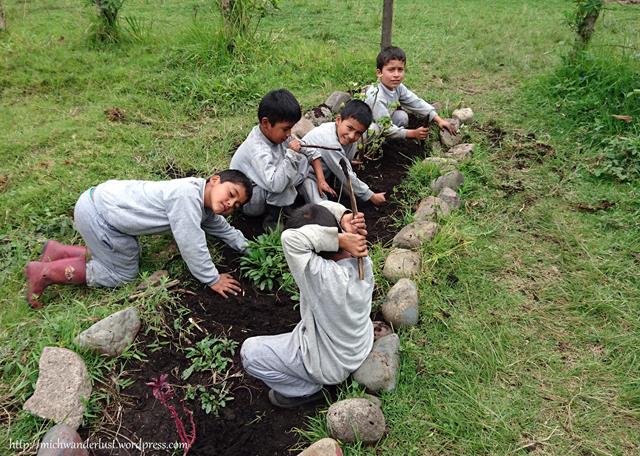 We now have fresh milk regularly because some of the cows have just given birth. 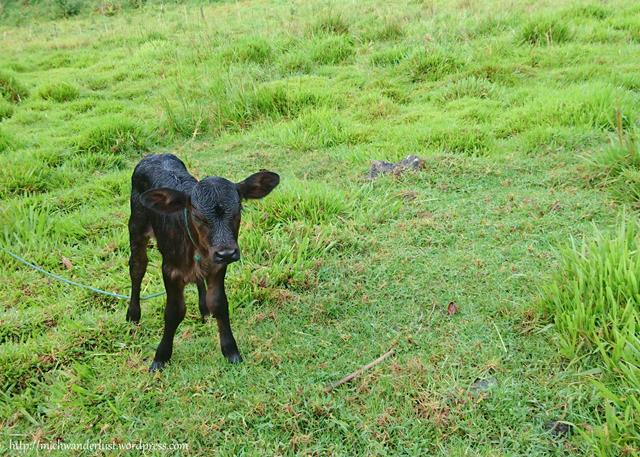 This calf was only about 2 days old here. I first saw it when it was a couple of hours old and couldn’t even walk steadily. They grow really fast though!

I’ve mentioned this traditional Ecuadorean snack before. They’re kind of like small sponge cakes steamed in achira leaves, and are absolutely delicious.

One day I helped to make them, although the extent of my contribution was wiping down the leaves (which were wet from the rain) and scooping the dough into the leaves and then folding it.

We added some chocolate so it was extra nice! 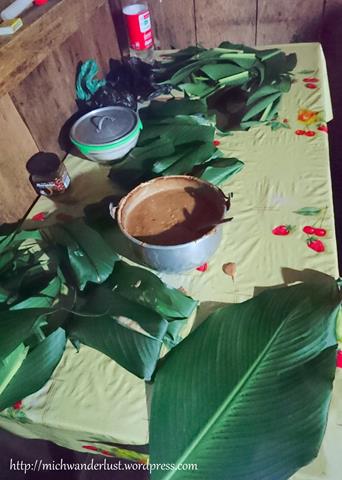 The quimbolitos are then steamed for about 20 minutes. 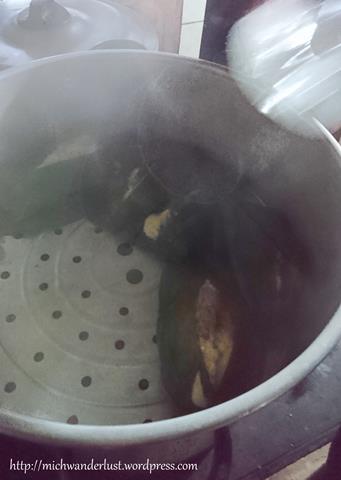 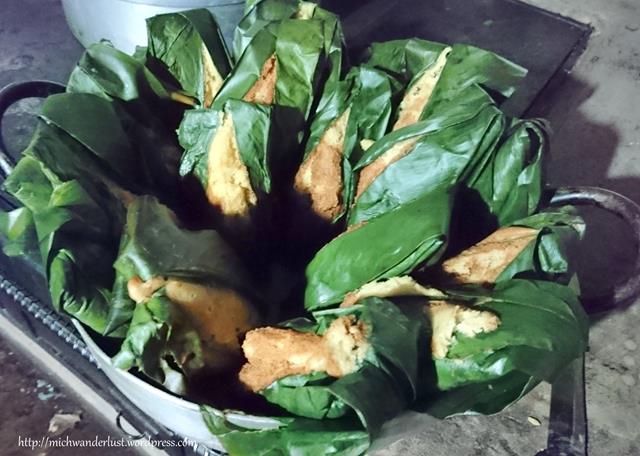 Definitely one of my favourite local snacks.

[…] written extensively about making quimbolos (and how yummy they are) – see e.g. here and here – but this was the first time making chocolate quimbolos using cocoa beans, […]