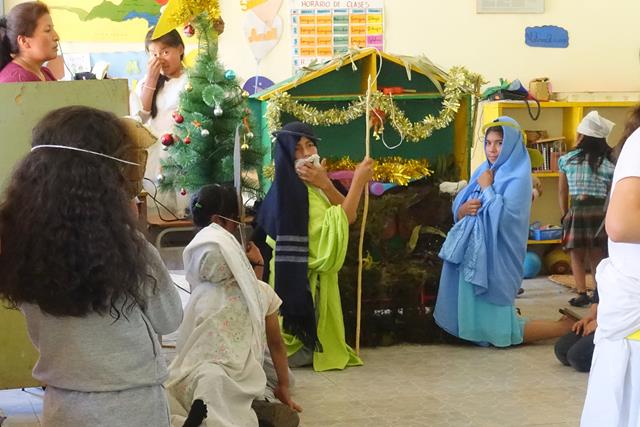 Knitting is one of those things that I did briefly once before a long time ago. It was so long ago that I’d forgotten entirely how to knit, but for some reason I’d been thinking about picking it up again. Perhaps it was that failed crocheting session with Patricia, or seeing all the weaving looms in Museo Otavalango, or the fact that I have plenty of time on my hands in Rosario.

I later passed the crocheting needle and a ball of yarn to Rosa (who, unlike me, can crochet and made a telephone cover with it), but I’m really pleased with my investment. I’ve been knitting a scarf and it’s provided many hours of entertainment and been a great conversation starter with many people. There’s just something really relaxing and therapeutic about it. 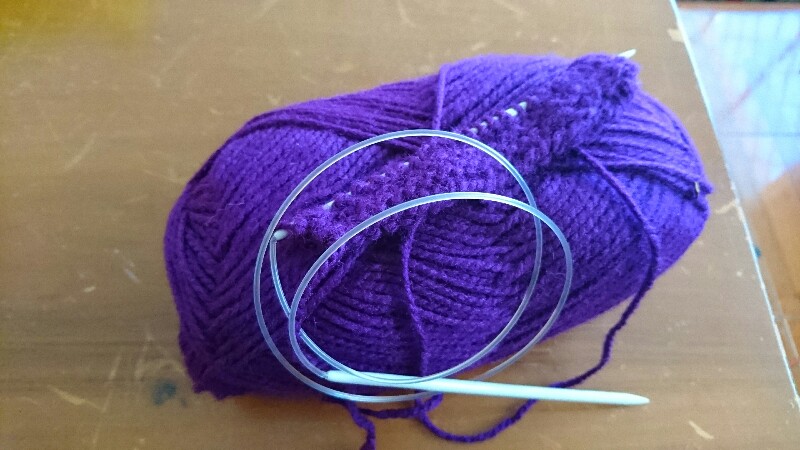 In fact, some of the kids begged me to give them the scarf but I told them that if I gave one of them a scarf, I’d had to give all of them a scarf and it just wasn’t possible to make 27 scarfs in the limited time I have left!

Recent gardening work includes weeding the carrot patch in the vegetable garden and planting spring onions. I actually quite like weeding although it’s quite tiring on the legs because it’s nice to have such visible results of your work – the carrot patch looked so much better once we’d finished.

I also helped a bit with the granadillas by pushing up branches that were growing downwards (the plant is like a vine and they’re all supported by a network of wires) and clearing old leaves and branches.

It’s been raining quite a lot lately. Everything looks so different when shrouded in thick cloud! 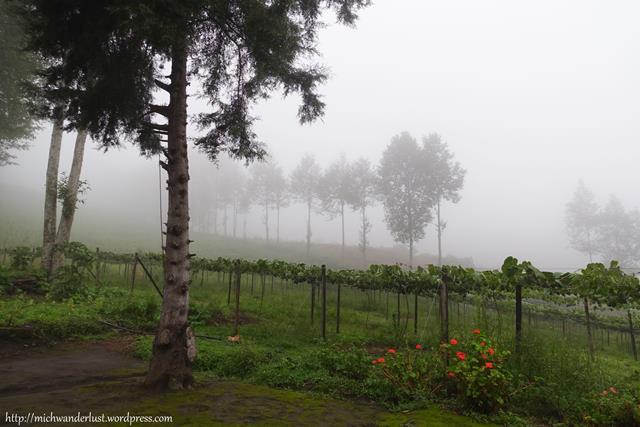 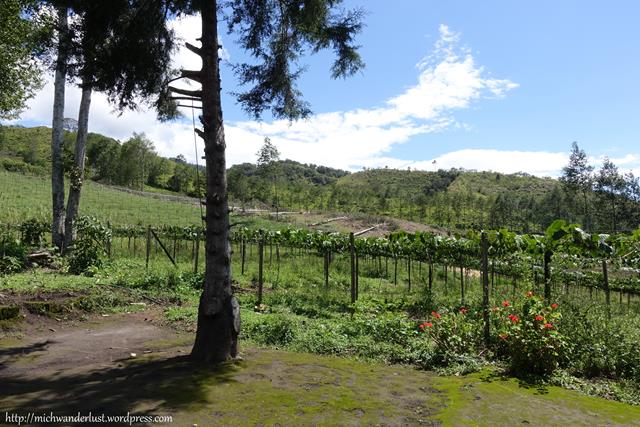 To be fair though, part of the difference is because they felled the trees in the background in the time between taking the cloudy day picture and the sunny day one.

Most of the week before Christmas was spent helping to make props for the school’s Christmas programme. I made angel wings and a star out of nothing but cardboard, paper, toilet paper and paint. I also helped to remove the seeds from balls of cotton to make beards – really hard work!

Going with the Christmas theme, I used the little classroom time I had to get the kids to make Christmas cards. They really enjoyed it. In fact, they like anything arts & crafts-related. Quite the opposite of me when I was their age since I couldn’t – and still can’t – draw to save my life! 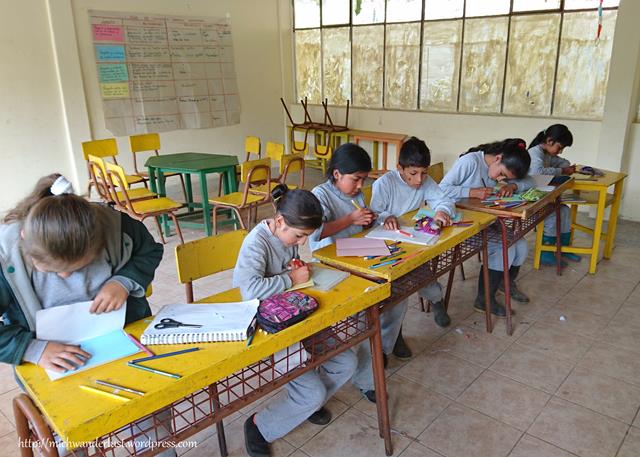 It got a bit tricky when I was trying to give them ideas on how to decorate their cards: Christmas trees and presents are easy to draw, but I managed a Santa Claus head by referring to a photo in my phone. 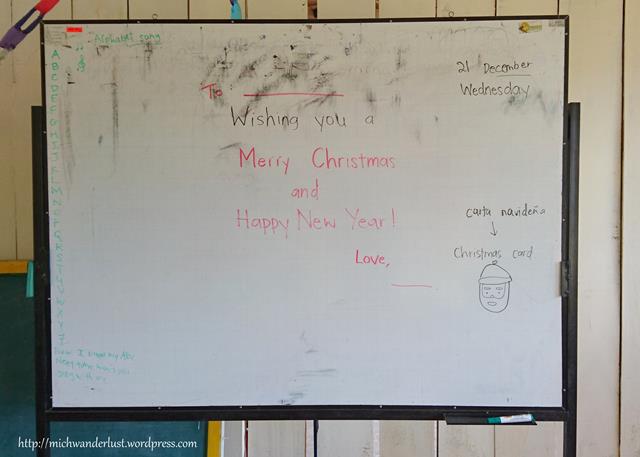 It all went to pieces when I attempted the body, however, so I just left it at that despite repeated requests to draw the body too. 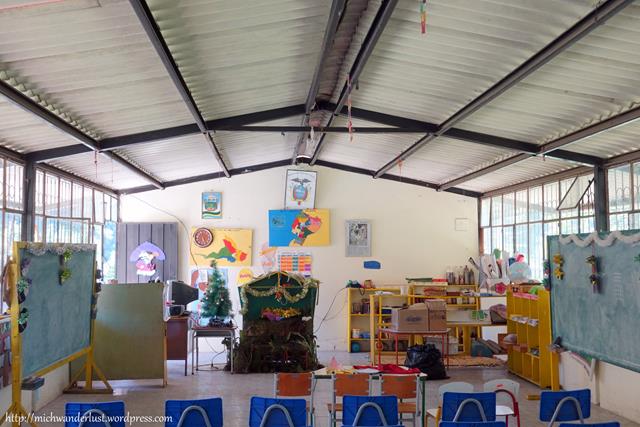 The Christmas programme itself was really enjoyable. It was a series of performances by the kids – some very short plays, dances and songs. 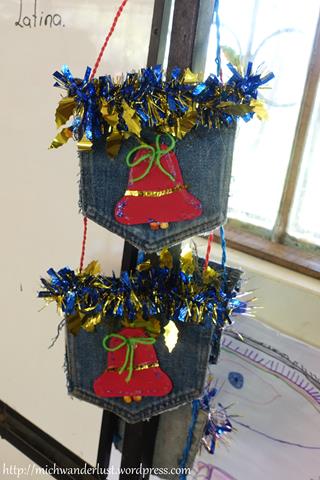 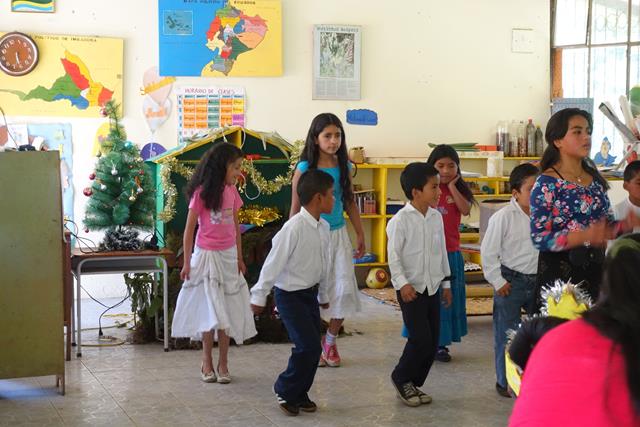 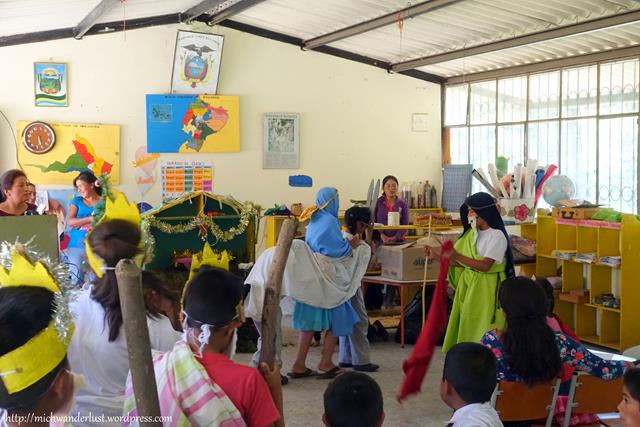 Most memorable for me was the annual “pageant” involving the 1st-grade girls. Since there are only two of them, it didn’t take as much time as you might think, but there were multiple rounds and multiple costume changes. There was even a short Q&A session (completely rehearsed), with questions like “what does Christmas mean to you?” 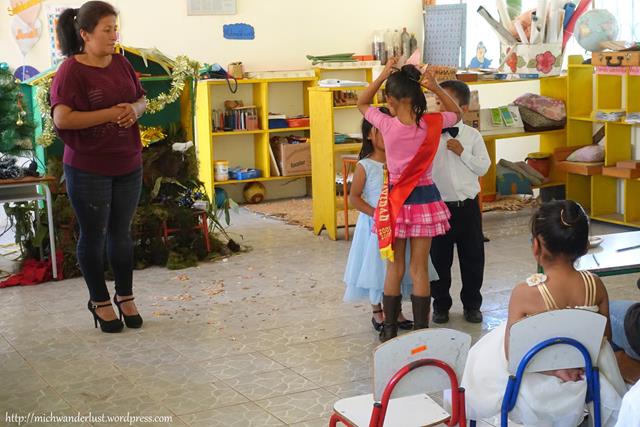 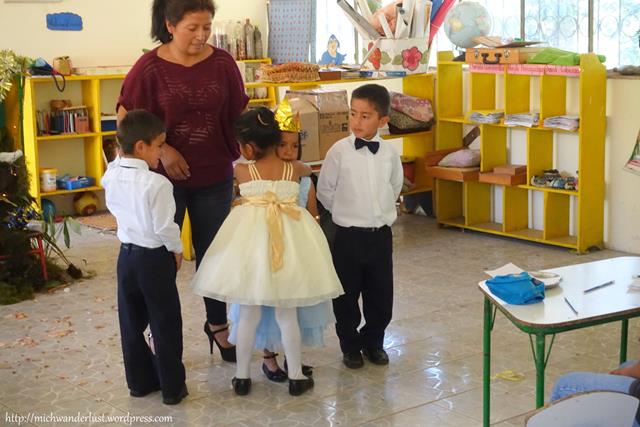 My contribution was the 5th to 7th graders singing “We Wish You a Merry Christmas”. I’d taught all the kids this song just to go with the general mood in the weeks leading to Christmas, with no intention that they perform it in front of their parents during the Christmas programme – but it was fine. “Singing” might be a bit of an overstatement, however. There wasn’t really any discernible tune despite my best efforts to draw their attention to the musical aspect of the song. However, since I’m teaching them English and not music, I let it go. For that reason, however, I resisted multiple requests to teach them more Christmas songs – just imagining it was painful.

The day ended with the kids all getting goodie bags (I got them too, yay!) and some food brought by the parents: potatoes, tostados (toasted corn kernels), chicken, Coke and cake.

It was a pretty sweet (literally) way to end the pre-Christmas activities in Rosario before heading off to spend Christmas in Quito – and after that, the Amazon!