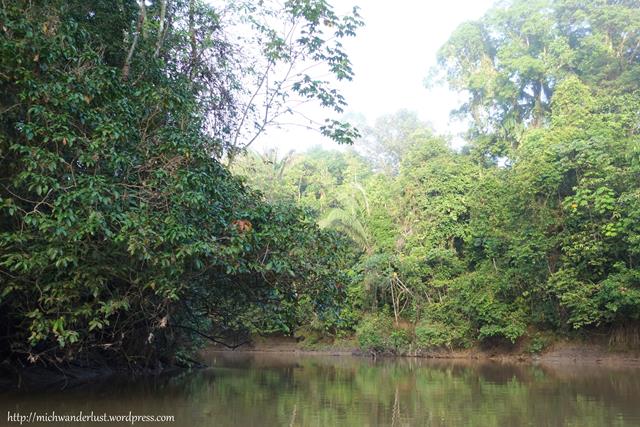 My first trip to the Amazon was on a 4-day tour with Nicky Lodge, their standard tour. The itinerary was quite packed, but I left feeling like I’d gotten a real feel for the largest, most diverse tropical rainforest in the world.

Our days started really early, waking up at 6am in order to be ready for a canoe excursion at 6.30am.

I usually wake up before 6am, so it wasn’t a problem. Although I wasn’t able to do anything more than grunt an acknowledgement when our guide came around and woke us up with a cheery “Good morning!” 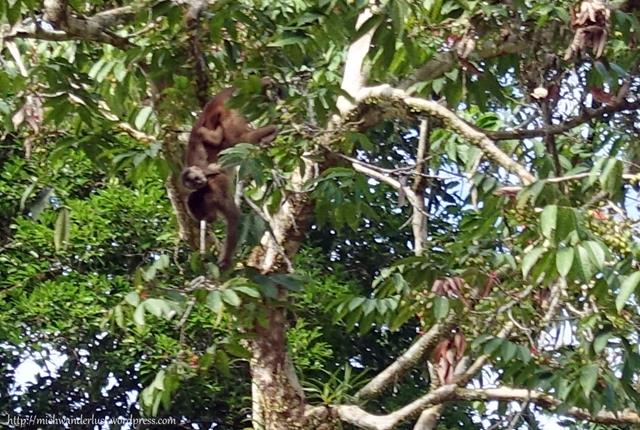 I rapidly discovered that it’s incredibly difficult to take photos of wildlife from the canoe. You would need an outstanding zoom lens, I reckon, and the canoe needs to be absolutely still.

Don’t get me wrong – I love my Sony RX100iv, which is great for its size. But I’m sorry to report that I ended up with a bunch of photos full of trees, where I couldn’t see what I was trying to capture in the first place.

I noticed that the others (even those with DSLRs) also soon gave up trying to take photos of everything that our guide pointed out, and only reached for the camera when the canoe stopped or when the wildlife in question was very close.

One of many exotic fruits 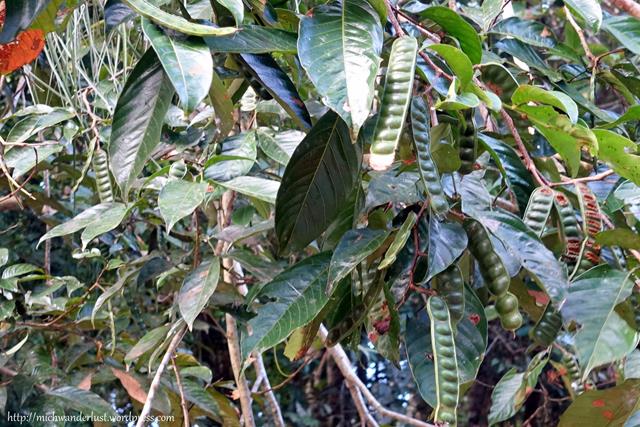 I can’t remember what this jungle fruit is called, but it’s very similar to the Ecuadorean guava (below, not the same as the fruit with the same name in English).

We tried some of it but it wasn’t ripe yet and didn’t have much taste.

In any case, I really liked those early morning canoe excursions – a laid-back and mellow way to start the day.

We got back to Nicky Lodge at about 8.30am, in time for breakfast: a scrumptious spread of empanadas, scrambled eggs, juice, fresh fruits, and bread with jam and butter on the side.

It was then that I realized how much I’ve missed sliced bread! In Intag (where I was living and volunteering), we make bread fairly often but it’s in the form of buns or rolls.

Sliced bread is something else altogether – and it tastes totally different too! I consumed a lot of sliced bread over those few days and kept raving to my friend Linda about how good it was.

After a short break, we went for a jungle walk at 10am which lasted about 3 hours.

It was fascinating. Our guide told us about medicinal uses for the plants, including treatment of diabetes, acne and stomach parasites.

There was also a plant which, according to local wisdom, acts like a natural contraceptive! 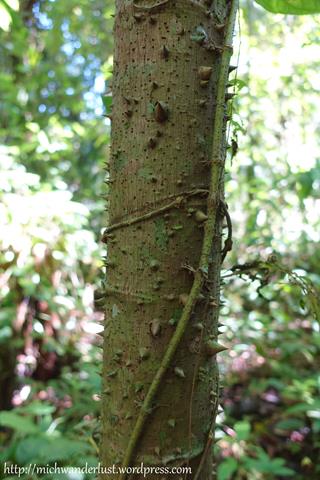 Sadly, it’s quite common for trees to fall down here because their roots are quite shallow. But even when they die, new life springs up rapidly. Check out what’s happened to this tree stump! 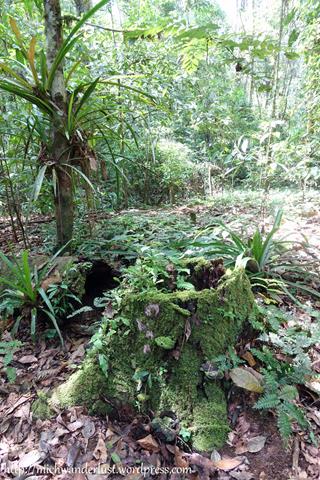 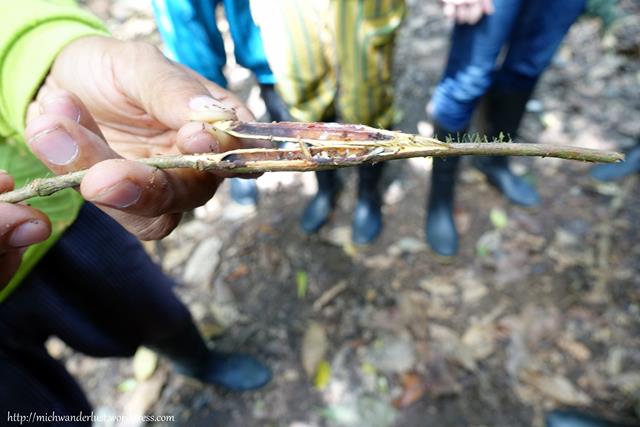 This is a colony of ants living in a particular type of tree, with which they have a symbiotic relationship. You can actually eat the ants (I didn’t, although others in the group did) and they apparently taste a bit like lemon!

And if you’re ever lost in the jungle and need some fresh water: 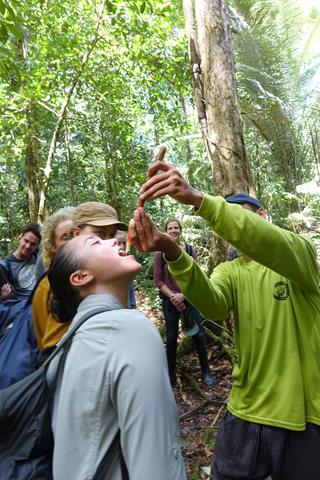 Life in the jungle is not easy 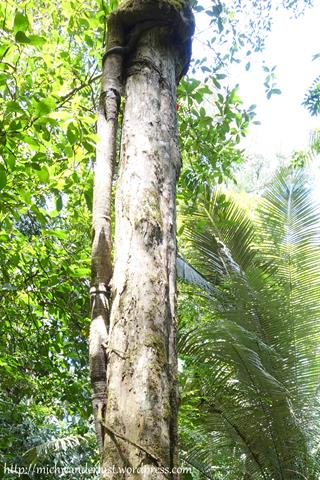 Above is a parasitic tree growing on (and slowly choking the life out of) its host tree. It’s a tough world. 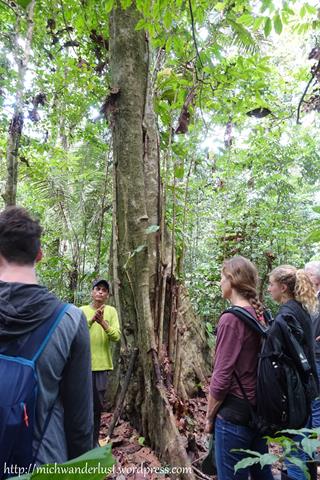 This tree (above) is known as a “jungle telephone” because if you hit the roots with a stick, the sound reverberates for miles. And that’s how you call for help if you get lost in the jungle! 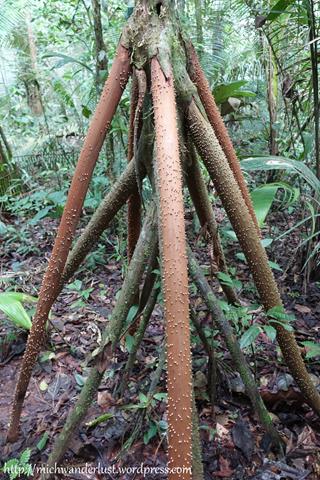 The tree above is known as a “walking tree” because it grows new roots to stabilize itself when it leans in a certain direction, making it look like it’s walking.

A timely reminder to keep your hands to yourself: a spiny palm tree! 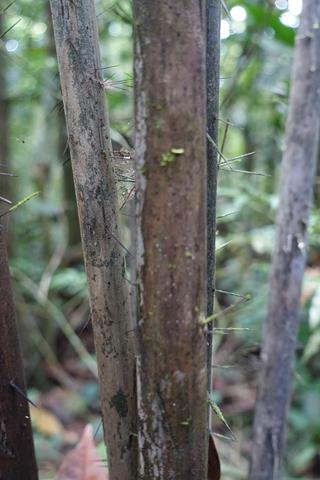 The most impressive tree we saw, though, has to be this 400-year-old tree. It dwarfed everything else. No mean feat considering we were in the middle of the jungle! 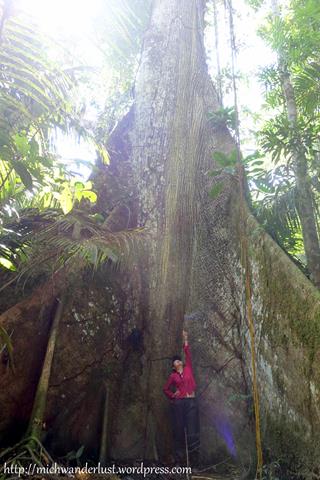 As you’d expect, there’s an abundance of insects in the jungle. And here, everything seems bigger and deadlier.

No snakes were spotted though! I’m not too cut up about it. 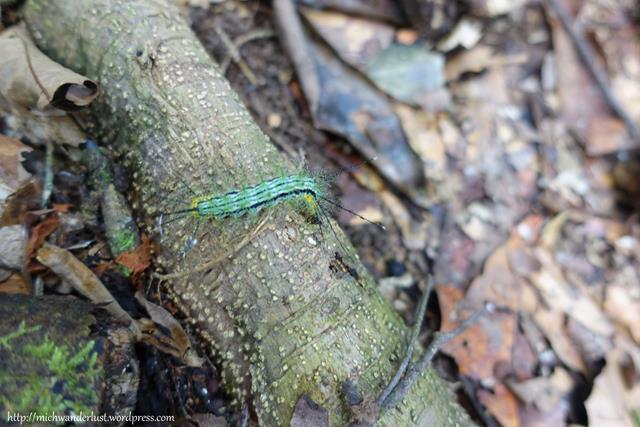 Check out the huge caterpillar below! 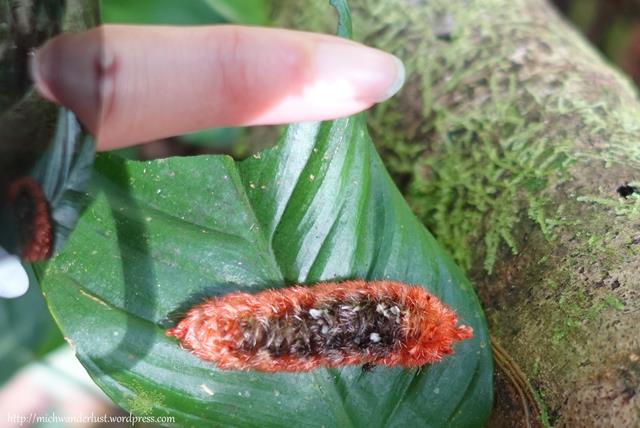 After I took this photo, our guide said that it was highly poisonous. Whoa! Again, keep your hands to yourself in the jungle!

And what about this magnificently camouflaged stick insect? 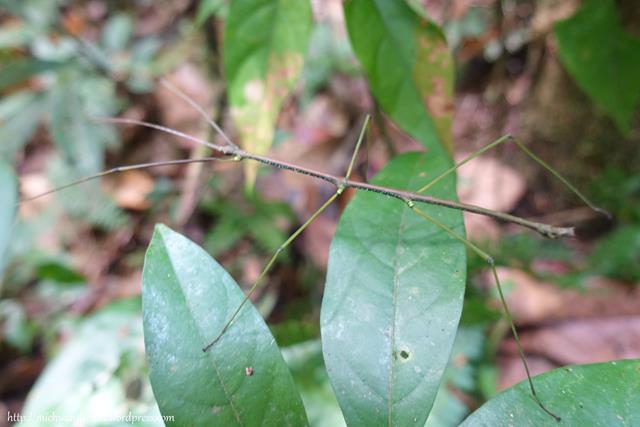 And so many grasshoppers and crickets. Not the kind of critters I seek out on a regular basis! 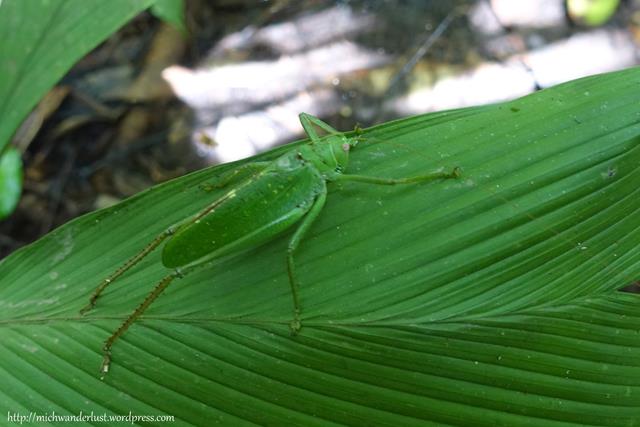 I was hoping to see a sloth but we never did, although we saw plenty of monkeys.

After lunch back at Nicky Lodge, we had a break, during which Linda and I played chess (something which we came to do a lot – a combination of there being a chess board around and no internet!).

Most of the others took a nap or just lay in the hammocks. There was 1 hammock per room and it was so comfortable. I just wish there were more hammocks.

At 4pm we went for another canoe excursion – floating downriver without the motor, which was nice but also had me dozing off. This tour involved a lot of sitting! 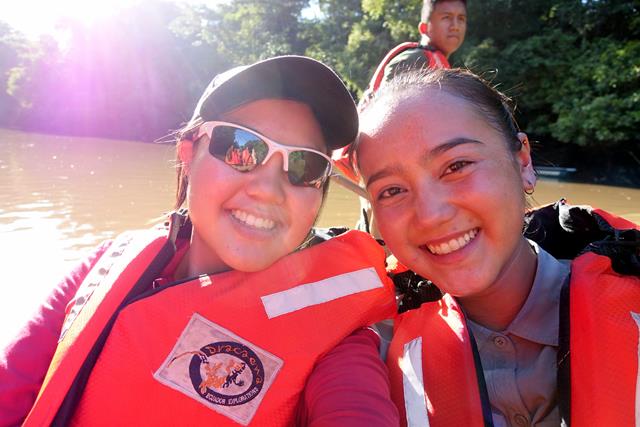 After dinner, we went for a night walk through the jungle. It seemed totally different at night, and the insects seemed a lot more active. We saw huge insects, some of whom were poisonous.

Warning: If you can’t stand large insects, you might want to skip this part! 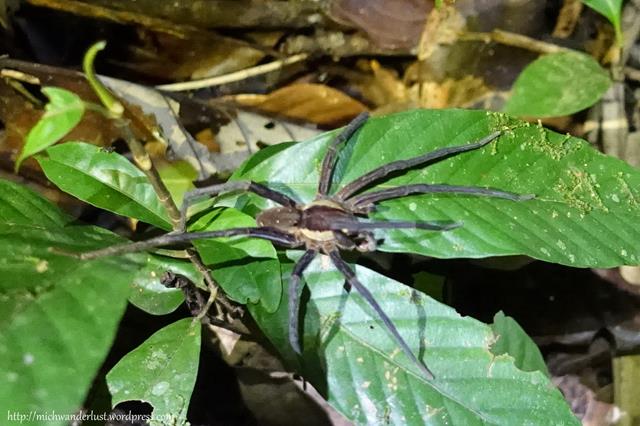 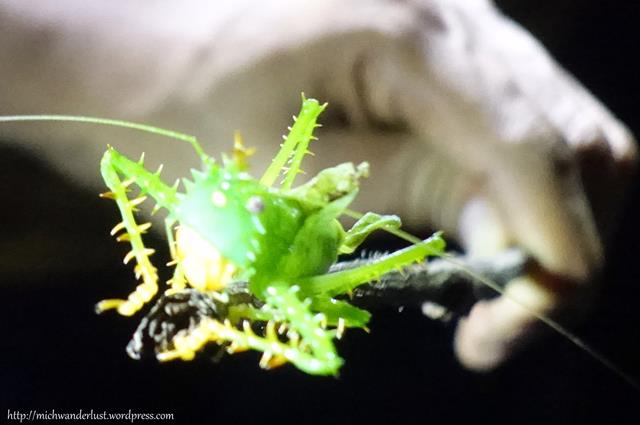 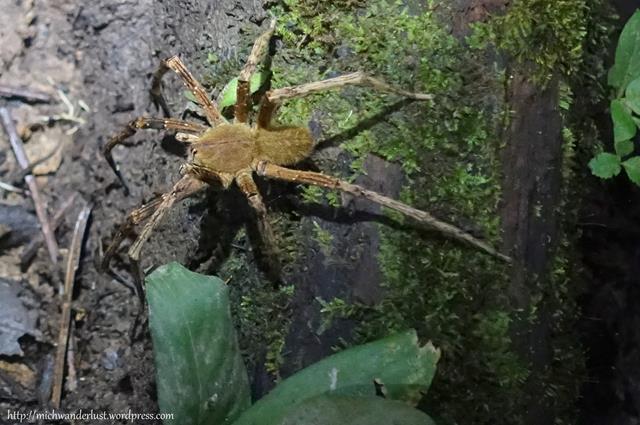 My flashlight came in super handy here, although it’s possible to manage without one as almost everyone had one.

Next up on my Nicky Lodge experience: making yuca bread with an indigenous community and enjoying a gorgeous sunset.

Have you ever been to the Amazon? What did you like most (or least) about it? 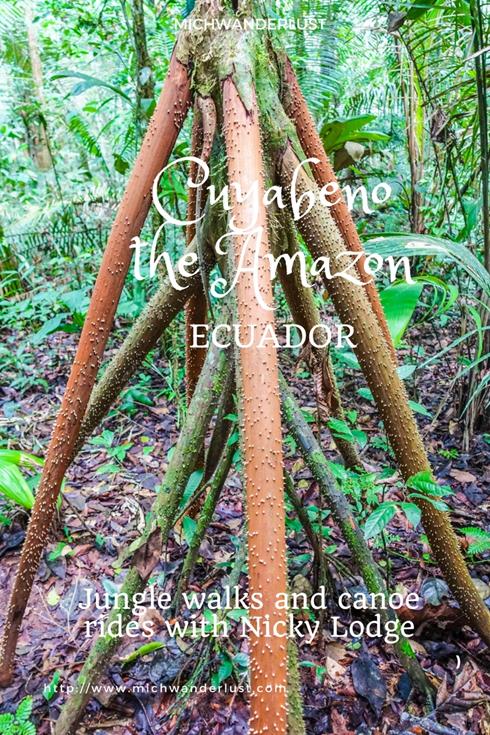