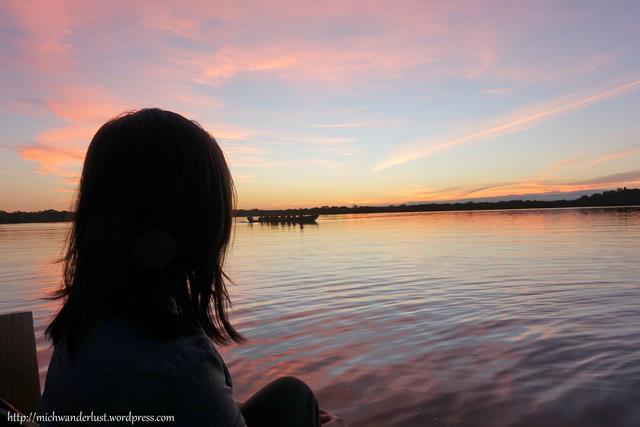 On the last full day of my 4-day Nicky Amazon Lodge tour, we visited an indigenous community, made cassava bread and enjoyed a beautiful sunset over a lake. (Check out the events of Day 1 and Day 2 if you haven’t already!)

In the early morning canoe excursion, new sightings included a tiger heron (so called because the juveniles look like tigers!).

Also spotted: a tiny hawk and some fishing bats (photographing wildlife in the Amazon is tricky, as I’ve discussed here). Bats always scare me, not least because I’m worried about rabies. (I’ve taken the shots though!) 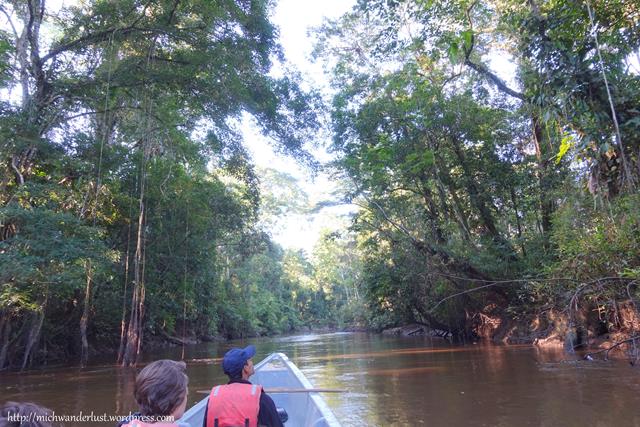 After breakfast, we visited an indigenous community about 10 minutes downriver. Here, in this tiny community, time doesn’t seem to move at the same speed it does in the outside world. 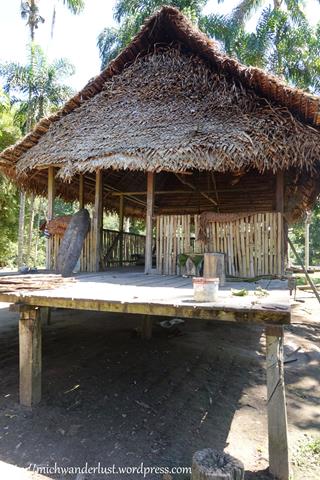 The Siona people traditionally use this blowpipe for hunting – you blow an arrow out of the pipe. Trickier than it looks! Here’s our guide demonstrating how to use it: 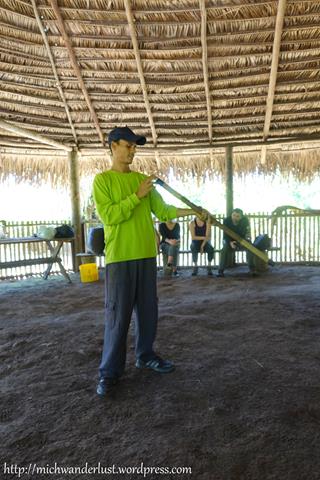 I recognized some of their crops from my time volunteering in Intag – yuca (cassava), corn and papaya.

The yuca grown here is much bigger than that which grows in Intag, though. I was astounded at how big these yucas were! Our guide said that these were normal-sized, and could get even bigger. 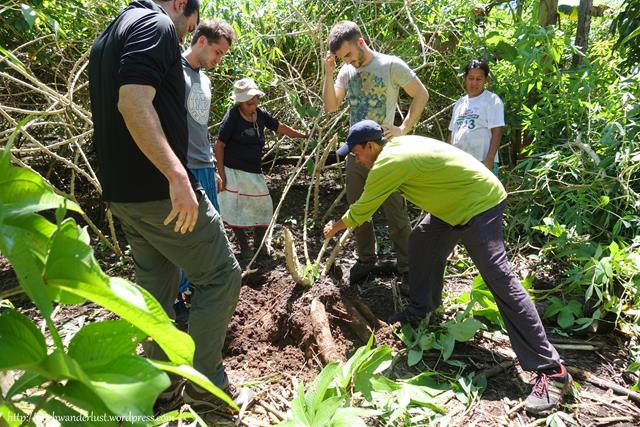 It’s incredible how much bigger they grow in the hot and humid climate of the Amazon, as compared to the cloud-forest of Intag.

With the yuca that our tour group harvested, we made pan de yuca (yuca bread) with the villagers, which basically involved: 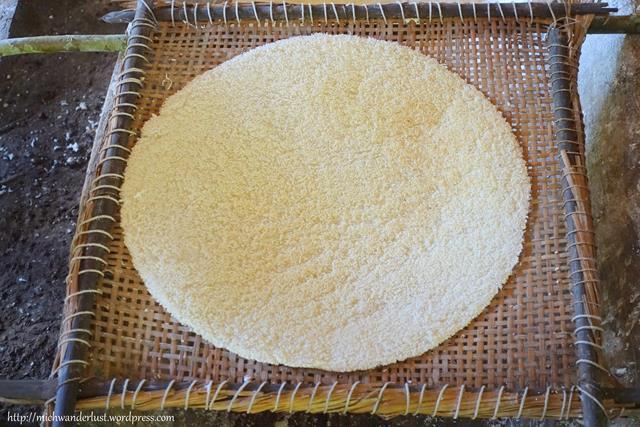 The taste and texture was similar to rice cake. It doesn’t have much taste on its own, but we ate it with salad, jam, chocolate sauce, etc.

I bet it could be done in Intag as well, but I don’t know how to squeeze the water out of the yuca without the apparatus of woven fibers.

The villagers also sell some handcrafted bracelets for sale at $2 or $3 each. The beads are seeds of plants grown here and the string is made from a plant as well. I bought a couple – would probably have bought more but didn’t bring enough cash! 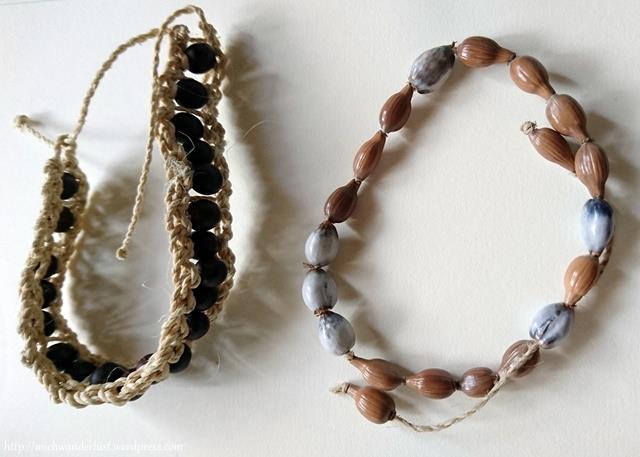 In the afternoon, we went on another canoe excursion. This time, it was to a lagoon to watch the sunset.

We also saw some freshwater dolphins, but all you see is basically a small hump rising out of the water for less than a second. It was impossible to get a photo of them, and it wouldn’t have looked like much anyway.

How I longed for some diving (or even snorkeling) gear at that moment! But visibility would’ve been lousy, anyway. 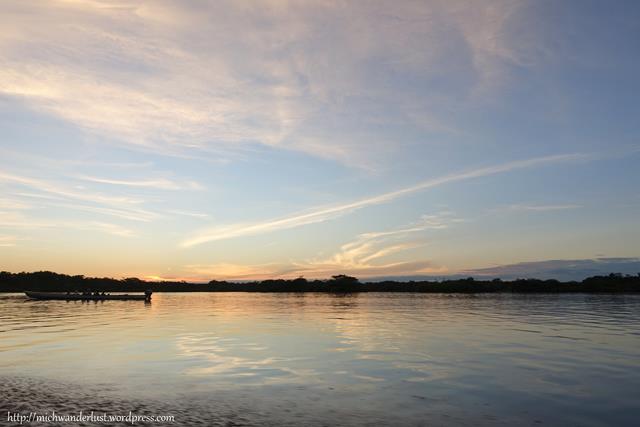 The water was relatively warm but shallow (less than 1m/3ft deep), since we were in the dry season. So we didn’t go swimming, which was completely fine by me as I’d left my swimsuit in Intag. If you visit during the rainy season, though, hopefully you’ll get the opportunity! 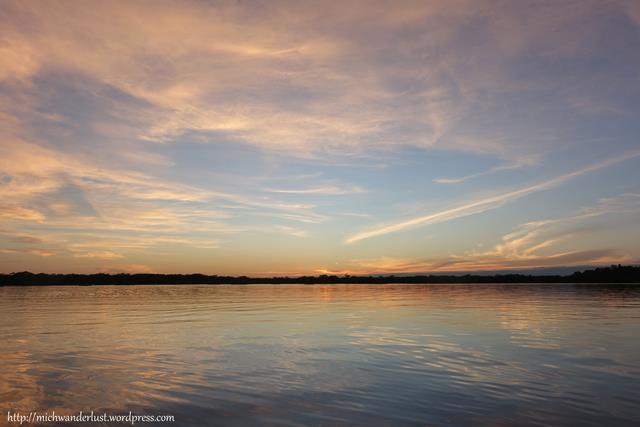 That sunset was gorgeous. There were a few other canoes out on the lagoon, but everyone fell silent as the sun started to set. The sense of awe that settled over us was almost tangible.

Definitely one of my favourite parts of this trip.

After that, we cruised back down the river to Nicky Lodge in the dark and did a little caiman spotting. I’d always thought that caimans were some sort of crocodile, but it turns out they’re distinct from both alligators and crocodiles.

I forgot to bring my headlamp, but luckily enough people did so that I still managed to see a few in the water. You mostly only see their heads, though. We even spotted a small boa!

We got back rather late – at about 8pm – and had another delicious dinner with a bonus: cake for dessert! I can never say no to cake.

I thought that would be it for the day, but after dinner we went for another night walk. This time round, only about half the group turned up. The rest were either tired or had had enough of spiders. (Can you blame them?!)

Personally, I don’t love spiders, but I can put up with them because they eat flies. Spiders in webs are fine – it’s the hunting ones that scare me more.

But big worms definitely creep me out even more! We saw some, and even though I didn’t take any pictures, I think they’re seared in my memory forever. 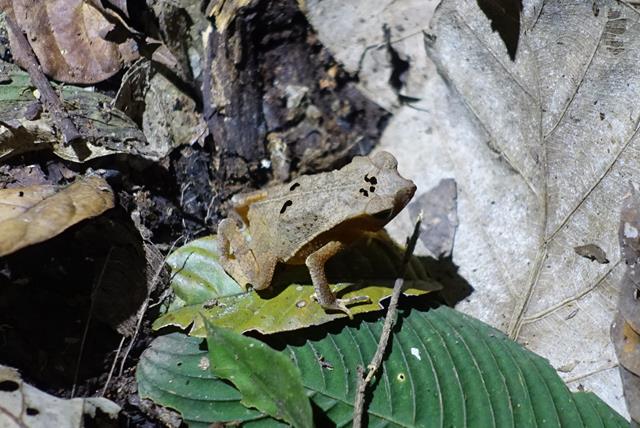 Leaf-cutter ants carrying their leaf bits to their nest: 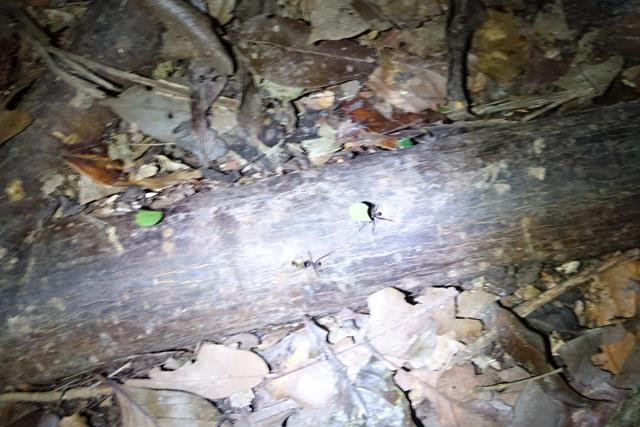 Yet another humongous spider: 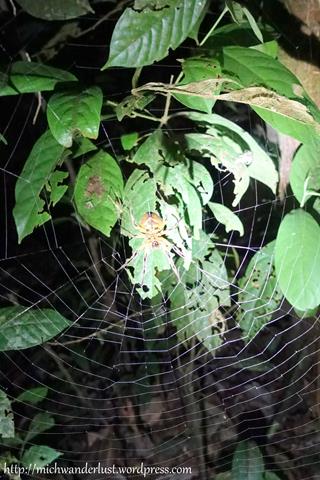 After that, my friend Linda and I spent some time star-gazing again. We were determined not to leave Cuyabeno without catching a shooting star. And we were rewarded with not one, but two shooting stars!

In our last early morning canoe excursion, we saw two new species of monkeys (whose names I unfortunately can’t remember).

Breakfast was extra delicious with some kind of empanada de yuca – I only recognized it as yuca because of the fibres sticking out of it. It tasted quite buttery and had cheese inside.

I indulged a little in the sliced bread, knowing that I wouldn’t have any more for a while. There was even yoghurt and granola. All things I like!

We bade a sad goodbye to Nicky Lodge after breakfast.

It was another 3-hour canoe ride to the Cuyabeno Bridge, where we’d have lunch and take the bus to Lago Agrio.

I dozed off at times, but Linda was on full alert and spotted some monkeys!

They were a group of squirrel and capuchin monkeys and I got some of my best monkey pictures. Better late than never, right?

The canoe got stuck a few times due to the low water level (less than 50cm/1.5ft deep!) and one of the guys helped to paddle a bit. I was just thankful we didn’t have to get out and push it!

Journey back to Quito

In Lago Agrio, we caught the private bus back to Quito, but there was a hiccup because the bus was overbooked.

I’m still not really sure how that happened but I guess the takeaway is: even if you have a ticket, it still pays to hustle onto the bus. I’ve taken plenty of public buses though along the Intag–Otavalo and Otavalo–Quito routes, and have never had this problem.

The ride back took about 6 hours and involved hairpin turns along the sides of the mountains. The bus driver took those turns so fast that I could feel 2 of the 4 wheels lifting off the ground for a few seconds each time. I genuinely feared for our lives a couple of times!

It didn’t help that we passed a pretty bad road accident along the way.

Linda, on the other hand, slept like a baby through all of this. Lucky girl!

And thus ended our trip to Cuyabeno Nature Reserve in the Amazon – a very memorable trip that was well worth the $280.

Have you ever been to the Amazon? And if not, would you visit? 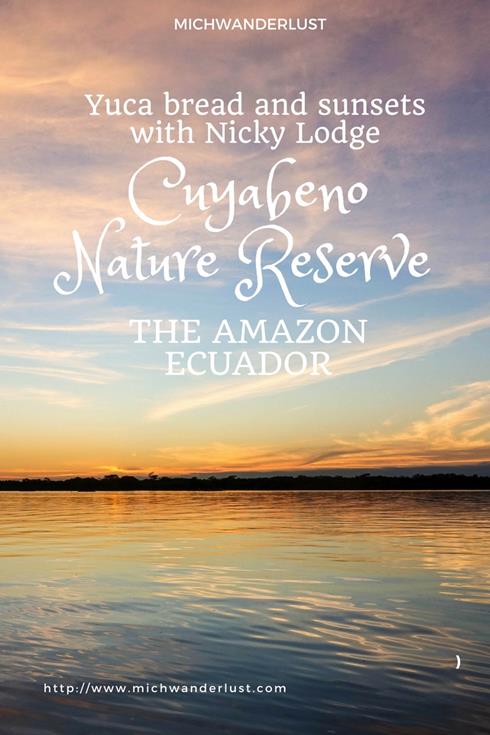