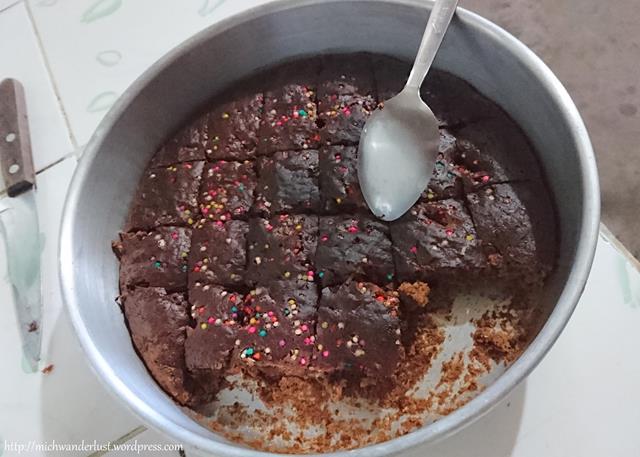 The best laid plans of mice and men…

I arrived back in Quito late at night, fresh from an unforgettable trip to the Amazon, and had planned to go back to Intag the following day (30 December). Unfortunately, by the time I arrived in Otavalo at about 11am, the daily (1pm) bus to Rosario was already fully booked. I hadn’t realized just how many people were travelling to Intag over the New Year period!

In any case, there was no help for it: I was stuck in Otavalo until the next day. I therefore turned up suddenly without any prior warning at Ximena (Rosa’s sister)’s place, asking if I could stay the night. They didn’t seem at all surprised to see me, though. No one even batted an eyelid!

Since I had almost an entire day on my hands, I decided to attempt the brownies at Ximena’s place – in a gas oven this time. I knew it would be a lot trickier because even though there is a temperature dial for the oven, I don’t trust the calibration at all. But you never know until you try, right?

As expected, the brownies turned out nothing like the brownies in Quito – the temperature was way off and we had to cook the brownies for far longer than the 20 minutes indicated on the recipe. It was more like 40 minutes! That said, it was still yummy. Especially so with milk.

(These are actually another batch of brownies I made later on, back in Rosario, but also with a gas oven. The brownies I made in Otavalo looked more like these than the ones below.) 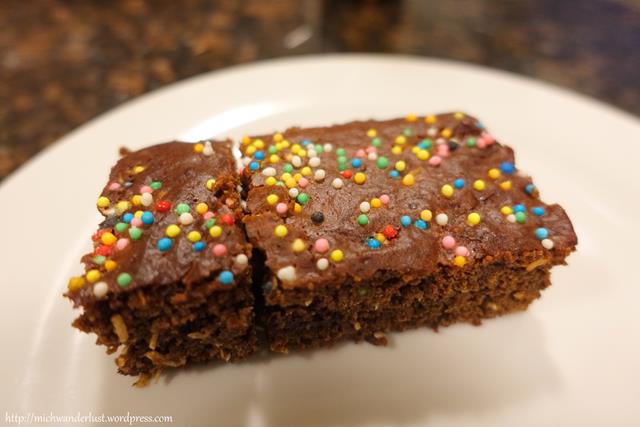 I also went to get some yarn for my host family, and was pleasantly surprised to find that the folks there remember me. I think it was only my third time there, but it was over a span of a few weeks. Asian people like me do tend to stick out like a sore thumb in Otavalo (and Ecuador in general), though. Rather surprising considering the number of chifas (Chinese restaurants) there are!

After dinner, I went with Ximena, Edgar and two of her nephews to a feria – it’s a pretty general term for a market, but in this case it was a night market and reminded me very much of pasar malams back home. They were selling mainly imported stuff like clothes, shoes and some stuff for New Year’s Eve.

Here in Ecuador, New Year’s Eve is a pretty big thing: some guys dress up like women (they’re called viudas or widows), complete with garish wigs and makeup. I heard that in the cities they’re like street performers or buskers and can get quite a bit of money from doing this. People also burn dolls (año viejos) at midnight, to symbolize the end of the old year.

This was all stuff I’d learned about during my first week in Quito, while doing my intensive Spanish lessons with Yanapuma Spanish School, but it was really cool to see it for myself. They were selling the garish wigs and makeup (plus jewelry and other accessories) for the viudas as well as the dolls for burning. My teacher in Yanapuma had told me that people often make political statements with their ano viejos – for example, it could be a likeness of the current president – but all I saw were cartoon-themed dolls.

I had a bit of a scare when some taxi drivers arrived at Ximena’s place to party (i.e. get drunk) – it brought back bad memories of the other night when I lost my battery pack. I have the worst luck with drunk taxi drivers, it seems!

Thankfully, they just burnt an año viejo and didn’t stay long, so I had a peaceful night.

I was looking forward to spending NYE with my host family, as I’d missed out on spending Christmas with them and had promised to spend NYE together as a result.

I wasn’t sure what to expect, though. All they said was that we were going to dance!

That didn’t happen, actually. I went with my host family and some of the extended family (mostly university-age girls visiting from Quito) to a party in a nearby community called Playa Rica, but we ended up just sitting there and watching others dance. I didn’t understand why at the time, but later on I was told that it’s customary for girls to wait to be asked to dance – and nobody asked the girls in my party to dance.

I was pretty happy just watching, in any case – slightly bored, but infinitely better than actually attempting to dance. Ecuadoreans all know how to dance, and in a variety of different styles as well. I wouldn’t have been able to keep up at all.

The others soon got bored, however, so we left after just an hour or so in search of another party. We found another one in Cuellaje, where there was some kind of competition for the viudas. As far as I could tell, it involved dancing, catwalking, singing and generally playing to the crowd. It was definitely entertaining, but again not much dancing was going on.

At one point the girls got tired of waiting to be asked to dance and decided to just go out onto the dance floor as a group – but just as we stepped out, the music ended. It was that kind of night!

Despite all this, I wasn’t unhappy – slightly bored, but entertained enough. I would have stayed until midnight if it hadn’t been for some people smoking near me. We were in the football stadium (not that big though) so there was no breeze to speak of. I tolerated it as long as I could before fleeing to the taxi, where Edgar and the kids were already sleeping. I stayed awake long enough to hear the countdown from inside the stadium and the fireworks being set off (which triggered the car alarms).

And that was how I ended 2016! It was definitely not a typical experience by local standards, though. I know some people partied until 8am, and continued drinking well into the day.

How did you celebrate New Year’s?

[…] decided to attempt the brownies again here – it’s still a gas oven, but this time I turned the temperature up […]