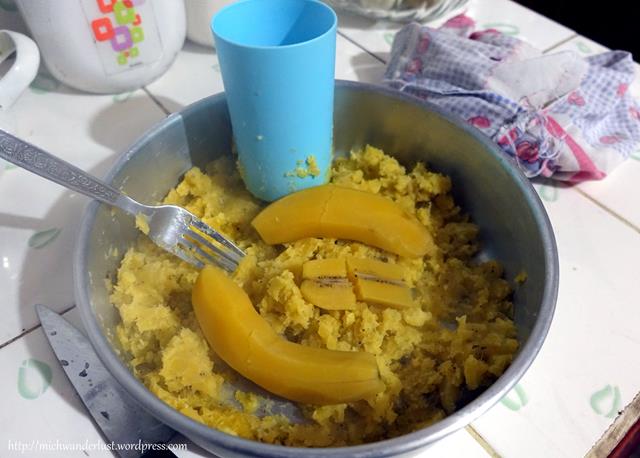 (The school year has now ended, so I’m looking back on my 5-month teaching stint with the benefit of some hindsight.)

The first and second graders were my most challenging class, because the first graders can’t really read or write. A previous volunteer very helpfully left flashcards for animals and parts of the body, which I did to death. I also did colors to death (borrowing their color pencils). My not being able to draw and their not being to read / write is a terrible combination!

Towards the end of the school year, we started on action verbs. They enjoyed acting out the verbs very much. I just called out the verb in question (walk, run, jump, etc.) and then they had to do it. Sometimes I got them to take turns calling out the verbs but that doesn’t work so well because they always asked me how to say it.

I also started making very simple worksheets for the first and second graders, simply because it gave me a chance to rest while they settled down to do it. It was mostly either matching words to pictures or writing practice (copying the same word a couple of times). I then rewarded them with a chop or a sticker when they’re done, and it’s amazing what a difference that makes. In the first couple of months, they’d moan and groan whenever I set them any kind of writing task, but towards the end they actually asked for more writing exercises!

The chops and stickers were a very good investment – all the kids loved them, not just the first and second graders, and it made them very eager to do more writing (like translation exercises) instead of just playing games all the time.

Also worth mentioning is my ad hoc IT consultant status in the school: whenever the teacher had a problem with the (ancient and slow) computers (they’re running on Windows XP!), she called me. I’m by no means any kind of computer expert, and it’s even tougher in Spanish – but whenever there’s an error the default language is English. Just because it’s in English doesn’t mean I understand what the problem is, though!

Thankfully, I was able to solve most of the problems by dint of trial and error and quite a bit of luck (e.g. not being able to connect to the printer and the speakers not working). They have a fairly new laser printer but she couldn’t print much because it was low on toner and toner cost almost $200! (It’s mainly due to the import taxes and transport charges.) She said the school gets no funds from the government (although it does provide the milk and biscuits), although they used to get a few hundred bucks a year. I can’t even imagine how tough it is for her to run a school with so little resources!

The other week, I helped out with some farming work again – weeding some fields of morocho with a machete. It was quite tough because the slope was pretty steep and the weeds were really tall!

One of the kids from school (Patricia’s nephew) helped out as well and gave me these beautiful flowers. 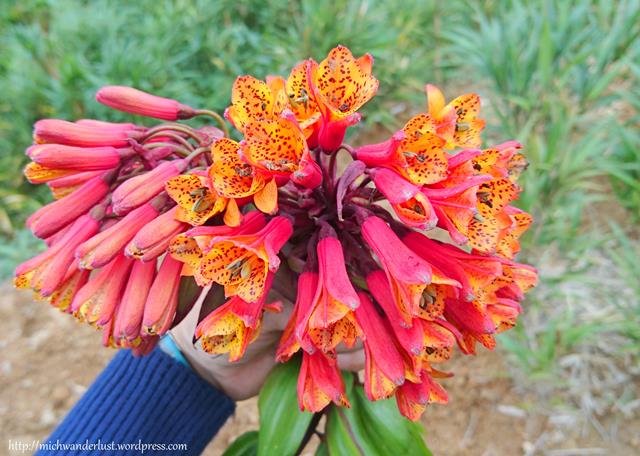 They have a gorgeous garden as well: 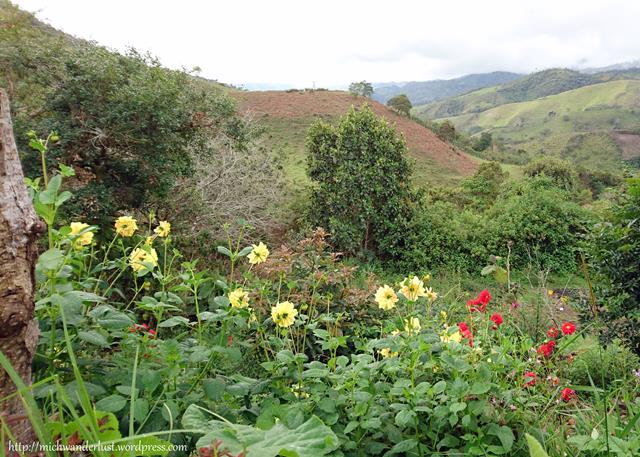 Apuela, for the last time 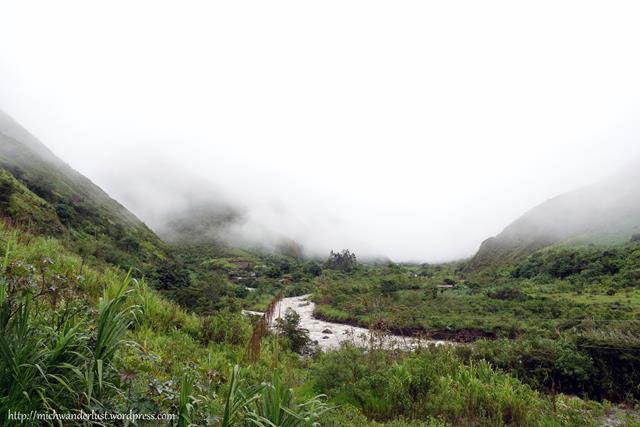 We visited Rosa’s family in Apuela again (for the last time, for me) to make humitas (which I wrote about here). In Rosario, the choclo isn’t ready to be harvested yet but down in Apuela they harvest it more often (she says it grows faster there because it’s warmer).

I hadn’t seen her family for a while and it was really good to see them again. 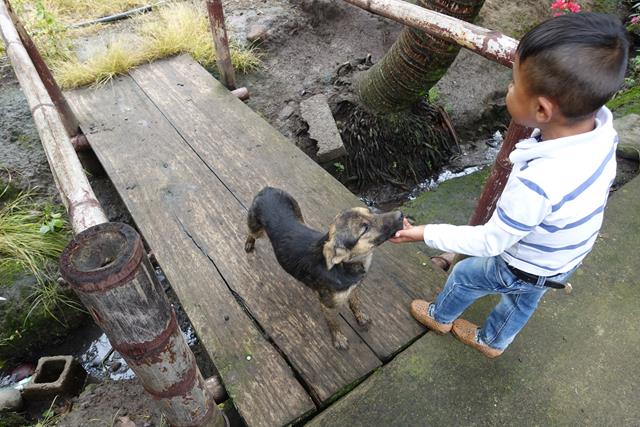 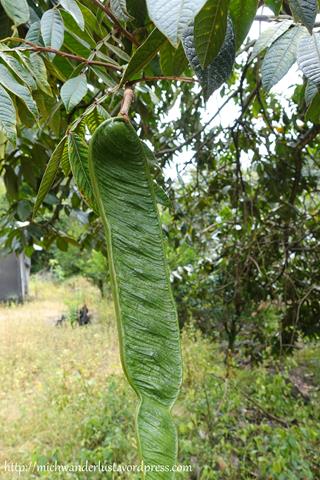 I also managed to squeeze in some alone time by the river. I must have a million pictures of this river by now, but it’s so beautiful I could have sat there happily for hours just listening to the rushing water. 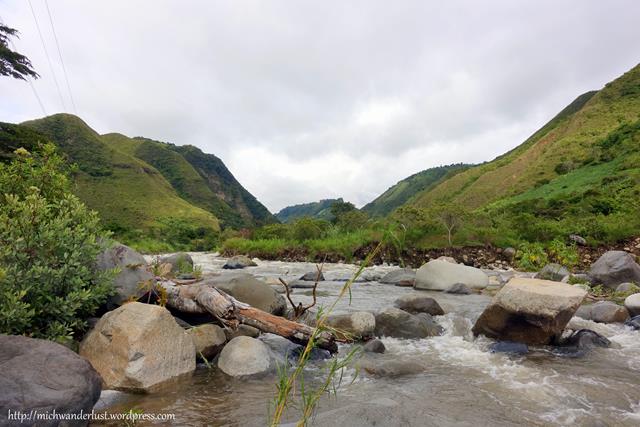 Avocados are a bit of an enigma to me. Back home, they’re treated as something sweet rather than savory: hence, avocado milkshakes (which I can’t get enough of and are pretty high up on my comfort food list). Here, they’re treated more like something savory, so you eat them with rice (but you also eat fried banana slices with rice) and even with soup! They’re surprisingly good with soup, although I think many people back home would balk at the idea.

I made avocado milkshake one day (one big avocado, 1 and a quarter cup of milk and 3 tablespoons of honey). It turned out really sweet but I still enjoyed it. My host family, on the other hand, didn’t like it at all. They thought it was very weird!

They did like something else I introduced to them though: almonds! I was really surprised when I found out they had never heard of almonds before, and resolved to buy some almonds for them to try.

Even though I’ve been here for 5 months, I’m still discovering new food. The other day we had caldo de huevo which was a bit like soft-boiled eggs (which I love) cooked with spring onions and other stuff. We had it with yuca and it was really good. I also tried mote soltera which was mote (boiled corn) and one egg but had a similar taste and texture to the caldo de huevo.

Colada de platano is also new to me. It’s a bit like a banana milkshake, but sweeter. You can only use a certain type of plantain to make this colada.

We made majado one morning for breakfast. This requires yet another type of plantain, and involved getting up at 4.30am because we needed to boil them for over an hour! First you peel them, then boil them, then mash them (in this case with a cup!) and fry some onions.

Finally, you mix the mashed plantains and onions together over heat and there you have it! Majado. 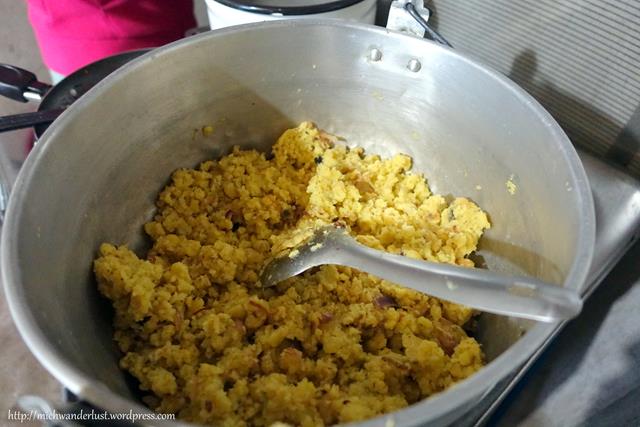 We were done by 6.30am, so it took about 2 hours in total. Cooking is really time-consuming, isn’t it? It’s fun though.

A (relatively) old favorite of mine are these rosquillas. 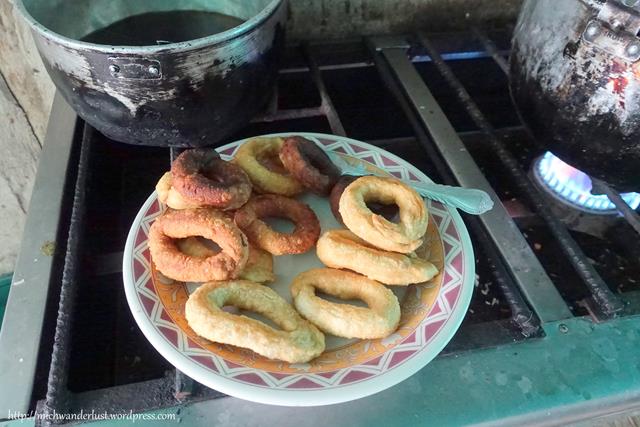 They’re basically doughnuts, and they’re made from the same dough as empanadas and tortillas. The only difference is the shape and (in the case of empanadas) they have cheese inside while the rest are cooked plain. I fried them for dinner once but, like many of my cooking attempts, it went awry. I left them too long and they turned out super crunchy. Oops! Rosa is extremely magnanimous. I’m always surprised that I’m still allowed to help out in the kitchen!