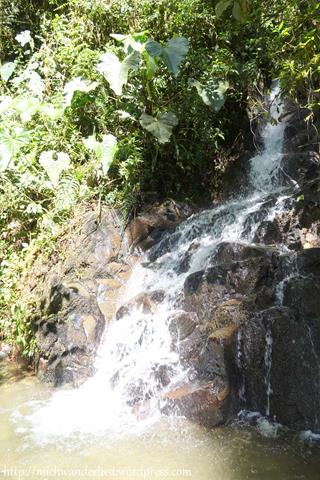 My last week in Intag was a very eventful one: my boyfriend Ian arrived in Ecuador, we spent a couple of days at Ned and Patricia’s, and the next couple of days with my host family – before finally leaving this place where I’ve been so happy for the last 5 months.

We took the bus from Otavalo and got off at Cuellaje, just like I did the first time round. Ned arranged for a taxi (driven by a very friendly woman called Olga) to be waiting for us when we got off the bus, and she took us almost all the way to his place.

Why not all the way to his doorstep, you might ask? Well, the last 20 or so minutes is a hike through a dirt path, only accessible on foot or by horse. And before that, you have to cross a wooden bridge, which most drivers don’t dare to drive across – so they will drop you off before you get to the bridge.

Ned met us near the bridge with his horse (for luggage-carrying purposes), so we didn’t have to lug everything up to his house ourselves. The uphill climb to his house is definitely a great cardio workout though!

Patricia welcomed us with this delicious dinner: 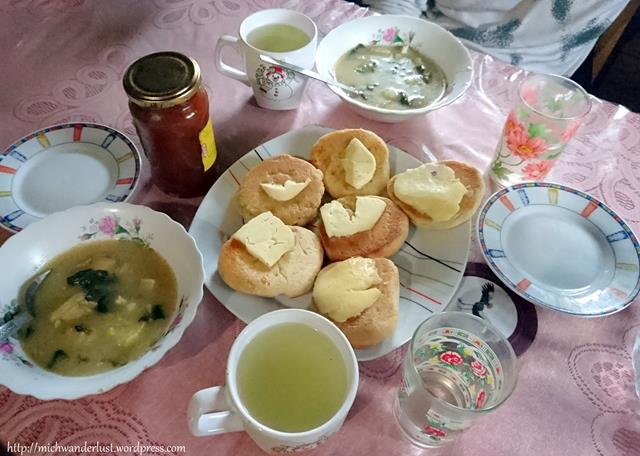 That’s soup, freshly home-made bread, home-made cheese and home-made jam from a very sour fruit (I can’t remember the name – but she puts lots of sugar in the jam so it’s actually pretty nice!).

We had the same bread for breakfast the next day and (as always happens with Patricia’s cooking) I ate way too much of it!

After that, we went with Patricia to milk the cows – although in fact she did all the milking. We just watched and helped mind baby Andy, who much prefers Ian to me. (He fusses every time I hold him but is perfectly well-behaved when Ian holds him!) 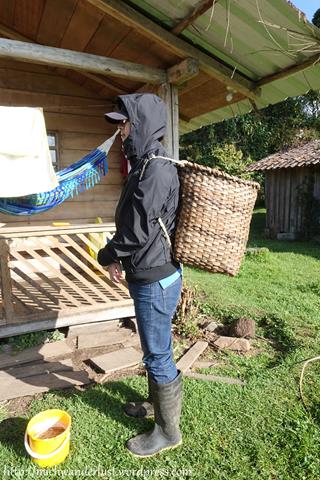 Their dog Benji also came along for the ride. 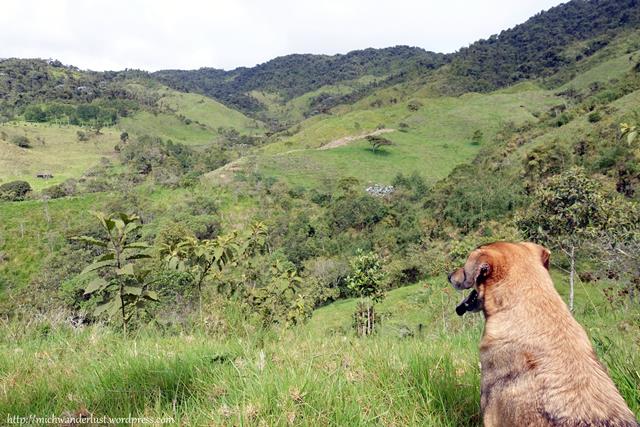 Ian broke out his drone to take a gorgeous aerial video of Ned’s property and the surrounding area. 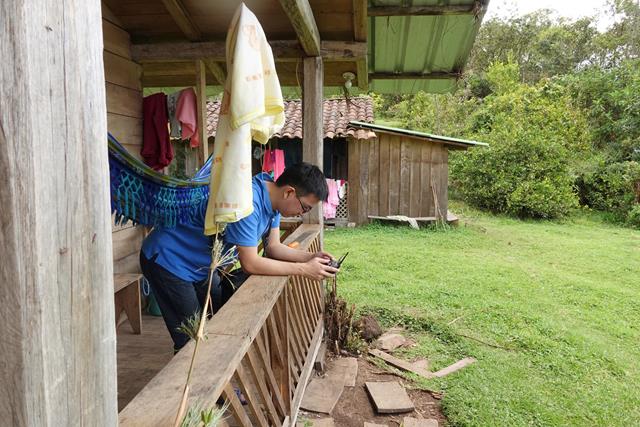 Benji didn’t like the drone at all, though. He was absolutely freaked out! He apparently thought it was a vulture. He doesn’t get along with them at all. He eventually calmed down, though (after Ian put away the drone). 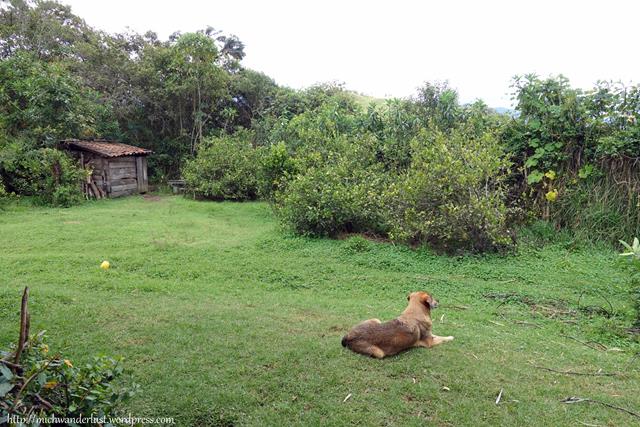 The highlight of the day for me was getting to make bread all by myself. Patricia was busy dealing with an ant invasion, so apart from checking on the dough from time to time, she left me to it. 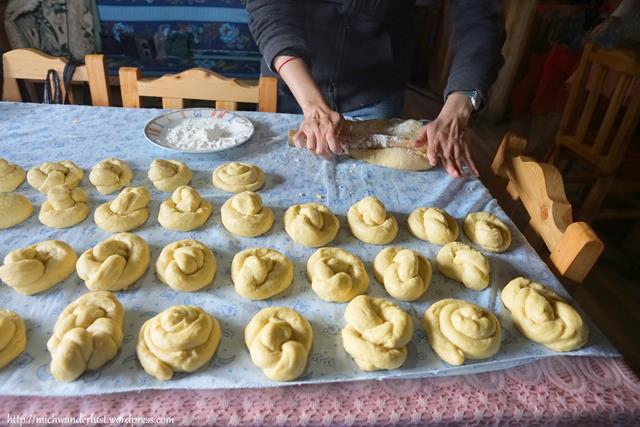 This was my first time making bread with cornflour in addition to wheat flour, and I really liked the resulting texture of the bread – softer and more crumbly. Yum! Patricia made jam from guayaba fruits (guava – similar to, although not exactly like, the kind we get in Singapore) and they went really well with the bread.

I made 41 buns, and there was still a lot of leftover dough, so we made a pizza as well!

This involved rolling the dough to make it thin and flat – I tried to make it circular, but as you can see below, that didn’t really work out. We also added tomatoes, onions, peppers and cheese. 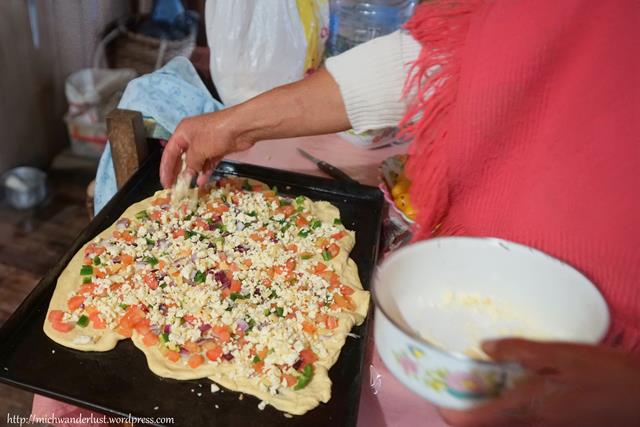 It turned out pretty nice, although it could have done with a little more salt.

Ned and Patricia’s property has 9(!) waterfalls, and I’d already seen the 3 most easily accessible ones, but for Ian’s benefit we did the hike again. 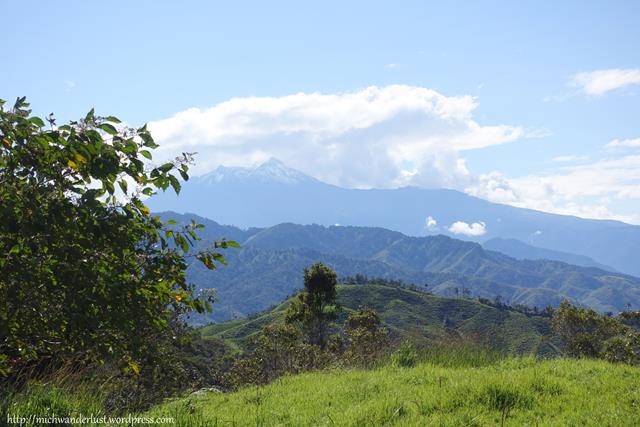 Ian broke out his drone again: 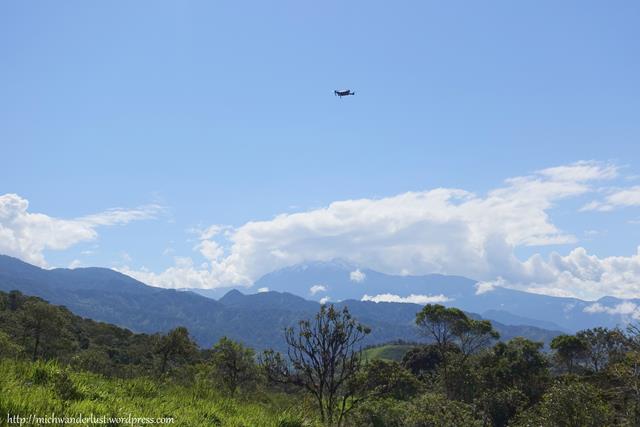 This time the path was less muddy, so it was slightly easier.

We saw a rainbow over the second or third waterfall, but my hands were too dirty to take any pictures (some scrambling required). 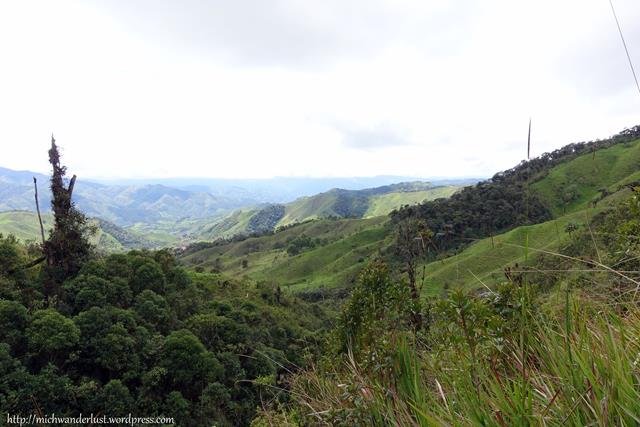 As scenic and peaceful as it seems, the people have their fair share of problems.

All the communities here get their water from further up the mountains, but Ned says they’ve been getting less and less water in recent years – no thanks to climate change, undoubtedly.

Worse, a large part of the region is now being put up for mining concessions, which will lead to a great deal of damage to the environment, including contamination of water and other resources. Not to mention the ugly scars it will leave on this beautiful and pristine countryside.

Those who are opposed to the mining concessions are hoping to convince the government that this region can be put to better use in other ways, e.g. agriculture and tourism. It’s already a fairly productive region agriculturally, and people like Ned are trying to promote tourism here.

On tourism here, my 2 cents’ worth: if you want a truly off-the-beaten-track experience, this is the place to be. I did the Quilotoa Loop after leaving Intag (and I’ll write about it soon), which is billed as an “off-the-beaten-track” kind of place as well (see e.g. this and this). But let me tell you – the Quilotoa Loop is far, far more touristy than Intag. So, if you truly want to be in a place where you won’t see another foreigner for days, even weeks, on end, Intag is the place to be.

Those who are opposed to the mines have a real uphill climb ahead of them. It’s so much easier (and faster) to make money off mining concessions than through agriculture and tourism. It will be a tough sell to the government, but as Ned says, there’s always hope.

So to those of you, dear friends, who care about the environment and this sort of stuff, if you’re ever in Ecuador, I highly recommend a visit to Ned and Patricia’s. It’s the perfect getaway from all the pressures and stresses of modern city life. Not only are you surrounded by nature at its finest – the food is also top-notch, the two of them are just lovely people, and you’ll be making an invaluable contribution to an effort to beat back mining in Intag.

Check out their website here: http://www.cloudforestadventure.com/ for more information.

I’ve written extensively about making quimbolos (and how yummy they are) – see e.g. here and here – but this was the first time making chocolate quimbolos using cocoa beans, rather than instant cocoa powder (the kind where you just add water to make hot chocolate). 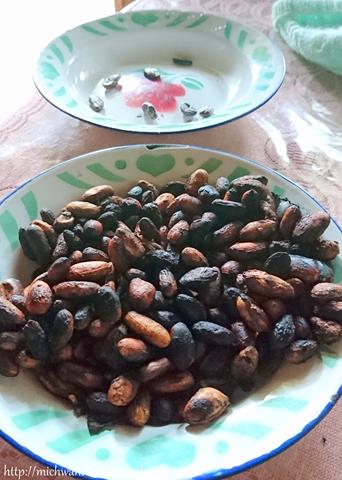 First, we toasted the beans (they’re easier to shell that way), then shelled them – by hand, naturally. Even so, sometimes the shells remained stuck to the seed so we discarded those beans.

Then, we ground them using a hand grinder. Patricia then made a chocolate paste using the resulting powder, hot water and sugar. 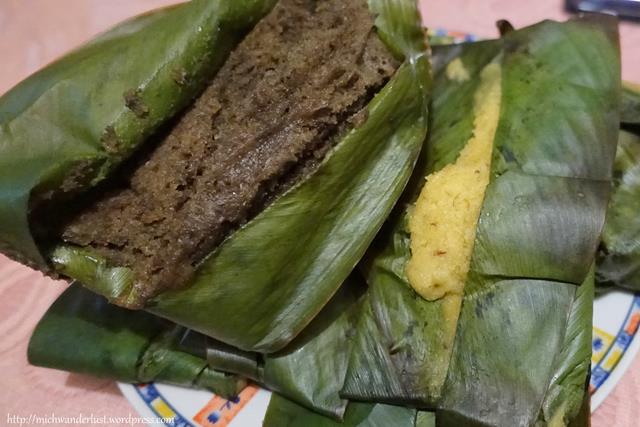 We made both conventional (above, right) and chocolate (above, left) quimbolos. Both types were delicious! I thought we’d made so many that they would last a week, but they barely lasted a day.

The next day, we headed back to Rosario, where we’d spend the next couple of days with my host family and wrapping up the school year, before leaving Intag for good.

Some photos taken by Ian

Such a picturesque place, Michelle! How long did the hike last to the waterfalls?

Hmm about 3 hours there and back, I think! Depends on how long you stop to take photos 🙂 Thanks for stopping by, Agnes!