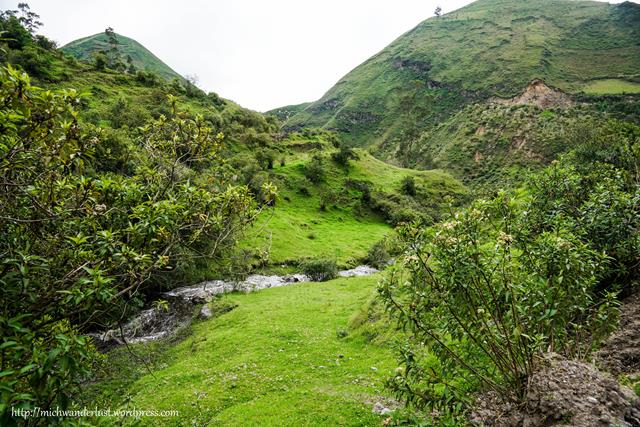 Most hikers on the Quilotoa Loop spend one night at each village on the way. But the great thing about the Loop is that it’s self-guided, so you’re free to linger as long as you want. If you have the time, there are plenty of things to do in Isinlivi.

I don’t know what possessed me to book 2 nights at Llullu Llama Hostal in Isinlivi, but boy was I glad that I had! After a rough day of hiking from Sigchos to Isinlivi, we were all too grateful for the rest day. 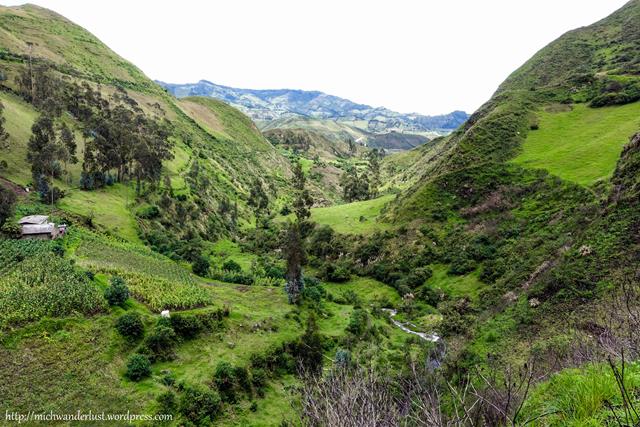 It started with a leisurely breakfast. No sleeping in, unfortunately, as breakfast is served at a fixed time! But it was nice to hang out and chill while most other trekkers started bustling around, packing up and checking out.

We weren’t the only ones staying put that day, though. Some other hikers who had arrived yesterday, like us, decided to take the day off and acclimatise.

It’s an ideal place to rest if you’ve just come from a much lower altitude. Altitude sickness is no fun, guys.

We’d already been in the mountains for a couple of weeks, so altitude wasn’t an issue.

Instead, we flipped through the book of hikes and activities (did I mention they have the most extensive book of hikes?) like it was our lunch menu, and eventually decided to visit the (relatively) nearby village of Guantualo. Pro tip: if you’re looking for things to do in Isinlivi, that book is all you need. 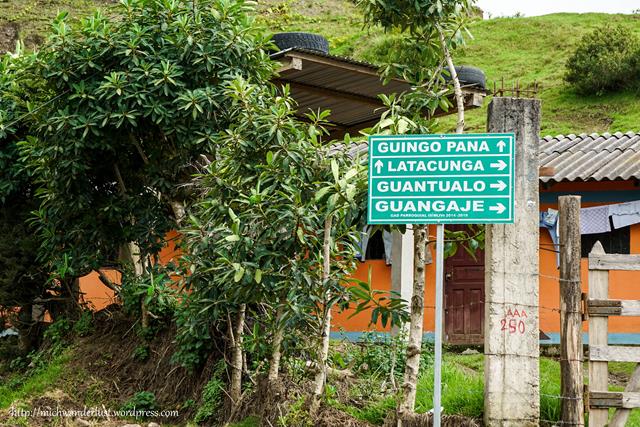 Guantualo is great to visit on Mondays – market day. You’ll see plenty of livestock changing hands, as well as day-to-day stuff like rubber boots and cooking pans. Not your average tourist hot spot!

Naturally (because I’m a genius at planning), we ended up going on a Sunday, so there wasn’t much to see in terms of pots and pans. It was a fun hike nevertheless! 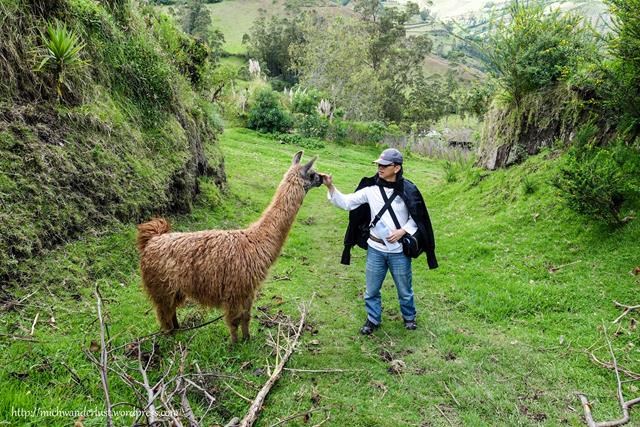 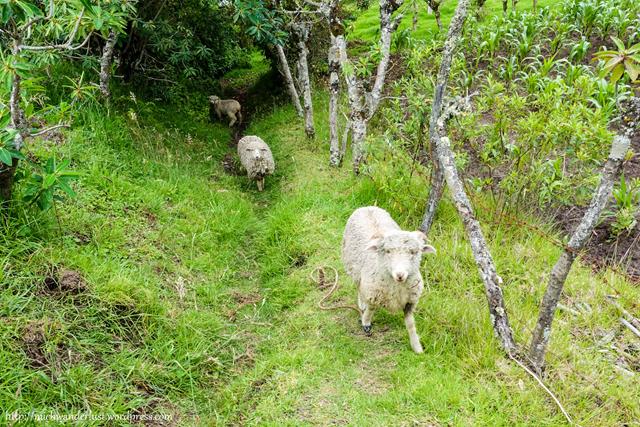 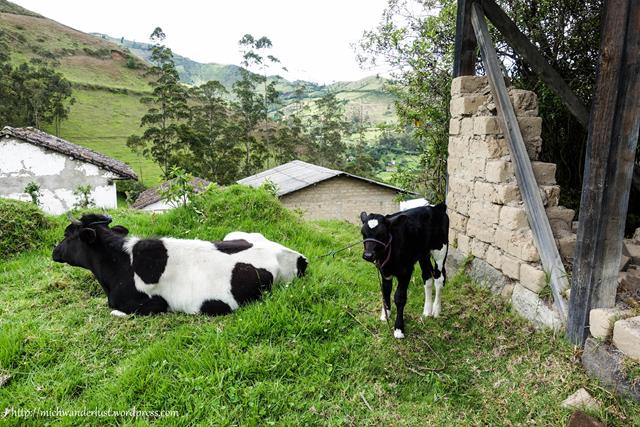 The trail to Guantualo takes you mostly uphill, but then it’s downhill from there. That’s the way I like my hikes! 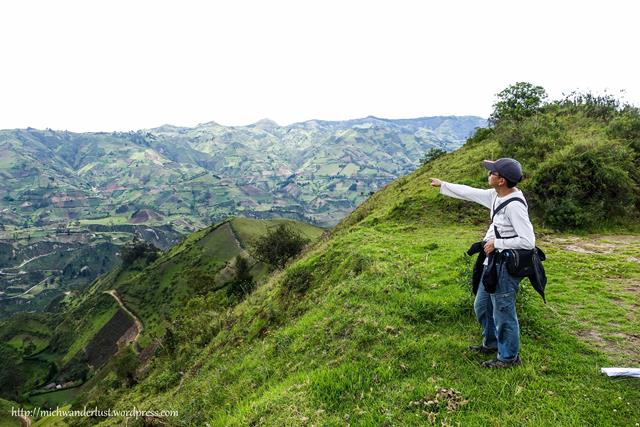 Probably because it wasn’t market day, there was hardly another soul in sight the entire way.

We didn’t get lost this time, though! Not only did we have Llullu Llama’s excellent directions, we also pestered everyone we did meet by asking if we were on the right track (they were very kind, though). If you hike the Loop, be prepared to do this a lot!

After about 2.5 hours, we reached Guantualo. 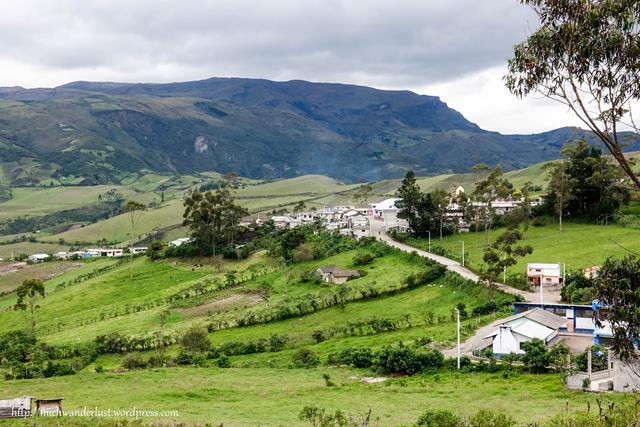 Since it was Sunday, there wasn’t much going on – just a few people looking at us curiously. They probably thought we had gotten market day wrong!

We’d brought packed lunches from Llullu Llama (around USD6, I think), which was actually enough to last us a couple of days.

Apart from a sandwich, we each got a banana, chocolate, sweets and a packet of chifles (fried plantain chips). Those snacks definitely kept me a happy trooper for far longer than I’d have been otherwise!

It was a good thing I’d already eaten when we came across this mountain of rubbish: 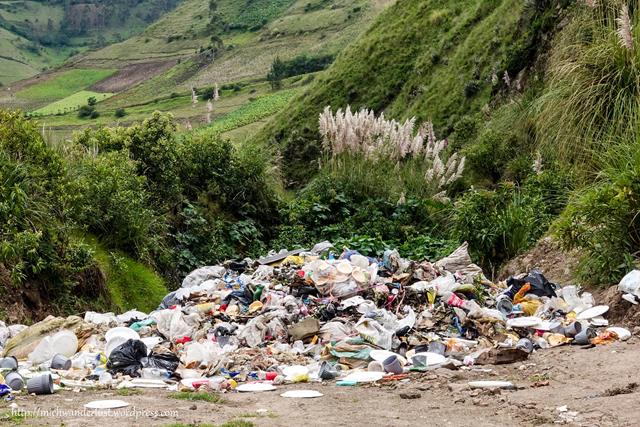 (Don’t say I only show you guys the good side of things!)

Based on my 6 months in Intag, another rural area of Ecuador, I’d guess that they don’t have any official rubbish disposal system – and this is the result. Plastic pollution. The only alternative they have is to burn it.

Plastic is an inextricable part of our modern lives – but we can do so much better at recycling it and cutting down on our use of it. I don’t really know what we can do in these circumstances, though. Any ideas?

The Garden of Rest

As we returned to Isinlivi, we came across a cemetery with this beautiful inscription. 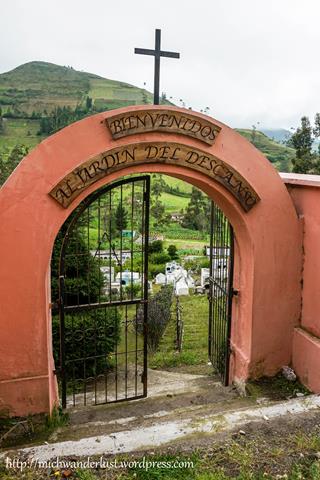 Distance covered: 10km in about 4h30min, including the lunch break. 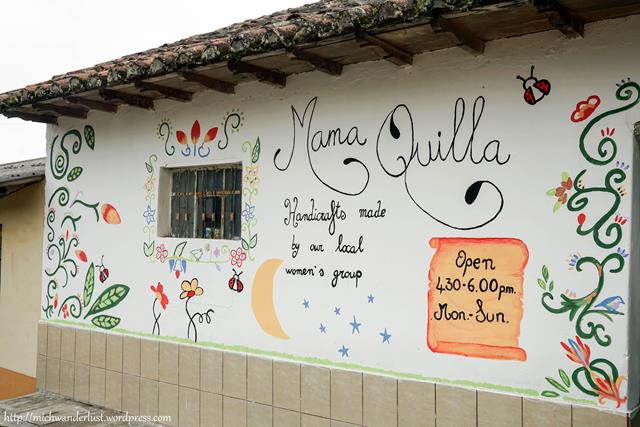 Back in Isinlivi, we visited this micro-enterprise run by a local women’s group. The owner of Llullu Llama had been teaching them how to make candles and soap so that they could supplement their income.

It wasn’t quite up and running yet while we were there, but she kindly let us have a quick look around. 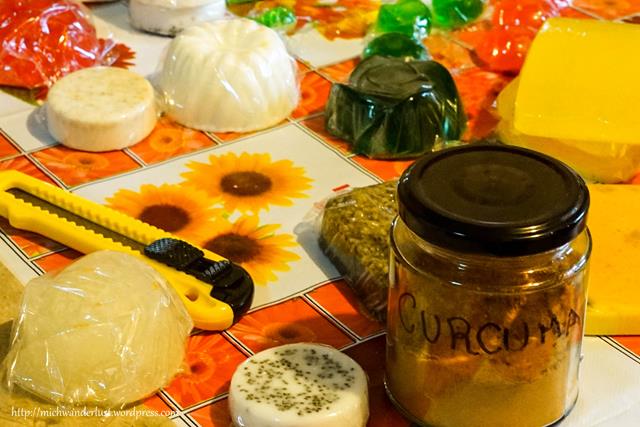 They are hand-made from all-natural, locally-sourced ingredients. No two are exactly the same! See for yourself: 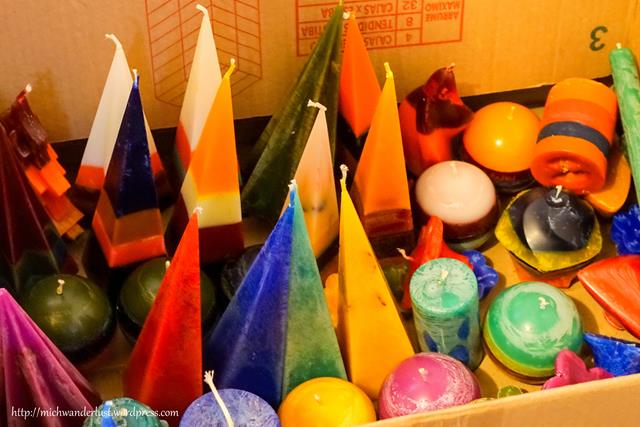 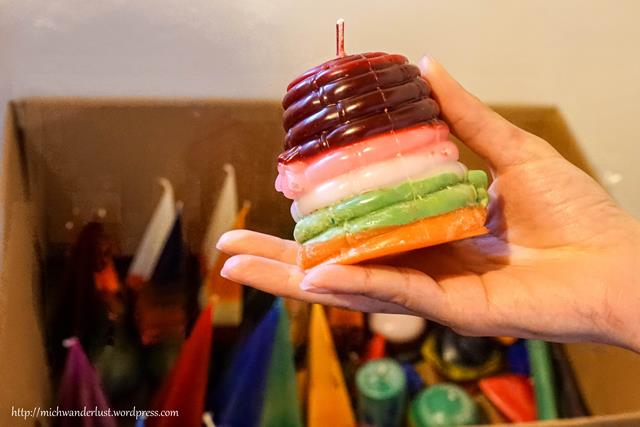 We were told that Llullu Llama would buy some of the soap for their guest bathrooms, which just made us love the hostel even more.

So if you believe in supporting local enterprises and you’re ever in Isinlivi, go on and check Mama Quilla out!

How long should you stay in Isinlivi?

There are far more things to do in Isinlivi than just the two I’ve mentioned above, like myriad hiking routes of all distances and visiting a local cheese factory. So if you choose to visit, you certainly won’t lack for things to do there.

On hindsight, staying 2 nights at Llullu Llama was definitely a good decision.

It was by far the nicest hostel we stayed in on the Loop. It was also slightly more expensive, but at $19 per night for a dorm bed including breakfast and dinner, that’s incredible value for money. 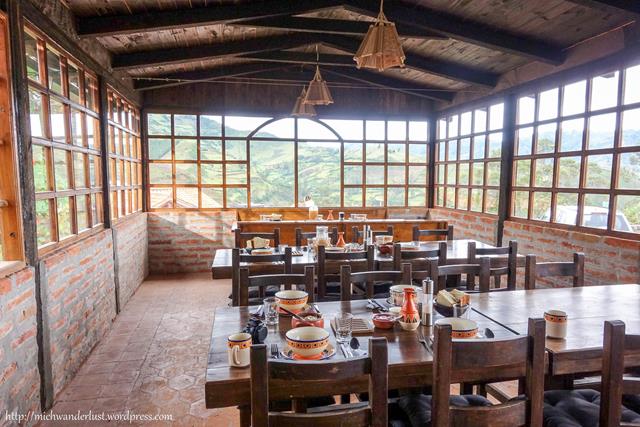 Plus, it’s a great place to chill out if you’re feeling under the weather, want to explore the area a little more, or are just fed up with being constantly on the move.

In short, if you want to spend a little longer in one place on the Quilotoa Loop, Llullu Llama and Isinlivi is a great choice.

Note: We have no affiliation with Llullu Llama whatsoever, save that my husband made a video with his drone footage for them in exchange for 2 packed lunches on our final day. We made no promises to publicise it in any way, but I am doing so because we genuinely enjoyed our time there and would love to share it with others. In case you missed it on my previous post, here’s the video again!

Have you seen plastic pollution or other kinds of pollution mar the beauty of otherwise unspoiled landscapes? What do you think we can do about it? 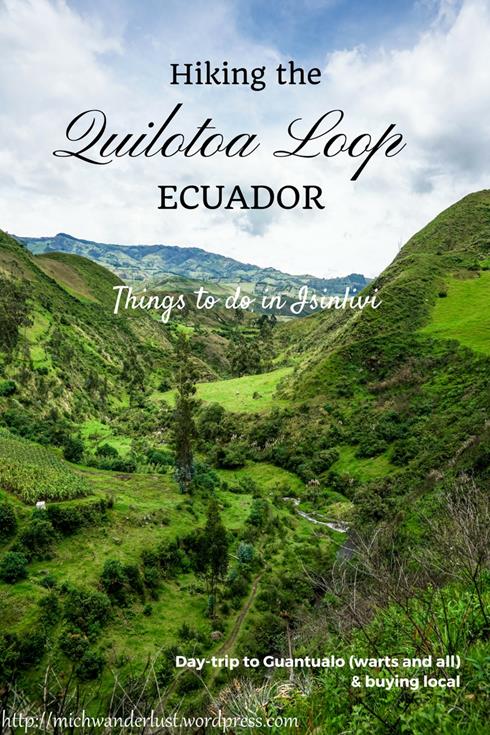 Sounds like a great hike, I loved that you saw so many animals. The trash though is so disappointing. It is a good reminder for everyone to try and reduce the amount of plastic that they use. Thanks for sharing on #TheWeeklyPostcard.

You totally get it! I need to work on reducing my own plastic use too. Thanks for stopping by, Anisa!

All the animals!!! *Heart eyes emoji*! All the trash was so sad to see. Great post!

It really was; such a sad reminder of our modern problems. Thanks for stopping by, Lena!

Seems like a really nice little adventure you had there. I like the idea that they sell handmade candles and soap. I’d probably buy one as a souvenir to help them. And the plastic is a huge problem in many places. My bachelor thesis was about how waste and climate change affect tourism, so I a familar with this problem. I’ve worked in Maldives and they would either throw it in the sea or burn it on a separated island. Both are really bad options. Glad you mentioned this topic as awareness has to be raised about that. Thanks a… Read more »

I probably would’ve bought one too, if they had been open for sale at the time! Your thesis sounds really interesting – is it available online by any chance? Sadly, throwing plastic in the sea or burning it are all too often the only options. I guess a landfill is a slightly better option, but where I lived in Ecuador, they would often burn right just a couple of metres away from other people! Thanks for your comment, Vicki 🙂

I think it’s important to show all the positives and negatives of anywhere to let people know what they’re getting themselves into. That’s a lot of trash but the rest looks pretty amazing! Thanks for linking up with #TheWeeklyPostcard!

Totally agree! It was just that one dump site though, the rest of it was gorgeous. Thanks for stopping by! 🙂

Can you believe how great are those hills and mountains? Sometimes, I forget about those colors (it doesn’t rain that much in California). So bad to see all that trash. I assume the government does not have a plan to pick it up and residents dispose it like that. Hope a better solution is given to residents (in the future). #TheWeeklyPostcard

I tend to take greenery for granted because here in Singapore, it rains A LOT – thanks for the reminder that it’s certainly not the norm everywhere! Yes, I think they don’t have any other way to dispose of it. Hope a proper system is put in place soon! Thanks for stopping by, Ruth!

Looks like a great hike in Ecuador (minus the garbage piles!) – love the animals you saw along the way! ~ Jessica

It really was 🙂 rather strenuous but well worth it! Thanks for stopping by, Jessica!

What a beautiful hike! I love self-guided hikes like this but I prefer well marked paths where I don’t stand the chance of loosing my way. The hike you are describing seems quite long and tiring. It’s good that you decided to take a break to recoup. Ecuador is such a beautiful country! I’d love to visit it someday. #TheWeeklyPostcard

You’re definitely less likely to get lost on well-marked paths! I found that I liked the challenge of figuring out where we should be going and the joy of finding proof that you’re on the right track, though. Hope you get to visit Ecuador someday, Anda, it really is beautiful 🙂

Plastic rubbish always becomes a problem in regions like this. I don’t quite understand if they are able to import the products that come in plastic why they can’t cart the plastic rubbish back out to town to be disposed of.

I guess when small businesses buy wholesale anything, these days, it all comes wrapped in plastic. But proper rubbish disposal systems need to be implemented by the government as I doubt the villagers have the resources to organise one themselves. So they end up “disposing” of it like this, quite unfortunately!

wow! that’s a good value for money 🙂 I have been also before around the 3000m and I didn’t have any issue, but 3800 sounds like much-needed acclimatisation.

You might just be one of the lucky people who aren’t prone to altitude sickness! 🙂 Giving yourself some time to acclimatise is always a good idea though. Thanks for stopping by, Shere!

Owen @ My Turn to Travel

Damn it! I NEED a drone! It looks awesome out in the wilds

Author
Michelle
Reply to  Owen @ My Turn to Travel

Hey Owen – yess it’s pretty cool right! 🙂 It’s crazy the amount of time you need to spend editing the video though (just so you know), haha. There are a couple of smaller drones on the market now (this is the DJI Mavic Pro, but there’s an even smaller one out now), so I’m sure you’ll find the right drone for you 😉 Good luck with the search!